Spy vs. Shy: Life Before & After THE CABLES 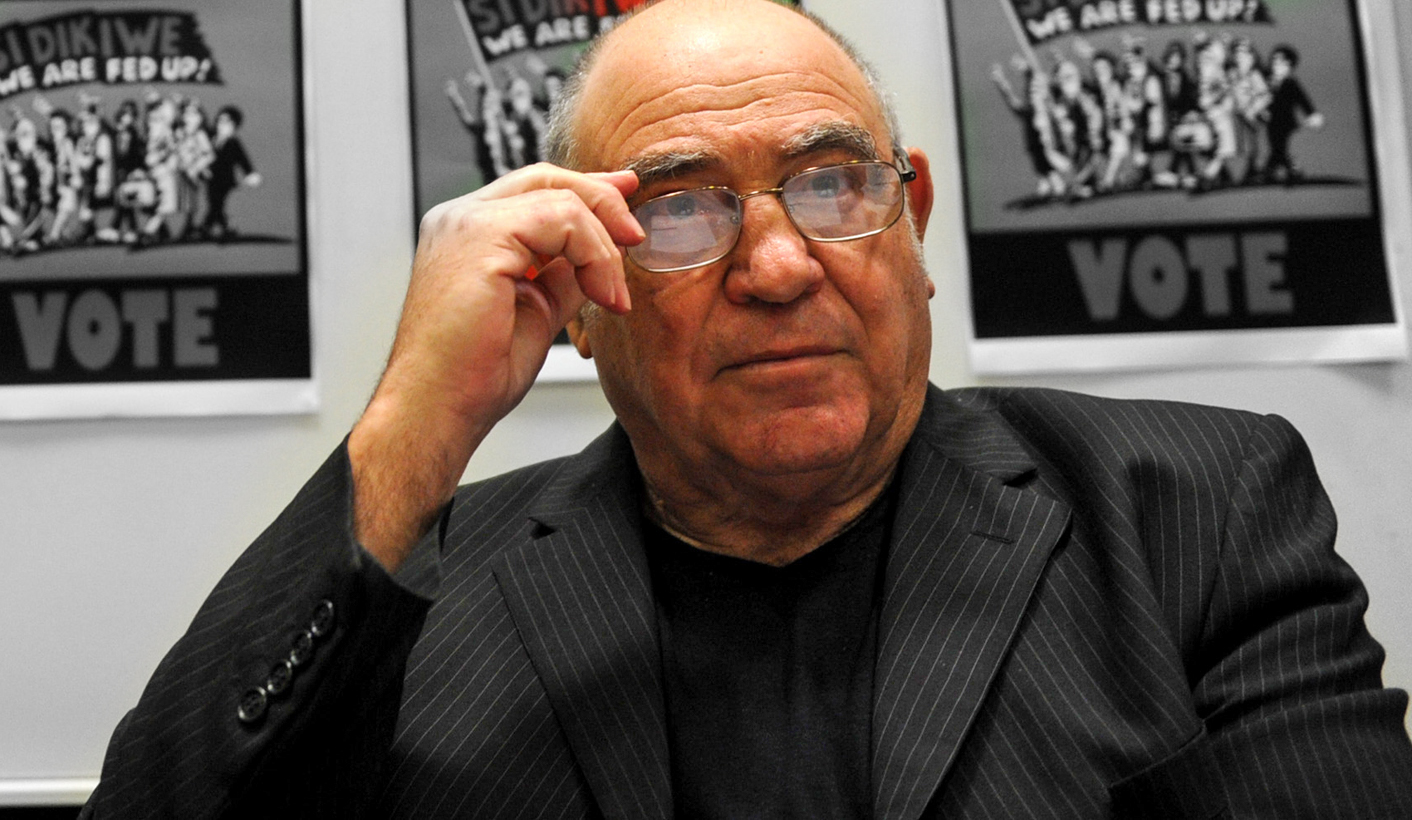 One day—many moons from now—our descendants, if they are free men, will build great monuments in honour of the humble flash drive. A day after Laura Poitras’ Edward Snowden picture Citizenfour won best documentary at the Academy Awards ceremony, another data dump is upon us. This time, the files seem culled from a South African State Security Agency’s (SSA) archives. Who jacked the docs? No one knows yet. But we do know that they’re heavy on Iran and Israel, only days before Benjamin Netanyahu heads to Washington to make a speech before a Republican-led Congress. RICHARD POPLAK spoke to ex-spymaster Ronnie Kasrils in order to figure things out.

This conversation is being recorded.

By that, I mean the one I just had with Ronnie Kasrils. Obviously. The ex-spy chief’s every phone call is likely loud-hailed through the halls of the SSA, his gravelly basso alternating with the James Bond theme in order to keep the local spooks on their toes.

“One thing you must never agree to is being the boss of a spy agency,” Kasrils told me drily. “It’s crap work, I can tell you.”

As far as career advice goes, I’ll take it. One hopes the more ambitious among SSA’s silk-suited super spies were similarly attentive. Clio, history’s muse, remains an expert at excavating the shallow graves dug by spymasters. Kasrils knows this better than anyone, which is why he seemed entirely unsurprised that Al Jazeera was airing a bunch of revelatory cables puked up by an incontinent SSA.

A quick diversion: I must confess that Ronnie Kasrils remains my favourite ex-communist. That’s mostly because he lives like communists would live if there were still such things as communists. He inhabits a modest flat in Killarney, eats glow-in-the-dark meat product, and never shall his motor vehicle feature on an episode of Pimp My Ride.

He also happens to be my favourite ex-spy. I’m almost sure that Kasrils, while serving as Minister for Intelligence Services between 2004 and 2008, never dissolved his enemies in vats of acid, or flung children into the Atlantic from low-flying SAAF Puma 330s. That said, you never know—or rather, you only know when a disenchanted spy goes all Chelsea Manning and starts wielding a memory stick like a Walter PPK.

Which, of course, is exactly what has just happened.

On Monday, Al Jazeera and The Guardian revealed that they were in possession of a cache of confidential and top secret documents, many of which are communiqués between the SSA, Israel’s Mossad, Russia’s FSB (a rare score), the UK’s MI6, and dozens of other agencies in the Middle East and beyond. The documents span the period that Jacob Zuma came to inhabit the master bedroom of the South African psyche, which is to say 2006 until the end of 2014. Kasrils was only Minister for two of those eight years, but they were two very interesting years indeed.

“That would be Polokwane, wouldn’t it?” Kasrils mused, referring to the ANC’s 52nd National Conference, the one in which Jacob Zuma famously ousted Thabo Mbeki using all means of skullduggery, while countering similar treatment from the opposing camp.

Yessir. That would be Polokwane.

Kasrils is still dealing with the fall-out from Zuma’s ascension, recently having sued Deputy Defence Minister Kebby Maphatsoe after the latter accused him of “hand-picking” the woman who accused the soon-to-be-president of rape. Would this sort of thing be spat up by the SSA cache now in the hands of Al Jazeera, I wondered?

“It will be interesting to see what they have,” chuckled Kasrils.

“I have a clear conscience about everything I did, quite frankly, but who knows what people said about me or claimed about me? I’ll watch it carefully.”

“I’ve been through these things so bloody often,” laughed Kasrils. “It’s the magic of life after all, isn’t it?”

And to that, I genuinely had no answer.

The Eldorado of Espionage

It’s impossible to gauge the importance of a data dump the night of its release. But the documents, generously meted out by Al Jazeera and the Guardian at around 18h00 on Monday night, have already smashed what remains of Benjamin Netanyahu’s international reputation. In 2012, the Israeli PM brought an image of a Looney Tunes bomb to the UN, explaining that Iran was about fourteen seconds away from wiping Israel off the map. According to his own security agency (who, let it be said, have lots of skin in the game), Netanyahu was full of shit. Iran, as one cable notes, was “not performing the activity necessary to performing nuclear weapons.” Which meant that Netanyahu was trying to coerce his main ally into nuking Iran because, well…? He likes mushroom clouds?

None of this is particularly new. Netanyahu is widely loathed in diplomatic circles, and no serious analyst I’ve ever met believes a word he says. As the documentary The Gatekeepers made clear, the Israeli intelligence services have similarly loathed Israeli politicians for as long as there’s been Israeli politicians.

That said, it does seem interesting that these cables have been leaked to the Guardian and Al Jazeera—hardly Israel fanzines—a couple of weeks before Israelis go to the polls on March 17. What’s more, the cables land only a week before Netanyahu is scheduled to speak before the Republican majority in the United States Congress. The speech flouts almost every element of diplomatic protocol (both President Barack Obama and the Israeli National Security Advisor were kept in the dark), and is an act of petulance so vile that Netanyahu has opened himself up to all manner of Schadenfreude should these cables check out.

Timing, as they say in politics, is a bitch. As an ex-Goldman Sachs hack, Netanyahu will no doubt appreciate that he has been properly screwed by those who had it out for him.

But again, why? Who leaked these documents? And could the timing have anything to do with Kasril’s longstanding and forthright opposition to the, um, Zionist Entity?

“I dunno,” said Kasrils. “I was constantly criticising them, and as a minister I never wanted anything to do with them.”

A second diversion: every time I pen a mild encomium to Kasrils, I get kicked in the balls by my co-religionists, who remind me of his 2001 “Declaration of Conscience by South Africans of Jewish Descent“, which was not what I’d describe as an endorsement of Israeli policy. I’m reminded by those same e-mail campaigners that Oom Ronnie has always hated on the “homeland”, and that in doing so immeasurably damaged Israel’s standing within the ANC. All true. But I don’t think the ANC needed much help in this regard, considering how cozy the old Kibbutzniks were with the Apartheid regime—too say nothing of the very real solidarity that many in the ANC feel for the Palestinian struggle against the Occupation.

It gets worse. Turns out, Mossad was in possession of illegally acquired blueprints for South African anti-tank missile technology, blueprints that were returned to the government following a cover-up that protected the Israeli citizen that got hold of them in the first place. And South Africa has been under all sorts of pressure to monitor Iranian activities in the country, in an effort to end the subverting of sanctions that are designed to cripple the Islamic Republic’s resolve with regard to its nuclear programme (the same one that isn’t nearly as advanced as we’re led to believe).

What’s the take home at this very early stage of the spy cable leaks? Well, according to what one spook said to the Guardian, “South Africa is the Eldorado of Espionage.” Which I don’t think that was meant as a compliment. When I rang up the SSA and asked spokesperson Brian Dube whether we should be worried about the efficacy of our spy agency, he was non-committal.

“We do not comment on operational matters,” he told me, “except to indicate our legal and operational framework remains in place.”

No doubt. But who leaked these documents, and why?

“It is difficult for us to indicate in detail, from what source, what was the motive, et cetera. It’s really too early for us to comment.”

Are South Africans safe, I wanted to know? If the security cluster was jamming cellular phone signals in Parliament and leaking top secret missives to British broadsheets, how long was the country for the world?

There was, Dube assured me, nothing to worry about. “There are records, as things stand, for any person who might be concerned about the security services. Of course, people must be vigilant, but for those who are concerned, recourse is there for them.”

[T]here is another government concealed behind the one that is visible at either end of Pennsylvania Avenue, a hybrid entity of public and private institutions ruling the country according to consistent patterns in season and out, connected to, but only intermittently controlled by, the visible state whose leaders we choose.

That sums up South Africa as precisely as it lays bare America. When all of the work is done, and we see what we’re dealing with, democracy circa late-stage capitalism is going to earn another black eye.

“I’m damn sure,” said Kasrils, our old spook-in-chief, “that it’s going to be very revealing.” DM

Why are we being kept in the dark on dealing with load shedding and where is the urgency, Mr President?

Reflecting on Heritage Month and diversity

Our South African heritage: From a diverse past to a united future