Op-Ed: What comes after SAPA’s demise – a private company or government-controlled news wires? 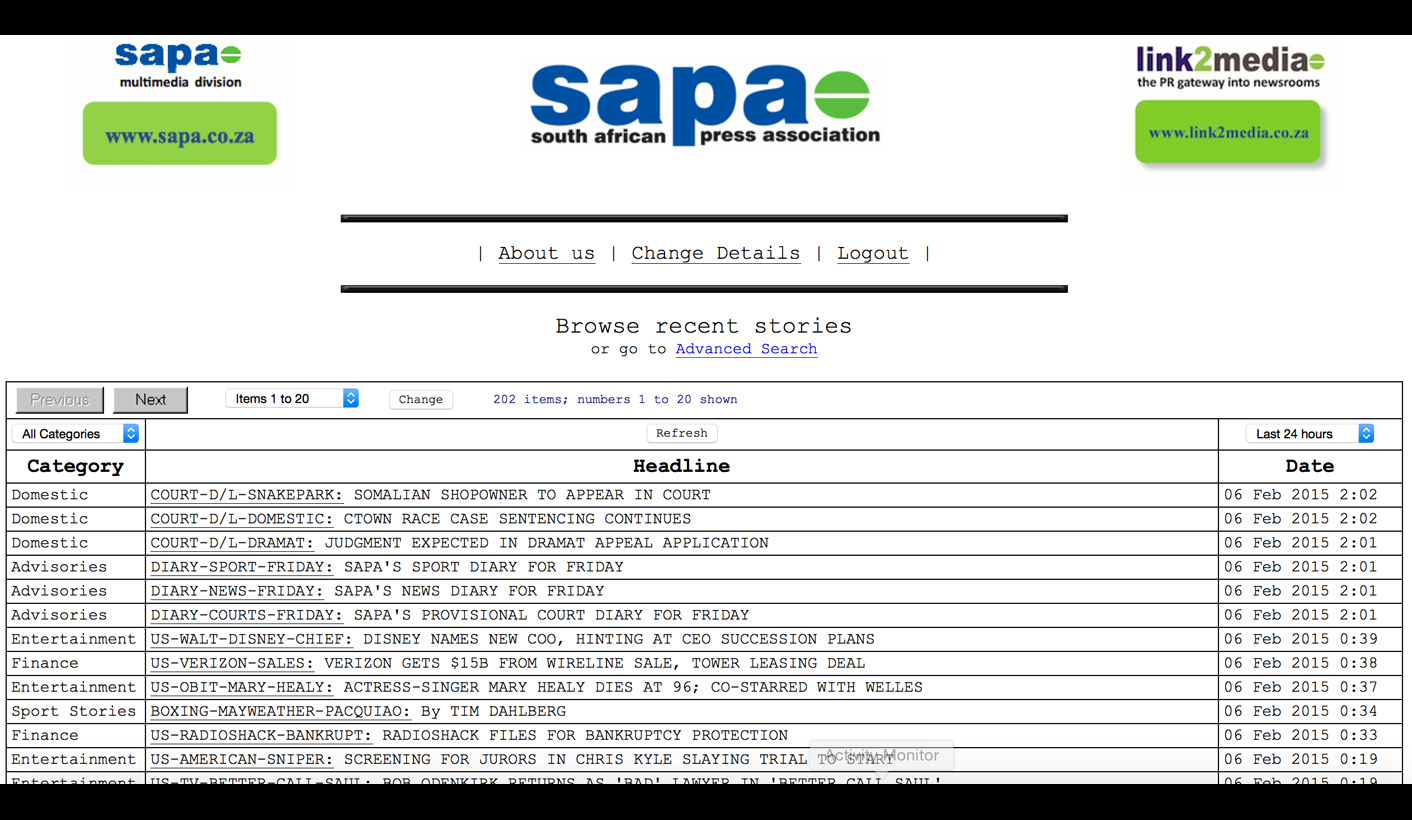 The closure of Sapa means we are faced with a range of worrisome implications, not least of which may be the end of independent news dissemination. The question is whether the resources are available to news media to prevent this. By RAYMOND LOUW.

The announcement that South Africa’s national news agency, Sapa (the South African Press Association), which has served the country’s media with a news service for 76 years, is to close on March 31, has been rightly described as a blow to press freedom by the Cape Town Press Club.

But the big question that looms is: what will take its place? Is there any other independent organisation or company which will be able to carry on the work of this remarkable news agency, or will the government try to get involved so that it can control the media?

Sapa started as a non-profit co-operative enterprise on July 1, 1938. Then the big newspaper publishers – most of whose papers were in English – bought out the Reuters South African News Agency that had started operations during the Anglo-Boer War of 1899-1902.

Today, in addition to serving the vast range of print media as well as TV and radio and online news platforms nationally and internationally, Sapa also supplies many non-media subscribers. These include government departments, diplomatic missions, NGOs (non-governmental organisations), political parties, press release agencies and businesses. It is also a prime distributor of press statements by government departments, businesses, institutions and NGOs.

But in 2013 its ownership structure began to fracture. The four major companies supporting it as shareholder members then were the Times Media Group (owners of Business Day, The Sunday Times and several other publications)‚ Caxton Publishing (owners of The Citizen and a string of suburban and regional newspapers), Naspers-owned Media 24 (with Die Burger, Beeld, Rapport, City Press, Daily Sun and other city and suburban papers in its stable) and Independent News & Media SA (with the country’s largest number of mainstream papers, among them The Star, Cape Times, Weekend Argus and Daily News).

All these companies have been hit by the internet and social media-induced downturn in circulations and advertising and were having difficulty continuing their role as the main funders of Sapa. The first crack appeared in June, 2013, when Times Media withdrew as a member and ended subscriptions for its print titles but paid full subscriptions for its online platforms which had previously had free access to the service. This caused a significant drop in Sapa earnings.

In June, last year, Caxton Publishing’s The Citizen withdrew its membership when its term as a shareholder ended. (It resumed membership in September.) Independent News and Media also tendered its resignation but a few hours before it was to take effect at the end of November, it withdrew it, only to lodge another six months’ notice of resignation at the end of April 2015. Against this swirling resignation picture was the firm support of Media 24 which, according to a source close to Sapa management, continues to fund Sapa because it requires the news service and feels that the media industry and the country as a whole should not lose an independent national news agency.

Indeed, as chairwoman Minette Ferreira pointed out, the resignations of these major groups resulted in Sapa’s annual revenue being cut from R27m to R11m. This meant Sapa would not be able to cover running costs including the salaries of the 48 staffers, among them 35 editorial employees, in April. She added that the company needed a massive new investment in its IT infrastructure, “a financial burden the current structure just cannot carry.”

Ferreira, who is a board representative of Media 24 where she is employed as head of its magazine division, announced that Sapa was open to bids for its assets. As Sapa is a special category non-profit company it cannot be sold but after its assets have been disposed of, the company will be liquidated.

Nkonki Incorporated, an independent firm of auditors and financial advisers, has been appointed to sell the assets and close down the operation.

Nkonki is evaluating the bids it has received from three companies which say they want to establish a commercially driven business on similar lines to Sapa. They are Gallo Images, 50% owned by Media 24 but with a strong affiliation to the international picture agency, Getty Images; KMM Review Publishing Company, a black-owned independent book publisher and producer of niche media products including successful TV shows; and Sekunjalo Investment Holdings, which recently bought Independent News and Media.

She said subscribers would be briefed on plans for the establishment of a new operation and they would be “approached directly by the operators of the new syndicate business.” The future structure would be determined by the party that ultimately took over the assets. This would not be determined by the Sapa board, she said.

Shortly after the Sapa bombshell, Independent News and Media’s online channel announced the formation of a news syndication service to operate in 15 African countries under the title African News Agency (ANA). The new service is being backed by Dr Iqbal Survé, executive chairman of Sekunjalo Investment Holdings, who claims he will inject US $20-m (about R234-m) into ANA and incorporate Sapa, though there is some doubt about what will be left of Sapa by then, given the current erosion of staff.

Survé’s statement raises the thorny ethical question whether it is appropriate for Sapa’s successor to be a newspaper publisher already in competition with other newspapers and electronic media in the country. Pointed reference to such an arrangement being highly undesirable was made by the co-chairmen of the Cape Town Press Club, Donwald Pressly and Brent Meersman, at the function lamenting the closure of Sapa.

They said: “We lament the closure of a credible source that acted not only independent of government, but also free from the biases of any single, powerful media owner.”

There can be no question that the actual or perceived conflict of interest between the service and the scoop-hungry operations of the company’s papers would not only be undesirable but are likely to undermine the reputation and status of the service. Readers of publications using the service would be suspicious that it was riddled with the biases Pressly and Meersman refer to and would question the content. There are also grave doubts whether the owners of other newspapers would subscribe to a competitor’s news wires. Without those subscribers it would be extremely difficult if not impossible for a commercial enterprise to make headway.

Of the other two contenders Gallo Images with extensive professional picture agency experience would be a prime candidate. But would local publishers, journalists and the public be suspicious of the potential for influence from its internationally prominent affiliate, Getty Images? South Africans have always demanded news and information about what’s happening in the country from fellow South Africans, rather than foreigners.

The final candidate, KMM Review Publishing Company, may discover that its lack of news production and syndication experience would be a serious handicap, though it could buy expertise by taking over what’s left of Sapa’s staff. But it is the weakest of the three candidates and if the three major publishing companies found the costs of running Sapa too heavy, how would this smaller company cope with the financial burden?

So, the outlook is not promising. Certainly, the hope that there will be a seamless transfer to another 24-hour independent daily news service appears unlikely. Does that mean a scrappy service, or even a black hole with no national news agency? The latter could lead to an ominous situation that all the players in this drama are aware of but don’t talk about – and that is the government viewing a huge hole in the media environment as unacceptable and filling it with a state news agency. It already has a skimpy “news agency’’, SA News, run by the Government Communications and Information Service, now under the Department of Information, which could be enlarged.

The opportunity would delight the government with its strong control streak. It is criticised for imposing its will on the SABC and warmed to the ANC’s Media Appeals Tribunal plan, now fortunately in abeyance, but which would have enabled it to end press self-regulation and so gain substantial control over the press.

Journalists mutter about this possibility, fully aware that a state news agency will end independent dissemination of credible news and opinion in the country, tempting officials to replace it with propaganda. Do the major print companies care? DM