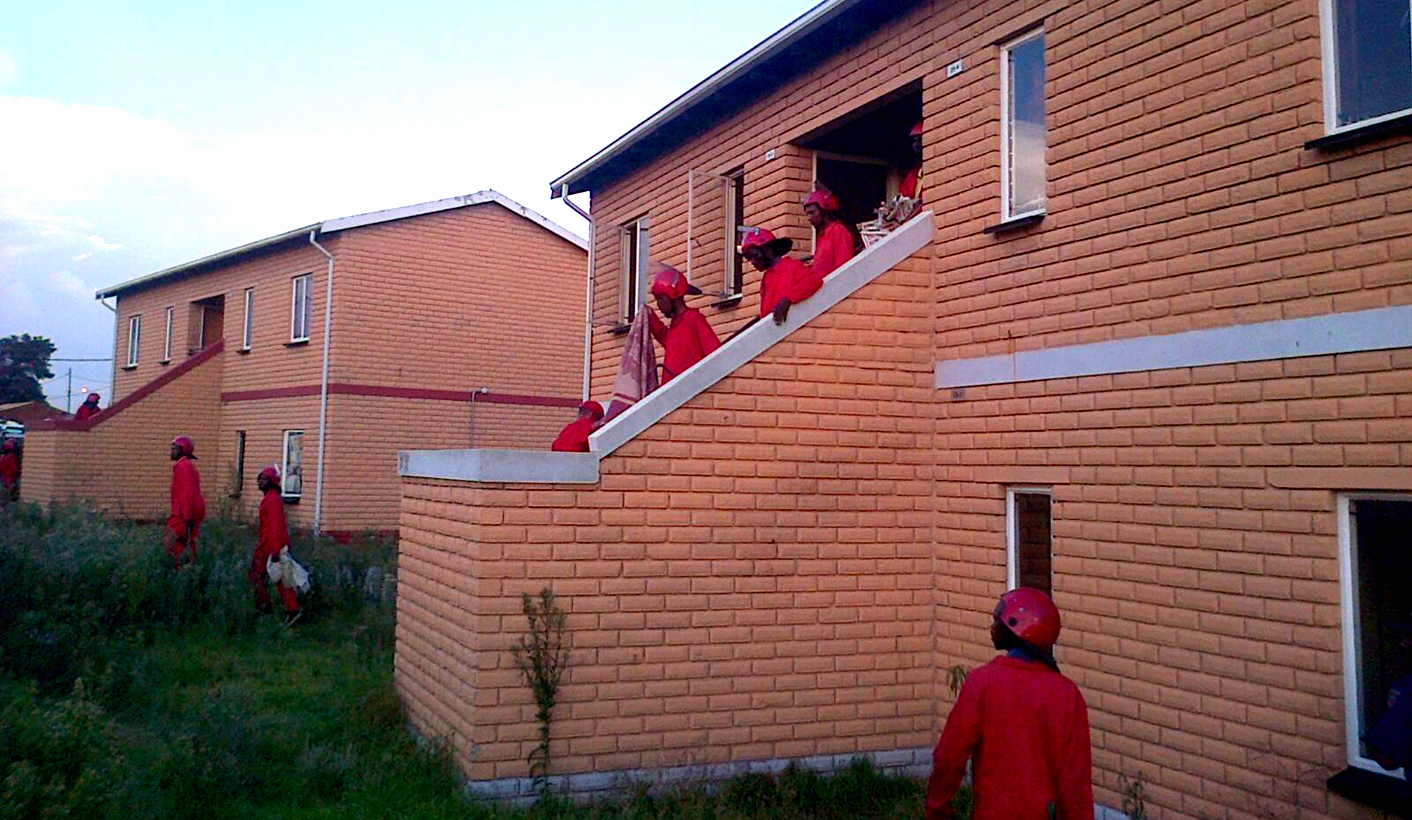 Last week, residents of Soweto’s Mzimhlophe Women’s Hostel were at the forefront of a crowd that occupied 66 new homes at the hostel site - homes which have stood empty for over seven years. By MOSA DAMANE for GROUNDUP.

Those who managed to occupy houses and found there was electricity connected, celebrated with loud music late into Sunday night, 8 February.

The next morning saw them hard at work, trimming the grass in front of the doorsteps. But not for long. By afternoon, over 70 Red Ants and Metro police had dislodged the occupiers, leaving them to trudge with their belongings the few metres back to their former, much humbler two-roomed homes.

The hostel residents remain defiant. Why, they demand to know, have these new properties, which local government promised would relieve them from their present cramped accommodations, been allowed to stand empty since they were completed more than seven years ago?

Mzimhlophe Women’s hostel was built in 1970 for women who came to Johannesburg from the former homelands to work and didn’t qualify for a government four-roomed Soweto house.

A new project on the hostel site was started in 2004, an initiative of Joshco (the Johannesburg Social Housing Company), the City of Johannesburg-owned company mandated to provide and manage houses for the poor at affordable rents.

A 45-year-old hostel resident, who feared to give her name, said, “We were given first preference for allocation. Now we are expected to pay R750 per month to rent the houses. They didn’t talk about rent when they presented a mouth-watering deal to the dwellers of the hostel. Now the system they want to use favours people with fat cheques. It’s a disadvantage for unemployed hostel dwellers.”

The Women’s Hostel is a famous Soweto landmark. It started as a cluster of red brick houses, arranged in neat rows. Each house was shared by six women.

In 2002, as demand for accommodation shifted from elderly single females to all ages and families, the houses were converted to hold two families apiece, each unit having two rooms and a small toilet. Water came from an outside tap. More rows of green and pink houses were added later.

Not all residents of the hostel want to move into the new properties. Pauline Mmusi, aged 77, was born in Mafikeng (now Mahikeng), and was among the first to arrive at the Women’s Hostel in 1971. Today, she lives alone in one of the two-roomed red brick units.

“I have no plans to move to the new houses, I like my old house as it is,” she says. “The hostel is my home.”

Gogo Mmusi is disappointed with the development. “They promised to build a clinic and shops for older people like me, so I wouldn’t have to walk a distance for my medication and food,” she says. “But now we are not even considered.”

She recalls the old days: “We paid R6 every month for rental and the hostel was neat and tidy under the leadership of Matron. There was a fence and two gates with security guards, and intruders were a rare thing.

“Tsotsis would sometimes trespass at night in search of ladies. We’d blow our whistles, and within a blink of an eye, the whole place would be safe and secured. The Apartheid era was better, because there was order and dignity in the hostel. Now you kiss each other in front of elders and do as you please with your lives! I don’t feel safe anymore.”

Motsamai Motlhaolwa, spokesperson for Gauteng Department of Human Settlements, said, “The invasion was illegal and driven by political issues rather than a genuine need for people to be given homes. We have successfully and peacefully evicted those invaders and this will give us a chance, together with Joshco, to continue with the allocation process that has already started. The baseline for rental is R750 and upwards.”

He said this was also why it was taking so long to allocate the houses.

“Rights come with responsibility,” said Motlhaolwa. “These units will be allocated to rightful and deserving beneficiaries. That process is under way. Our plan moving forward is to allocate all completed hostels in Soweto before the end of the second quarter of this year.”

One of the occupiers said, “On Sunday, I thought I had finally found a house for my mother. She registered in 1996 for an RDP house. Representatives from the housing department take so long to give us feedback … that is why we decided to help ourselves.”

Not all the occupiers however were hostel residents. Noah Matlala, 40, lives in Mokhele Street close by. “I registered for a RDP house in 1997 and I was very happy when the Department of Housing handed me my C Form,” he says. (C Forms are a document issued as proof that the holder is eligible for a free RDP house).

“Two years ago I went to the Department of Housing to check if my name was still on the database. I was told that they are busy with the 1996 list. After 18 years of waiting and attending endless meetings with housing, I also decided to grab a flat for myself.” DM