From Invincible Man to ‘Broken Man’: Zuma under pressure 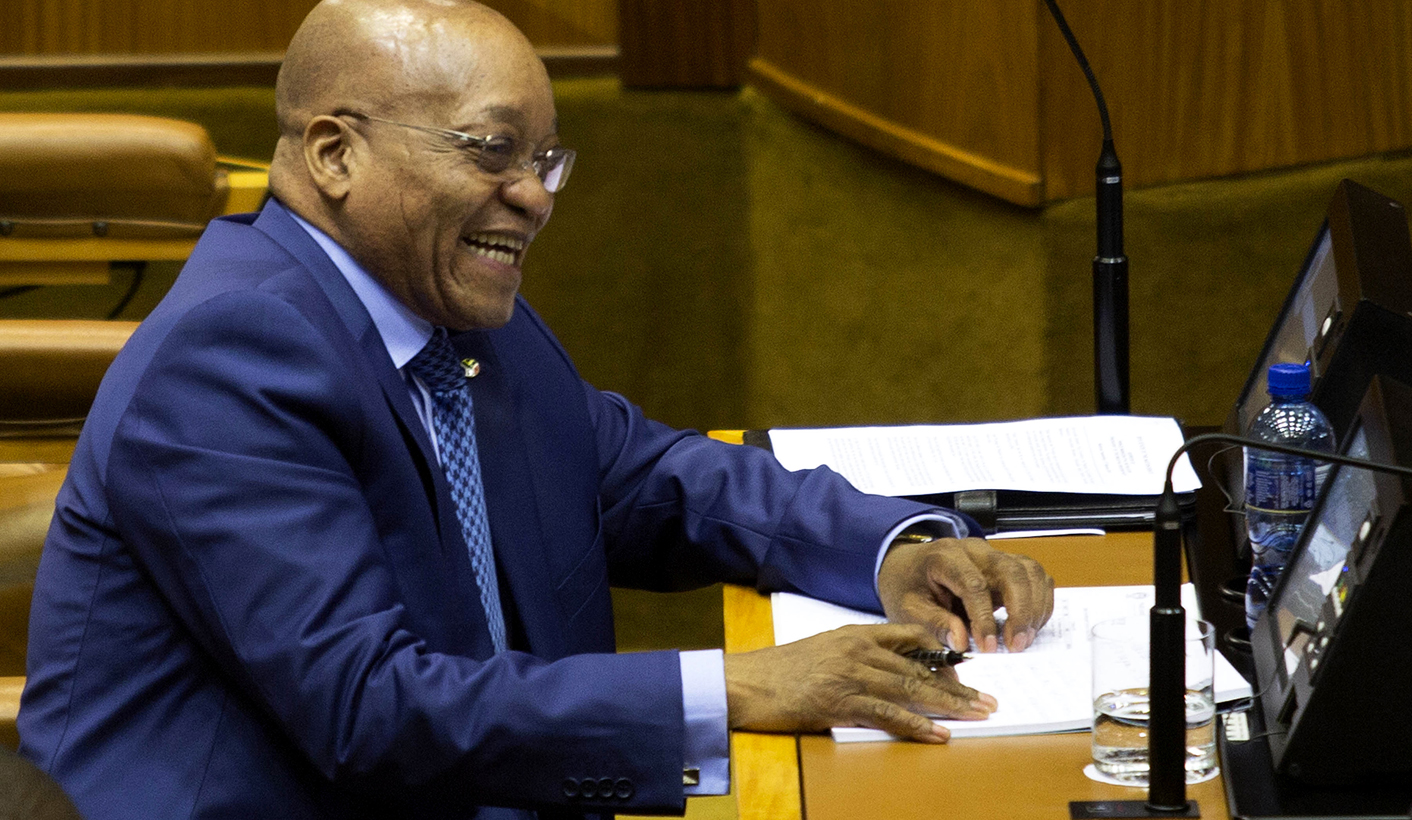 Was President Jacob Zuma stung by the roasting he got from Democratic Alliance parliamentary leader Mmusi Maimane during the State of the Nation Address (SONA) debate on Tuesday? If you ask him, he would probably chuckle and say it did not bother him in the least. But somewhere deep down, Zuma will remember riding the crest of popularity and the public adulation he once enjoyed. He will never admit it, but the words “You are a broken man, presiding over a broken society” will burn. It might also worry him that none of the ANC speakers in the debate were able to argue against Maimane’s “broken man” onslaught. Try as they might, it is extremely difficult to defend Zuma right now. By RANJENI MUNUSAMY.

On Tuesday afternoon, just after the SONA debate began in Parliament, ANC secretary general Gwede Mantashe issued a media statement. He has been trying to stay out of the controversies after last Thursday night’s dramatic events in the House. He even told a radio journalist “I am not Baleka Mbete!” when asked to respond to the Speaker’s comments at an ANC event over the weekend when she called Economic Freedom Fighters leader Julius Malema a cockroach.

ANC media statements are usually issued by the party spokesman Zizi Kodwa. In special circumstances, they are issued in Mantashe’s name. In Tuesday’s statement, he said he was making a “special plea to all Members of Parliament across political divide, to focus on the real issues raised in the State of the Nation Address”.

“The events that took place during the State of Nation Address last week call on all of us to step back and reflect, and ask a question, what needs to be done? We witnessed our people’s Parliament once again, degenerating into chaos,” said Mantashe, who had a bird’s eye view of the proceedings from the public gallery.

He also condemned the scrambling of the cellular network and the interruption of President Jacob Zuma’s speech. “ANC once again condemns the jamming of signal during SONA as this violated the Constitution, equally, we condemn deliberate effort to disrupt the State of the Nation Address by some members of Parliament, as this was meant to deny our people of their right to receive full account of government plans and commitments as presented by the president,” Mantashe said.

He ended the statement saying: “Whatever our differences are, we must keep the interest of our country above everything we do.”

In the past, unruliness by the EFF and attacks on the president prompted Mantashe to call them “rebels” and “Nazis”, and launch a rigorous defence of Zuma. This time, despite the fact that the commotion happened at the biggest state event of the year, Mantashe was somewhat toned down and instead asked for “real issues” to be focused on and members to act in the interest of the country.

This very approach was evident in how ANC MPs participated in the SONA debate. It could be that there is a concerted effort to deflect from the Nkandla controversy, because there is no way of winning it, or because the ANC is on the back foot. The network jamming and discovery that the “security officials” who ejected the EFF from Parliament were policeman, as well as the widespread condemnation of Mbete’s cockroach comment, would have piled more pressure of the ANC.

The choice of ANC speakers in the debate were also not people who would go toe-to-toe with opposition leaders – Nathi Mthethwa, Pravin Gordhan and Ebrahim Patel, for example, were pretty much focused on their portfolios rather than butting heads with those on the other side of the House.

So Maimane’s lethal and unforgiving take-down of the president now stands uncontested.

In arguably the most poignant speech delivered in the House so far in this term, Maimane said: “We have allowed one powerful man to get away with too much for too long. This man is here in our presence today.

“And what did you do? You laughed. You laughed while the people of South Africa cried for their beloved country. You laughed while trampling Madiba’s legacy – in the very week that we celebrated 25 years since his release. Honourable President, we will never forgive you for what you have done.”

Malema was surprisingly less aggressive and even let up on nagging Zuma about when he would pay back the money. He said they would wait for Zuma’s question session on 11 March. In a speech focusing on issues of economic freedom and areas of failure of government, Malema did however promise to remove Zuma from political office.

“We want to promise you that your attitude will never take this country forward, and if you continue doing what you are doing, such will lead to political and social instability,” Malema said.

Surprisingly, the ANC speakers did not hit back at these devastating comments as you would expect them to.

ANC MP Thandi Mahambehlala said Malema had made anarchy and hatred of Zuma his ideology, and accused Maimane of protecting “white privilege”. Gordhan jibed at Maimane, saying he should join the ANC if he wanted to be in government and also needled him about who was really calling the shots in Parliament, him or DA party leader Helen Zille. In response to Maimane’s attack on Zuma, Gordhan countered merely by saying neither the ANC nor the country were broken organisation.

A gush of praise for Zuma came from Free State premier Ace Magashule, who told the president: “The people of the country have full confidence in you… Just stay focused.”

It is a quiet departure from when ANC MPs in the ad hoc committee on Nkandla were falling over themselves to defend Zuma and paint him as a victim. It is quite a difficult line to carry when the tide has turned so severely against the president and when his leadership is so clearly wanting.

There was a time when Zuma’s charisma and personable qualities endeared him to people, and when he was able to connect with and relate to ordinary people. He was able to convince people that he genuinely cared about them and that he was the leader who would champion their battles when he took power. These qualities and popularity helped him fight his legal battles and ride the crest of a wave to the presidency.

But now Zuma is not as invincible as he used to be, and where there used to be widespread adulation, he now constantly encounters derision. While the events at last week’s SONA further exposed how burdensome he is to the ANC, let’s not forget that there was an incident of far greater humiliation. Who could forget Zuma’s face on the big screens at Nelson Mandela’s memorial service at FNB Stadium, when sections of the crowd started booing him in front of the world’s leaders?

Although the ANC will never concede it, it is becoming more apparent that Maimane is right: Zuma is a broken man. And society is breaking because of his weak leadership.

The ANC is stuck with him, and has to find ways to keep afloat in a torrent of controversies. It must be obvious to them by now that no single leader of the ANC has brought more damage to the organisation than the man who now leads it.

It appears it is just him who cannot see it. That he can still laugh in the midst of chaos and even when he is under attack is a whole other mindspace we will perhaps never understand. DM