Cricket World Cup: Of the tech tack and the umpire empire 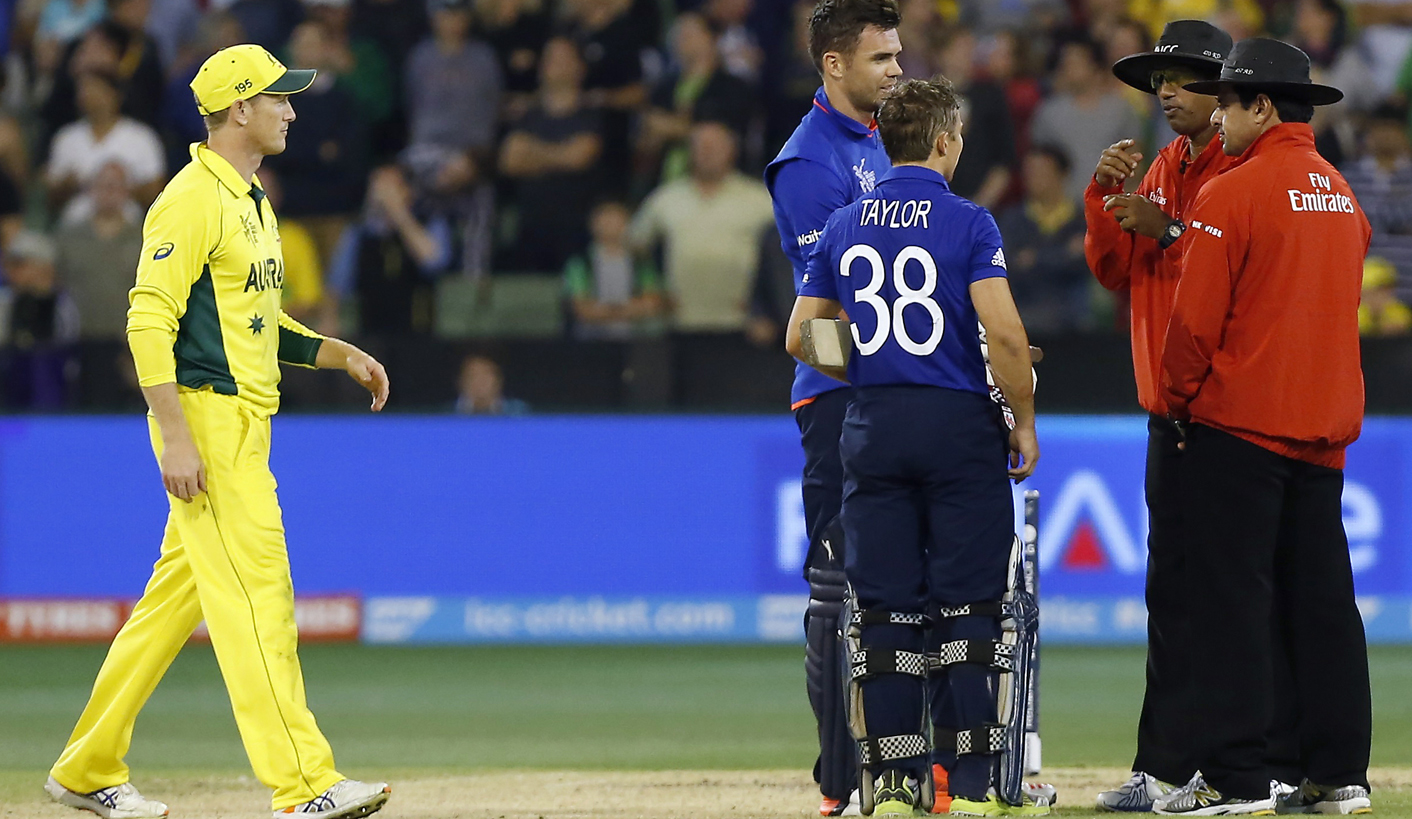 It’s not even two days into the Cricket World Cup, and already there were two dodgy choices involving the Decision Review System. Both were down to human error and not the tech, though, and it is imperative that the ICC get real about how they share information about their system. By ANTOINETTE MULLER.

Within the first two days of the 2015 Cricket World Cup, the DRS system has already come under the scanner. The first incident occurred when England played Australia. England were already well on their way to yet another defeat, but James Taylor was soldering on and was on the verge of a ton.

Taylor was then given a LBW, but it was reviewed immediately. The decision was overturned, but James Anderson was found to be run out after the two had snuck a leg bye. It should not have happened as the ball should have been dead once the decision of “out” was made on the field. Taylor protested, trying to tell the umpires the rules, but there was no listening and the match was done, leaving Taylor two runs short of his maiden century. The ICC admitted the error in a press release afterwards, but that doesn’t change the error that happened.

The second incident came when Pakistan and India locked horns the very next day. India reviewed a caught behind decision after Umar Akmal looked to have feathered the ball through to the keeper. Hot Spot is not being used and there was no evidence on Snicko of a genuine spike, yet the decision was overturned by a third umpire, Steve Davis, and Akmal was sent on his way. On that incident, there was no comment from anyone.

Everybody makes mistakes. In most cases and especially in sport, those who err are given the opportunity to explain those mistakes. If a batsman plays a daft shot or a bowling attack persists with a plan without it working, they can be quizzed on their tactics afterwards. Their reasoning might not always be accepted or make sense, but at least it offers some sort of insight.

The ICC does not allow such luxuries when it comes to their umpires. They are not allowed to speak to the press after a match, even via a representative. They don’t even communicate directly when there has been a mistake (like when Taylor was robbed of a century). Instead, their actions are explained through press releases. This is no good. All it does is breed animosity and dehumanise the umpires. It’s dangerous, because fans often forget that human error is part and parcel of umpiring, just like human error is part and parcel of winning and losing.

The thing that is so staggering is that the solution to quite simple. Why not just allow an umpire to have a brief press conference post-match if anything controversial happened? Or, if that’s deemed too risky for the press pack baying for blood, allow these umpires to make a statement explaining why they did what they did.

Another and perhaps more practical solution is to broadcast the communication between the on-field and the third umpire. A trial of this took place during England’s domestic season last year and it was superb. It offers the viewer an insight and understanding into how and why things happen. Those in the stadium, of course, won’t have access to this information immediately, but they can go and read up (or listen up) on it post-match.

What does the ICC gain from not broadcasting these conversations? Do they think that the umpires discuss mathematical codes that might unlock all the secrets to the universe when they chat about whether or not a player is out? It unnecessary, foolish and insulting to withhold such important information from viewers.

This World Cup is the ideal platform to prove the value of the Decision Review system. For the most part, the system is effective. Eliminating poor decisions is an important part of bettering the game. DRS becomes ineffective where those who are tasked with using it don’t know exactly how it works. That there is still uncertainty from umpires about what exactly the rules are when it comes to certain elements of DRS is quite clear. For that, the ICC should take a large part of the blame. That their officials are not versed in the rules of the system during a tournament on such a grand scale as the World Cup is concerning.

The important thing now is to make sure that these kinds of blatant errors do not occur again. And that in future, the decisions are explained more clearly. DM