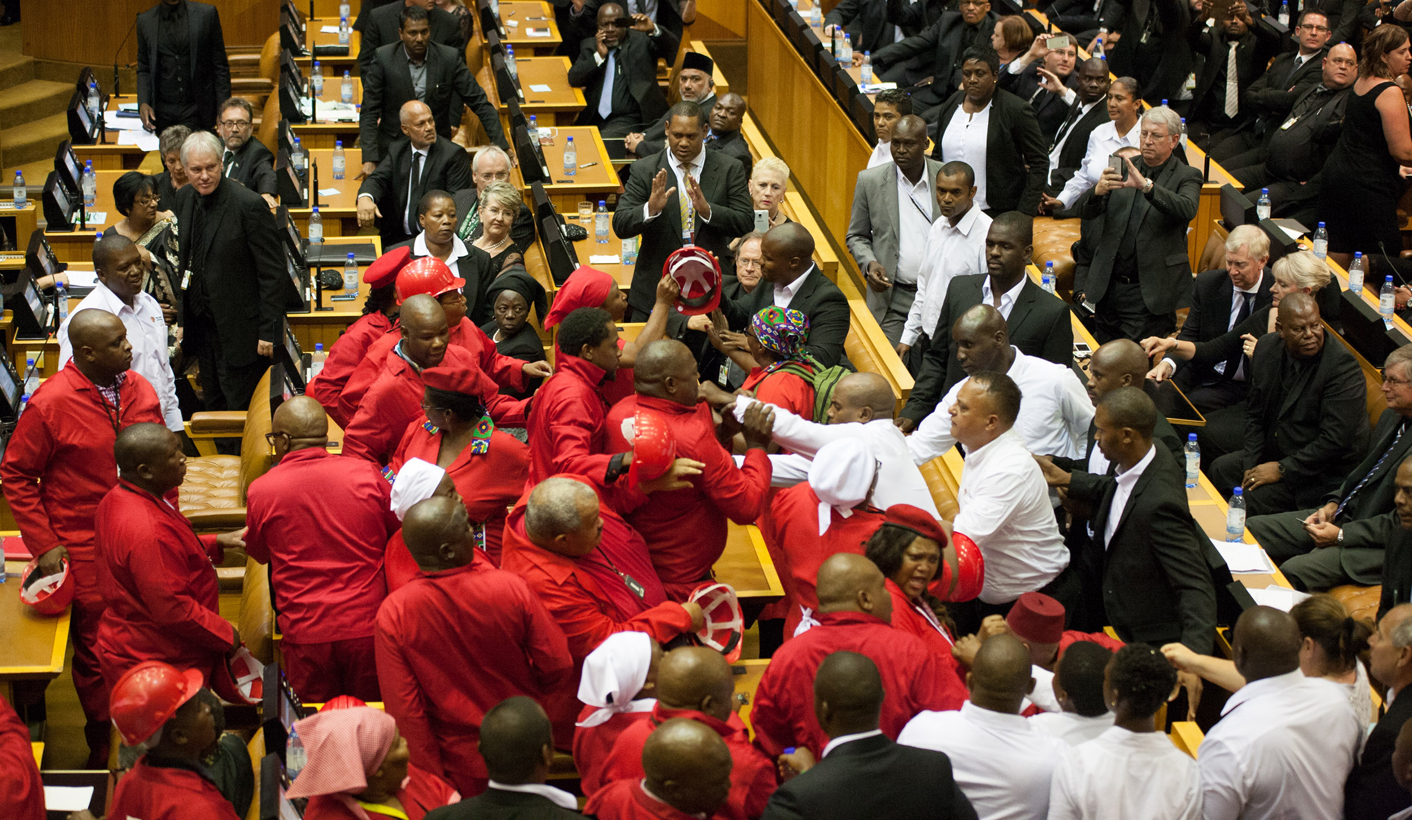 The eviction of Economic Freedom Fighter (EFF) MPs from this week’s State of the Nation Address raised a number of questions surrounding the use of security forces within the South African National Assembly and parliament, and under which conditions such force is warranted. By Nechama Brodie for AFRICA CHECK.

The same Act states that members of these “security services” may enter the parliamentary precincts and perform “any policing function in the precincts” in two circumstances. The first is with the permission – and under the authority – of the Speaker or Chairperson. The second is when there is immediate danger to life or safety, or a threat of damage to property. In the latter case, security forces can enter parliament without permission, although they have to report to the Speaker and the Chairperson “as soon as possible”.

The Speaker and the Chair of the National Council of Provinces, in this instance Baleka Mbete and Thandi Modise, “exercise joint control and authority over the precincts on behalf of parliament.”

Was the Speaker within her rights to remove opposition MPs?

This is where there are some grey areas, and it appears as if the open-ended nature of some of the Acts and Rules of Parliament have been pushed to their limits.

“The only other incident of violence I can recall was when [ANC MP] Johnny de Lange and Manie Schoeman [then a member of the National Party] got into a fistfight in 1998, which degenerated into a brawl involving a number of MPs.”

Van der Westhuizen said that, “even though actual violence happened on the floor, in front of the Speaker’s podium, I don’t recall the police being called in”.

In the past six months, however, members of the South African Police Service have been deployed in parliament on no less than three occasions, including this week’s State of the Nation Address.

In August 2014 riot police were summoned into the National Assembly, but were later withdrawn. And, in November 2014, police actually entered the National Assembly at the specific request of the Serjeant-At-Arms, following the refusal of EFF Member Reneilwe Mashabela to obey the presiding officer’s instructions to leave the chamber. In this instance several MPs and two police officers were reportedly injured.

Van der Westhuizen added that, in terms of the EFF MPs’ behaviour at SONA, they did “not adopt a violent approach at all”.

“They used political speech to make their point. And they were doing it within parliamentary rules. They didn’t threaten, or break anything or assault anyone. There was no violence from the [EFF MPs] themselves – up until point when they were forcibly dragged out, and then some resisted…” she said.

It has been argued that the Speaker instructed security services to remove the EFF MPs under another provision of the Powers, Privileges and Immunities Act.

Section 11 states that “[a] person who creates or takes part in any disturbance in the precincts while parliament or a House or committee is meeting, may be arrested and removed from the precincts, on the order of the Speaker or the Chairperson or a person designated by the Speaker or Chairperson, by a staff member or a member of the security services”.

The rules are vague

Van der Westhuizen said the rules may be too vague. “If I walk into the chamber and start calling ‘Pay Back the Money’, they have full right to remove me. But there is a difference…between a random somebody disrupting parliamentary proceedings, and an elected representative asking hard questions.

“Malema and the [EFF MPs] were basically doing their jobs as Members of Parliament, and you can’t say that’s disruptive to the parliamentary process. Obviously the rule writers didn’t foresee a situation like this, where [security services] were called in to forcibly remove elected representatives because they were using political speech in a way the Speaker doesn’t like. The Speaker cannot arbitrarily ‘not like’ what you are saying.”

“It seems to me,” Van der Westhuizen told Africa Check, “that some South Africans don’t understand that [the EFF MPs] are elected representatives. Some of the responses have said that the [EFF] were causing a nuisance, and surely the Speaker must be able to instil law and order. But ‘elected representative’ is a phrase of importance. These people are placed in parliament by South African voters. They represent hundreds of thousands of voters. Speaker Mbete, who is also ANC chairperson and seems to be acting more on behalf of Luthuli House, does not have the right to remove elected representatives to protect the president against accountability.”

Pierre de Vos, Claude Leon Foundation Chair in Constitutional Governance at the University of Cape Town, said that the Constitution “actually prohibits any MP from being arrested for anything they say in parliament” but adds that “if what you say causes a disturbance and makes it impossible for ordinary business to proceed, then you can be removed”.

According to de Vos: “The Speaker acted too soon, in my opinion. It wasn’t yet a disturbance as defined by the Act. It might have become a disturbance…But the thing had not yet played out to make it absolutely clear it was now a disturbance that would allow Section 11 to kick in.”

He added that the Speaker can also “not act against Members of the Parliament for what other members of their party have been doing”.

“So it could not possibly have been legally acceptable to throw out all EFF MPs if only two or three were involved in what might well have turned into an attempt to [create a disturbance].”

While these irregularities should make it unlikely that any disciplinary charges could successfully be brought or pursued against the EFF members, De Vos indicated that there is little remedy or sanction available to the affected minority party itself. In terms of parliamentary privilege the Speaker is immune from being sued civilly for damages. Only parliament can decide to sanction the Speaker and, given the majority party composition of parliament, this is unlikely to happen.

What could be done, he said, is to “approach a court for a declaratory order to say ‘this is what the rules actually require in each case’, so that in future the Speaker needs to by abide by that process. One can ask for that.”

Who are the ‘White Shirts’?

While Minister in the Presidency Jeff Radebe has confirmed that the non-uniformed “white shirt”, black-trousered security service personnel employed during the SONA eviction of EFF MPs did include police officers, a number of questions remain.

“You can’t have [security] people in unmarked outfits. If you look at repressive regimes, the use of unidentified military and police units, unmarked vehicles, clothing… in my book that is the opposite of democratic transparency. In a democracy built on openness, you need to know exactly which security force member is doing what, and where, when entering parliament.”

Although many of the “white shirts” wore name tags around their necks stating their names, places of work and that they were part of a “high risk” deployment, the chaos in parliament ensured that their identities were obscured.

Pikkie Greeff, National Secretary of the South African National Defence Union (SANDU) added that it is of concern that Thandi Modise, Chair of the NCOP, expressed an inability to determine “who is police and who is not police” following the evictions, and that as the parliamentary authority claimed not to know who the security services were it indicates “either that [they have] no control [over the situation], or that [they are] lying”.

In addition, Greeff said, the Chair used the term “security forces” which is usually used with reference to the defence force and not police.

If this was the case, it would be an entirely different matter. “The president is not allowed to deploy the SANDF in civilian circumstances without a sitting of a committee. If those were soldiers then it was an illegal deployment,” Greeff said.

Africa Check has been able to establish that at least three of the men are members of the Public Order Police unit, commonly known as POPS. DM