SONA2015: The day our country broke 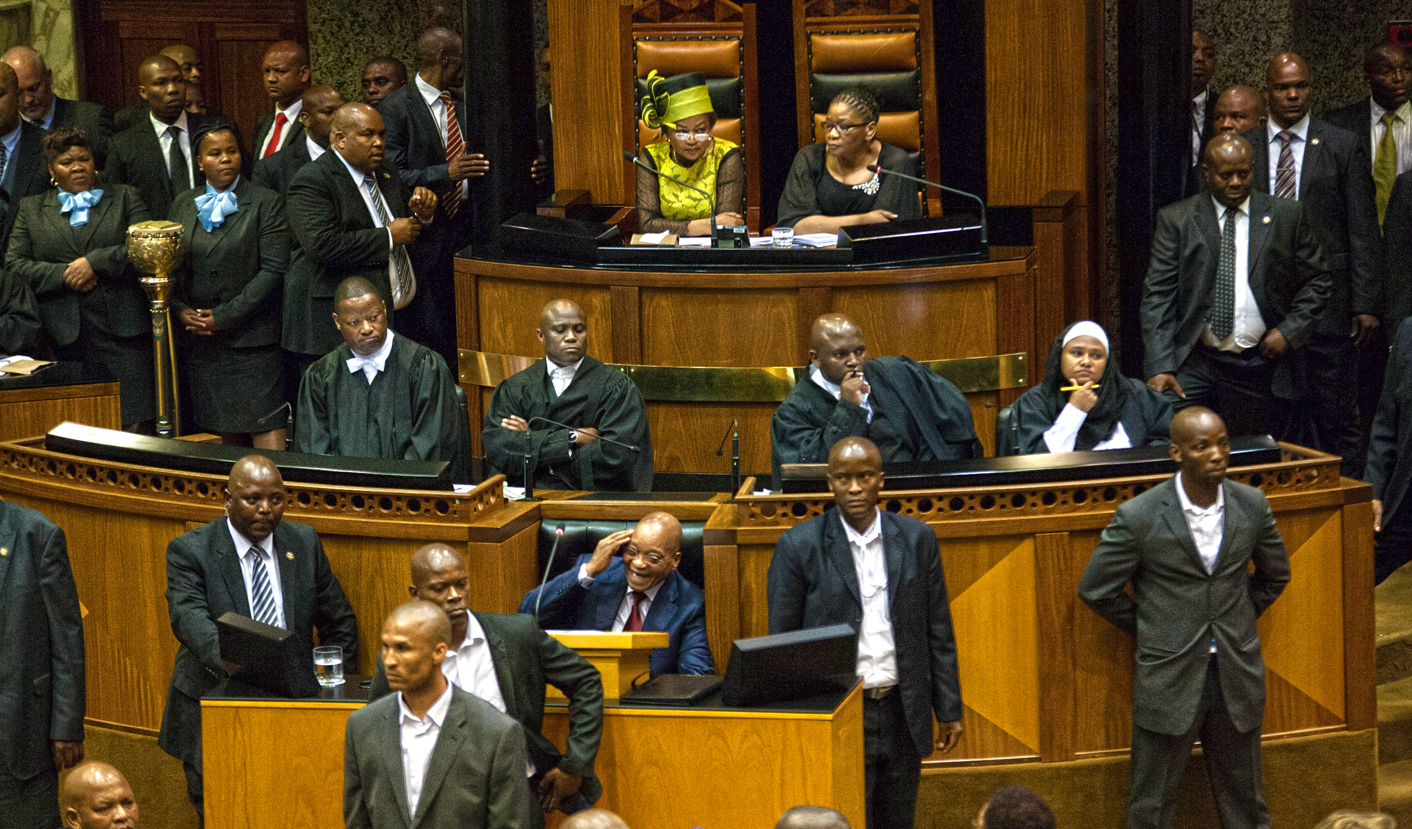 No matter what happens, no matter what those in authority say or do, South Africa will never be the same again. It was meant to be a solemn annual event in the life of our nation: the Opening of our Parliament, the presentation of the State of the Nation Address by our President, the continuation of a journey Nelson Mandela began in 1994. We are now forever damaged by the people we stood in queues to vote to represent us. On Thursday night, it was difficult to see who represented us. Not the people who decided to curtail the right to information, not the people who set out to cause chaos in Parliament, not the MPs who applauded the violent assault and removal of other MPs, not the president, who brought this shame on our country. They all broke us. By RANJENI MUNUSAMY.

There was one perfect moment.

Perhaps it was too perfect.

The national anthem of South Africa, Nkosi Sikelel’ iAfrika echoed in the chamber of the National Assembly. Members of Parliament and guests in the gallery stood at attention, some singing the rousing hymn. On the screens visuals flashed of President Jacob Zuma, Deputy President Cyril Ramaphosa and Speaker of Parliament Baleka Mbete on the steps of Parliament, the presidential guard at attention in front of them and then the canons firing the 21-gun salute.

Among those standing in the gallery, looking over the house, were former presidents FW de Klerk and Thabo Mbeki – Nelson Mandela’s predecessor and successor – two people who understand the great import of the event. They both delivered State of the Nation addresses in that House, they both had to let go of the nation they led.

Sounds the call to come together,
And united we shall stand,
Let us live and strive for freedom,
In South Africa our land.

And for that brief moment, we did stand united, in love and respect for our country. Then, minutes later it came apart.

Yes, the chaos was destined to happen. From the moment the first overpriced brick arrived at Nkandla to begin the “security upgrades” at Zuma’s private residence, the chaos was engraved into our destiny. The media revelations about the exorbitant expenditure on the project, Public Protector Thuli Madonsela’s investigation and report, the various attempts by government to cover it up, the battles in Parliament to sweep the matter under the carpet and the #paybackthemoney commotion in the House last August were all part of the voyage to this ultimate explosion of chaos.

The Economic Freedom Fighters (EFF) announced in advance that they would interrupt the president’s speech, so we should not have been surprised by the scenes of mayhem and violence. But the way the day played out shook the foundations of our democracy.

An implosion in the EFF led to a bizarre sideshow, with members of the party assaulting and chasing one of their own most prominent leaders through a street in Cape Town. As a result, seven members of their 25-strong caucus decided not to turn up for the Opening of Parliament.

In another part of Cape Town, in Wale Street, Democratic Alliance (DA) members were assaulted and arrested by the public order policing unit during a protest.

At Parliament, staff belonging to the National Education, Health and Allied Workers Union (Nehawu) went on strike, refusing to work until their demand for a 13th cheque was agreed to.

Inside Parliament, a jamming device was installed to scramble all cellular networks to block all communications. This meant that journalists were unable to put out information to the world about what was happening in the House, including what Zuma was saying in his speech. In effect, the misguided attempt to protect the president from embarrassment was in fact sabotage of his own speech, as anything he was announcing to the nation could not be transmitted through electronic communications.

It took extraordinary and otherwise undesirable protest action by journalists in the media bay to draw attention to the fact that the right to information was being deliberately impeded. As a result, the DA, EFF and Freedom Front Plus raised points of order as the sitting began to demand that the jamming device be switched off. Mbete claimed not to know what this was about and promised an investigation. But the opposition parties insisted the session could not continue until the networks were unblocked.

Daily Maverick saw an usher carry a note to State Security Minister David Mahlobo, who initially tossed it aside and refused to read it. Eventually he did and left the chamber. It is alleged the note came from deputy President Cyril Ramaphosa. The House bustled for over 10 minutes after the Secretary of Parliament was instructed to see to it that the signal was cleared. When Mahlobo returned to the House, so did the network.

Zuma began his speech, but the House tensed up, bracing for the moment the EFF would interrupt him. It did not happen immediately. Zuma ran through a long list of acknowledgements while the EFF MPs sat passively. Three sentences into the actual speech, EFF secretary general Godrich Gardee rose on a point of order. Zuma ploughed on with his speech pretending not to hear, while Gardee insisted on his point of order. Mbete apologised to the president and asked him to sit down.

“We are asking the president when he is going to pay back the money.”

There it was. The moment that had been anticipated for weeks. The apex of our national discourse. The collection of words that inflames high emotion and mayhem every time they are uttered in that House.

Zuma sat behind the podium watching expressionless as pandemonium ensued. The EFF did what they came to do – insisted on asking when Zuma would pay back the money for Nkandla. Mbete said repeatedly that this was not the occasion to ask the question. Eventually she ruled Julius Malema, Floyd Shivambu and Mbuyiseni Ndlozi out of order and asked the Sergeant at Arms to remove them.

Photo: Special security police who will be on duty inside the National Assembly arrive for the opening of parliament ceremony and the president’s State Of the Nation Address in Cape Town, South Africa, 12 February 2015. EPA/NIC BOTHMA

The scenes that followed were surreal. Lines of men dressed in white shirts and black pants filed in from every entrance. EFF MPs congregated around Malema and Shivambu to protect them. The security officials – it is not clear who they were – grabbed the EFF MPs, punching and hitting them, dragging them one-by- one out of the chamber. The EFF MPs tried to resist with some fighting back. Malema and Shivambu were the last to be dragged out, as ANC MPs applauded and cheered.

Mbeki and De Klerk leaned forward in their seats watching from above, as did Madonsela. All of them bore stunned looks.

Photo: FW de Klerk sits in the gallery during the address. (Greg Nicolson)

Zuma was still sitting at the podium, watching. Daily Maverick’s Greg Nicolson captured a picture of the president laughing after Shivambu and Malema were assaulted. Around him was a phalanx of VIP protection officers, all of whom are members of the South African Police Service, all armed. They left only when all the EFF members were removed.

The DA protested the violence against MPs and the presence of armed men in the chamber, and staged a walkout. The United Democratic Movement, Congress of the People and Agang also left.

Zuma returned to reading his speech when things settled down, beginning with a hearty laugh. But the House remained pensive and on edge. He won the day over the opposition parties but he lost the attention of the House and the nation.

Zuma spoke on interventions on the electricity crisis, a new agricultural trade agreement with China, the national minimum wage, planned developments in the mining sector, assistance to SMMEs, a turnaround strategy for South African Airways, new water projects, road maintenance programmes, the construction of new colleges, and a partnership between government and the banks for the processing of smart ID cards.

These were all announcements South Africa needed to hear so that the president and his government could be held accountable for their implementation. But who could focus on them after the foundations of our democracy had been shaken minutes before?

Minister in the Presidency Jeff Radebe said afterwards at a media briefing that government was “disappointed and disgusted at the despicable conduct” of some elected representatives. “Government is flabbergasted at the shameful conduct of those who claim to be representing the needs and aspirations of the electorate,” he said.

Radebe said he was not aware of the involvement of the Department of State Security in the arrangements around Parliament, including the scrambling of the cellular networks. He could also not provide information about the security officials who forcefully removed the EFF from the House.

In the days to come, there will be more obfuscation, with all parties involved trying to justify their actions. It will never be adequate. Nothing can ever justify the damage caused to the country and its institutions in this massive political fallout.

South Africans were shocked to the core by what happened because we are a nation of decent people with a common desire for peace, safety and prosperity. There were dozens of opportunities to prevent the chaos, a multitude of escape routes, plenty of configurations of words that could have been spoken to make it go away.

But Nkandla is our new lodestar; it defines the state of our nation more than anything its principle resident could ever have said on Thursday night. It overshadows, obscures and dims the light on all that is positive.

We live in the country where the infrastructure, especially the electricity system, is on the verge of collapse and could physically cripple South Africa for decades to come. The injustice of our inequality is making us spiral towards a state of instability. The fundamental unfairness of our daily lives and livelihoods threatens to tear apart the fabric of our nation. This was the moment, this was the fork in the road where we needed to consciously decide to stay together, to join all our forces of inner goodness, our intellectual capabilities and skills, our will to fight against adversity. Above all, we needed to repair what was torn and find ways to deal with our frightening problems.

Thursday, 12 February 2015 was not such a day in the life of our nation; it left us all feeling polarised more than ever. It was the day our country broke. It became a tragedy and a farce, an occasion to weep and perhaps remember what we used to be, what it meant to be a proud South African.

We may never get that back. DM

Main Photo: The second EFF were driven out, there was a cheer from the ANC. And President Zuma, surrounded by his own security, chuckled. (Greg Nicolson)