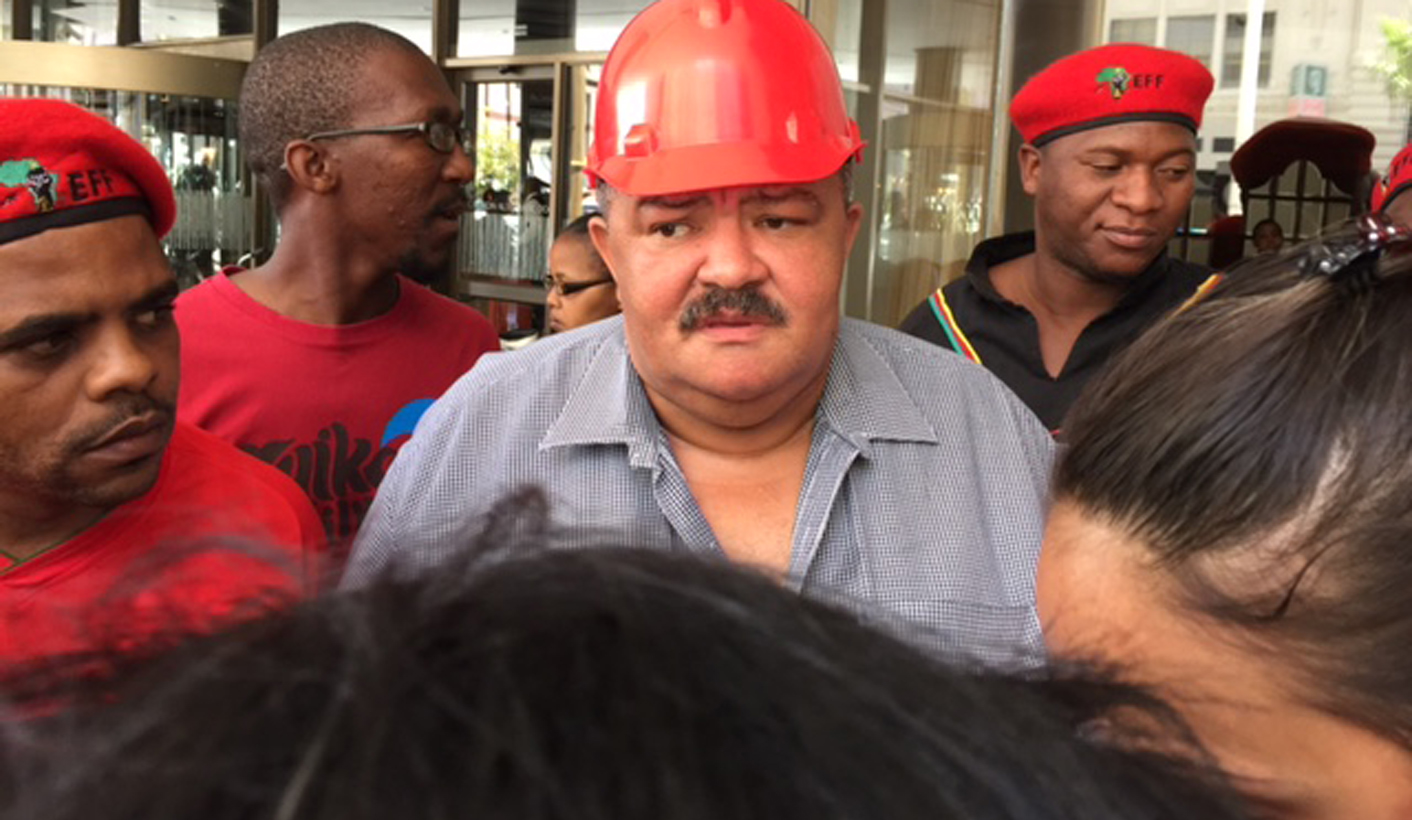 You have to wonder what they were thinking. Economic Freedom Fighter MP’s Andile Mngxitama and Khanyisile Litchfield-Tshabalala called a press conference at the Cape Sun for noon on Thursday, in order to address their schism with leadership. It descended into a brawl, and then a chase through the streets of Cape Town, where red-kneed German tourists encountered red-shirted Fighters in one of the more incongruous moments in the city’s history. By RICHARD POPLAK.

Andile Mngxitama’s political naiveté can be charming. Occasionally, however, it can be dangerous. Thursday afternoon belongs to the latter category. Mngxitama, along with Fighter Khanyisile Litchfield-Tshabalala, gathered reporters in the Cape Sun for a noon press conference, which would address the issue of why he won’t be yelling “Pay Back the Money” at the State of the Nation Address. Or alternatively, depending on whom you believe, he was going to tell us what he saw in a cache of material ex-gangster-turned-self-help guru-Gayton Mackenzie has apparently been keeping on Malema. If the latter was indeed true, how Mngxitama believed his press conference was going to be successful/peaceful is a mystery that will take a lifetime to unravel.

Regardless, the faithful who forewent lunch for this event encountered about forty or so young men and women in EFF regalia, which seemed like an odd thing for a media thingee. It soon became obvious that these were Malema’s people, or more properly, they were members of the Western Cape caucus who were not at all happy about an unscheduled press conference being called on their turf.

At about 12:30 the presser was called to order, the journos present rubbed their hangovers from their eyes, and Mngxitama and Tshabalala took their seats. Tshabalala, and ancient warrior, an ex-admiral, looked sad and exhausted and disappointed, as if this latest attempt at rigging the revolution had taken everything out of her. Mngxitama leaned back in his chair, perhaps organising his thoughts, perhaps fashioning an escape plan. It soon became clear that he needed one: when the Fighters in the crowd were asked to leave, they refused to do so. “We are going nowhere, chief,” said the gentleman in red next to me, who only a few moments earlier had urged me to join the movement. “No one is going out, man.”

To avoid a showdown, it was decided that the Fighters should stay, but they were asked to keep quiet whilst Mngxitama and Tshabalala shared their grievances. That seemed, to this reporter at least, like an unlikely scenario. And indeed, just as the conference was about to begin, the EFF’s Western Cape caucus leader, Bernard Joseph, stood and cleared his considerable throat. Joseph is an huge, lugubrious man, who was dripping sweat under his hardhat. His voice rumbled through the small, hot room like something from across the ages.

“This is causing a situation like COPE,” said Joseph slowly, referring to the all-but-dead breakaway party that took almost 10 percent of the vote in 2009. Joseph was a COPE member, and he was not going to see a repeat performance by the EFF. “They do not have a mandate from the caucus,” he explained. “And they do not have a mandate to do this conference from the General Secretary or the CiC of this organisation.”

And therefore, this presser was not going to happen.

Joseph was begged to back down. But he would not. His people got up and started singing. Mngxitama’s (much smaller) contingent asked them to be quiet. Then it became clear that some of the men who had joined Joseph had a certain hardness in their eyes, access to rage, and perhaps something more than rage. They lunged forward in tight mob, reached for Mngxitama as he left the stage. As they came for him, he acknowledged their rage with something like sadness, and backed up. They lunged further, threw punches, ripped at his EFF golf shirt.

All of the miserable ugliness about how humans organise themselves was on display—it was an education in raw, unadorned politics. We followed Mngxitama and his contingent down the two escalators that took him from the muted money of the Cape Sun into the harsh light of the Cape sun, where he was pursued all the way to his econo-car. The German tourists with cameras dangling around their necks looked around in abject confusion. One pointed mutely at a Fighter in a red overall, and then at me for an explanation.

Dude, I don’t have a day and a half to explain this stuff to someone from Dusseldorf.

After it was all over, Joseph stood with his posse on the island in the middle of Strand Street like some beached creature from the deep. I asked him who decided to disrupt the presser. “The decision came from the provincial membership,” he told me. “We are required to deal with those people who divide this organisation. We feel national leadership has been dealing weakly with this stuff. We should be in Citrusdal, where there is a land occupation by our members, not dealing with this press conference.”

Is this a sign of a drifting EFF, I asked, a schism that could fell the party?

“No,” said Joseph. “We are very strong. I got the call at 12 o’clock last night, and we mobilized quickly to deal with this now. We can’t allow this to happen. We will deal with it harshly.”

“We will moer them,” he said, using the cheerful Afrikaans colloquialism. “Violence if necessary. We won’t be held at ransom by these people.”

And so Joseph and his contingent returned to the Cape Sun, to where the complimentary shoe shine and commuter bikes waited for the baffled Germans. Mngxitama tried to hold the presser in a second secret location, leaking to the press that he and Tshabalala believed that the EFF were willing to compromise with the ANC on a SONA disruption by selling MP seats. You know, politics—the ugly, messy, horrendous work we do in order to keep ourselves from slipping back into savagery. That it occasionally looks exactly like savagery is where the science becomes an art—there was raw poetry in the brawl that sent Mngxitama into the streets of the Mother City, and its discordant music was a reminder that at this, only the very toughest of bards get to keep their quill. DM