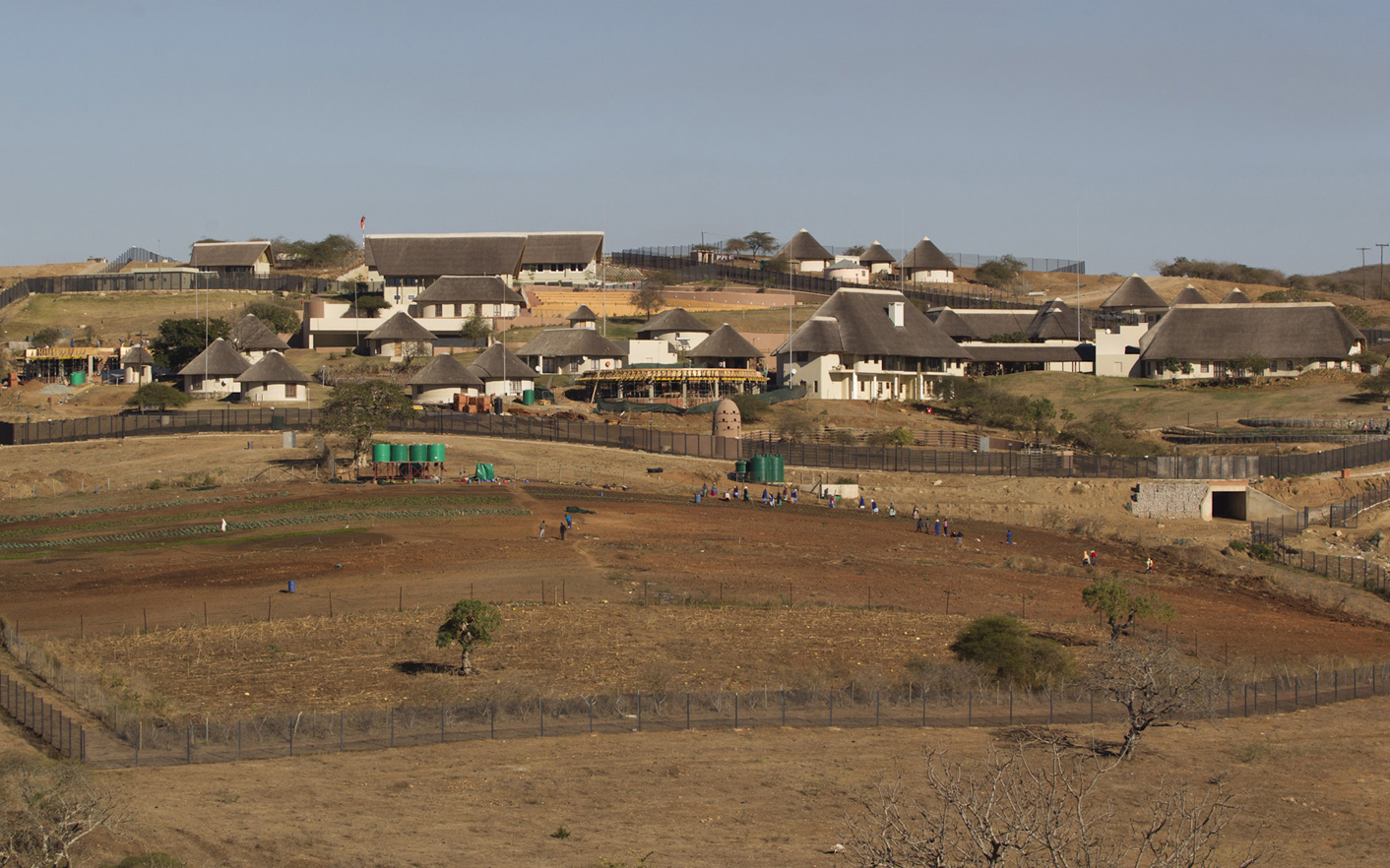 The Special Investigating Unit's R155-million civil claim against Minenhle Makhanya, President Jacob Zuma’s architect on his Nkandla residence, could be poised to collapse, according to his attorney Barnabas Xulu. The possible game changer came this week when the architect was informed he would have to personally apply to declassify documents he believes are intrinsic to the case against him. By GLYNNIS UNDERHILL.

When architect Minenhle Makhanya was slapped with a R155-million civil claim by the Special Investigating Unit last year for the excessive spend on President Jacob Zuma’s Nkandla residence, it looked like the stage was set for him to be the fall guy in the fiasco.

The mood shifted this week when the Director-General of the National Department of Public Works, Mziwonke Dlabantu, filed papers in the High Court in Pietermaritzburg, opposing the release of classified documents which Makhanya believes he requires to defend himself against the claim.

“The official documents sought by the Applicant (Makhanya) are not intended to plead and the request is, with respect, no more than a fishing expedition by the Applicant,” Dlabantu wrote in his answering affidavit on behalf of his department, the second respondent in this application. “On the day of the hearing of this matter, it will be argued on behalf of the Second Respondent (Public Works) that the application is making various efforts to obfuscate the issues and undermine the action which has been instituted against him for the recovery of monies due to the State.”

Makhanya’s attorney Barnabas Xulu told Daily Maverick that the National Department of Public Works was saying his client would have to personally seek the declassification of documents he required to defend himself.

Yet he said these were relevant documents on which the Special Investigating Unit was relying in their prosecution of Makhanya. “It is outrageous that my client is being asked to seek the declassification of all these documents, which he requires to defend himself against the claim. He is not the one who instituted the claim,” said Xulu. “I think the case against my client could collapse because in the absence of them furnishing these documents, the case would at a later stage have to be struck off the roll.”

Well-versed in representing high-profile clients, Xulu was called in by Makhanya to take over his case. Before setting up his own legal firm in Cape Town, the politically-connected Xulu once focused his attention on raising money for Zuma’s long-running legal battles against his corruption and rape charges, and helped set up the Friends of Jacob Zuma Trust. His clients now include controversial Western Cape Judge President John Hlophe, who has been involved in marathon legal battles.

The latest court developments affecting Makhanya comes at a time when the Special Investigating Unit is soon to be without a head. Advocate Vas Soni, who oversaw the Nkandla investigation, quit last month in a surprise move after only 16 months on the job. At present he is in back-to-back meetings and preparing for a handover, but finding a new head could take time. Whether the instability at the Special Investigating Unit could affect the civil claim against Makhanya remains to be seen.

In his affidavit to court, Dlabantu explained how he was in possession of, and the custodian of all the official records of the national Department of Public Works, including all the official documents relating to the Nkandla Project for the installation of security measures for the safety of the President of South Africa and his family in KwaZulu Natal.

As part of his post, he was also the Information Officer in terms of the provisions of the Promotion of Access to Information Act (No 2 of 2002), which regulates the provision of and the request for official information which is in possession of a state institution.

Dlabantu said it became clear in the Notice of Motion dated 17 October 2014 that Makhanya was seeking an order against either the Special Investigating Unit, or the National Department of Public Works, for documents to be furnished to him.

Certain official documents listed by Makhanya were classified documents, and could not be given to him in terms of the law, he said.

“It is these two institutions which have classified the documents in question, and it would be improper for National Department of Public Works to declassify them, and hand over to the Applicant (Makhanya) for use in the main action.”

Makhanya would be free to seek these documents from SAPS and SANDF by utilising the official procedure set out in the Promotion of Access to Information Act (No 2 of 2000), said Dlabantu.

“The National Department of Public Works is simply the custodian of these documents because they were necessary information for the installation of the security measures in the residence of the President at Nkandla. The Applicant (Makhanya) is free to utilise the official procedure set out in the Promotion of Access to Information Act should he desire to utilise them in the main action. The Second Respondent (Public Works) cannot predict the official response of the SAPS and SANDF to such an official request.”

Dlabantu expands further, saying the documents were of an “extremely sensitive nature”, to such an extent that the disclosure would expose the safety of the president, and his family, and defeat the entire purpose of installing security measures at the residence of the president. “The exposure of this highly sensitive information would definitely also expose the president and his family to serious risk and harm because the general public, or certain category of members of the general public, would become privy to such information.”

Some of the classified documents authored by the SAPS and the SANDF and requested by Makhanya bore no relevance to the “reasonably anticipated issues” on the main (civil claim) action, he asserted.

Many of the documents required had already been furnished to Makhanya’s legal representative, Dlabantu said.

However, Xulu said none of these documents supplied to him had been of help in preparing his client’s defence against the claim.

Some senior officials from the National Department of Public Works who were implicated in the irregularities related to the implementation of the Nkandla project have now been charged departmentally with various acts of misconduct.

Asking for leave from the court to condone the late filing of his answering affidavit, Dlabantu said these internal hearings had made it difficult for his department to get officials to locate and identify the documents sought by Makhanya.

While the Special Investigating Unit decided to go after Makhanya, with the National Department of Public Works as the second defendant in the R155-million claim, the Public Protector recommended Zuma pay back an unstipulated amount of money.

In her Nkandla report, Secure in Comfort, Thuli Madonsela found that Zuma had derived undue benefit from the improvements made to his homestead, with the estimated costs of the upgrades standing at R246 million. Zuma said recently that no questions on Nkandla should be allowed until the parliamentary ad hoc committee, set up to discuss the Public Protector’s report, had made its finding.

Madonsela revealed that Makhanya had been introduced by Zuma to the National Department of Public Works, which then appointed him as its Nkandla principal agent without first putting the post out to tender. The architect made R16.5 million from the Nkandla Project, she said.

During interviews with Madonsela, Makhanya battled to explain why various items that could not be regarded as security measures had come to be built at Zuma’s private home. These luxury items added to the government’s Nkandla bill, and included an amphitheatre, a kraal with a chicken run and a cattle culvert, a visitor’s centre, extensive paving, a swimming pool which police commissioner Riah Phiyega at first attempted to describe as a “fire pool”, and the relocation of Zuma’s neighbours.

If the Special Investigating Unit civil claim is not eventually struck off the roll, as Xulu predicts, Makhanya could soon find himself crippled by ongoing legal fees. Dlabantu did not hide what he believed lay ahead for the architect in his court affidavit: “The Applicant (Makhanya) is making delaying tactics to avoid imminence of a colossal judgment against him.” DM