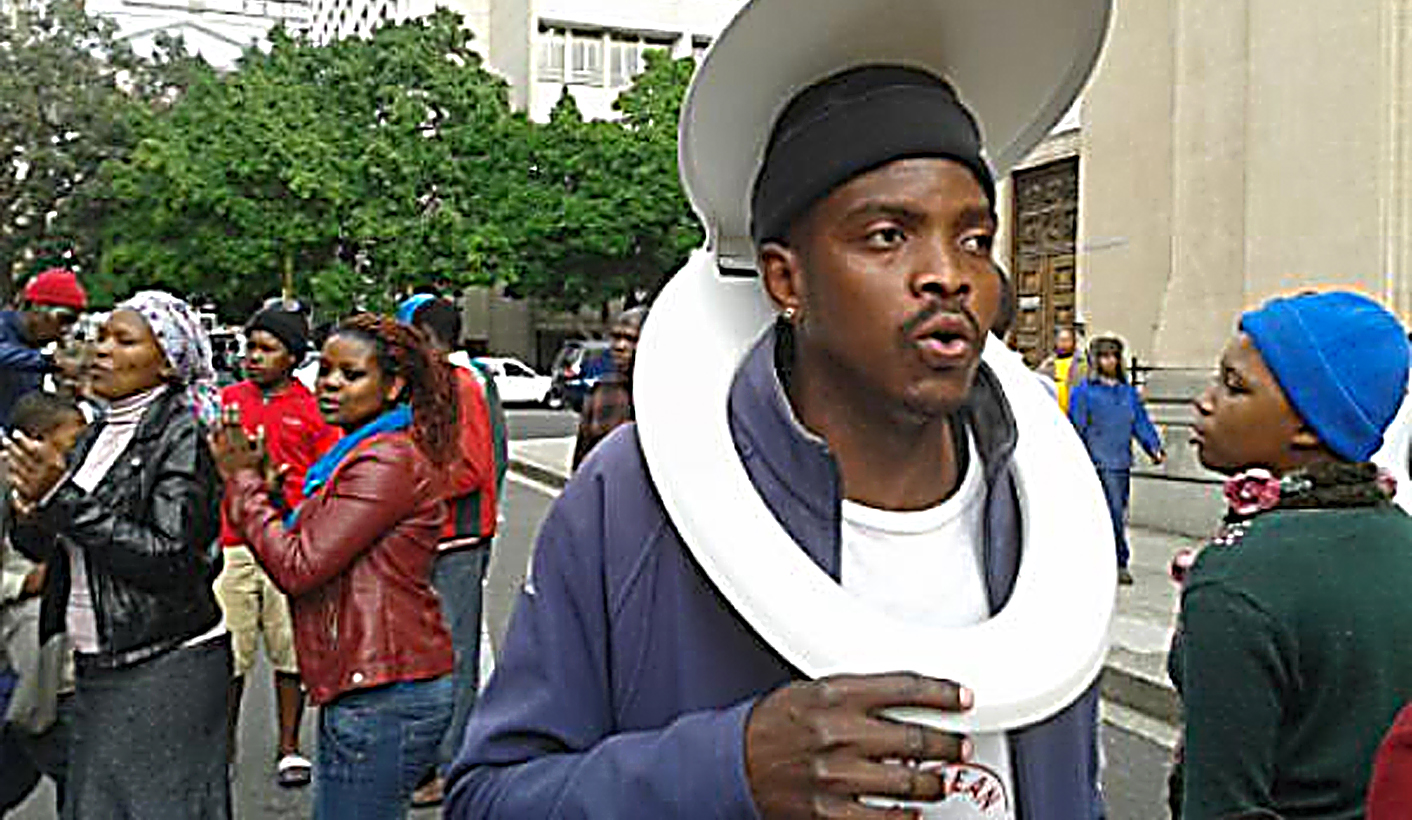 A Cape Town magistrate has convicted ten activists from the Social Justice Coalition (SJC) for convening an illegal gathering. Although they were discharged with a caution, the group has vowed to appeal the conviction, and to have the Regulations of Gatherings Act declared unconstitutional by a higher court. By Daneel Knoetze for GROUNDUP.

The struggle songs that SJC members sang outside court after the convictions were louder than they had been at any stage during the trial, which started in July last year.

“This is not the end,” said Phumeza Mlungwana, the group’s general secretary, from the periphery of the toyi-toyi.

“The magistrate herself agreed that our protest was peaceful. This is a clear indication that the Act under which we were convicted is unconstitutional, and does not protect our right to peaceful assembly.”

In handing down judgment Magistrate Alta Fredericks confirmed the defence’s argument that a protest, held outside Mayor Patricia de Lille’s office on 11 September 2013, was non-disruptive to members of the public. She acknowledged that it was peaceful and disciplined.

On that day, Mlungwana and fourteen of her colleagues chained themselves to the railings at the Civic Centre and demanded that De Lille come to meet them. The protest, described as a last resort by the activists, was against what they believed was the Mayor and the City of Cape Town’s failure to properly implement a janitorial programme aimed at cleaning and maintaining flush toilets in Khayelitsha.

Fifteen is the maximum number of people allowed to gather without the leaders of that group giving prior notice to local government, according to the Act. When other members of the SJC joined Mlungwana and her colleagues during the course of the protest the number of protesters exceeded fifteen. De Lille did not meet the protesters. Police officers cut the chains, arrested a total of 21 protesters and charged them with contravening the Act.

During the trial a core group of ten SJC members, including Mlungwana, accepted that they had convened the gathering without giving notice. The remaining eleven, who had merely confessed to attending the gathering, were acquitted today.

But, central to the ten conveners’ “not guilty” plea was the defence’s argument that the very law under which they were being tried was unconstitutional – in that it undermined section 17 of the Constitution which guarantees the right to “peaceful and unarmed” assembly.

Last week defence attorney Steven Kahanovitz explained to GroundUp that the Magistrates’ Court cannot rule on constitutional matters, but a challenge of the law is possible via an appeal to the Cape High Court. If successful, the appeal would see the High Court agree on the unconstitutionality of the law – a decision that would finally have to be confirmed by the Constitutional Court in Braamfontein, Kahanovitz said.

This, the SJC hopes, could be a prelude to the Act being amended or scrapped altogether. “The SJC usually campaigns around localised issues, but in this case we will not launch this appeal with our own interests at heart,” said Mlungwana.

“This issue goes far beyond our court case. As it stands the law can be used to stifle the right to peaceful protest everywhere, whether it be in King William’s Town or Jo’burg. We now have criminal records. The court has criminalised us for exercising our Constitutional rights. We will challenge this and bring that law down, so that activists can be protected across the board.” In spite of the convictions and his agreement with Mlungwana, convicted SJC member Zackie Achmat said that the judgment was a “favourable” outcome.

Charges against ten of the accused did not stick and Fredericks decided only to issue a “caution” to the convicted members. This was a lighter punishment than the defence’s suggestion of a nominal suspended fine and a week’s worth of community service.

“These are already people who work to serve their communities, so a sentence of community service would serve no purpose,” Fredericks said. DM

Photo: SJC activist Luthando Tokota outside the Cape Town Magistrates’ Court in July 2014. He and 20 others stood trial for unlawfully convening and attending a protest at the Civic Centre in September 2013. Photo by Daneel Knoetze.