Naledi: A community following its very own lucky star 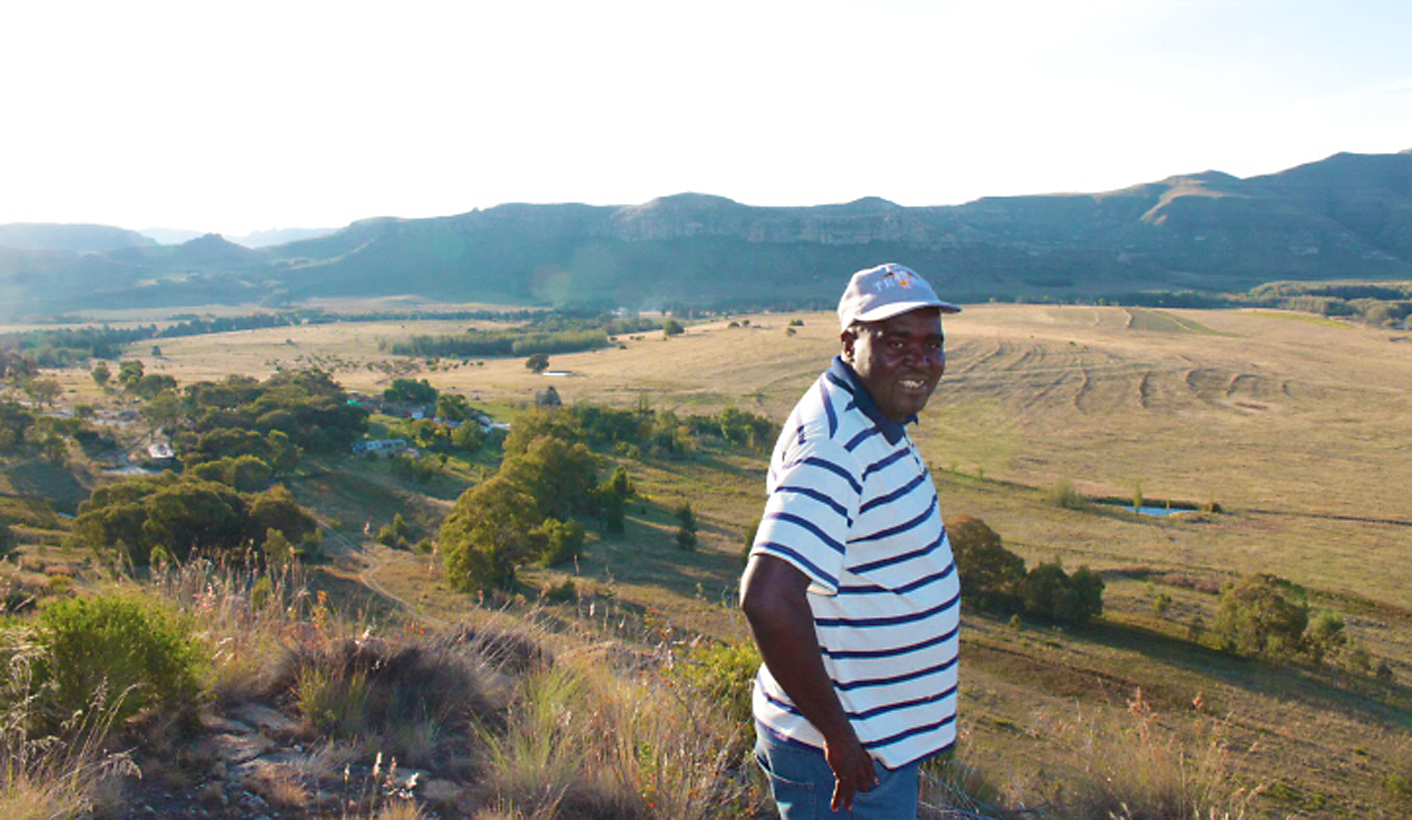 Twenty-five years ago, Nelson Mandela walked out of a jail a free man. His legacy is a complicated one, nowhere more so than in a Free State village still trying to work through land issues. RICHARD POPLAK marks a quarter-century anniversary in Naledi, Eastern Free State Highlands.

Naledi, population one hundred, sits a few kilometres from the Lesotho border, in the shadow of the Maluti mountains. It is, I suppose, a typical rural South African community, nestled between the past and the future, between Apartheid and whatever has followed. Naledi’s inhabitants have always worked the enormous farms belonging to white men, but until very recently, no one in Naledi owned any land. If the neighbouring farmer was benevolent, then the villagers were safe. If the farmer was an asshole, then they were not safe at all. Recently, after a local landowner sold a vast parcel of property, eight families were removed from their homes and relocated to the side of the road. Not unlike cattle, no one asked how they felt about the situation. Naledi had no electricity, water was brought in by truck, and the local school has a budget of R3,000 a year.

Nonetheless, Naledi votes ANC. If this sounds odd, given the situation described above, it’s markedly less so in practice. When I took a drive with Anton Chaka, chairman of the Naledi Village Committee, he described how life had changed over the past 25 years. For one thing, he told me, the villagers were no longer barred from walking on the mountain embracing their birthplace like a necklace of granite. For another, they didn’t need a letter of permission from a farmer to leave for work, and they didn’t need to give the farmer six weeks of free labour in exchange for that letter. Most importantly, they had secured forty hectares of farmland from an NGO that would purchase their surplus in order to supply a high-end lodge with organic veggies. If life had not transformed, it meant something different now. And if the government had not given them much, it had given them the right to ask for more.

Was Anton’s optimism misplaced? Were Naledians backwater folk ignorant of the systemic failures of the South African state under the ruling party? No, sir. The village was arguably more cosmopolitan than most urban South African neighbourhoods. In the seventies and eighties, hippies descended on the valley to drop acid and shake their genitals at the moon. An ayahuasca shaman who called himself Nishuwaka built a community on the hill, and Anton Chaka once took a shvitz in his sweat lodge. Many of the older men worked the mines, and still spoke Fanagalo. There were Zimbabweans, Americans, Brits, Canadians and Indians working the valley, farming, canning, running lodges, polo clinics, and generally participating in a diverse economy that dipped and dived with the cultural trends. Everyone here was well versed in NGO-ese. No one had any illusions about Jacob Zuma’s numerous misadventures.

In other words, nowhere in South Africa on the 25th anniversary of the end of Mandela’s Long Walk is simple. The country exists in a state of complexity that constantly threatens to shred it apart—a situation that may have seemed impossible on the eve of his release, but was already in the making ages before he walked free. The factionalism in our politics was well established, the fight against Apartheid was nowhere near as simple as black against white, and the global village that called for the regime’s dissolution would end up taking its pound of neo-liberal flesh. When Mandela dumped his prison garb for a three-piece suit, he created a universe of symbols in order to save us from ourselves, and the first symbol was that of a man leaving jail “free”, even though few men have been less free, and few faced more daunting responsibilities.

In Naledi, Mandela remains a hero, even if he is a fading one. There is no Madiba iconography on the village walls, no images of our first president in lodge offices. Sure, there are four-dozen copies of Long Walk to Freedom rattling around in the valley, but democratic South Africa’s Ur-text is as ubiquitous as the St. James Bible. In the schoolhouse, where every January the teacher must introduce six-year-olds to the concept of a pen, Madiba is firmly entrenched in the curriculum. But over a year after his death, his legacy suddenly feels malleable, subject to revision. His history, as it becomes History, loses its power.

Moving forward, of course, means securing land tenure, and on this issue it is difficult to locate even Madiba’s shadow. The NGO that gave Naledi forty hectares is pressuring other valley farmers to contribute land to a trust operated by a rotating council of four locals, their appointment subject to an election process that reminds one how established both democracy and communalism are in rural South Africa. But it also reminds us how unfinished are the discussions around Freedom Charter fundamentals—the land does not belong to everyone, it never has, and tricky ownership equilibrium that the ANC has introduced over the years satisfies neither the commies nor the capitalists. Willing buyer, willing seller remains a joke. And the jackals are circling the uncertainty.

Which brings us, of course, to the febrile jitters around this week’s State of the Nation Address. Jacob Zuma, photocopy of a photocopy of a liberation politician, will stand up and try to drone his way through a speech. The upstart revolutionaries, claiming to surf the diminished wave of the Freedom Charter will attempt to disrupt him. The parliamentary decorum that Mandela relished and upheld with almost fetishistic reverence was turfed into the Indian Ocean last year, and it’s only going to get worse. The politics of discord have become the new normal. A different era is upon us, one that isn’t so much writing Mandela out of the conversation, but one that is owning up to the fact that he never participated in several of the conversations that counted most. And that will have to do.

At the dawn of democracy, Anton Chaka did something everyone in the village thought was foolhardy: he built himself a house. He knew that if a farmer bulldozed it and chased him off the land, he’d get away with only the windows and the zinc roof. But he was willing to take that risk, because he didn’t want to spend his life in a shack. Now, over twenty years later, the village owns the land on which Chaka built his house. “It ended up being a good bet,” he told me.

Real estate is always a bet, but Chaka might as well have built his house on a rain cloud. Yet this country has always been fertile ground for hope. Twenty-five years after Mandela walked free, and a new time truly is upon us: there will be no more big men to save us, and we have to navigate the state’s complexities with our own smarts, making our own demands, free but not free. Indeed, if Mandela’s release taught us anything, it is that freedom was a species of bondage. It makes constant demands, and demands constant vigilance. It means becoming custodians of our own lives; it means rejecting the notion of further Mandelas; it means a proper historical assessment of Mandela himself. No beatifications, no canonisations, no shrines.

And in this, Naledi can be said to be fully awake. Many fights to come, but someone like Anton Chaka simply gets on with it. He bets on himself and his community, and he bets long. And if freedom is anything, it’s the ability to bet on oneself.

“You could say I got lucky,” Chaka continued, “but I don’t think it’s only that. We’ve worked hard down here. Slowly, slowly, everyone is changing.” DM