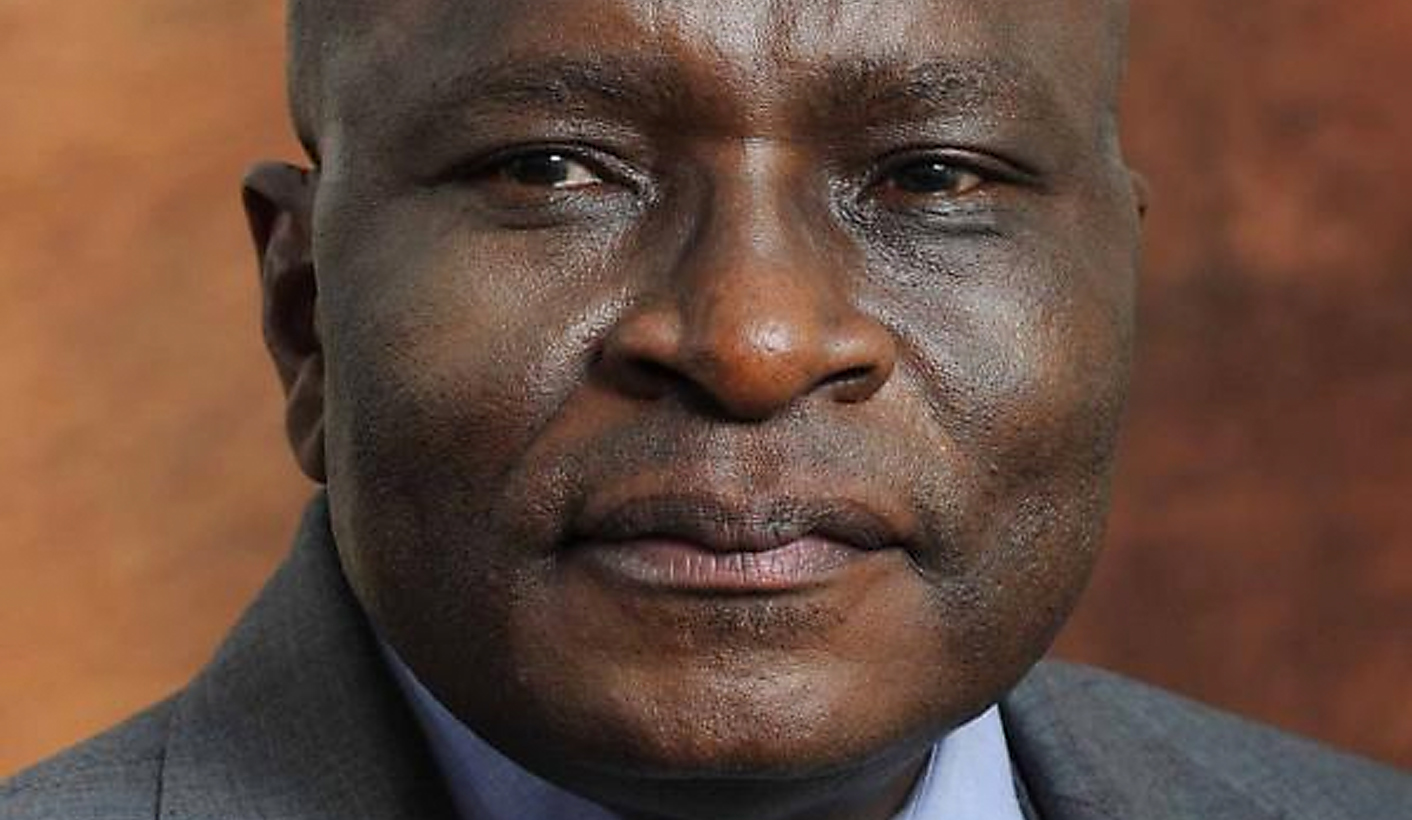 While the ANC might have dusted off the Freedom Charter at its 103rd birthday celebrations and is employing political theatre and populist rhetoric to redirect public attention away from a boisterous but small left-leaning political competitor, Minister of Mineral Resources, Ngoako Ramathlodi, sang from the NDP and constitutional hymn sheet at the Mining Indaba yesterday. By MARIANNE THAMM.

If you want evidence of the gap between the spectacle of populist campaigning out in the streets and the more sober business of realpolitik, you have to go down to where government ministers do the work of explaining government policy and direction to the people at the top end of the economic pyramid.

And there were a fair number of them in the audience at the Main Stage at the Investing in Mining Indaba in Cape Town yesterday where Minister of Mineral Resources, Ngoako Ramathodi, delivered his official welcome.

Seated in the darkened auditorium were thousands of well-heeled potential investors with apparently deep pockets who are keen to plough this into the country’s key industry – mining. In this regard the minister’s spin was quietly confident and reassuring.

“May I take this opportunity to reiterate the message that South Africa is ready for investments. In the past 20 years, we have built a stable constitutional democracy underpinned by the rule of law and a justiciable bill of rights. This is further reinforced by a strong monetary and fiscal regime and an independent Reserve Bank, which have assisted us to navigate rapid and sometimes difficult changes in the global economy,” he told those gathered.

Later at a press conference, the man who once described the country’s Constitution as “a compromise” that “tilted heavily in favour of forces against change” and that emptied the “legislature and executive of real power”, appeared to have had a change of heart.

“If anybody thinks that government can, at any time, violate rights vested in the law with impunity, they are making a mistake,” he explained to journalists in relation to the decision to refer the Minerals and Resources Amendment Act back to Parliament so that it “meets Constitutional muster”.

The minister reassured the audience that government was aware of “power challenges” in the country and that there was “no mining without electricity”. While collectively supporting Eskom to attain a long-term sustainable financial solution and committing R1 trillion into infrastructure development, paying particular attention to energy, the minister said government was also finalising regulations to allow for private coal power stations, which would be allowing renewables to operate as well as developing nuclear energy.

“By the way, we are not – South Africa – new to nuclear energy. We are reactivating capacities that we had abandoned at the dawn of our democratic dispensation. Here in the Western Cape we have Koeberg, that fuels an element of the electricity needs of the country.”

However, he added, the country’s “crowning glory” was the Great Inga project in the Congo, where South Africa has signed an off- take contract for 2,500 mw annually by 2023.

At the end of his address the minister diverted from his official speech, addressing last year’s crippling strike in the platinum sector and seeking to reassure investors that “in future anyone resorting to violence will be arrested, charged and sent to jail. There is no turning back on that”.

“We will not see a repeat of that because it was an exception to the rule and we decided to take extraordinary measures to end it. We brought political office into the dispute resolution process and we stopped it. Should it repeat, we will take the same process. You can’t allow parties in a conflict contestation to engage in a life and death conflict,” he warned.

Reiterating a recent announcement in London with regard to restoring South Africa’s global mining reputation and status, the minister said he was in conversation with the industry with the intention of establishing a new South African-based mineral “National Champion”.

This is in the wake of restructuring and unbundling by some of the industry’s major players and “rather than bury[ing] our heads in the sand, we have decided to take advantage of the new situation and turn what would have been adversity into advantage.”

This new champion, he said, would be community-based with strong worker participation and run along business principles. Leadership would need to be prepared to stay for “the long, long haul” and “not leave the flock in the veld and run for greener pastures once the enterprise is established.”

It was not yet clear whether this could be a “single commodity creature or a multi-commodity enterprise” but one thing that is certain, he said, is that it would be “broad-based.”

“The era of individual empowerment is gone. We are leaving it to out history books,” he said.

Ramathlodi said that the Indaba was occurring at a time when the recently released Oxfam report revealed that the gap between the rich and the poor had grown to alarming proportions.

This was a Pikettyesque world where one percent owned 44 percent of the world’s total wealth against the 99% impoverished majority with increasing unemployment, especially among the youth.

“We are also witnessing difficult times for the broader mining industry, characterised by plummeting commodity prices, perhaps unprecedented in some respects, where the price of several minerals has conspired to collapse at the same time. This gloomy environment is bound to colour deliberations of the Cape Indaba 2015.”

The wealth gap, he said, was not only domestic in individual countries but also between developed and developing countries, and the African continent in particular, despite holding some of the largest reserves in extractable minerals.

“For instance, between themselves, South Africa and Zimbabwe produce 80% of the world platinum. The continent is the least beneficiary of the mineral wealth generated from its bowels. In order to remedy this situation, the AU head of states and government summit adopted the Mining Vision for Africa a few years ago, which emphasises the dire need to benefit producing countries and host communities, where extraction is taking place.”

South Africa’s constitutional democracy had a good story to tell, but the “blight” was the country’s high levels of unemployment and inequality accentuated by legacies of the past.

“In order to resolve these challenges, we have adopted the National Development Plan, which is a road-map towards a future of plenty for all.”

The government, he said, was aware of the centrality of mining to the economy of the country and was determined to provide a stable environment through, among other measures, the establishment of a forum – the Mining, Growth, Development and Employment Task Team (with the unfortunate acronym MIGDETT) – where his ministry and labour were engaged in “ongoing conversations” to resolve challenges. The forum, he said, discusses meaningful economic participation for employees and communities, human resource development and health and safety.

Government, he added, was in the process of reviewing progress of the objectives of the Mining Charter, a legal instrument enabling transformation in the industry and results of this review would be released by the end of March.

He reassured government’s commitment to “providing regulatory certainty” to those who have already invested in the country and those who planned to do so.

“I have welcomed our president’s decision to refer the Minerals and Resources Amendment Act back to Parliament so as to ensure that it meets Constitutional muster. This provides us the opportunity to separate the oil and gas part of the Bill from the part dealing with traditional minerals. In this regard one is aware that the passage of the bill is a key that unlocks investments. Speed is of the essence and we are open to short-term arrangements provided they provide desired outcomes.”

The minister also said government hoped to close the debate around the developmental price.

“I want to open the boil now so that there is no comeback on policy issues, in the foreseeable future. In the current draft, the developmental price is set at the mine gate price and this is being contested vigorously. I want us to bring finality to this issue one way or the other, guided by the policies of government, interaction with the industry and legality.”

Legality, he said, was the main reason the president referred the bill back to Parliament.

“Accordingly, I am seeking counsel on possibilities of testing some provisions of the bill with the court upfront. The beauty of our country is respect for the rule of law. Anyone feeling short-changed or aggrieved is free to approach our courts, including the constitutional court. I think this provides the biggest policy security for any person; I cannot give you any better clarity on this policy issue. Our policies are justiciable. I trust that this is as clear as the blue skies of South Africa,” he said. DM