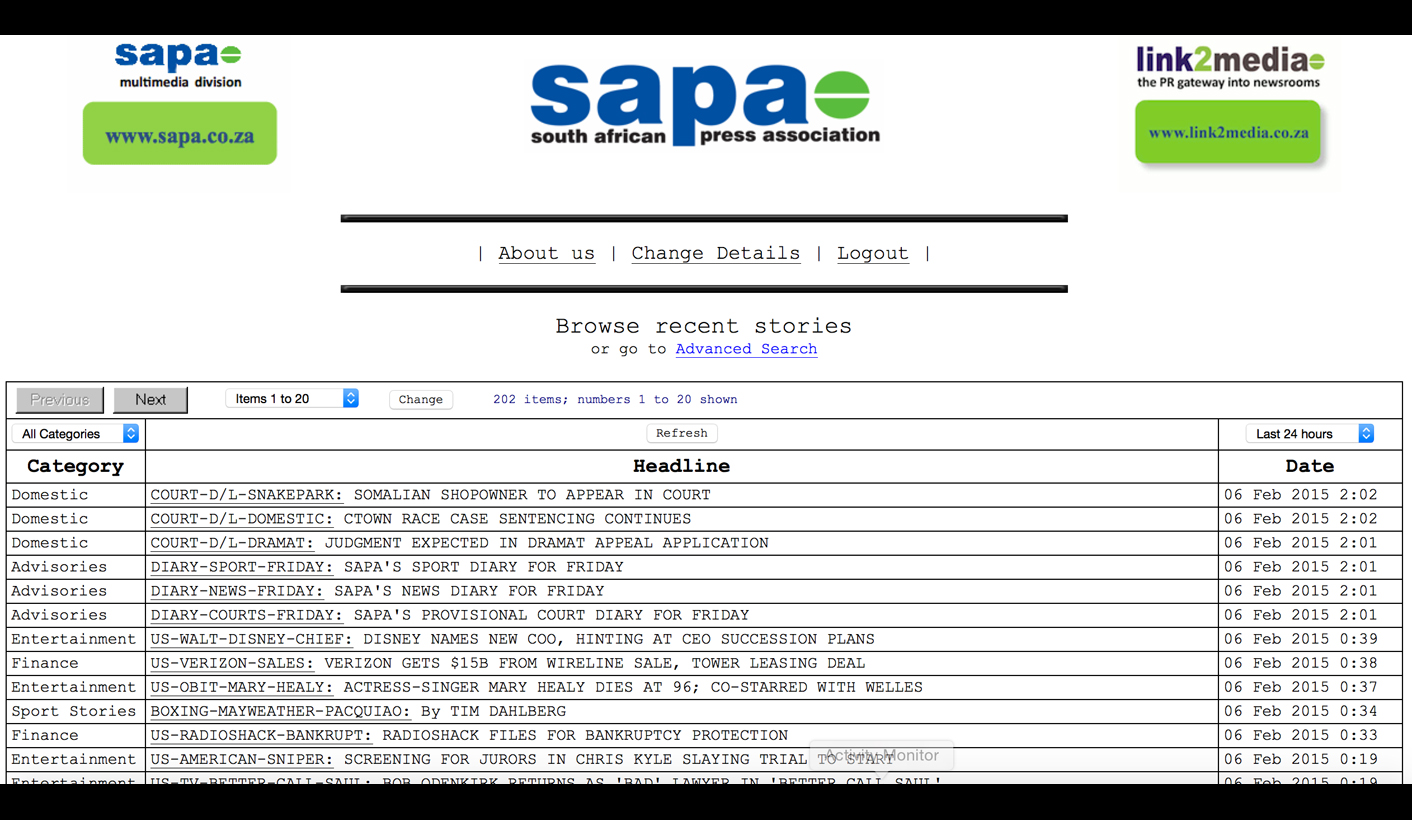 The South African Press Agency (Sapa) will deliver its final story at midnight on 31 March, reported Sapa on Thursday. Although it has existed since 1938, the loss of the independent wire service was expected to a degree. Still, it has come as a shock. As media organisations combust around the world, the trend takes shape in South Africa too, which waits to see what will emerge from the fire. By GREG NICOLSON.

It’s often unnoticed, but Sapa is a part of daily life. Looking at three newspapers, there were 18 Sapa pieces in Thursday’s Citizen, some were just notes on the side of the page, but many featured prominently. The Star had 13 articles from Sapa, weighted towards sports and briefs, some originating came from Associated Press. Sowetan was Sapa-free.

The South African wire agency’s demise officially began when Times Media Group (TMG), which owns Sowetan, The Times, Business Day, Daily Dispatch, EP Herald and Sunday Times, who along with Caxton, Independent, and Media24, were shareholders of the non-profit agency, decided in 2013 to resign from the group and stop printing its copy in its newspapers. Agence France-Presse ended its partnership with Sapa in 2014. Shareholder Caxton followed and Independent gave notice it was also resigning, putting an end to a funding model, albeit changing under different ownerships, that had supported the agency, set up to provide independent copy to rival Reuters in 1938.

“It is with great regret that we must inform you Sapa’s board of directors have this morning formally announced the Association will cease all operations on March 31, 2015,” wrote Sapa editor Mark van der Velden in a letter on Thursday. “It is a sad but unavoidable decision for the member newspaper groups of the news agency, which have had to confront the fact that the current non-profit business model cannot be sustained any longer.”

When TMG withdrew, its managing director of media operations Mike Robertson said Sapa was too expensive and it wasn’t happy with the “quality of the service”, leading TMG’s newspapers to rely on it less.

That, however, didn’t reduce the wire agency’s prominence. TMG publications still published Sapa online. In fact, many media houses rely on the agency for their online content while reserving what’s written by their own journalists for the newspapers. At the time of writing, influential online news sites like TimesLive, SowetanLive, IOL, and News24 featured Sapa pieces in their top articles. The agency’s influence is hard to underestimate, providing online platforms with fast copy and a clear angle and filling newspapers where constrained resources and slow news days fail to provide content.

The National Press Club mourned the announcement on Thursday. According to an article on TimesLive, (written by Sapa, of course) chairman Jos Charle said, “For many decades Sapa has been a trusted partner in the media industry, generating and providing news content and tips used by most media houses.” He continued: “At this stage it is unclear how its closing will affect the industry… We urge the liquidators to look after the interests of staff members – many of them highly experienced journalists – as far as possible.”

It would be remiss, however, to mourn Sapa without acknowledging its challenges, perhaps brought about by the digital revolution, casting the agency into a role it was never designed to play. In 2010, Mandy de Waal described in Daily Maverick how a Sapa story, based on a Beeld report, said Julius Malema would not run again for ANC Youth League president (he did) and the story spread, everywhere.

“With ever tighter resources, stressed-out copy tasters and news editors and night editors trying to meet deadlines, if there happens to be a Sapa story sitting on the wires, waiting to be cut and pasted, slotted in, that’s what happens,” Van der Velden said at the time. “It is a cop out to blame news agencies for the bland reproduction of wire agency copy. Editors are often very dishonest with themselves and quick to malign the type of journalism news agencies do. But that kind of basic information is the vital platform of raw information that a lot of other media need. The media should take it as the beginning point for their own more detailed, more qualified, more in-depth reporting.”

Agencies like Sapa were designed to provide immediate information for newspapers to build on but in recent years, with a lack of finances due to lower advertising revenue, cutbacks in staff, and decreasing circulation, plus the added pressure of providing more content on online platforms, wire reports became a content filler. “You can see when a newspaper has a really energetic day, they will do their own copy, crack their own stories, have a really good day and use very little Sapa. Maybe a couple of days down the line they have a lot of people sick, tired or dispirited because they’ve been told they are not getting a raise, and they have what I call very crudely an ‘Ag fuck it, let’s take Sapa day’. You can see it,” continued Van der Velden.

Much of the media relies so heavily on the agency, it’s almost unfathomable to think the “Ag fuck it, let’s take a Sapa days” are almost over. It’s hard to imagine not only a time without Sapa’s snippets that, often unrecognised, defines much of our discourse, for good or bad, but how publications that rely heavily on the source will survive without it, particularly online.

There has been interest, however, in continuing the service. In a statement last September announcing Caxton’s return as a shareholder, Sapa mentioned plans to become a commercial entity. There was interest from photography and video agency Gallo Images, linked to Media24, Sekunjalo Investment Holdings, which under Iqbal Surve took over Independent in 2013 and has raised issues of media independence, and Moeletsi Mbeki’s KMM Review Publishing.

Because of its particular non-profit status Sapa can’t be sold off, but Nkonki Incorporated has been appointed to close the agency and will handle bids for Sapa’s assets. “There are indications that a number of interested parties are independently considering the establishment of a new, fully commercialised successor news agency operation which would in effect take over where Sapa steps down. However, that is a separate matter, although these parties may soon contact you directly,” wrote Van der Velden to subscribers on Thursday.

A new agency might emerge, but it won’t be Sapa. If there’s a replacement, it will need to build a newsroom from the ashes and customers from scratch. It will need to be commercially viable, a first for a news agency in this country. And news publications will have to figure out how to fill a content gap which for many came at an entitled low cost. In the meantime, titles under organisations like TMG that already phased out Sapa in its papers will need to put more original content online. Expect the others to replace Sapa stories with foreign wire and syndication pieces. DM