By African Network of Centres for Investigative Journalism• 5 February 2015 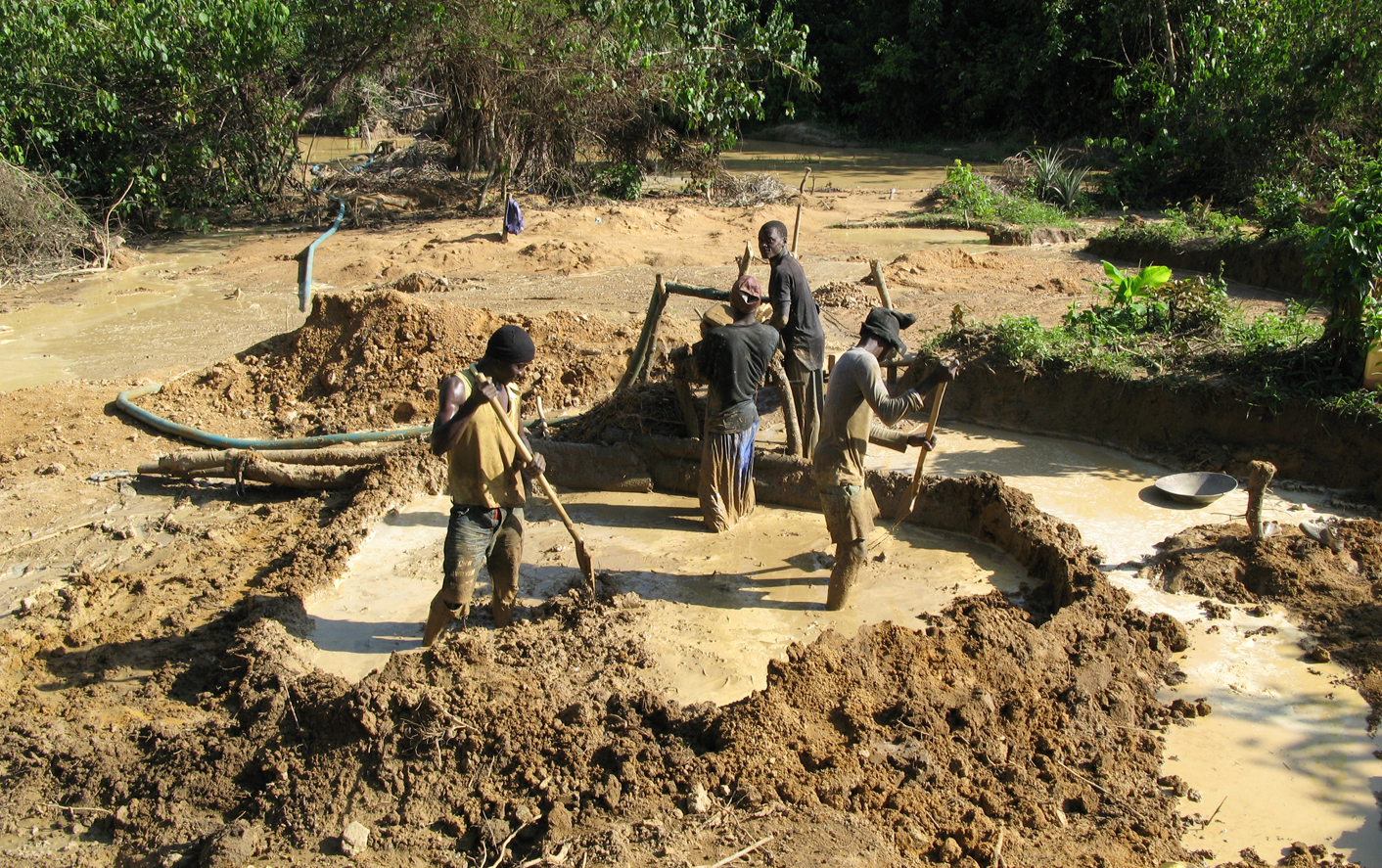 With not much else to do, thousands of disaffected young men in the border region between Liberia and Cote D’Ivoire have turned to illegal gold mining – a dangerous, draining profession with scant reward and potentially devastating consequences. A special report from Liberia by the AFRICAN NETWORK OF CENTRES OF INVESTIGATIVE JOURNALISM.

A recent report by the United Nations Panel of Experts in Liberia highlighted the ongoing insecurity in the border area between Liberia and Côte d’Ivoire, and the risk of an upsurge in violence there as the Ebola epidemic abates and campaigning for this year’s Ivorian presidential elections intensifies.

Underpinning this insecurity is the large number of disaffected young men working for a pittance in dozens of gold-mining camps along both sides of the frontier. Much of the mining is unlicensed and illegal, and the governments in Monrovia and Abidjan have little idea of how much gold is produced, who buys it, or where it ends up.

I wanted answers to these questions, so in December 2013 I travelled to a remote, forested area in the far south-east of Liberia, located in Grand Gedeh County and extending over the Cavalla River into the Tai Forest of western Côte d’Ivoire. My purpose was to assess the potential for low-level cross-border conflict, population displacement and illegal gold mining once again to destabilise this remote part of West Africa and place a new burden on the already chronically overstretched peacekeeping capacity of the international community.

It is less than 400km from Monrovia to Zwedru, the administrative capital of Grand Gedeh County, but the journey can take weeks. The appalling roads, often hemmed in by thick forest, become sclerotic as soon as the first poda poda minibus capsizes in the mud. In a brand-new Land Cruiser we averaged 80km every 18 hours. Another new Land Cruiser travelling with us was abandoned after the clutch and the gearbox burned out while attempting to pass jack-knifed, semi-submerged trucks at bottlenecks along the route.

Zwedru is a small, unremarkable town deep in the bush. Its principal trade is the traffic in gold and diamonds extracted by the alluvial mining industry, which goes on throughout the south-eastern region.

About 40,000 refugees live in camps and communities along the border with Côte d’Ivoire, which they fled during the political crisis of 2010. The vast majority are from the Guere ethnic group that inhabited the forests of western Côte d’Ivoire for centuries, and over the past 150 years traded cocoa with Europe and the United States.

After the civil conflict that saw Laurent Gbagbo ousted from power, Allasane Ouattara and his Muslim northern supporters streamed into the south of the country, displacing the Guere from their farms and forcing them over the border into Liberia, where their ethnic cousins, the Krahn, gave them sanctuary.

Initially these refugees were housed in three camps set up by the UN High Commission for Refugees – PTP, Duogee and Solo – in Grand Gedeh County, not far from the border.

It was a decision that had serious ramifications for cross-border security. Overcrowding, hardship and lack of opportunity drove many young men deep into the bush, where they began to eke out a living digging gold and low-grade diamonds for Liberian licence-holders.

The camps grew in number and size, and by 2011 some of them, including the Bentley and Barteljam camps, were home to as many as 7,000 people. They had their own markets, schools, bars and cinemas, but no sanitation or healthcare.

It was in Barteljam, a sprawling, overcrowded, rural slum, that I met Roosevelt Nyantee, also known as Alpha Golf, a former fighter with Model, the Liberian militia that helped oust former president Charles Taylor in 2003.

Although only 30 years old, he looked much older, his features ravaged by war and years spent in the bush fighting hunger and disease. “After the war ended in 2003 we were given small money by the UN to lay down our weapons,” he told me. “We were promised retraining as mechanics or tailors, but few of us received this training. So I came to Zwedru to look for work as a gold miner.

“This is where I met my boss man, a Krahn brother called Saesu, who had been a commander in Model. He offered me work digging in the deep pits here at Barteljam.

“Working in the deep pits is much harder work than working in the open pits, but it pays better because you need strength and courage. It is very dangerous work and many of my friends have died in cave-ins.”

Nyantee took me to the deep pit where he works up to 16 hours a day. The site is located on the side of a hill, about two miles north of the main mining camp. Like a vast rabbit warren, the area is pock-marked with holes, covered with tarpaulins, and interspersed with rudimentary shacks where exhausted miners sleep, cook bush meat and rice, and drink and smoke marijuana.

At first sight the pits appear small, perhaps only 1.5m in diameter. But on closer inspection one realises how deep they are – sometimes up to 60m straight down. The miners shin up and down with their feet and backs braced against opposite sides of the shaft walls. There are no safety ropes or helmets, and a slip in wet weather means either death or serious injury miles from medical care.

Nyantee told me: “Once we find gold at the bottom of the pits we start to dig out horizontally, kicking the dirt back before filling buckets which are then hauled to the top by other members of the gang. This is when it gets really dangerous – you can expect a cave-in at any time. We all say it is more scary than fighting. In war you get shot and die; here you get buried alive.”

After the ore is washed at a creek on the surface, a day’s production is small, often less than a gram of gold dust, and the proceeds must be shared among all the members of the gang. Some days yield nothing at all.

Back at Barteljam camp, Nyantee introduced me to his broker, Ibrahim Yallah, a Muslim Mandingo from the Forestière region of south-eastern Guinea. Tall and thin, Yallah wore a long, grubby kaftan and a crocheted prayer cap.

In broken French he explained how he made monthly cyclical tours of the mining areas, visiting about ten sites in Guinea, Liberia and Côte d’Ivoire. “I travel by bush taxi and visit certain mines where I am known and know miners. It is long and hard, especially during the rains. The food is poor and we always have malaria or diarrhoea, but you get used to it.

“You have to be careful. We carry gold, diamonds and money, and this has to be hidden in other merchandise like palm oil barrels or cloth. If you don’t hide it, soldiers, police or thieves will take it. That is why it is always best to look poor.

“Sometimes we borrow money from friends who have shops in the mining areas; we can even bring them rice or fuel in return. Mandingos can do this because we trust one another.”

I asked Yallah where he sells the gold to the larger dealers. “I have clients in Zwedru and Nzerekore. These are big men with capital. They buy a lot of gold from people like me every week. Most are from my Mandingo tribe. When they have a lot of gold they sell it on to the exporters.”

I asked him where the exporters are based. “Some are in Conakry and some in Bamako. They are often connected to smelters where the gold gets refined into bars before it leaves on aeroplanes for the Middle East.”

In Zwedru, via contacts, I tracked down a major dealer called Mustapha. Although cagey at first, he opened up over cigarettes and mint tea after we had discussed mutual friends. “Some of us are moving up to four kilos a month via Conakry or Bamako. Once the network is established and the relevant people are on side, it is not a problem to move these amounts. All you need is the flow of gold, the flow of capital, and trustworthy couriers who can make the journeys to the big West African cities or even to Dubai.

“I have been to Dubai many times. I can even travel business class and take the gold with me as cabin luggage. They never ask questions in Dubai. From the airport I travel to certain cheap hotels that African traders use to meet my buyers.”

I asked him who his buyers were. “Usually Arabs, but also we see Persians and even people from Khartoum.”

The government in Monrovia is powerless to do anything about the industry and its associated trade. Said a Liberian mines ministry official: “Quite simply, we lack the necessary resources and capacity to intervene. There was a belief within the authorities that at least it kept young men busy. This did not last for long, as low-level cross-border attacks into western Côte d’Ivoire by Guere, supported by Krahn mercenaries, grew in number and frequency. As casualties mounted the UN, in particular, began to have grave concerns about the wisdom of locating the refugee camps so close to the border.

“Although surveillance and monitoring were stepped up, it was not enough to prevent the killing of seven UN peacekeepers in May 2011 on patrol from Toulepleu. The industry is too big, too uncontrolled – we can’t do anything about it.”

While it has not been clearly demonstrated that gold from the mines along the border helps pay for weapons – money for this purpose is more likely to come from Guere expatriates in Ghana and France – the mining areas provide remote camps for young men where they can sustain themselves and be recruited by commanders for fighting, when required.

Some of these cadres have been captured or killed. But new combatants, bitter at their loss of land, are emerging, and attempts by the Ivorian government to pay known fighters not to join raids has proved largely unsustainable.

Without an effective process of reconciliation and equitable land reform in Côte d’Ivoire, endemic, low-level conflict is likely to continue for the foreseeable future, destabilising the border region and putting pressure on the international agencies that support refugees.

Global demand for gold, and the lawlessness of gold mining in West Africa, will continue to play a role in perpetuating an intractable problem. DM

The author of this report has requested that his name, which is known to the editors of the Daily Maverick, not be released. Work on this report was funded by Open Society West Africa (OSIWA) and produced by African Network of Centres for Investigative Reporting (ANCIR). All photos by ANCIR.