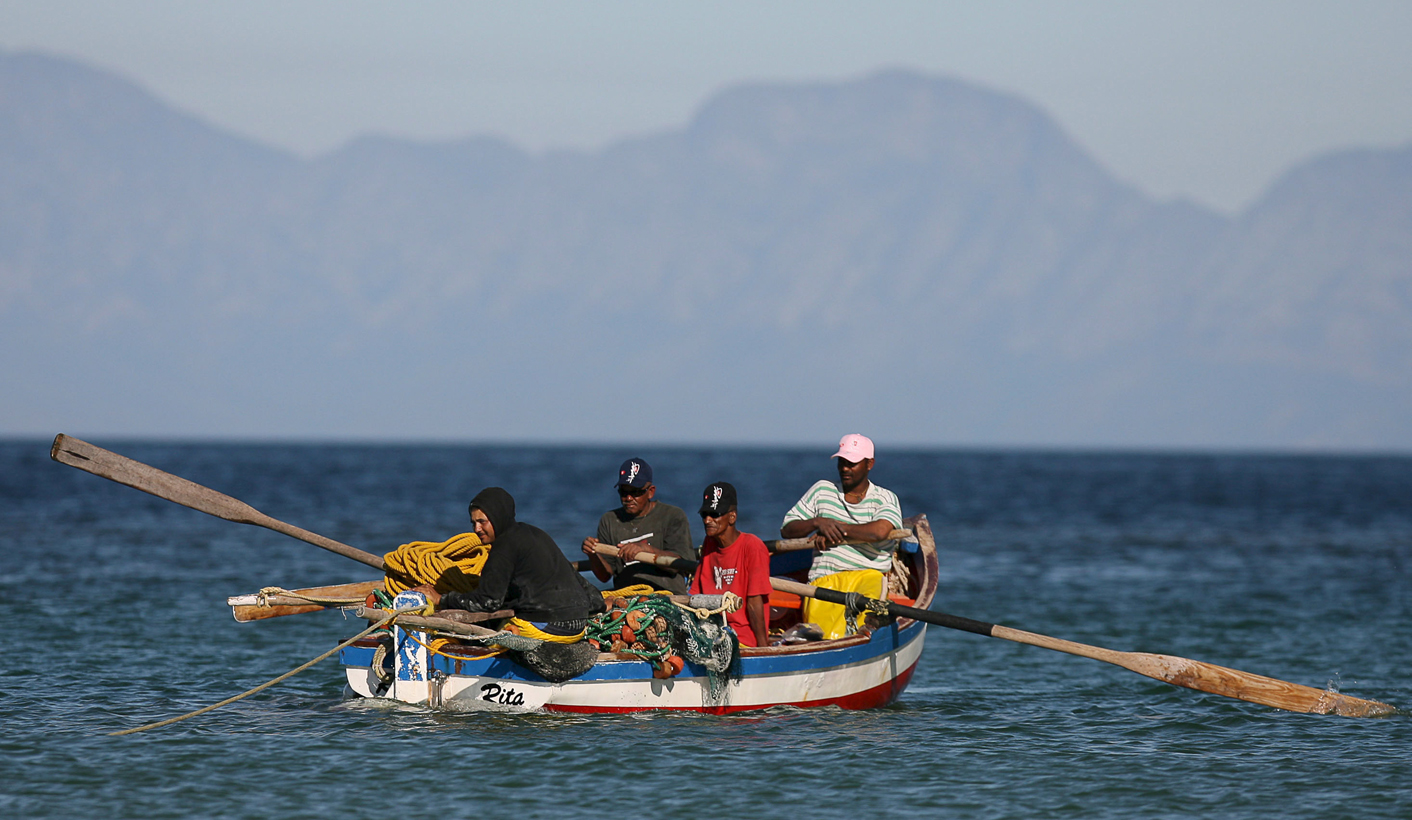 The oldest profession before the oldest profession was, of course, subsistence and small-scale fishing. South African small-scale and artisanal fishers have fought long and hard for their rights and while well-intentioned policy exists, it is yet to be properly implemented. Meanwhile, fishers charge that interim relief measures are being mismanaged, are riddled with corruption and have fractured fishing communities. Fishers have now vowed to turn 2015 into a year of action. By MARIANNE THAMM.

In December last year, Coastal Links, a small-scale fisher movement representing around 4,000 community and artisanal fishers in about 100 towns in the country, delivered a stinging memorandum to the new Minister of Agriculture, Forestry and Fisheries, Senzeni Zokwana, as well as the Deputy Director General (DDG) of the Department, Mortimer Manye.

Christian Adams, chairman of Coastal Links, informed the minister in no uncertain terms that the ongoing mismanagement of the Interim Relief (IR) system – implemented by Department of Agriculture Forestry and Fisheries (DAFF) in 2007 after small scale fishers won a landmark Equality Court ruling that new policy be developed to include this sector – had resulted in “much suffering in small-scale fishing communities across the Western and Northern Cape”.

“We have persistently brought areas of corruption and mismanagement in the allocation process to the attention of DAFF officials but nothing gets done about these,” Adams charged.

The Interim Relief Permit system originally intended to provide temporary succour to small-scale fishers who did not benefit from Long Term Rights in policies developed by government in 2005. The new legislation galvanised fishing communities who, in 2007, through the NGO Masifundise, took the matter to the Equality Court.

That court delivered a landmark ruling that new policy had to be developed to include these small-scale and artisanal fishers. The original intention was that the IR system would only apply for two years while new policy was being drafted. But nine years later the system has been described as “dysfunctional, irregular and inefficient”.

Government’s Small-Scale Fisheries (SSF) policy was adopted after a lengthy process in 2012 and the 1998 Marine Living Resources Act was finally only amended and signed off in May 2014.

It recognises, for the first time in the country’s history, the rights of small-scale fishers to access food and nutrition from fishing activities as well as aiming to enhance the role of women in managing marine resources, marketing, tourism and aquaculture. Small-scale fishers now, by law, have preferential access to particular marine resources.

But the new law is yet to be implemented and fishers are fed up. They have declared 2015 as “the year of small-scale fishers” and have threatened legal action to compel the department to implement the Small-Scale Fisheries Policy “with no further delays.”

“We have held back since the SFF policy was adopted last year, hoping for rapid implementation but we see no sign of urgency, no resolve from the centres of power,” said an editorial in The Hook, Masifundise’s weekly information newsletter.

In the memorandum to the minister Adams charged that the DAFF was removing bona fide fishers from lists, had continued to issue late permits depriving fishers of their ability to pursue their livelihood and in fact criminalising them. Over and above this, beneficiary lists were often manipulated to benefit non-fishers including “professionals, business people and a range of others already in employment elsewhere”.

“This not only deprives traditional fishers of their rights to earn a living but causes significant conflict in communities. It is clear that DAFF officials lack knowledge of the IR system and are unable to respond to the needs of small-scale fishing communities. Others are simply unresponsive, not replying to correspondence or requests for meetings. They even disregard valid information submitted to the department,” said Adams.

Adams said the Department also did not keep records of catches, which resulted in allocations based on inadequate information, and that DAFF hardly ever followed up after discussions and meetings with communities.

“So you have a situation, in some cases, where in a fishing family, one member gets a permit and another doesn’t. Then there are people who are not fishers who get permits and people see this. This has caused tremendous conflict and has divided communities,” Adams told Daily Maverick.

The Small Scale Fisheries department had indicated to Coastal Links that it had a plan, said Adams, but this has not yet been forwarded so that it can be discussed and interrogated by stakeholders.

Meanwhile, the DDG has requested a meeting with Coastal Links next Tuesday but the agenda is not yet known. Daily Maverick did ask the Department to respond to the issues set out in the memorandum but at the time of writing had not received a reply.

There have been heated exchanges between representatives of community fishers and some DAFF officials who have been fingered for manipulating the permit system. Last year the Hawks investigated the former acting head of fisheries, Desmond Stevens, after allegations that he had demanded money from fishers in return for allocating permits.

(Stevens was exonerated by the Harris Nupen, Molebatsi report and was cleared of wrongdoing in with regard to Frap2013.)

The new minster, Senzeni Zokwana, was appointed in May last year and inherited a ministry left in chaos by his predecessor Tina-Joemat Pettersson. Zokwana has been given the unenviable task of starting a review application setting aside the 2013 Fishing Rights Allocation process known as FRAP2013 after an audit report found severe shortcomings in the process. Over and above this he will have to oversee the implementation of the Small Scale Fisheries Policy that has now become urgent.

There are fishing communities in South Africa who can trace their roots back to over 100,000 years, but in the 21st Century seafood, according to the World Wildlife Fund, is the most traded primary commodity in the world.

Globally small-scale and artisanal fishers face huge pressure from large-scale industrial and commercial fishing corporations who have been able to influence laws and policy. The formalisation of the small-scale fishing sector will most certainly impact on commercial fishing rights with these fishing companies compelled to either work with community fishers or at least surrender sections of their fishing grounds.

Mandla Gqamlana, Masifundise programme co-ordinator, said the organisation had attempted to engage with the Department at various levels “but over the past 12 months there has been a deliberate and conscious effect to push us away from the negotiation table”.

While it was clear that there was the political will in government, said Gqamlana, it appeared as if those officials tasked with driving the process were now acting as gatekeepers.

Gqamlana said that the rifts and fissures, particularly in the ANC in the Western Cape, were exacerbating matters.

“We cannot run away from the fact that there are factions and we know the ANC is fighting in this province and if getting those votes entails giving permits to people who are not deserving, they will do that. So, there are also these dynamics that we do not have control over. We should be aware of and they play a role,” he said.

South Africa, says the WWF, faces a deepening crisis, as there has been a collapse or a heavy depletion of inshore marine resources. Competition under these circumstances can be deadly, especially when it comes to delicacies like the sought-after West Coast Rock Lobster.

According to a Department of Agriculture, Forestry and Fisheries 2010 GDP report there are around 147 fishing communities, 28,338 fisher households and about 29,233 people who are considered “true” subsistence fishers, although Coast Links say the figure is around 40,000. Only around 2,000 of these benefit from IR.

The 2011 WWF “Fisheries: Facts and Trends” survey revealed that in 2009 fish worth R4.4 billion were landed in South Africa, the equivalent of 583,000 tonnes of fish. Revenue from commercial fisheries exports were an estimated R3.1 billion contributing to 0.5 percent of the country’s GDP. Fishing in the Western Cape contributes 0.2 percent of the Gross Geographic Profit while in the Eastern Cape squid fishing generates R500 million in foreign revenue per year, making it one of the country’s most valuable fisheries. South Africa’s commercial fishing industry employs approximately 43,458 people, including seasonal and permanent employment.

Until 1994 South Africa’s fishing industry was white-controlled and owned. While the 1998 Marine Living Resources Act (MLRA) declares that South Africa’s natural living marine resources and environment “belong to all the people of South Africa”, the country’s oceans have become contested territory. Subsequent legislation has aimed to transform this sector and to restore rights particularly to fishing communities dotted along South Africa’s coastlines and who are more than aware of sustainable fishing practices.

The South African coastline is divided in to five “basket areas” from the Namibian border to the Cape of Good Hope from here to Cape Infanta, from Cape Infanta to Tsitsikamma, from Tsitsikamma to Pondoland and from Pondoland to the Mozambican border.

Fishers who are eligible to become members of a CBLE must be South African, over 18, have a history of harvesting marine living resources personally, be able to show a direct historical involvement in the small-scale fisheries sector for at least 10 years, show a historical dependence on marine living resources, have no other employment and subsist from their catch. The new Small-Scale policy proposes that preferential areas near-shore are prioritized and demarcated as small-scale fishing areas and is some areas rights could be exclusively reserved for small-scale use.

Coastal Links members are not going to go away quietly and are currently planning a series of local protests to highlight their frustrations.

The irony, said Gqamlana, is that while small-scale fishers were struggling to get policy implemented “the commercial sector, which has always benefitted from the system, even in the previous dispensation, continues to benefit. They are not plagued by these difficulties. The people who should be benefitting from this current dispensation are not. And that is the irony. I hope that some people with a conscience will, 20 years down the line, do some serious introspection.” DM