Proteas depart for the World Cup with stomachs in, chests out 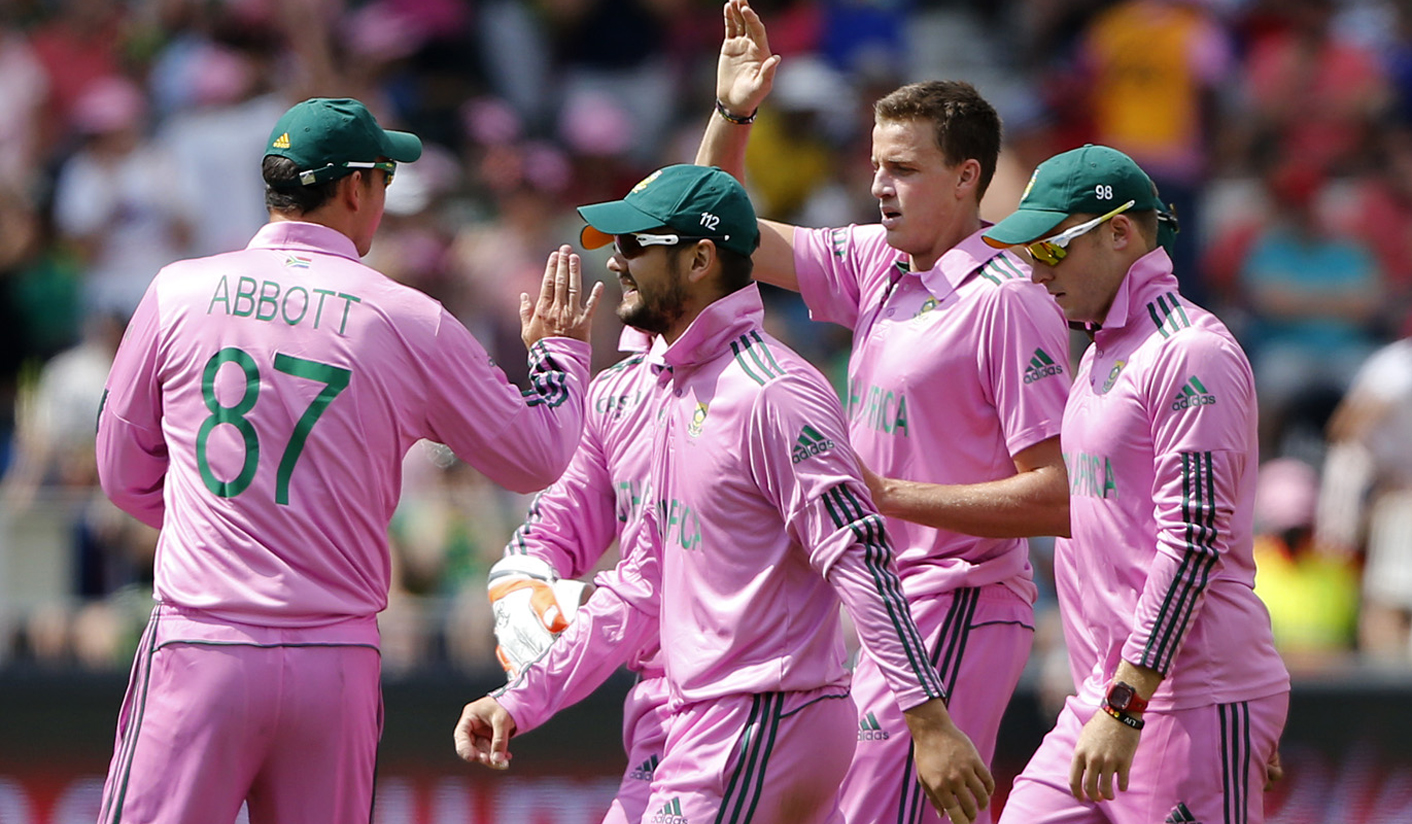 South Africa depart for the 2015 Cricket World Cup full of confidence, and rightly so. The six-week jamboree in Oceania is a long and drawn out affair, but meticulous planning, self-belief and a little bit of crafty marketing has left them in a much stronger position than in previous tournaments. By ANTOINETTE MULLER.

If you live in Johannesburg and you haven’t got much going on tomorrow, you might want to get down Melrose Arch for a bit of fanfare as the South African cricket team is bid us farewell before they embark on their World Cup adventures. Sports minister Fikile Mbalula must be doing cartwheels at such a prime opportunity for publicity.

It’s still 10 days before tournament actually kicks off. From there, it’s a four-and-a-half-week long process before the knockout matches. If dedicated fans (and hardened reporters) manage to survive the sleep deprivation that comes with watching cricket in Oceania, the next rounds will be a breeze as Stockholm Syndrome sets in.

As far as grouping goes, South Africa definitely got the ‘easier’ route to qualifications. They face an Indian team who has seemingly forgotten how to win at home, a comically unpredictable Pakistan, a West Indies side they’ve already trounced as well as Ireland, Zimbabwe and the United Arab Emirates.

It’s no wonder the South Africans are heading into the tournament brimming with confidence. They are fresh off a convincing series win over the West Indies and in the last eight months, they have had wins in Sri Lanka, a win over the Aussies in a tri-series final and a series win in New Zealand to show for their meticulous planning. Add to that the other-worldly batting of Hashim Amla and AB de Villiers, a snarling Dale Steyn and a ferocious Vernon Philander and you can see why the Proteas are prancing around with their stomachs in and chests out.

“We are more confident than India and Sri Lanka at the moment – Sri Lanka have lost a series to New Zealand and India haven’t won a game in Australia for three months,” said coach Russell Domingo.

“New Zealand and Australia’s confidence levels are obviously up and they are playing in conditions they are used to, but so are we. We beat New Zealand in New Zealand, so we know we can do that and we ran Australia close in all the games. There is not much to choose between those three sides.”

Confident they might be on current form, but that does not mean that they are without worry. Bowling at the death remains a massive concern. The attack has routinely conceded 60 to 80 runs in final five overs and not just in crunch matches. In the build-up to the tournament, they have been drilled by De Villiers, Allan Donald, Gary Kirsten and Charl Langeveldt.

The brains trust say that their reluctance to bowl yorkers is because they want the attack to be “unpredictable”, but the problem is that not hitting the blockhole is predictable in itself.

Steyn, Philander and Morne Morkel can only do so much to strike up front and it will be the back-up bowlers who really need to come to the party. In Imran Tahir, South Africa have a wily spinner who is in complete contrast to the player he is in Test matches. Then there is JP Duminy, who is more than able with the ball, but it’s the fifth bowler spot that generates the most raised eyebrows.

Currently, that role will be filled by Farhaan Behardien. It’s an odd disposition since 31 wickets in 86 first-class games and 32 in 135 in List-A matches doesn’t exactly scream ‘all-rounder’ credentials, but he seems to have turned into something of a golden arm in recent months. It’s just as well as since his batting remains unconvincing and the absence of an all-rounder – in the form of either Ryan McLaren or even David Wiese – continues to baffle.

McLaren had a torrid time during his last trip Down Under, but his experience will be missed. Somebody who could fill in for McLaren in place of Behardien is Wayne Parnell. He’s a better bowler than Behardien and while he’s not exactly going to set the world alight with his batting ability, he has opened before and has two list A hundreds to his name. But Parnell is not without factory faults. He is inconsistent, but as a left-arm option who can be deadly when he finds swing, as he showed when he took four for 42 against the Windies in Centurion, he could very well wangle his way into the starting XI.

With the nagging nitty gritty team details likely to be ironed out on a ‘horses for courses’ basis, South Africa can focus on the bigger picture. Surprisingly, they have opted not to take a psychologist on tour. Whether that means they are in denial about their mental issues in knockout matches or simply trying to move on without too much fuss is not clear. But they are drawing on a different kind of mental charge.

Cricket South Africa have spent the last few months fuelling a very believable and emotionally charged Protea Fire campaign where De Villiers and all the rest keep on telling the country that they are playing “for you”. The marketing brains behind the campaign must be thanking their lucky stars that South Africa’s players come across so sincerely.

The campaign recently culminated with Amla, De Villiers and Steyn surprising a kid in his home. The youngster told Steyn how to bowl properly and then Philander and Faf du Plessis joined in a game of street cricket where somebody tried to bounce Amla. (Watch)

Cricketers aren’t actors, except maybe for Du Plessis, which is why the video is so completely captivating and will leave even the most concrete-hearted feeling as if though the room might be getting a little bit dusty. Sure, it’s marketing and the campaign has its flaws, but if South Africa are looking to draw inspiration and a mental recharge from a collective “12th man”, they’ve most certainly got it. It won’t be until their expected quarterfinal where the strength of their marketing will really be tested, though, and luckily for South Africa, there’s still plenty of time before that particular albatross makes a landing. DM

Photo: South African players celebrate the dismissal of West Indies’ Chris Gayle (R) after he was caught out by Farhaan Behardien during the second One-Day International (ODI) at the Wanderers stadium in Johannesburg January 18, 2015. REUTERS/Siphiwe Sibeko