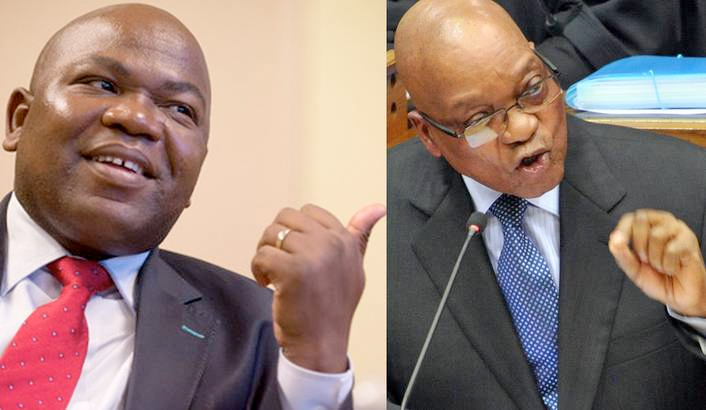 We have all become so accustomed to fights around control of our justice system, the intelligence services and the police, that sometimes big announcements pass almost without notice. On Saturday afternoon, the Presidency announced that it would continue with the inquiry into the fitness for office of the National Director of Public Prosecutions, Mxolisi Nxasana, six months after the first announcement was made. No matter what happens from here on in, it seems impossible to believe that the National Prosecuting Authority is not going to be even weaker, at the end of this process, than it is now. If that is indeed possible. By STEPHEN GROOTES.

It was on Saturday 5 July last year that President Jacob Zuma first announced he was going to launch this inquiry. At the time, there was a certain context. It had emerged that Nxasana had not properly disclosed his legal history when a routine security background check was conducted. In particular, he’d forgotten that once upon a time, as a young man, he’d been accused of murder. (He had been acquitted, after citing self-defence.) There were other claims too, but the upshot was that it was incredibly clear that Zuma, and the people around him, had not done their homework. This must have been the case, because otherwise Zuma surely would not have instituted this inquiry in the first place, as he would have known the facts of the matter already. Considering that the Constitutional Court struck down his first choice, Menzi Simelane, partly because Zuma had “not applied his mind”, to lose two NDPPs would certainly look very careless.

Then there was a long period of what you could call “phony lawfare”. Nxasana went off to court, asking for the inquiry to be declared null and void. That seemed to end with a delay, and a situation where Nxasana could bring it back should he wish to. At the same time, there were a series of meetings between the two. It is an almost forgotten fact that moment before Julius Malema and his gum-booted cohorts started chanting “Pay Back the Money”, Zuma had told the National Assembly about these meetings.

The fact that there were meetings in the first place would suggest that there was a search for common ground, that it could not be found, and that Zuma would be going ahead with his inquiry. According to the two-sentence statement, he wants this to happen “expeditiously in order to resolve such a matter which is no doubt of paramount public interest.”

It would appear that the president’s definition of the word “expeditiously” and the way most people define that word could be slightly incongruous. Certainly, “expeditiously” doesn’t usually mean “six months”, which is what it’s taken to get us to this point. In other words, it’s taken six months just to decide on a decision we’d already decided upon.

The future of this process is relatively easy to forecast. At some point, in the hopefully not-too-distant future, a statement will come from Mac Maharaj announcing who will chair the inquiry. Then, after a month or so, the inquiry will begin. It should, and surely will be, in public and will probably involve some testimony from various parties. Someone will act as an evidence leader, Nxasana himself will have lawyered up by then, and an argument will be presented on his own behalf. Then the chair will go away and come back with a recommendation, which the president will then examine, before making a final decision. Along the way, there will be claims and counter-claims, threats of court action, delays, court actions, adjournments, denials and court action. (And, of course, something so completely unexpected that is impossible to predict now.)

Bluntly, given the past experience of these things, the way our system works nowadays, and the fact that it is possibly not in Zuma’s interests, or perhaps even Nxasana’s, to get a move on, we could be without a proper NDPP in place for the better part of a year. And possibly longer.

Which is worrying (and potentially disturbing), because in the meantime a series of big decisions have to be made.

Firstly, the process of prosecuting Richard Mdluli must continue. He already faces charges (after the Supreme Court of Appeal ruled that they be reinstated) but it’s going to be a long and complex case, and whoever prosecutes it would probably want firm guidance from Nxasana.

While the inquiry conducts its business, the real fight for the soul of the NPA could actually be conducted elsewhere. It appears, certainly from the outside of the NPA, that there has been a running fight for turf of sorts between Nxasana and one of his deputies (there are actually four deputy NDPP’s) advocate Nomgcobo Jiba, and the head of the NPA’s Commercial Crimes Unit Advocate Lawrence Mrwebi. Jiba and Mrwebi are currently facing court charges of their own, instituted by Nxasana, for their role in withdrawing the original charges against Mdluli. To make matters more interesting, as has been noted many times before, Jiba’s husband, Booker Nhantsi, had his criminal record expunged, after Zuma gave him a presidential pardon.

And while all of that is going on, the DA will be pursuing its application to force the NPA to reinstate the original corruption charges against Zuma, that were withdrawn just before the 2009 elections, paving the way for his ascension to presidency. That decision was taken by an acting head (Mokotedi Mpshe), somehow there would be a certain justice if they were reinstated by another acting head (whoever that might be).

It is at this point, in a piece about the NPA, that it is traditional to turn to Zuma’s role in all of this.

Certainly, he has to take the lion’s share of the credit for making this mess. He appointed Nxasana, he decided to launch the inquiry into him. To go further back, none of this would be happening if he hadn’t tried to have Simelane foisted on the NPA in the first place, after the last inquiry in to an NDPP hadn’t found that he had “prima facie” lied under oath.

However, there does seem to also be a much bigger dynamic playing out. While Zuma may indeed be one of the big kings of the chess board that is the struggle for control over our intelligence services, legal system and police, there are plenty of other actors. It was Kgalema Motlanthe who actually decided to fire Vusi Pikoli, and it was Mbeki who perhaps strangled the NPA at birth, with his appointment of Bulelani Ngcuka as its first head.

As the analyst Professor Steven Friedman suggested last week, the real issue is that there is a closeness between our political leaders and the heads of these organisations because of our history, and particularly the Struggle. So Mbeki and Motlanthe weren’t just dealing with neutral appointees when they defended Selebi or suspended and then fired Pikoli, they were dealing with people they’d already had a long history with.

This can make it quite difficult to work out cause and effect. However, this also seems to make it quite hard to understand Zuma’s appointment of Nxasana in the first place. He has never bothered to tell us why this particular attorney was chosen. And there doesn’t seem to be much of a struggle history to Nxasana that we are currently aware of.

For the moment then, one logical conclusion would simply be that Zuma made a poor choice, is regretting it now, and feels that another period of uncertainty for the NPA suits him anyway. Until other explanations are forthcoming, it would appear difficult to come to another conclusion. DM