The fight to save SA’s rhinos: What the Minister didn’t say 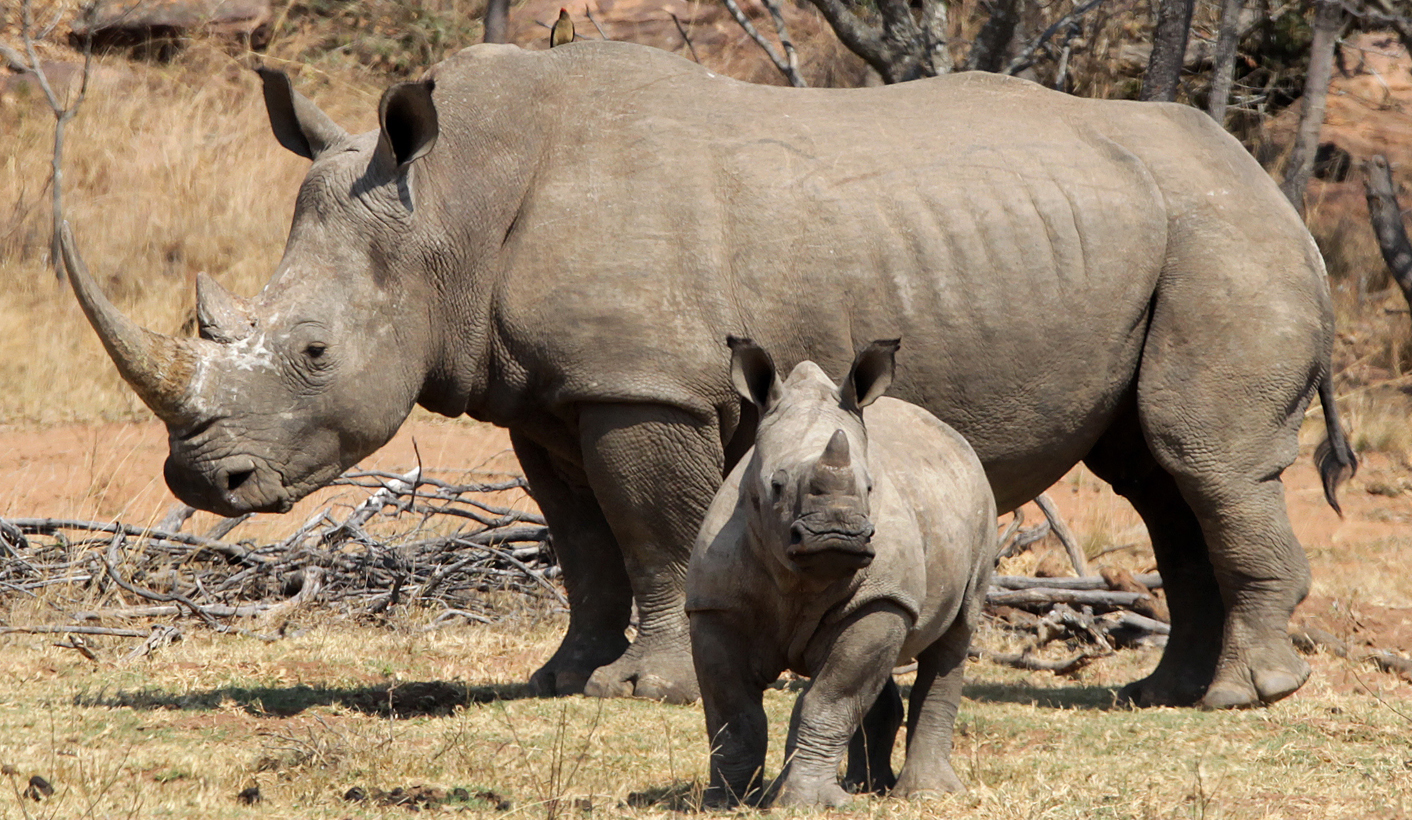 When listening to Minister of Environmental Affairs Edna Molewa discuss tackling the scourge of rhino poaching, one hears lots of ‘good’ news – but sadly there is little of real substance on the key issues when one delves a little deeper. The number of rhinos poached last year has once again reached a new record, with a staggering 1,215 rhinos officially slaughtered in 2014 – a 21% increase since the previous year. Yet what comes through in her press meetings is a mostly a positive story: South Africa is, apparently, making every possible effort to stem the bloodshed. By ANDREA TEAGLE.

Some of the interventions outlined by the Minister are indeed positive, notably the translocation of 54 rhinos in the last quarter of 2014 from the Kruger Park to undisclosed ‘Intensive Protection Zones’, and the translocation of 100 rhinos to SADC countries. One of the most important moves is close collaboration with neighbouring states (particularly Mozambique) which serve as major entry and exit points for illegal rhino horn.

However, as many of the poachers come from Mozambique and most of the poached rhino horn is still exiting South Africa illegally the same way, the cited memorandum of understanding (MOU) with Mozambique is ineffectual until an Implementation Agreement has been signed and acted upon.

Although these interventions all sound good, many are not translating into decisive action. That is the problem. With each day that passes, another three to four rhinos on average are killed illegally.

South Africa’s ‘integrated strategy’ recognises the necessity of combating poaching on a number of fronts; yet a few fatal flaws are it all it takes to see our wall of defence crumble in the face of rising Asian demand for our rhino horn. One of the greatest criticisms against South Africa’s anti-poaching efforts has been of the low rate of arrests of middlemen and syndicate leaders, as well as lenient sentences often handed out to poachers.

In her press briefing last week, Molewa chose not to draw attention to these shortfalls. Instead, she pointed out that the number of arrests increased from 343 in 2013 to 386 in 2014, and that the conviction rate, at 61%, had also improved.

This sounds impressive. However, the conviction rate, according to the NPA, refers to the “percentage of cases finalised with a guilty verdict divided by the number of cases finalised with a verdict”. This is a misleading statistic. It tells us nothing about how the number of successful prosecutions compare to the total number of cases reported to the police (many of which are not taken on by the NPA). The reality is that successful prosecutions are only a small fraction of total cases.

Another key issue is that under current legislation, once convicted, poachers do not face a minimum sentence; instead, sentences are left to the discretion of the magistrate. Since the beginning of the poaching crisis in 2008, conservation groups have been pushing to have poaching of endangered species listed under the Criminal Law Amendment Act (or Minimum Sentences Act) and a minimum 10-year sentence imposed. Another proposed amendment to legislation would remove the right for rhino poachers to be released on bail.

Recently, bail was granted to eight members of an alleged ten-man poaching syndicate charged with 318 rhino poaching-related offences. A further two alleged poachers were released on R500 bail in a separate incident.

In response to an enquiry regarding reclassifying rhino poaching as a more serious offence, the minister claimed that “We are engaging with our criminal justice system to really ensure that… this is classified as a serious offence. At Cabinet level, we have already decided that this is a priority crime.” However, no concrete action has been taken on the suggested amendments to poaching legislation and sentencing.

“One of the biggest problems is the lack of real political will,” says conservationist Dex Kotze, who led the Global March for elephants and rhinos in Pretoria last year. “The government has had seven consecutive years since the upsurge of poaching in 2008 to change the laws and tighten up the loopholes. But there has been no change in legislation in spite of the record numbers of rhinos being poached.'”

But while conservationists grumble about the lack of action, most agree that harsher jail sentences alone are not enough to halt the stream of rhino horn leaving the country.

This impasse has led to the proposal to legalise trade in rhino horn, based on the argument that legalising the supply of horn would drive criminal syndicates out of the market, whilst the increased commercial benefits of owning rhino would encourage communities and individuals to farm the animals and invest in their protection, leading to an increase in rhino numbers.

One of the strongest counter-arguments against the above is that legal supply through farming could never satisfy rapidly expanding Asian markets, as has been demonstrated by the explosion in demand for ivory by China off the back of South Africa’s 2008 sale of ivory. Opponents of legalisation maintain that the move may in fact lead to an increase in demand, and hasten the extinction of rhinos in the wild. Conservationists also question the ability of the South African, Vietnamese and Chinese governments to eradicate corruption within their own respective countries and implement the effective strict controls necessary to eliminate illegal trading.

The Department of Environmental Affairs has set up a Committee of Inquiry (previously referred to as a ‘Panel of Experts’) to weigh the various arguments and advise Parliament on the feasibility of presenting a proposal to legalise trade at the next CoP (Conference of the Parties) meeting in Cape Town in 2016. However, a lack of transparency in the selection process of the panelists, and the fact that all known committee members are pro-trade, suggests that the committee’s conclusion may be pre-determined.

In response to a query regarding the panel members at a recent press conference, Molewa sounded irritated when she responded that final vetting of committee members had not yet been completed, but assured the audience that the process was being fast-tracked. “It is highly possible we will make an announcement very soon,” the Minister said.

That the selection of this Committee is yet to be finalised has been the standard response to repeated requests for panellist’s names — a response that has worn increasingly thin, since the committee has been meeting since April 2014.

Appointments for stakeholders to make representations to the panel were initially scheduled for November 2014 and then postponed to January 2015; however, the promised meetings have not materialised, and with an announcement on the feasibility of trade promised for March, it seems increasingly unlikely that stakeholders will be properly consulted.

Terri Stander, DA Shadow Deputy Minister of Environmental Affairs, has written to Minister Molewa asking her to clarify the government’s position on trade after a number of parliamentary questions on the subject remained unanswered.

If South Africa is to stand a chance at saving its rhino population in the wild, a careful examination of international demand and markets needs to be undertaken by respected international economists who fully understand today’s Asian markets, the criminal syndicates who work their markets and the new affluent Asian consumers.

Although the current trend of poaching looks dire, conservationists believe that it is not impossible for South Africa to win the poaching war. Effective law enforcement here at home as well as in China and Vietnam, coupled with other anti-poaching measures —such as the introduction of new technologies, whistleblower funds to target middlemen, and real efforts to involve local communities in the wildlife and tourism industries— could bring poaching down to manageable levels and see a recovery of our rhino numbers in the wild.

There are many South Africans truly committed to saving the rhinos. We cannot know how many more rhinos would have been poached without their efforts. But to turn the tide, the government needs to show its full commitment to stopping the carnage — not just to be appearing to be doing so. Maybe next year, Molewa will really have a good news story to tell about the rhinos. DM

Photo: A white rhino and her calf on a game farm in the Waterberg district, some 350km north-west of Johannesburg, South Africa, 08 September 2010. EPA/JON HRUSA