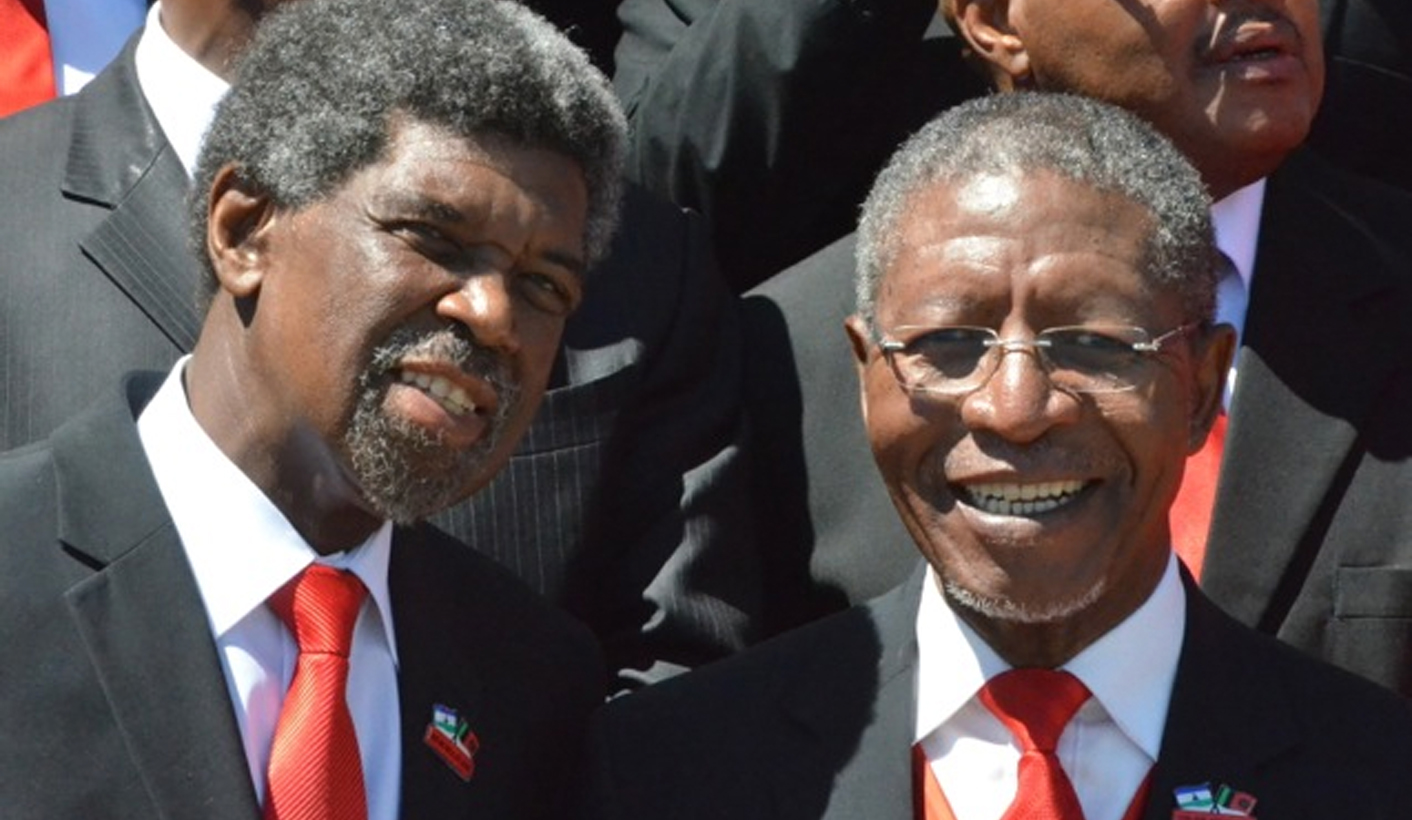 Journalists are the primary watchdogs in any democracy, but what happens when those watchdogs lose their bite? In Lesotho, a pliant, uncritical media is failing hold anyone to account in the run-up to the February elections. By MICHAEL J. JORDAN.

For any democracy to thrive, its media must act as watchdog – holding leaders accountable for their words and deeds. And, yes, take a bite if they fail to deliver.

That’s why it’s so troubling to see how toothless my colleagues in the Lesotho media truly are, especially when their nation needs them most – one month away from the critical 28 February elections. Basotho voters must choose which leaders to entrust with guiding them out of months of political and security crisis, sparked by 30 August coup attempt.

There’s more at stake than the fate of a tiny mountain kingdom that just two years ago was touted as a democratic success in Africa for its peaceful handover of power – yet was derailed by its sixth putsch in half a century of independence, which laid bare endemic corruption and political violence.

More broadly, there may be repercussions for the regional power, the 15-nation Southern African Development Community. Lesotho is the latest test of SADC’s ability to resolve conflicts, yet its lead mediator, South African Deputy President Cyril Ramaphosa, hasn’t uttered a word in public about the root causes of corruption and political violence. If this election spawns bloodshed, would South Africa have to send in troops – as in 1998?

Then there’s the international community. It’s spent well over $1 billion in foreign aid over the past decade to help the Basotho tackle their severe health, development and economic challenges – yet has little to show for it. Just the opposite, in fact: the HIV rate refuses to budge from 23 percent, and Lesotho is sliding down the UN Human-Development Index. The prime culprits: corruption, cronyism, incompetence and pervasive apathy.

So which Basotho politicians, parties and ministry officials would foreign donors prefer as their next set of partners, especially as some deepen their investment here? Or would it be time for the international community to consider whether to pull out of Lesotho – as the Irish Embassy did last year (though Irish Aid remains) – and devote their dollars elsewhere in sub-Sahara Africa?

Back to the Basotho journalists, then. With Lesotho facing this fork in the road, the burden of a noble mission falls to the media: to better inform and educate society, enabling voters to make wiser decisions about whom to elect. Who’s telling the truth? Who isn’t? Who’s delivered results? Who hasn’t? And why?

Instead, the Lesotho election-coverage is deeply flawed, marked by an amnesic superficiality that largely ill-informs, misinforms, even disinforms, the audience. In other words, much of the media does more harm than good.

“It’s a general issue of professionalism: they work under no professional guidelines, are understaffed, without the wisdom of elders to guide them,” says Tsebo Matsasa, national director of the Media Institute of Southern Africa’s Lesotho chapter. “As a result, they become the public-relations officers of whomever they cover. Like being given a press-release, they take it as it is, but don’t interrogate what they say, digging deeply into it. Then they report the next story, forgetting what happened yesterday.”

I’ll analyze one typical example below, to illustrate. But first, an important caveat: I don’t blame my Basotho colleagues for this coverage. As Matsasa suggests, it’s not their fault. I’ve learned first-hand: no university here offers young Basotho a real pound-the-pavement journalism education. Nor is there sustained training for working journalists. While Mozambique is awarded a five-year, US$10 million “Media Strengthening Program,” courtesy of USAID, Lesotho journalists attract no such support. (Though, during Lesotho’s current election campaign, the US Embassy and the UN are supporting voter-education training that includes journalists.)

Since many Lesotho editors themselves have no formal training – instead, learned on the fly – it’s basically “the blind leading the blind” when they send out their reporters to cover politics, economics, health, development and other vital issues.

The good news is, in the Health Journalism trainings I’ve led, I’ve met so many Basotho reporters hungry to acquire skills, to be mentored on how to do journalism right. Then, go out and earn respect for producing journalism that may have impact.

On the other hand, today they operate in a highly polarised environment, where political rivals, radio stations and party loyalists spew words of incitement at each other. Both sides are desperate to claim victory on 28 February. Meanwhile, reporters see an opposition radio station vandalised, its presenter viciously assaulted, yet no arrests. Then, after the putsch, a leading editor and reporter arrested for a day – for publishing the truth.

Despite the occasional bold piece of reporting today, the climate of fear and culture of impunity clearly intimidates the reporters – as I’ve experienced myself.

This helps explain the reporting they produce. One recent, illuminating example, teased atop a front page, jumping inside: ‘DC to restore Lesotho’s former glory – Mosisili’ runs the headline. It highlights a campaign event of former Prime Minister Pakalitha Mosisili, whose 14-year rule ended in 2012. He now leads the Democratic Congress – the country’s single-largest party.

Former glory? I was stunned. Did he really use that word – dripping in religiosity in a heavily Christian country – to describe his reign? Again, according to all major health indicators, Lesotho is one of the world’s sickliest societies. To be fair and accurate, that trend did not begin in 2012, when Prime Minister Tom Thabane’s coalition took power.

Indeed, aid-workers bemoan how stubbornly Lesotho’s 23 percent rate of HIV infection, now the world’s second highest, has stood for more than a decade, traumatising every Basotho family. So where’s the glory of Lesotho’s recent past?

I flipped the page to read the piece. Straight speech coverage: here’s what he says, here’s what he promise. No mention of “glory” – certainly not in Mosisili’s quotes.

Two things. First, if it were the editor, not reporter, who dreamt up the former-glory headline, was that their interpretation of Mosisili’s vision, or how he views his reign? Or, is the headline-writer politicised, romanticising his reign? Or, is there a whiff of intellectual laziness: We need a headline, quick! He wants to return to power? To restore the former glory!

Regardless, that’s irresponsible journalism. We wordsmiths should say what we mean, mean what we say. Headlines give readers a first, often lasting, impression. What proof exists to support the accuracy of former glory?

Then, the article’s substance. Mosisili had laid out his party’s “manifesto,” highlighting 13 planks that, if truly delivered, may bring genuine glory to Lesotho: economic transformation; infrastructure development; “unleashing latent potential of youth”; “education and training: investing in people”; “efficient service delivery”; and so on.

Frankly, such lofty, generic promises could be copied-and-pasted from the Internet, from any party’s platform, anywhere in the world. More relevant is that Mosisili actually enjoyed 14 years in power – a long track-record, generating plentiful evidence for what was achieved, what wasn’t, and why not. But you wouldn’t find that in this article. Which makes it more stenography than journalism. In effect, a free, full-page ad. Even propaganda.

I’m not suggesting this one reporter, this one media outlet, should “go after” Mosisili and his DC. (Thabane is surely no angel, and is now accused – along with his new wife – of buying votes with food.) Not only would that justifiably be perceived as one-sided, but could even be dangerous around here. Besides, it may be that no Lesotho leader’s hands are clean.

Instead, strength in numbers. Perhaps these unique circumstances require a unique response: a consortium of media-houses to explore and document the successes and failures of Mosisili’s 14-year rule, across the spectrum of government ministries. Likewise, conduct precisely the same examination of the Thabane coalition’s two-plus years in power.

No opinion, just facts. Such serious and responsible, deep and meaningful reporting surely takes time and effort. But something meaty could also be generated in a fortnight.

Then, as the campaign heats up before the February vote, publish that widely, which sends a message to political candidates across the aisles: Don’t try to deceive us – or the Basotho public. We’ll hold you accountable for your words … and deeds.

Or maybe that’s too ambitious. I’m also ready to organise a one-day training for my colleagues, to help sharpen their election-coverage reporting skills. Let’s see who in the international community would join me – during this, the Lesotho media’s moment of truth. DM

Based in Lesotho since 2011, Michael J. Jordan is the lone Western correspondent living in the country – and covering its crisis – while also its only journalism-skills trainer.