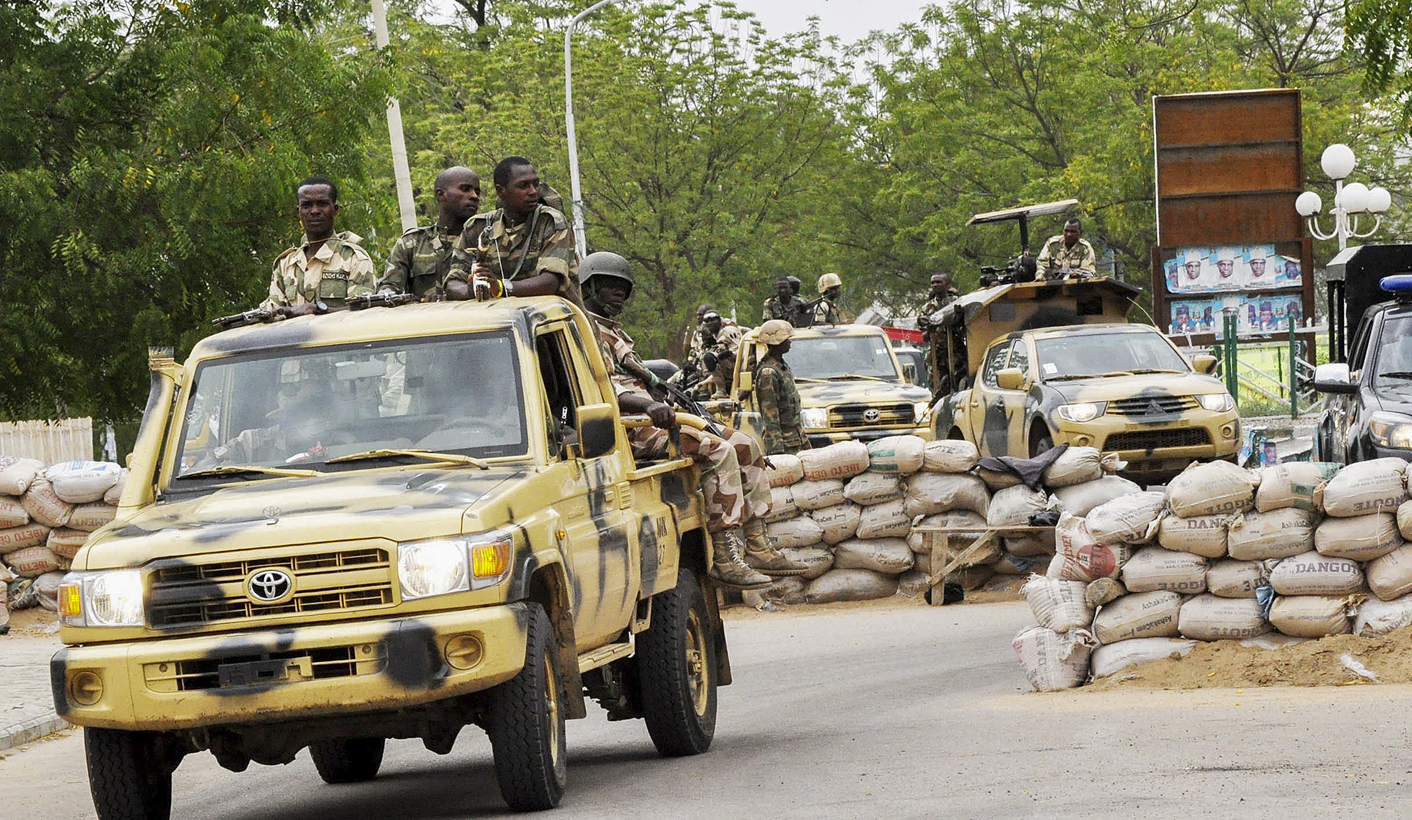 Maiduguri is the jewel of Nigeria’s north-east: it is the biggest city, the most important trading hub and a historical icon. It was also the birth place of Boko Haram, and the militant group is determined to make it the capital of its Islamic Caliphate. The city is under siege, and it seems to be only a matter of time before Boko Haram make good on this threat. By SIMON ALLISON.

In 2002, the group we know today as Boko Haram began life in a mosque in Maiduguri, the capital of Borno state and the most populous and important city on north-eastern Nigeria. Twelve years later, Boko Haram are coming home – bigger, stronger and more dangerous than ever.

News that this weekend’s attack on the city was repelled by Nigerian security forces – a rare victory for the beleaguered seventh division of the Nigerian army, which has done more fleeing than fighting in recent months – is no cause for celebration. This was just the first wave. Boko Haram will be back to capture the city that will be the capital of its Islamic Caliphate, and next time it will do so in greater force and from an even stronger strategic position.

The Maiduguri offensive was accompanied by an attack on Monguno, a garrison town that hosts an army base and sits astride one of the main roads leading into Maidiguri. It is just 140 kilometres away from the state capital. This attack was an unquestioned success for Boko Haram: it captured the army base, with its equipment, and neutralised the 1,400 soldiers stationed there (the fate of the soldiers is still unclear, according to Sahara Reporters; some were likely killed, while others escaped). “We could have overpowered the insurgents, but there was no[t] enough ammunition,” said one army officer who was present, speaking to Nigeria’s Premium Times, in an admission that symbolises everything that is wrong with Nigeria’s military-led counter-terrorism approach.

There are five main roads that lead into Maiduguri. Boko Haram now control major towns along four of them, all within a radius of less than 140km. It occupies Monguno to the north; Dikwa to the east; Bama to the south-east; and Damboa to the south-west. Only the western approach, from the Yobe state capital of Damaturu, remains in government hands (and that control is tenuous at best).

To all intents and purposes, Maiduguri is under siege, and Boko Haram is tightening the noose. It seems only a matter of time before it too falls to the Islamists.

“Boko Haram has spent the last 15 months tightening the belt around Maiduguri by taking over roads, smuggling, trafficking and supply routes, as well as many smaller border towns and villages. Their regular attacks on the bases and barracks of the Nigerian army have not only forced the latter to retreat from many areas of the north-east, but allowed Boko Haram to re-supply and improve their armament. Based on the success of this long-term strategy so far, it is very difficult to imagine a scenario where Maiduguri does not fall into Boko Haram’s hands, albeit for a short period,” said Dr. Yan St-Pierre, CEO and counter-terrorism specialist with the Modern Security Consulting Group.

From a military perspective, this would be a stunning achievement for Boko Haram, who have somehow morphed from a handful of religious zealots into a fighting force capable of taking on, and beating, one of Africa’s largest armies. For that army – chronically under-trained and under-equipped – it would be yet another embarrassing defeat to add to the growing list of humiliations dished out by Boko Haram.

It would also change Nigeria’s political landscape, perhaps irrevocably. “Maiduguri is very important, extremely important,” said Martin Ewi, senior researcher at the Institute for Security Studies. “We’re talking about two million people who live in that city. It’s the capital of Borno state, and it has been Boko Haram’s headquarters before. That’s where they grew up, where they [became] what they are now. The strategic importance of Maiduguri cannot be overestimated. If they can take Maiduguri, taking over the whole state will be a matter of time.”

It’s not easy to imagine what this would mean for the city’s inhabitants, who now include hundreds of thousands of internally displaced people who have already escaped Boko Haram once before. Amnesty International is already warning of a disastrous humanitarian crisis.

Not everything is going Boko Haram’s way, however. Ryan Cummings, chief Africa analyst for political risk firm Red24, said that Boko Haram leader Abubakar Shekau may have been spooked by talk of deploying a regional or international force in the area. “Shekau and Boko Haram may be unsettled and the attack on Monguno today may be part of a strategy by the sect to disable as many military installations and acquire as much arms possible before they get engaged in a multi-front war,” he told the Daily Maverick.

Whatever the motivation, it worked. Monguno fell, and can anyone stop Maiduguri from falling next? DM

Photo: An undated photograph from 2014 made available 13 January 2015 shows members of the Nigerian military patrolling in Maiduguri, North East Nigeria. The Nigerian government said up to 150 people had been killed by Boko Haram in the country’s north last week and dismissed widespread reports that 2,000 people had died. EPA/STR