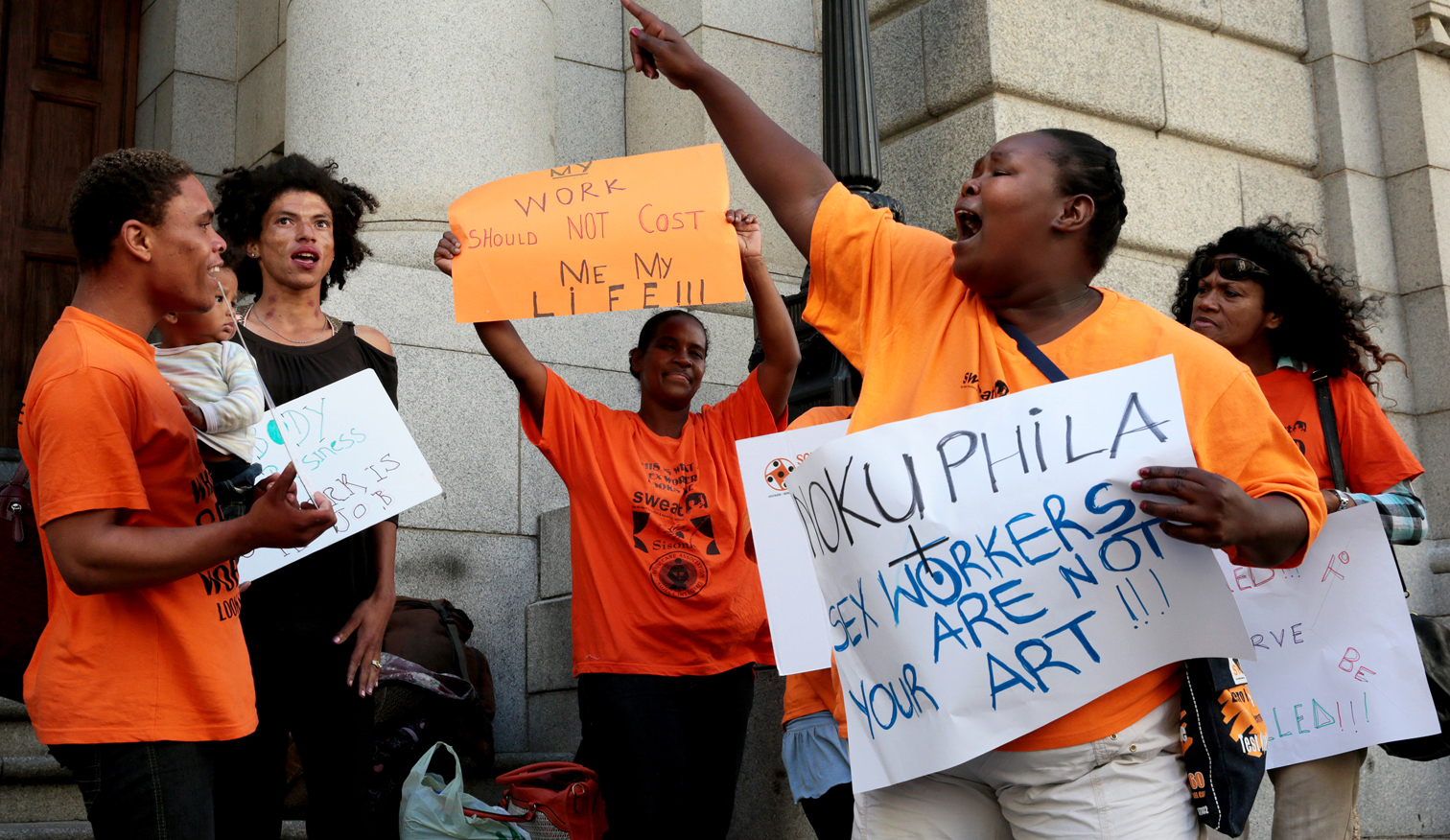 A year ago, some Cape Town boys returned home late at night with a sex worker. They refused to pay her. What ensued seems blatantly unfair. By Abigail McDougall for GROUNDUP.

During the incident in question, the sex worker grabbed a cellphone and refused to give it back until the boys paid her the price that they had agreed. It escalated; she started shouting. Someone called the police. Instead of telling the guys to pay her, the police threw her into their van and returned the cellphone to the boys. It seemed so obviously, obscenely unfair: they had made a deal, accepted her service, and then refused to pay her.

It is because of this unjust incident that on Tuesday morning, I joined activists and members of the Sex Workers’ Education and Advocacy Taskforce (SWEAT), and Sisonke, the national movement of sex workers in a picket outside the Wynberg Magistrates’ Court. We shouted “My body, my business!”

Our orange T-shirts read: “My work shouldn’t cost me my life.” Our protest was in support of Cynthia Joni, who was inside the court facing Tim Osrin, who allegedly assaulted her in October last year, because he thought she was a sex worker.

The rights of all South Africans are set out in the Bill of Rights in Chapter Two of the Constitution. These include the right to life and the right to human dignity. Particularly relevant is Section 12, paragraph 1c: “The right to be free from all forms of violence from either public or private sources,” and 2, “The right to bodily and psychological integrity, which includes the right… to security in and control over their body.”

The Constitution is the supreme law of South Africa; it “applies to all law, and binds the legislature, the executive, the judiciary and all organs of state”. The Bill of Rights applies to all people: it is also supposed to protect those who break the law and who contravene what society finds acceptable. However, the treatment of the sex worker in my street by the police and her clients, and the tale of Tim Osrin, suggest that this is not the case.

Attitudes towards sex work stem from a combination of the illegality of the work and powerful social stigma. It remains illegal in terms of the Sexual Offences Act, and sex workers are treated as criminals. A 2008 book, Selling Sex in Cape Town, found that sex workers are vulnerable to being arrested and fined by the police, as well as to police abuse. Illegality means that sex workers are hesitant to turn to the police or the courts when crimes are committed against them by exploitative clients or the police.

At the same time, sex workers are stigmatised and shunned in a South Africa where prevailing attitudes remain conservative, as found in a 2013 Pew Research Centre study. Sex workers are viewed as a threat to the moral fabric, and neither the state nor the public are willing to stand up for sex workers’ rights.

The intersection of criminality and stigma marginalises sex workers. They are treated with contempt, to the extent that Osrin thought he could wantonly beat up a sex worker in broad daylight and get away with it. Joni is not a sex worker and she actually reported the case. Given the way sex workers are treated by the police, it is likely that many assaults on them go unreported.

SWEAT reports American research which found that female sex workers are 18 times more likely to be murdered than other women. Decriminalising sex work would free sex workers to report violence and hate crimes against them to the police, force the police to protect people working in an industry which exposes them to exploitation, and show the public that they have equal rights. However, sex work remains illegal, and the rights of those who practice it are violated with impunity.

These dynamics have become particularly visceral in Kenilworth, where in August of 2014 the body of a murdered 19-year-old sex worker known as Kleintjie was found. A number of local residents, including the unknown people behind the Kenilworth Residents Against Prostitution campaign to “keep the KRAP off our streets”, believe sex workers are a scourge and should be removed. The police commit themselves to harsher measures in statements to the press. And Ian Iverson, the DA ward councillor, refuses to engage with SWEAT or address the issue, when he could potentially play a role as a mediator between sex workers, residents, and the police.

Iverson wrote in a response letter to SWEAT: “Prostitution is still illegal in South Africa and I am not going to assist you with an illegal activity. I am going to do everything in my power to rid the area of prostitutes who are responsible for bringing down the tone of the area. I believe that the vast majority of local residents would support me.” The situation in Kenilworth seems intractable, although SWEAT intends to persist with engaging Iverson.

After waiting outside the court for the verdict on Osrin (the case was postponed and is probably going to become a plea-bargaining process), we march to the DA’s office in Kenilworth. We sing, shout, catcall, whistle, and demand Iverson. He does not appear.

Yes, sex work is illegal in South Africa. However, the Constitution mandates that the rights of all people should be equally protected by all arms of the government. This includes the police, and the municipality. If Kenilworth is a microcosm of South Africa’s dynamics around sex work, hopefully Iverson is an exception. Hopefully, other councillors will understand their responsibility to ensure safety and basic rights for all people living and working in their communities, instead of blocking their ears, hiding in their offices, and calling the police. DM

This feature was first published at www.groundup.org.za. The opinions expressed are solely those of the author. No inference should be made about whether these reflect the editorial position of GroundUp.