Somewhere over the rainbow, racism and xenophobia’s dark cloud 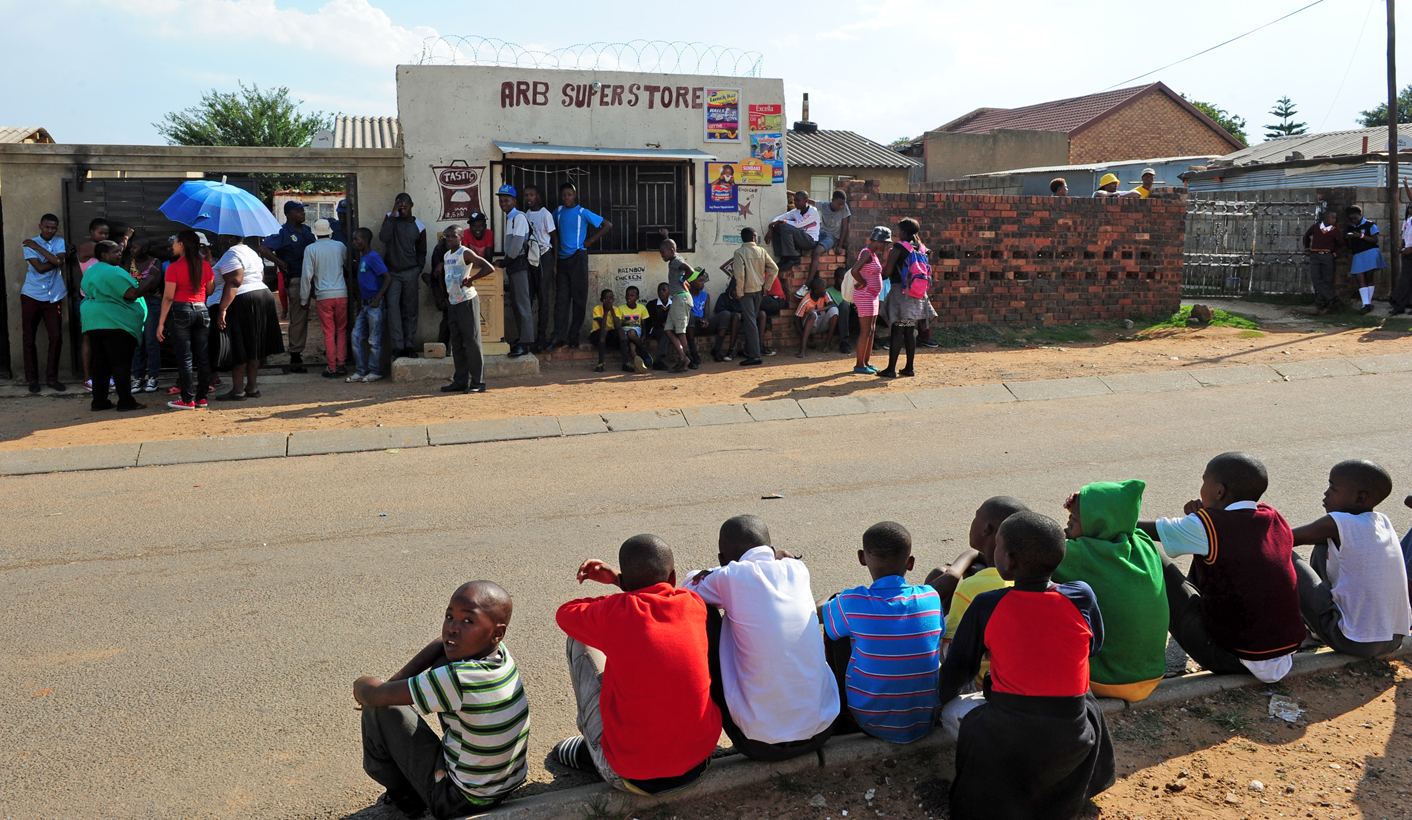 We have again resorted to the lowest form of human behaviour. Incidents of racism and xenophobia have again exposed South Africa as a superficial, ugly, violent nation that lacks respect for other human beings. From exclusive restaurants in Cape Town that discriminate against black people to the killing of foreign nationals and looting of their shops in Soweto, we are showing ourselves to be once again a nation filled with hate. The façade of a country that once represented the model of reconciliation and nation building is being gradually shattered. We are what we are: a nation in decline and at war with itself. By RANJENI MUNUSAMY.

It is difficult to watch terrorists gun down a police officer in Paris after the Charlie Hebdo attack or satellite footage of burnt out towns in Nigeria destroyed by Boko Haram and not worry about issues of global security and rampant violence in the world. We count our blessings that South Africa is not exposed to such extremist activity, and is a relatively stable nation.

The scenes of violence that played out in Soweto this week show us the evil streak in our society that makes us no better than any other part of the world where people destroy others’ lives through savagery parading as a just cause. What started out as anger against a single foreign shop owner who allegedly shot dead a 14-year-old boy in Snake Park, has flared into looting and violence in many parts of Soweto.

Gauteng police commissioner Lesetja Mothiba said initially that there was no violence, just looting, and denied the attacks were xenophobic even though only foreign nationals were targeted. Gauteng community safety MEC Sizakele Nkosi-Malubane also claimed the attacks were “criminality”, not an outbreak of xenophobia. By Thursday night, Mothiba told PowerFM, “The whole of Soweto is now engulfed… They are looting all over.” More police were deployed to the hotspots but reports of looting continued till late into the night.

Footage and media reports show the active involvement of young children in the looting spree. One resident told Eyewitness News he witnessed a group of school children trying to loot a shop in Meadowlands. “I saw a group of people and school kids, they were wanting to break down the shop.”

A 74-year-old Malawian shopkeeper, blind in one eye and partially deaf, was disembowelled and burnt in Durban Deep, The Star reported. He had nothing to do with the killing of the boy in Snake Park, and is not even of the same nationality as the man who allegedly shot the child. The old man died a brutal death for one reason alone: he was not South African.

This is South Africa in the year 2015, 21 years into democratic rule. It is seven years since the last mass outbreak of xenophobic violence when 62 people were killed and thousands of migrants were displaced. The sound bites are the same seven years later – foreigners take South Africans’ jobs and must go back to their own countries. This in the same week when we are celebrating African football, and cheering our national team as it competes against other nations in the Africa Cup of Nations in Equatorial Guinea.

We are a confused and self-loathing nation these days. We insult and discriminate against each other on the basis of race and perpetrate violence against others because they are not like us. From three white men assaulting a black cleaner in Cape Town, to the minister of communications Faith Muthambi refusing to be held to account by a “white male babysitter” (Democratic Alliance MP Gavin Davis), racial tensions are an inherent part of South African life.

What happened that rendered South Africa’s reconciliation project a farce? This was the “Rainbow People of God”, according to Archbishop Emeritus Desmond Tutu, and we were so thrilled by our unique process of reconciliation that we even exported our formula to other conflict zones in the world. And now it is coming apart at the seams.

Racism is innate in our society says Dr Saths Cooper, president of the International Union of Psychological Science, and there was an assumption that South Africa could automatically move from a discriminatory system to a democratic system. Just because we have a Constitution and institutions that define and protect the democratic system does not mean nation building would happen on its own, he said.

“The truth is we don’t have nation building,” Cooper said. The Twitter rant by Nelson Mandela’s former PA Zelda la Grange exposed the reconciliation process espoused by Madiba to be a “colossal failure”. “Just a year after his death, she expressed clearly racist sentiments… there is a discrepancy between what she claimed to stand for and her innermost feelings,” Cooper said.

He said many people were reverting to expressing their true feelings on race. Incidents of racism in schools and involving young adults were particularly concerning. There is a perception about “born frees” being immune to racism, but this is not the case. “Socialisation and upbringing relate to precepts and views that get handed down. This cannot be divorced from social context those individuals brought up in,” Cooper said.

For this reason, it should be part of the school curriculum to teach the values of a non-racial democratic society. “Otherwise the education system will continue to breed these inequalities and innermost fears and hatred will continue to emerge,” Cooper said.

The economic and social gaps in South Africa are wider than ever and there is a racially polarised identity that remains in the hearts and minds of people. He said the weaknesses and incidents of corruption involving the political leadership provided succour for people to embellish racist views.

“Although Apartheid was an inherently corrupt system, in which the minority aggrandised themselves, you find people who believe corruption is in the DNA of black people,” said Cooper.

There is a “low level civil war” in our society, discernible through various forms of violence including racial and xenophobic. “We have through the lack of self respect grown to disrespect others. The value of life has diminished. Our sense of identity has been fractured to such an extent that we go out and commit these acts,” Cooper said.

So what can be done? Incidents of racism are dealt with through the courts and institutions like the Human Rights Commission. The police deal with incidents of violence, including xenophobia.

But how does this nation heal and learn to stop turning on itself?

Cooper says our society requires strong leadership, but not only political. Intellectuals, religious and social formations need to intervene. He said South Africa lacked voices of morality and those of the struggle stalwarts are fading away.

On Thursday, there was one such voice. The Ahmed Kathrada Foundation spoke out against the violence in Soweto.

“We consider these attacks to be xenophobic and condemn them as such. We urge all community leaders to rally residents around the ideals upon which our Constitution and democracy is founded. There should be a fundamental respect for human life and property, without discrimination.”

The Kathrada Foundation went on to say, “However, lawlessness, coupled with xenophobia, results in a toxic situation that would require more than just policing. We would welcome the intervention of civil society and government structures to prevent the situation from spiralling entirely out of control, and to assist in resolving underlying issues.”

The underlying issues are complex. Cosatu said these, which include unemployment, poverty and crime, should never be blamed on foreigners. “These problems are structural, rooted in years of colonialism and apartheid capitalism which kept the majority of South Africans in desperate poverty and denied them any democratic means to improve their plight, not by foreign nationals, who are themselves victims of the same problems of competing for limited resources, in the context of increasingly unregulated trading,” Cosatu said.

By midnight on Thursday, after three days of violence and death, there was no statement from national government or the African National Congress on the situation in Soweto. The matter was seemingly left to the police and the Gauteng MEC for community safety to handle. In 2008, government initially denied the attacks were xenophobic and then took too long to intervene to stop them. It would be a tragedy to repeat the mistakes of the past.

The manifestation of racism and xenophobia is symptomatic of the general decline of our society. Disrespect for others is evident from the top down, from the lack of accountability to hatred of those different from ourselves. For as long as this is not changed and our values are diminished, our society will remain deeply troubled. And history is doomed to repeat itself. DM

Photo: People gather outside a Somali-owned shop in Meadowlands, Soweto during violent looting of foreign-owned shops in the area, Thursday, 22 January 2015. Two people have been shot dead and two injured since violence broke out between locals and foreigners. Foreign-owned shops have been looted in the area. The looting started on Monday after 14-year-old Mthetheleli Siphiwe Mahori was shot dead, allegedly by a foreign shop owner in Snake Park. He was apparently part of a group that tried to rob the shop. Many foreigners had left Soweto for their own safety. Picture: Werner Beukes/SAPA