Giving breath to a dying history 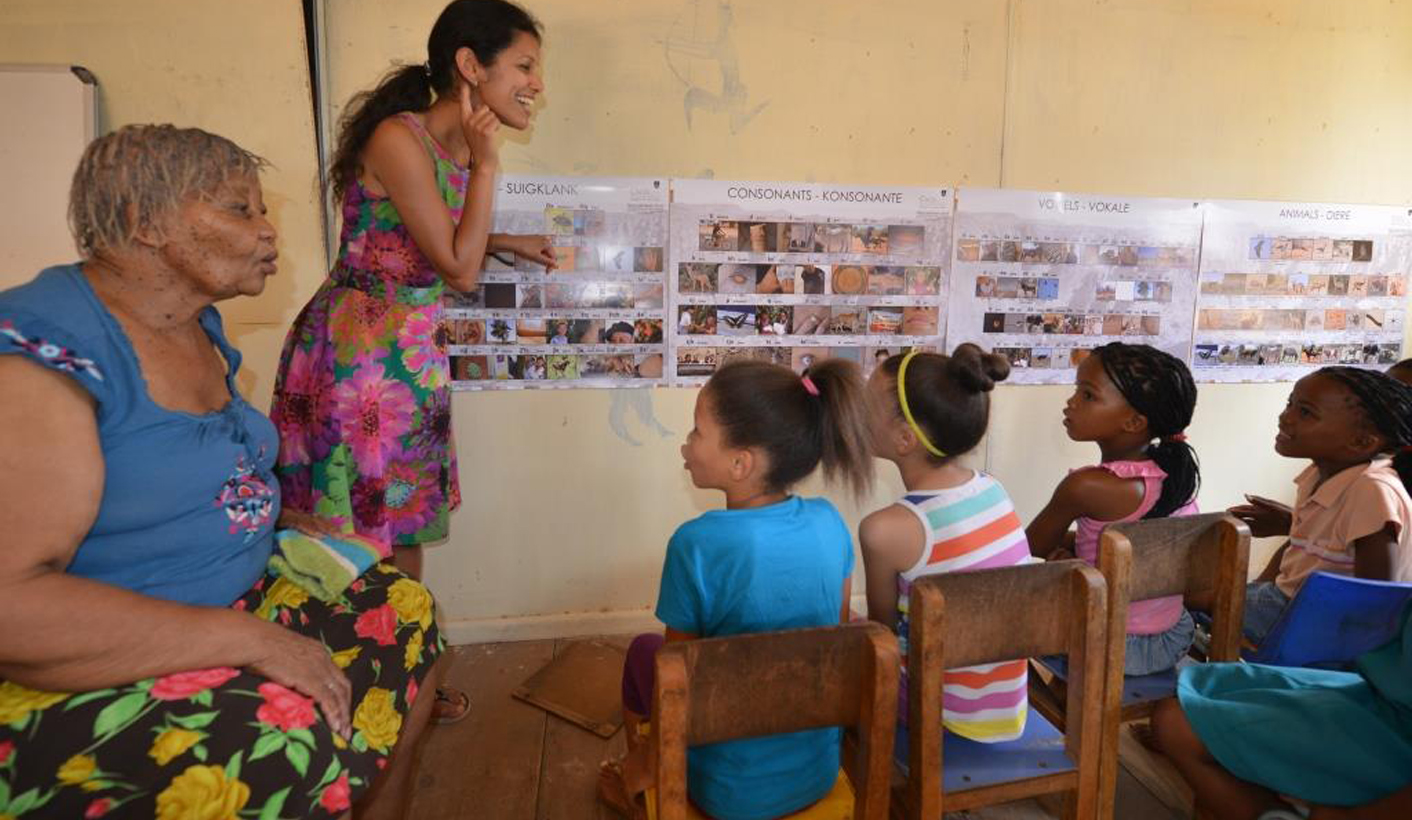 Three elderly sisters survive who speak the N?uu language. In the heat of Upington, one of them, lacking the resources to do so elsewhere, is teaching local children to speak it outside her house. With the help of a local academic team, they’ve even developed an orthography to ensure the history and heritage doesn’t vanish. By MARELISE VAN DER MERWE.

The director of the Centre for African Language Diversity (CALDi) at University of Cape Town (UCT) drives a Rapid Response car. It doesn’t have an actual siren, but it’s marked much like an emergency vehicle: yellow stripes, the works, ready to leap at a moment’s notice to go and help resuscitate a dying language. One might wonder whether it’s illegal to do this, but it’s not – it’s merely an elegant parody on wheels; an attractive design, actually, with the background subtly marked with maps of the country’s endangered language profile.

This week, the rapid response vehicle is out in Upington. It’s visiting the site of some long-term work, the N?ng Language Project, working with some partners of ?Khomani San heritage.

There are just five surviving speakers of N?ng left in the world.

?’Au, the Eastern variety of N?ng, is spoken by Hannie Koerant and Fytjie Sanna Rooi in Olifantshoek.

The Western variety of N?ng, better known as N?uu, is spoken by three sisters, named Hanna Koper, Griet Seekoei and Katrina Esau. None of them use N?ng on a daily basis anymore, but communicate in Afrikaans, their mother tongue.

Many of the languages known in the linguistics field as non-Bantu click languages have been dying a slow death over a period of centuries. For that matter, numerous languages of all descriptions throughout Africa are endangered: some 2,000 languages on the continent are only spoken by small communities, and are not being passed down to children.

Here in Upington, the abovementioned Katrina Esau – known locally as ‘Ouma Geelmeid’ – has worked tirelessly to preserve the N?uu language, ensuring that there will still be some speakers that survive when she has passed away. She received the Order of the Baobab in Silver for her work in heritage preservation on 27 April 2014.

Esau herself never learnt to read. But for the past nine years, she and her granddaughter, Claudia du Plessis, have been teaching N?uu to children in their community. Claudia and another learner, Mary-Ann Prins, who can read, decipher the N?uu texts with Esau’s help. Between 30 and 40 children from the neighbourhood acquire N?uu phrases and songs in the classes, which take place three times a week.

Here’s something interesting: it’s not just the question of the language itself dying out. It’s also an issue of lifestyles changing, and applicability of words. How do you invent new words in a language that didn’t have words for the new things you use? What is an MP3 player in N?uu? A power bank? (There’s a lot of borrowing of terms, certainly.) And what happens to the words one no longer uses?

Scholars Sands, Miller and Brugman noted that some words were likely forever lost. “The N|uu speakers who had not grown up in the bush had difficulty remembering some plant and animal terms until prompted by those who had grown up foraging. For instance, the only speaker who could initially remember the term for ‘ostrich chick’, /??’o?/ was male and had hunted in his youth. No speaker recognised the term for ‘arrow’ cited by Doke (1936); but rather used the term /?au/, which Doke translated as ‘bow’, to mean ‘bow and arrow’. It is possible that there has been a significant loss of plant-related vocabulary in N|uu. We found only 44 named plants out of 150 species and subspecies used traditionally.”

The issue of preserving the language, practically speaking, is an interesting one. How does one ensure the language is preserved? Especially when it is handed down orally, but nobody actually speaks it on a daily basis? The team at the Language Project took a novel route, developing a brand-new orthography for N|uu which is now being taught to the learners.

“Based on existing documentation, we worked closely with Ouma Geelmeid to identify the distinctive sounds of this language. The practical orthography consists of 112 speech sounds, of which 45 are clicks. Ouma Geelmeid, assisted by her granddaughter Claudia, are using the alphabet charts and teaching materials developed in the CALDi project,” says Dr Sheena Shah, a postdoctoral fellow and director of the Language Project.

“Ouma Geelmeid teaches the language in a fun and interactive way, and has developed many songs and games to teach the children the N|uu language. The children enjoy seeing themselves featured in the educational materials produced in the CALDi project. They sing the N|uu songs and play the games even outside class,” she says.

For many of the children, this is the only education they receive. Many of them are not enrolled at government schools. “Obviously this is an undesirable situation and efforts should be made to have all children attending schools,” says Shah. But for the children, who are otherwise receiving little stimulation, it is a start. “With Afrikaans as their mother tongue, English is gaining importance in their daily lives. Learning N|uu as their heritage language will help them to relate to their ancestral past and the community at present.”

This multilingualism, believes CALDi director Dr Matthias Brenzinger, will stand the learners in good stead and ultimately aid their cognitive development. “Speakers of small languages are and always were multilingual,” he says. “The European Nation State ideology with ‘one people, one country, one language’ luckily never worked out for multilingual and multicultural African states. And this is the reason why one third of the world’s languages are spoken on the African continent.”

Multilingualism has multiple benefits into adulthood, too, he adds. “In a global world, grounding in local cultures becomes increasingly important, especially for marginalised communities. Language plays a significant role in that. Another aspect of mental health is that research shows that multilingualism lowers the risk of Alzheimer’s,” says Brenzinger.

Nonetheless, despite the success of the programme, the perks of multilingualism and the enthusiasm with which the children being taught are embracing it, the programme does face its share of problems. Esau’s Order of the Baobab is all very well, but practical support is needed from local government. “The N|uu language activists are struggling for the last two years with the municipality for the allocation of a plot where they can build a community centre and a school building,” says Shah. “The existing wooden school building had been seriously damaged by a fire and for that reason teaching takes place outside at Ouma Geelmeid’s home.”

For Shah and the N|uu language activists, giving up is not an option, however. ?Khomani activists are working hard throughout the country to ensure their cultural heritage is preserved after generations of prejudice and persecution, and this project is no exception. “Even though the language will not survive as a fully-fledged medium of communication, it constitutes an important asset of the ?Khomani ethnic identity,” she says. “The language helps to regain self-esteem after centuries of being discriminated against and looked down upon as Bushmen.

“The language documentation, in addition, contributes to the academic discourse on the linguistic past of Southern Africa. The archived language documents on N|uu, such as the one in the Westphal holdings of UCT, can be discussed and analysed with the help of speakers.”

Will the language be used, though? That’s the key question. It’s no good only to keep artefacts as academic resources, and to document the records of speakers’ stories. It is crucial to return historical items to their sources – to communities and descendants – in consumable, accessible form wherever possible, Brenzinger believes. “Linguists can’t save languages,” he says. “It’s only possible through the speakers. It’s just archiving if it’s not actually used.”

In South Africa in particular, he points out, there is a problem of policy versus practice. “The language policy is perfect,” he says. “We have 11 official languages. Where else will you get that? But the implementation is not really taking place because there is not enough local expertise. That’s why it is very important to have African linguists trained in Africa.

“Language in Africa is of outstanding importance, as there are so few written records,” adds Brenzinger. “Oral traditions conveyed and preserved in African languages are often the only key for understanding the past. Languages spoken today allow for reconstructing migrations and other historical events. If we lose these languages, we lose an important source for understanding our history.

“Diversity is not a threat – it is a resource.” DM