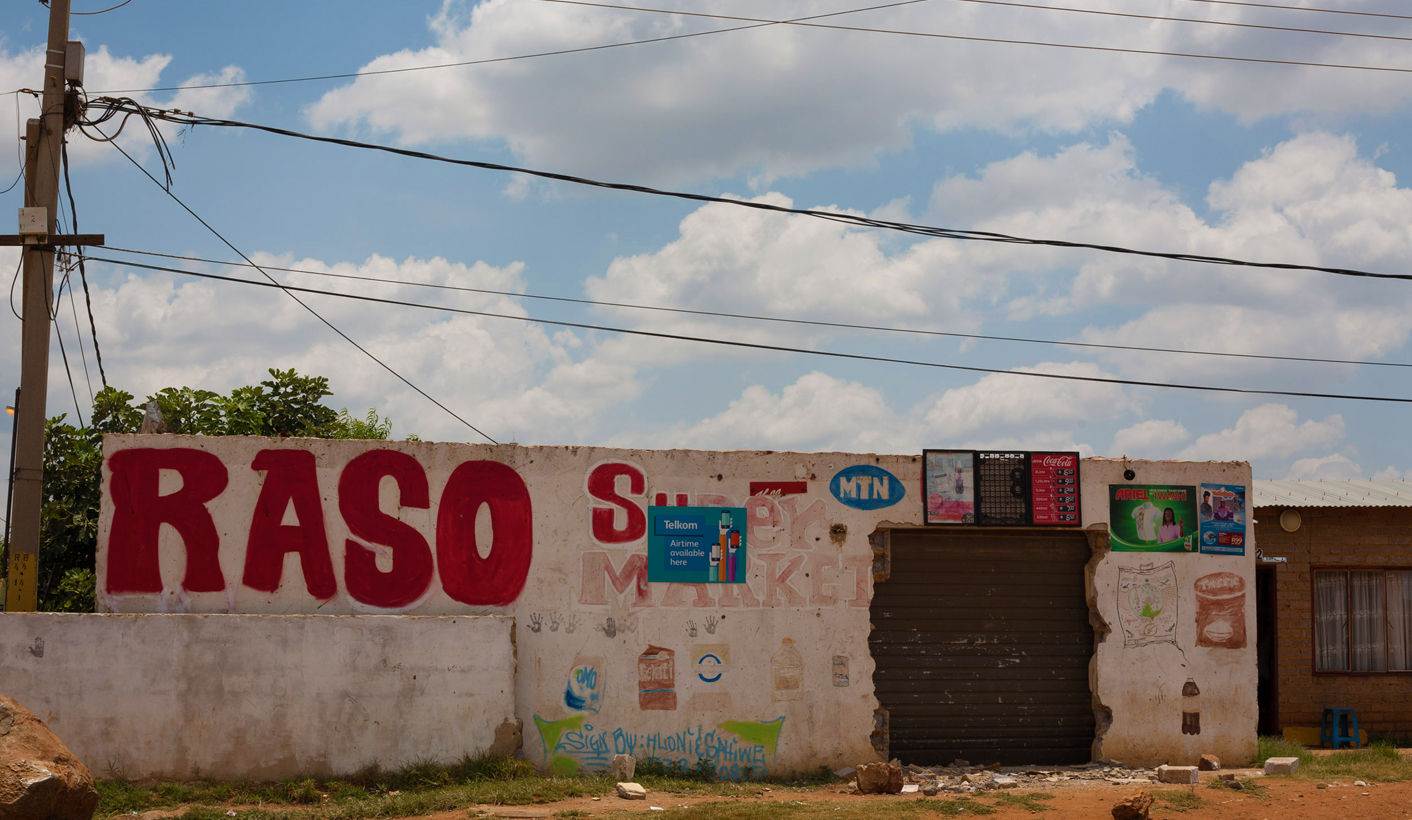 Spaza shops were looted across Snake Park, Zola and Emdeni in Soweto this week. GREG NICOLSON and BHEKI C. SIMELANE detail how a young man standing outside a store led to residents going on a rampage, the death of a 14-year-old boy, and foreign shop owners fleeing the township, once again raising the spectre of xenophobia.

It started with a nyaope addict at the Waka Waka.

On Monday, 17:00, an 18-year-old boy leaned against the store’s outside wall. He’s a nyaope addict, everyone says, and many claim he regularly stole from the store. When one of the Somali nationals who works there spotted him he confronted the boy and told him to leave because he was only there to steal.

Zwane points down the road.

There he is, the nyaope boy, shovelling debris into a wheelbarrow. “I hate them [foreign shop owners] because they are killing local businesses, they don’t pay taxes and they don’t hire locals,” says the 18-year-old, who wouldn’t give us his name. His eyes are vacant. A layer of saliva has whitened on the edges of his lips and his hands are dusty from the work. He says it was a case of mistaken identity; there must be another lanky, dark thief in the area.

Threatened, he refused to leave the store. The shop keeper got a panga. “He went crazy,” Zwane remembers of the boy. He searched for stones to throw. The shop keeper called for a colleague.

The colleague brought a gun and threatened to shoot the boy. “Then kill me,” he retorted, still refusing to leave, and began throwing rocks into the store.

Community members gathered to watch. When the second Somali branded a pistol, someone called the police. They wanted them to search the store for weapons. Multiple witnesses told Daily Maverick that while the police were searching, the individual who owns the store, the boss, arrived, entered and left. The police finished searching and didn’t find a gun.

Until then it was just a young man on nyaope, a Somali spaza shop, a panga and a gun. But onlookers had seen a firearm and when the police failed to find it, the community thought the cops were protecting the Somali store owners, maybe letting the boss go with the gun, or taking a bribe to ignore the incident. The gist: The foreigners had weapons. The foreigners made threats. The foreigners can subvert justice. And they have the gall to do business here.

The community wouldn’t tolerate it anymore.

The outraged onlookers held a meeting. One source said a leader in the area, the identity of whom is known to Daily Maverick but we won’t publish as we have not been able to independently corroborate the claim, announced, “I do not personally condone xenophobia, but this is absolutely ridiculous.” Something had to be done.

“As the community gathered, it was resolved that we should strike and the first attack was in block four,” says Zwane. They left the police to protect the Waka Waka Supermarket and pounced on the Bafana Shop around the corner. The Pakastani workers were shoved aside while the store was emptied. Nothing was left when the police arrived and the community moved to the next target, Raso Supermarket.

On the corner of 108th and 56th Streets, a woman peels chicken feet. Under rows of power lines, the store faces an open field. On the other side is the community hall. RASO is scrawled large in red paint on a worn white wall. The concrete entrance to the store has been damaged and frames the roller door like demented edges of a serrated bread knife.

Wednesday’s issue of The Star had a descriptive account of what happened when the looters moved to Raso Supermarket. It said the owner, whom we are told is Pakistani, was asleep and thought there were customers wanting to be served. He asked them to return the next day. They tried to break in. “The owner fired a warning shot and they fled. They returned, and continued to try to break in, and that’s when he shot again,” an anonymous resident told the newspaper.

Siphiwe Mahori, 14 years old, had been sent on an errand by his family, but somehow he ended up on the scene with the looters. He was shot in the neck and died within 15 minutes. Lebogang Ncamla, 23, was shot three times in the arm.

“Please help,” were Mahori’s last strained words, bleeding at the entrance to the spaza, according to a resident on the scene.

On the same road as Waka Waka, and next door to the 18-year-old nyaope boy’s home, sits the Mahori family’s RDP. The boy’s father said barely a line before ushering us to a yard with two back rooms: “I’m just disappointed these foreign shop owners are not here to help or be helped, but they are here to ruin our lives.”

Norman Mdingi, 36, a neighbour speaking for the family sits under a tree. “As you can see there is a deafening silence inside the house. Everyone inside is still in pain and in shock,” he says.

“He died in my arms,” Mdingi continues, his palms upwards. Mahori went to Mzoro Primary School, which catered to the boy’s learning disability. He loved bicycles, could fix them “in a whim”, and built his own bike from various parts he could find. He was respectful and had an older sister, younger brother and both parents, who are unemployed, says Mdingi.

In closing, Mdingi pleads, “Please ask the government to help us end this nyaope scourge in the area because nyaope was the cause of it all.”

Photo: Norman Mdingi, 36, a neighbour and family friend of the family of Siphiwe Mahori, the 14-year-old boy killed in the violence, poses with a bicycle, so loved by Siphiwe. (Greg Nicolson)

But nyaope didn’t prompt residents to attack other foreign-owned stores for what happened at Waka Waka Supermarket. The targeted attacks spread to Zola, Protea Glen and Emdeni. Police have arrested a suspect accused of killed 14-year-old Mahori, along with a number of looters and foreign nationals for possessing three unlicensed firearms.

Johiy Khan, 27, from Bangladesh, has lived in South Africa since 2006 and has run the Blue Container Shop in Emdeni for four years. A bakkie sits outside his store loaded with refrigerators. Everything else was stolen when about 50 locals smashed a whole in the store’s brick wall with tools like pickaxes.

“The problem with South Africa is that it’s that’s too free. Thugs do as they please. They walk into our shops wielding guns and knives,” he says, before suggesting that the store owners will, of course, retaliate. “We don’t come from the same country as Somalis. We come from Bangladesh, but they are looting us all,” Khan finishes before he leaves in the bakkie with his workers.

Photo: An employee of Emdeni Bazaar, South African-owned and untouched during the looting that targeted foreigners, makes a transaction while neighbouring foreign-owned store manages flee the area. (Greg Nicolson)

Down the road, Joseph Mthethwa, 62, manages the Emdeni Bazaar. The South African and his store weren’t attacked. He says it’s because the looters wouldn’t have been able to find “loopholes”. “Leaders must call us all together and we should all work on the causes of this misunderstanding in our community to avoid future occurrences […] Foreigners make us very unhappy. They have brains, they can do things that we can’t, but they are starving us of business.”

According to Mthethwa, local stores, including those foreign-owned, meet regularly to discuss prices. However, he says the foreigners then change their prices without telling the locals and undercut stores owned by South Africans.

Photo: A worker at the Blue Container Store helps remove what wasn’t stolen. Looters smashed a hole the store’s wall, on the left, to gain entry. (Greg Nicolson)

Such are the complexities of foreigners in the townships. It starts with a nyaope addict at the Waka Waka, a panga and a gun, and ends with a boy dead, stores looted and foreigners escaping with bakkies full of anything left. DM