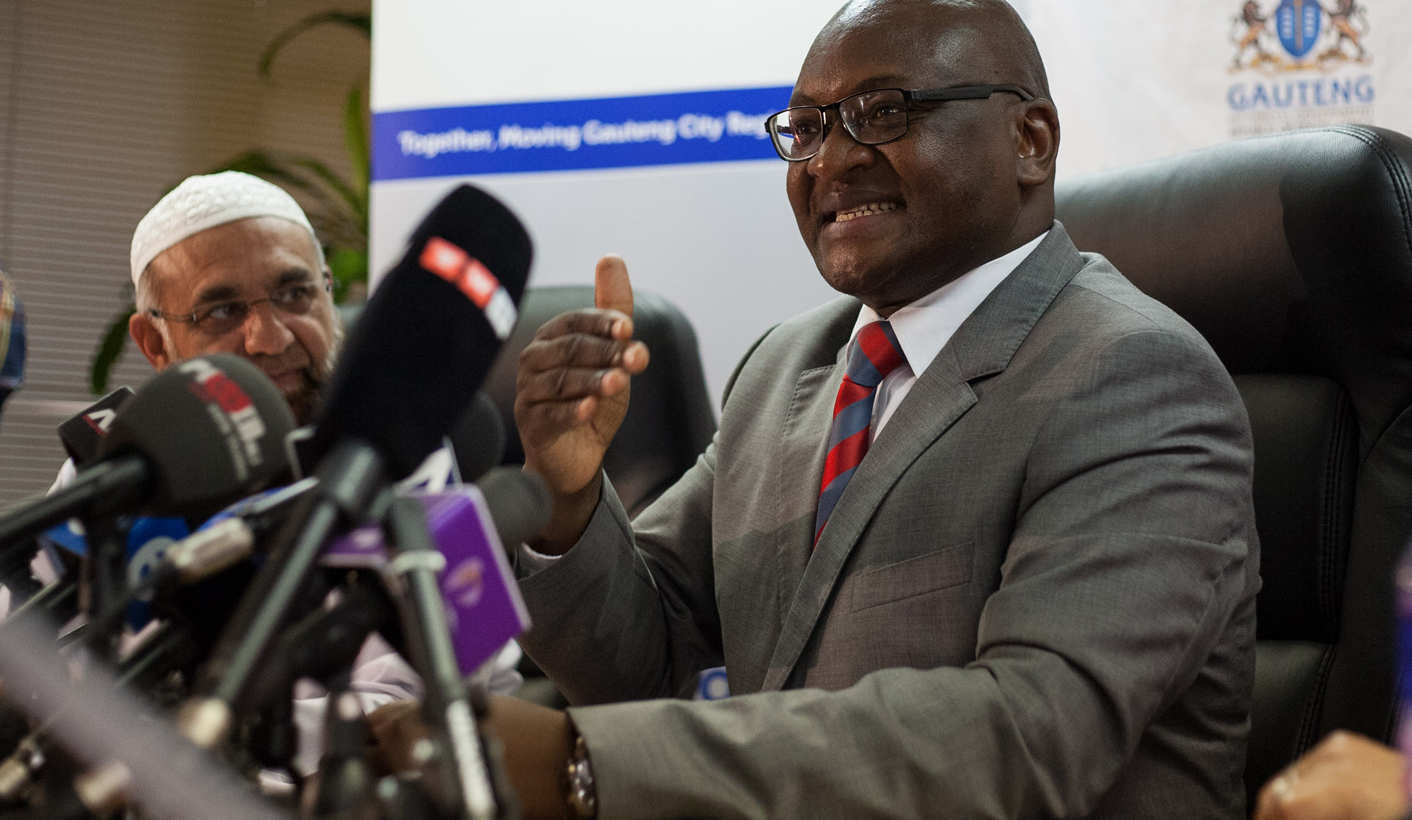 The Gauteng e-tolls review is a text for present and future South Africa. Wade through the detail – there's a lot – and it's thoughtful, about who we are as a country and where we are going. It's about democracy, apartheid, the poor, and realising South Africa's goals. It clearly doesn't limit itself to e-tolls. But you'll still have to pay, something. By GREG NICOLSON.

It started with an election. Last year Gauteng showed it is losing faith in the ANC. When it came to appointing a premier, the party in the province, which is losing faith in President Zuma, forced its hand and David Makhura took the job. He got a hospital pass – a province on the brink of voting the ANC out in the metros in 2016. So Makhura took a key issue, e-tolls, and, with the help of Gauteng ANC, challenged it.

The result is the “Gauteng Freeway Improvement Project and E-tolls Report” from the premier’s advisory panel, released on Thursday. More of a thesis, it’s as grand, opaque and as difficult to understand as e-tolls. Makhura took away two points: for a province still defined by apartheid’s spatial boundaries, the gantries sit like gates to accessing economic opportunities. Read: E-tolls hurt the poor. And, we need continued public engagement and a mixed financing model to pay for the roads.

But the report goes further. Uniquely uniting different sectors of society – poor, rich, black & white – and at the apex of the country’s and the ANC’s future, e-tolls is not an ordinary issue (like unemployment, which the the report’s authors point out should be of more concern, but publicly is not). E-tolls relate to where we live and how we get to work, remind us of the fact that the apartheid government sentenced the majority of its residents to travel long distances for economic opportunities and only allowed a minority to live near where they work.

“The coupling of politics and economics, no matter how remote it may seem, does have profound repercussions in the daily lives of people. Deepening unemployment and poverty have recently caused a lot of people in Gauteng considerable transport-related problems. Based on submissions to the e-tolls panel, it is clear that there is growing awareness of the close link between politics and economics. It is also abundantly clear that there is a sense of urgency about understanding the integrated political context of the Gauteng transport system. The full implications of an interconnected, uncertain, and ambiguous system must be understood. In fact, it’s increasingly obvious that it is extremely difficult to even figure out how to begin to think about the [Gauteng Freeway Improvement Project] and e-tolls,” reads the report.

The e-tolls review panel sums up, symbolically and factually, the state of Gauteng. Things are changing, fast. But it remains the same. Politics are in the wind – the ANC here is fighting to maintain control; the ANC here is fighting for control of the country. Gauteng’s economy is the beacon of transformation and hope across the country; our economy sits in apartheid’s mould. There are questions. No answers. And we try to define a present and future we live, but do not know.

“Disturbingly, in times of crisis, complexity, uncertainty, or faced with potential chaos, there is a tendency to seek certainty, rationality, logic, simplicity, and an analytical framework that will make sense of the world and reduce anxiety,” the report continues. “These frameworks are informed by reductionist and dualistic thinking that drastically reduce the complexity of the situation. Much of the impetus behind the search for a simple transport solution are the emotions evoked by the perception of threat, the need for clarity, the assumption that anything other than a strong stance, a powerful position and reflects weakness and unwillingness to confront the problem. There is a whole sociology and psychology of knowledge at play in socio-economic analysis, which must be carefully examined.”

E-tolls are not the question, but democracy and the post-apartheid state. We know the tolling doesn’t meet international best practice. Sanral and the national department of transport never understood the politics. E-tolls have less of an effect on whites in the suburbs than black people in the townships and are yet another form of exclusion. Public transport is inadequate, inefficient, and uncoordinated. With few people paying tolls, the system has not even reduced congestion.

“Elements of the e-tolls policy should be reviewed as a matter of urgency, and, to avoid further protracted conflict, the process must be transparent, deliberative, and participatory,” reads the report.

“Unravelling the complexities of the e-tolls and their socioeconomic impact, is an enormous challenge. The system is so complex, changes so rapid, and technology playing such a dramatic role in this acceleration, that it is unrealistic to expect things to stay the same very long. Whereas in less complex economies transport systems are arguably relatively simple, predictable, and unambiguous, this is a different transport system. Is there readiness to deal with this? Increasingly, the answer is that there is choice.”

The element of choice, of questioning, has been denied from one side of the e-tolls debate. The public was told to accept the gantries as a given, that these aren’t just some roads in Malawi. Government and Sanral have forced compliance to the extent that police watch on-ramps searching cars for e-tags in order to enforce what this report shows is a flawed system.

The e-tolls review panel seems to accept these problems. Its remedy: democracy. “Predictably, the implications of this analysis is that in due course, if democratic principles are followed in transport policy processes, the democratic distemper will moderate. Prescriptively, the implication is that these developments ought to take place in order to restore the balance between vitality, law, and justice. As AI Smith once remarked, ‘The only cure for the evils of democracy is more democracy’. The analysis suggests that applying that cure at the present time could well be what the crisis requires. Indeed, some of the problems of service delivery today stem partly from the failure of democracy. Democracy is the best way of constituting legitimate authority. The claims of expertise, seniority, power, and technical experience may not override the claims of democracy as a way of constituting authority.”

The panel recommends a hybrid funding model more equitable to low and middle-income users, more simple and efficient. This would include funding from the provincial fiscus, reduced e-tolls, a ring-fenced fuel levy and fees on vehicle registrations, increasing fees for tyres and recovery of funds from the construction industry involved in the project.

“The problems of South African society, with special reference to the e-tolls, are difficult to solve but they are not intractable, and South African society, whatever its weaknesses, does still possess a lot of resources that can be mobilised when wanted. It has already shown, during the service delivery crises, considerable resilience and a capacity to adapt, to adjust, and to be innovative. Right now it still manages to maintain democratic stability against very difficult odds,” reads the report.

If national government buckles, some of these proposed changes could be implemented, but even then it will take time. Yet the e-tolls saga is bigger than how much you’ll save or spend. That’s what the report recognised. It’s about the present and future of our democracy, who leads the ANC and whether the party can continue to control Gauteng. All wrapped up in an innocuous issue that has somehow managed to touch all sectors of society, it’s about whether the province can transform the spatial reality of access and denial. DM

Photo: Premier David Makhura at the release of the Gauteng e-tolls report on Thursday. (Greg Nicolson)