Playing the African Statesman, with teeth: Is President Zuma’s new fighting force such a good idea? 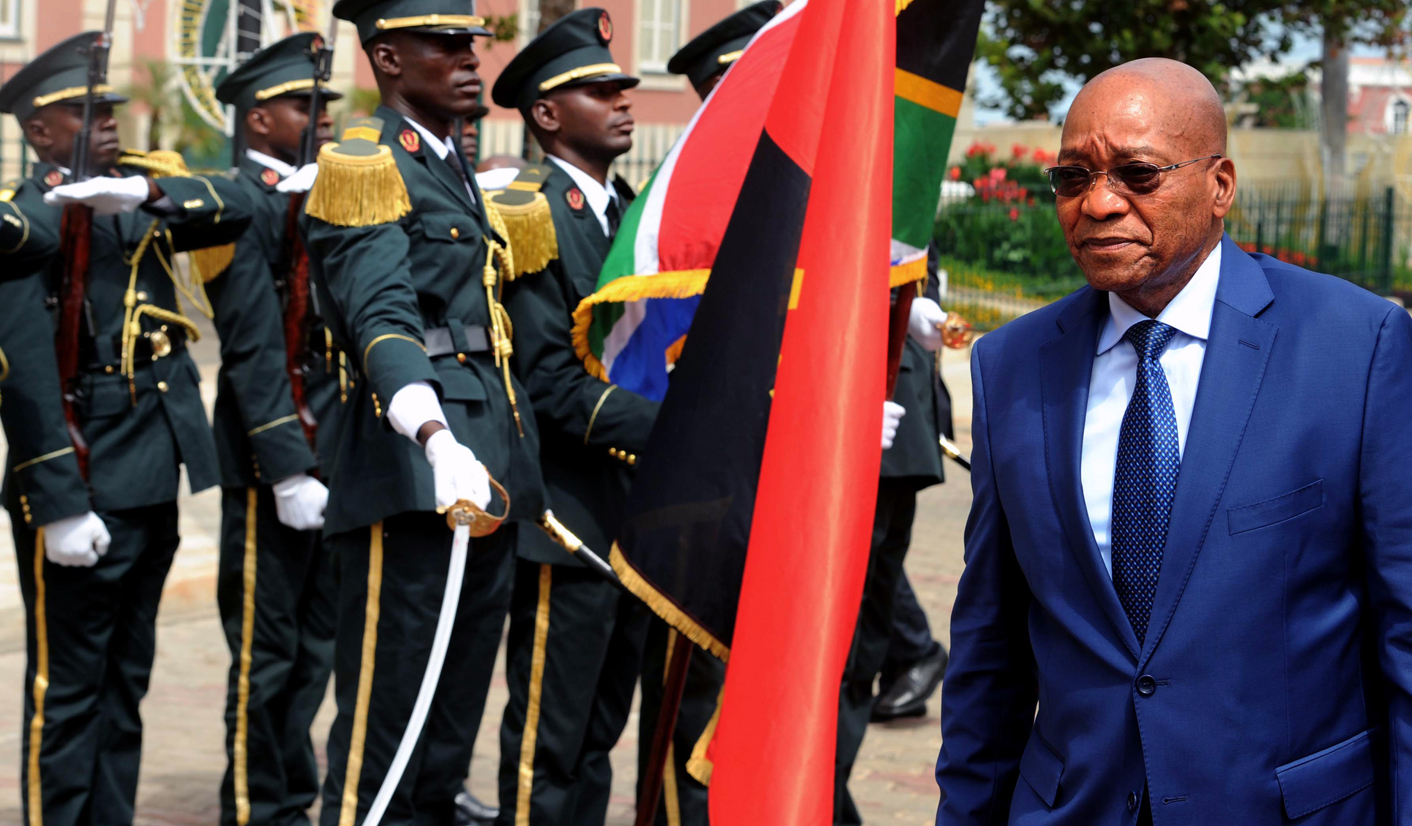 Jacob Zuma is a president in search of a legacy – at least one that’s not centred around corruption charges, maladministration or palatial homesteads. He thinks he has found a worthy project, in the form of a new continental military intervention force intended as a powerful African solution to African problems. Not everyone is so sure. By SIMON ALLISON.

The African Capacity for Immediate Response to Crises (ACIRC), expected to be deployed operationally sometime this year, is President Jacob Zuma’s baby. The president personally tabled it at the 21st African Union Summit in May 2013, and lobbied his counterparts to ensure the motion passed. His office, meanwhile, has been encouraging the South African National Defence Force (SANDF) to speed up the establishment and operationalisation of the force.

From his perspective, it seems like a good idea. “The ACIRC is an African-owned initiative for military intervention as and when the need arises…whose purpose is to rapidly respond to crisis situations on the African continent,” explained South Africa’s Department of International Relations and Cooperation, in response to a parliamentary question. In theory, at any one time it would consist of about 1,500 soldiers on standby, drawn from various volunteer countries, and be able to deploy at speed to wherever it was needed.

Africa, undeniably, has enough crisis situations to keep such a force busy. The plan, according to the Institute for Security Studies’ Andre Roux, is to stop or prevent emerging genocide, crimes against humanity, atrocities or war crimes by armed rebel forces. Recent situations to which the force could potentially have been deployed include South Sudan, the Central African Republic, and Mali. In fact, the genesis of ACIRC was in response to Africa’s perceived failure to intervene in Mali.

It is also intended as an African solution to African problems, and to stop others – in particular France – from getting too involved. Military intervention in Africa has often been a largely foreign affair – think of the United Nations missions in Cote D’Ivoire, Democratic Republic of Congo and South Sudan, to name but a few, or the recent French interventions in Central African Republic and Mali. The African Capacity Force would, for the first time, give Africa a rapid response force that could deal with these types of problems itself, and several other countries have pledged support, including Algeria, Angola, Burkina Faso, Chad, Egypt, Senegal, Uganda, Sudan, Tanzania, Niger, Benin, Cameroon and Rwanda.

For South Africa, the force has more obvious diplomatic benefits. Even though authorisation for deployment must come from the African Union itself, as its initiator and currently its major benefactor, South Africa would have a big say in when and how the force is used, providing it with a potent political weapon. This is particularly important in the context of South Africa’s diplomatic rivalry with Nigeria, and it’s therefore no surprise that Nigeria has expressed opposition to Zuma’s plan.

So far, so good for President Zuma. To him, the African Capacity Force represents a chance to play the African statesman, with teeth, as well as keeping South Africa at the forefront of continental security.

Nigeria, like many others, argues that a similar force already exists. The African Standby Force (ASF) is arguably supposed to be the fulfilment of the long-held dream of a pan-African military – espoused by both Kwame Nkrumah, with his proposed African High Command, and Muammar Gaddafi and his African Army – although with a far greater emphasis on peacekeeping. The mandate of the Rapid Deployment Capacity within the ASF mirrors that of the ACIRC, and its resources will dwarf ACIRC when (if) it becomes fully operational.

One key difference is that whereas ACIRC reports directly to the African Union, the ASF would answers to regional structures. It is structured on regional lines, with each region contributing a specified number of personnel and each region taking six-month stints to be on standby. This spreads the cost and political advantages of managing such a force. However, this regionalism has also been its downfall: nearly 12 years since it was formalised, only three regions – the Southern African Development Community (SADC), The Economic Community of West African States (ECOWAS) and the East African Community (EAC) – have made any progress in meeting their obligations. The lack of progress means the African Standby Force remains dormant. It certainly won’t be responding to crises anytime soon.

In this context, Zuma’s African Capacity Force is intended as an interim measure; a stopgap to plug the void. It will be smaller and nimbler, and it won’t be beholden to sluggish regional progress. Nonetheless, it seems odd to plough resources into this new force, rather than try to fix what already exists – why reinvent the wheel?

A much more appropriate solution may have been to call for the updating of the Rapid Deployment Capacity already built into the ASF. “The ASF has near-unanimous support from within the AU and has the formal backing of the EU for funding and other assistance. ACIRC has none of this; no pre-existing structures to rely on, no agreements amongst its partner nations on how it will be funded, little clarity on operational command and control and too vague a mandate for when and where it could or should be used,” explains Darren Olivier, senior correspondent for the African Defence Review.

“This is the most critical phase [of establishing the ASF], when attention and funding are needed most to overcome the final hurdles, but instead the establishment of ACIRC has sucked all energy from the ASF…I believe that ACIRC is a mistake that’ll set back, not advance, the continent’s ambitions of being able to handle its own security. It’s an attempt to hastily emulate the military peacekeeping capacity of far richer and better-resourced countries and organisations without having first created the necessary foundations,” concluded Olivier.

ACIRC also raises questions about what will become of South Africa’s other peacekeeping efforts, most particularly in the eastern DRC where SANDF has deployed more than a thousand troops as part of the United Nations’ Force Intervention Brigade. Already overstretched in terms of personnel, equipment and funding, can SANDF really afford ACIRC, to which it has pledged half a brigade’s worth of troops and equipment?

“The big challenge and this is the big irony is that SA which is championing ACIRC doesn’t really have the capability to support ACIRC… There’s a disjuncture between the capabilities that SA has and its ambition,” said Jakkie Cilliers, executive director of the Institute for Security Studies.

President Zuma was hoping that the African Capacity force would be a quick, easy response to Africa’s most pressing emergencies – and a much-needed credit to his reputation. Unfortunately, it’s not that easy. In pushing for a new, untested military force, he instead risks derailing what progress the continent has made in establishing a continental framework for military intervention, and may compromise ongoing peacekeeping efforts in the process. If, that is, South Africa can even afford it. DM