The plight of Zim’s 36 baby elephants 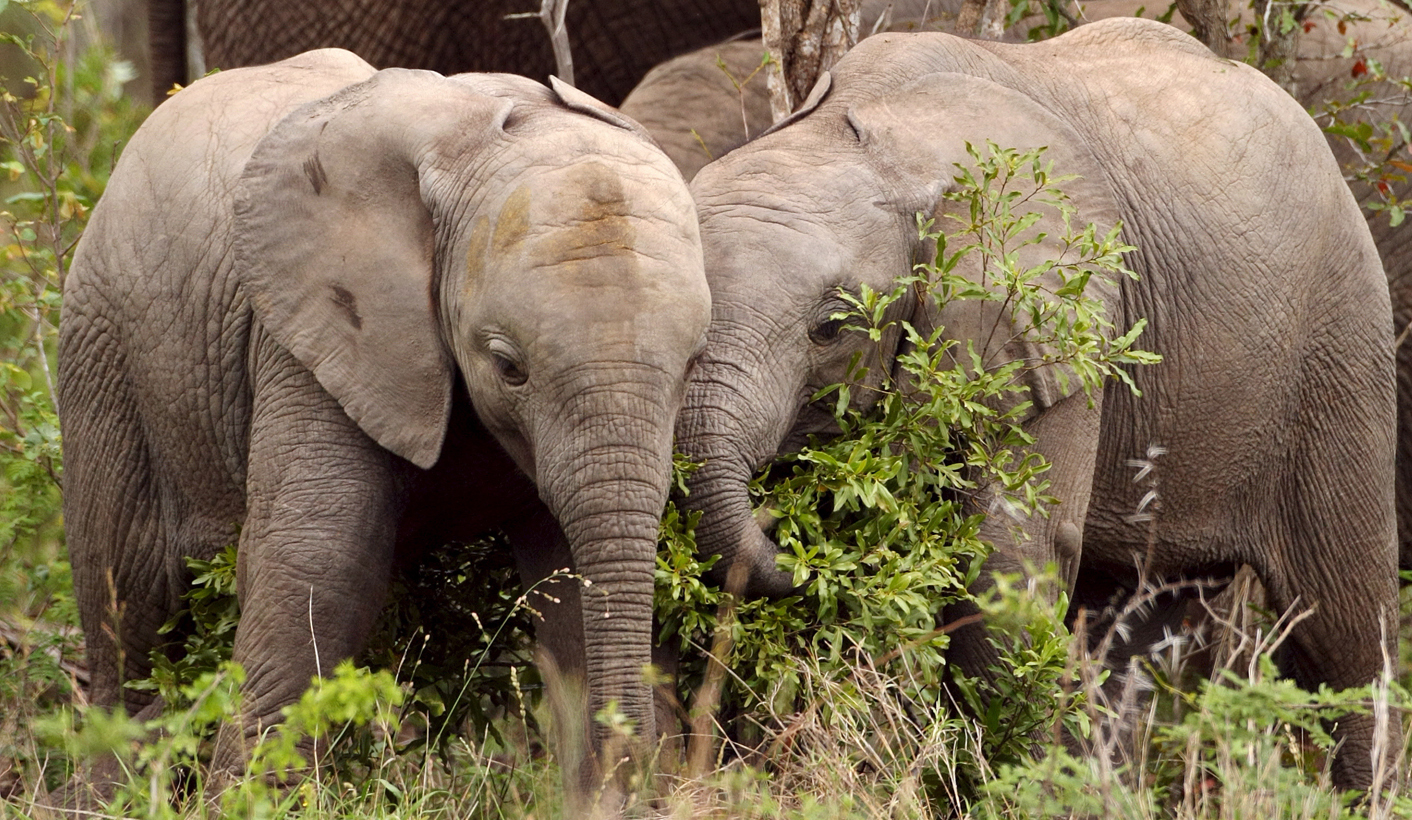 Archive Photo: Elephants in rural areas of Mozambique have been fitted with tracking collars in a research project teagle-elephants-subbed.jpg

Late last year, dozens of baby elephants in the Hwange Elephant Park were forcibly removed from their families and prepared for export. Now, Zimbabwe has confirmed its intention to ship 60 elephant calves off to undisclosed destinations in France, the United Emirates and China. While Zimbabwe defends the move with claims of over-population, conservationists condemn the trade as both unethical and unwise in the face of the poaching crisis. Killed for teeth and banished for money, Zimbabwe's elephants are under siege. By ANDREA TEAGLE.

The families were scattered by gunshots. They made for easy targets from above: great, grey figures stark against the golden grass. As the animals began to stampede, their terrified babies, unable to keep up, were roped together and taken away. Their capture tore apart families that in the wild could be separated only by death. Within weeks, one of the elephants has already died and its meat distributed for food. The remaining 35 young calves (plus an additional one to replace the deceased) are being held captive in a boma, along with several other animals, close to the main camp of Hwange Elephant Park. Their situation is only about to get worse.

On Monday, Zimbabwean authorities, who up until this time have been vague about the transaction, confirmed that 60 baby elephants are due to be exported to the United Arab Emirates (UAE) , France and China with the majority likely being shipped off to Chinese zoos and circuses. If they survive, conservationists warn, it will be to live out their lives in solitary confinement as show animals or zoo attractions. In the face of international outcry, the government has remained moot about the scheduled date of the exportation. Meanwhile, Johnny Rodrigues, who heads up the Zimbabwe Conservation Task Force (ZTCF), has launched a petition to stop the sale from proceeding.

“You can’t take these animals out of Africa and send them to these inhumane areas where they’ve got no good track records,” says Rodrigues, adding, “It’s cruel what they are doing. “

As well as opposing this particular export (viewed as particularly inhumane due to the vulnerability of the calves and the poor living conditions that likely await them), international outcry has also raised broader concerns about whether trade should be allowed at all given the rampant poaching that persists across the continent.

The Zimbabwean government has characteristically shrugged off criticism, with Tourism Minister Walter Mzembi on Friday, stating, “Our habitat is not designed to carry too many elephants that are in its environment. We have an over-population of elephants.”

However, Zimbabwe’s elephant count is a long shot away from that of conservationists. While Mzembi referred to the need to reduce its 80,000-strong elephant population, a recent aerial survey indicated that there are in fact only about 58,000 elephants left in the country. The discrepancies in numbers extend to the Hwange National Park, where the first batch of babies await exportation.

“We are sure there are 25,000 elephants in the Hwange elephant Park,” Colin Gillies, of the Zimbabwe Wildlife and Environment Association, told the Sunday Argus, “while the National Parks believe there are 40,000.”

Even if over-population were a consideration, the export of 60 baby elephants would do little to address the issue. What it would do is bring in a tidy sum of R24 million (with each elephant going for around R400,000 each), ostensibly to protect wildlife.

Unfortunately, Zimbabwe’s flimsy defences are armoured in the fact that exporting elephants is not, per se, illegal. Under the Convention on International Trade in Endangered Species of Wild Fauna and Flora (CITES), regulated trade in Zimbabwean (along with South African and Batswana) elephants is permissible, as long as it is properly regulated. CITES ensures that all species are categorised according to the size and robustness of the population, and trade is limited accordingly. At least, that’s the idea. The problem is, how a species is ultimately classified is determined by a two-thirds majority vote. And votes tend to bend toward influence.

In 1997, CITES members voted to downgrade the Zimbabwean elephant from Appendix I (a total ban on trade) to Appendix II, in order to facilitate a once-off legal sale of stockpiled ivory. Zimbabwe, as well as Botswana, Namibia and South Africa, argued that the reclassification was appropriate given healthy current elephant populations, despite the ever-present risk of a new upsurge in poaching. In 2014 the US Fish and Wildlife Service banned the importation of elephant trophies from Zimbabwe citing concerns over conservation of elephants there.

In 2013 alone, Africa lost over 20,000 elephants to poaching, which has been at peak levels since 2007. Even where numbers still buoy well above critical levels, experience has shown us that poaching can cause devastating population declines over short periods. According to a recent study published in Proceedings of the National Academy of Sciences, the elephant population of central Africa, hardest-hit by poaching, plummeted by 64% in a single decade.

In the wake of the Hwange baby elephant saga, the Zimbabwe Conservation Task Force is planning to approach CITES to have the elephants moved back into Appendix I, and an unconditional ban not only on trade of ivory (charmingly classified under ‘elephant parts), but also live elephants.

How much difference would this actually make? Although CITES has come under criticism for its lack of policing power, empirical evidence suggests that Appendix I categorisation, at least, does have an impact on conservation. Indeed, the classification of the African elephant to Appendix I in a 1989 CITES meeting was followed by such a significant and sustained recovery in elephant numbers that, until very recently, elephant conservation was hailed as one of CITES’ greatest successes.

Currently, elephant trade is still limited, in theory, to destinations that are ‘acceptable and appropriate’. However, interpretation and fulfilment of this criteria is left to the discretion of the trading parties, which understandably does not fill conservationists with confidence when the exporting country is riddled with corruption and the importing country is also the heart of ivory demand. In addition to addressing vague wording, another proposal for improving CITES’ regulatory mechanisms is the electronification of export permits, already underway in some parts of the world. This would make it easier for CITES to track ‘regulated’ trade, and more difficult for countries like China and Zimbabwe to engage in transactions that result in wildlife ending up living in inhumane conditions or slaughtered for their tusks.

However, the first priority for international conservation groups remains to have the 36 baby elephants returned to their families, and to ensure that no more are captured. It is not a hopeless situation. In 2012, with the help of a global outcry, ZCTF managed to get five Zimbabwean elephants marked for export returned to the wild. (Of the four others that it could not save from export to China, only one remains alive today.) International pressure can help to ensure transparency and fair play. Indeed, without it CITES — like the mothers of the Hwange elephant calves — has little more power than the innocents it seeks to protect. DM