Paris marches against hatred and intolerance 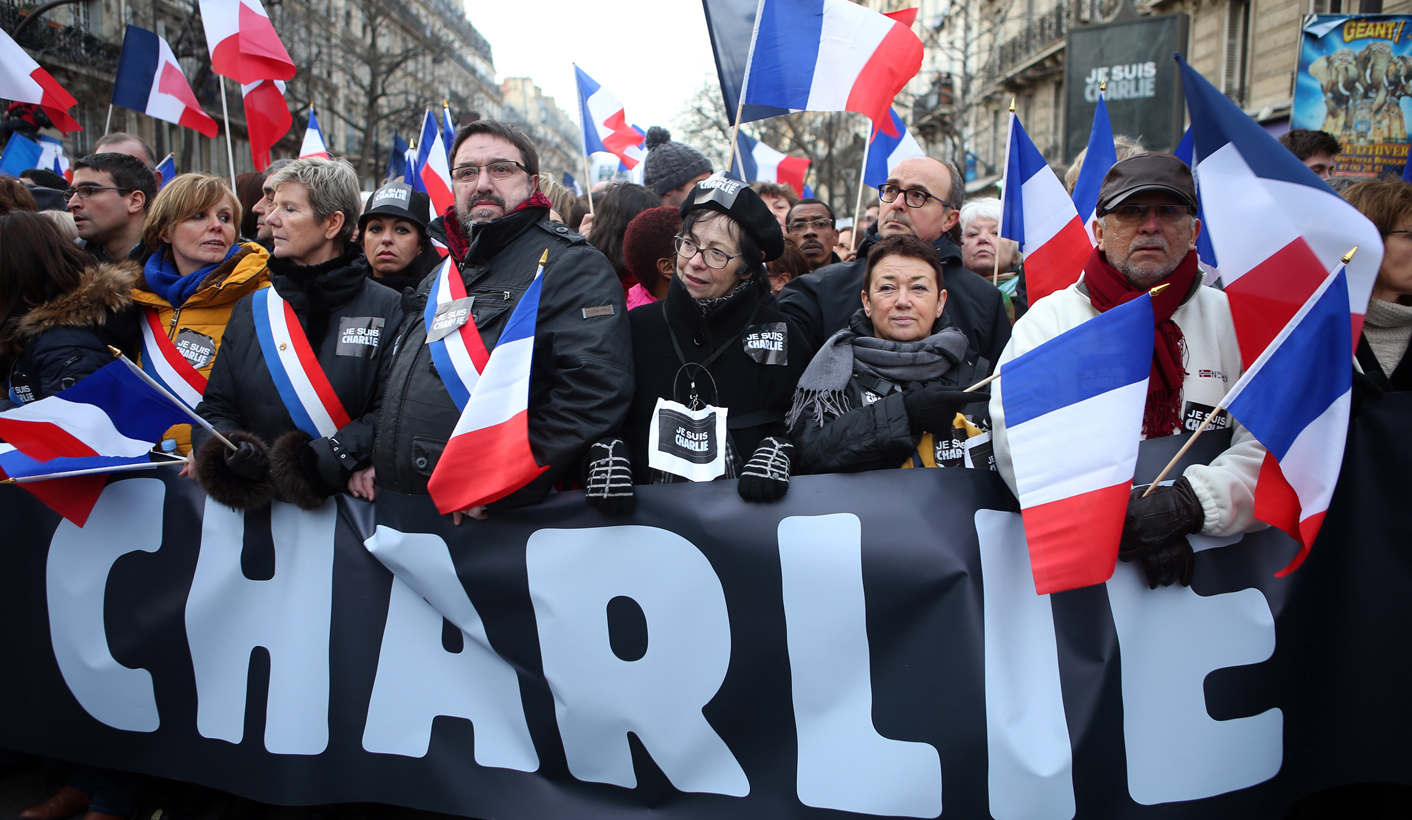 They came in their millions to march in Paris and beyond to prove that they had not been cowed by the acts of a small band of murderous thugs acting in the name of religion. J. BROOKS SPECTOR contemplates the initial impact of this virtually unprecedented event.

It was a horrific week that at first astonished and appalled France. It started with the slayings of journalists, police and bystanders at the offices of satire magazine Charlie Hebdo and then yet others taken hostage in a food store selling kosher products by the now-fleeing killers. As millions saw them, these events became a kind of body blow to the very ideas of freedom of speech and expression and the nature of modern civilisation. But it ended in an extraordinary note of triumph where millions of people rallied in Paris and other cities, delivering a resounding, thunderous answer to these earlier tragedies.

In the quickly convened rally in Paris that started in mid-afternoon Sunday, long before the official start time, a vast crowd had already gathered at the Place de la Nation (the end point) and the Place de la République (the ostensible starting point). By the time French President François Hollande (and other French politicians, but not Marine Le Pen of the National Front) and over forty other world leaders had walked from the one spot to the other, following their earlier assembly at the Élysée Palace and subsequent movement by bus to the starting point for their march, estimates were that well over a million people had swelled into a vast crowd. By all accounts, the crowd was well mannered, enthusiastic, and even, in special way, exuberant, exultant over the achievement of the obvious solidarity of this march. And the crowd was clearly reluctant to end its participation in this moment of largely impromptu national cohesion, with many of them staying on well past dark. There were also parallel rallies in other French cities and in other European capitals as well, such as London, Dublin, Berlin and Vienna.

Astonishingly, there were no speeches in this massive rally. None. Instead, the multitudes carried French and other national flags, banners expressing solidarity with the victims and the right to free expression, and even large models of pencils and pens, as if to say, the power of the word remains stronger than any intention of killers. Signs on display throughout the vast crowd included thousands of those now-ubiquitous signs reading “Je suis Charlie”, “Je suis un Juif”, and “Je suis Ahmed” (in memory of the Muslim policeman, Ahmed Merabet, who was killed by the slayers in their attack on the magazine, Charlie Hedbo), among dozens of other variations.

Marching together in the international leaders contingent, and flanking President Hollande, were Israeli Prime Minister Binyamin Netanyahu and Palestinian Authority Mahmoud Abbas, as well as King Abdullah of Jordan, German Chancellor Angela Merkel, British Prime Minister David Cameron, Russian Foreign Minister Sergey Lavrov, and Turkish Prime Minister Ahmet Davutoglu, among dozens of others. (The ironies of some leaders marching for freedom of expression in France while their own countries’ governments engage in restrictions and assaults on media freedom went largely uncommented upon, lest this disturb the unique solidarity of the moment.) US Attorney General Eric Holder, already in Paris for another meeting, hastily received the nod as the official American representative for the march, according to the US Embassy in South Africa. And South Africa was apparently represented by a senior figure at its embassy in Paris.

At the front of the march, Dalil Boubakeur, rector of the Great Mosque of Paris and president of the French Council of the Muslim Faith, together with other religious leaders, joined with all of those secular world leaders for the walk in a demonstration of grand gesture of solidarity as well. This was clearly meant as a strong message to the world that the killers assuredly did not speak for all of France’s Muslim community, the largest in Europe, let alone for the global Islamic community writ large.

Some people did detect a slightly sour taste contained in comments from Prime Minister Netanyahu addressed to French Jews (a community that has, admittedly, felt itself increasingly under stress and the object of threats, even before this latest incident) to the effect that if things should ever get too hot for them in France, they could emigrate to Israel where they would always find a welcoming homeland. However, President Hollande and Netanyahu also attended together a special service at Paris’ Grand Synagogue, designed to serve as a measure of solidarity with France’s Jewish population and to dispel fears.

But, even as the rallies across France and beyond began to wind down, the inevitable questions about what the rallies really meant and what comes next – going forward from Monday – are already being asked. For one thing, according to commentators who offered opinions to the international broadcasters covering this massive rally in Paris, the French nation will be seizing on this event to begin a process of contemplating much more seriously just how inclusive their society has become. This will be especially important as it confronts the fact that some seven million of its inhabitants are Muslim, even if not all of them are devout, and especially if the vast majority of them are not supporters of the killers. In tandem with that, French society will be grappling with the kind of politics Marine Le Pen’s National Front (the country’s third largest political party), largely seen by many as holding an anti-foreigner, anti-Islamic ethos, will continue to espouse – and just how it will affect French politics, going into the future.

Further, the French – if many of their commentariat are to be believed – are starting to grapple with the related question of precisely how to integrate that country’s large Muslim community (and other largely marginalised groups) into French society in a way that does not, simultaneously, do damage to the widely appreciated values of a largely secular nation. Many see France’s struggle over a prohibition of wearing the hijab by many as indicative of just that still-unresolved debate.

Moreover, the massive march and rally on Sunday can also be read as a severe rebuke to those who seem to be apologists for fundamentalist terror campaigns. To some, for example, such as Bernard-Henri Lévy, one of France’s premier public intellectuals, in his remarks on one of the international broadcasting networks, the Paris rally represents a powerful statement to “Islamo-fascism” that, in future, their attacks would no longer be tolerated by the rest of the world.

The problem, of course, is how these grand ideals can be translated into tangible, effective actions. How, specifically, does this march translate into a real template for building a greater sense of French social cohesion? How does the march become a jumping off point for a broad recognition by French citizens that most Muslim inhabitants feel marginalised, without necessarily belonging to a radical, violent cell? And perhaps most important of all, for both the French and the wider world, how will the global community respond more forcibly to the very real threat of fundamentalist-inspired terrorism – especially since such actions carried out by only a few people are, nevertheless, disproportionately able to destabilise an entire nation through sudden, unexpected acts of public violence.

In the background of all of this, it also seems inevitable there will be some serious bureaucratic infighting within the French government and – perhaps too – involving some sharp, intensive discussions with France’s allies – over how it was that at least one of the killers was on watch lists and no-fly lists – and yet still managed to slip back into France to do his dirty work after time apparently spent with ISIS in the Middle East. The French have apparently confirmed that while they do pay close attention to many potential malefactors, nevertheless, they have been unable to keep up with all of them with the results the world has now seen.

Confronting these questions, in turn, will force some real, and difficult, discussions – with some serious human rights repercussions – about just how far a democratic society can go in protecting itself, without actually abandoning the very principles and values it avers that it stands for. The answers to questions like this will provide some hard lessons for many other nations as well, as they, too, grapple with the kind of homegrown terror activists France has just encountered within the past week. DM

Photo: People hold a large banner that reads ‘Charlie’ and wave the national flag during a mass demonstration in solidarity with the victims of the terrorist attacks and to show unity, in Paris, France, 11 January 2015. EPA/MAYA VIDON-WHITE