Ministry of refuge is gone, finito 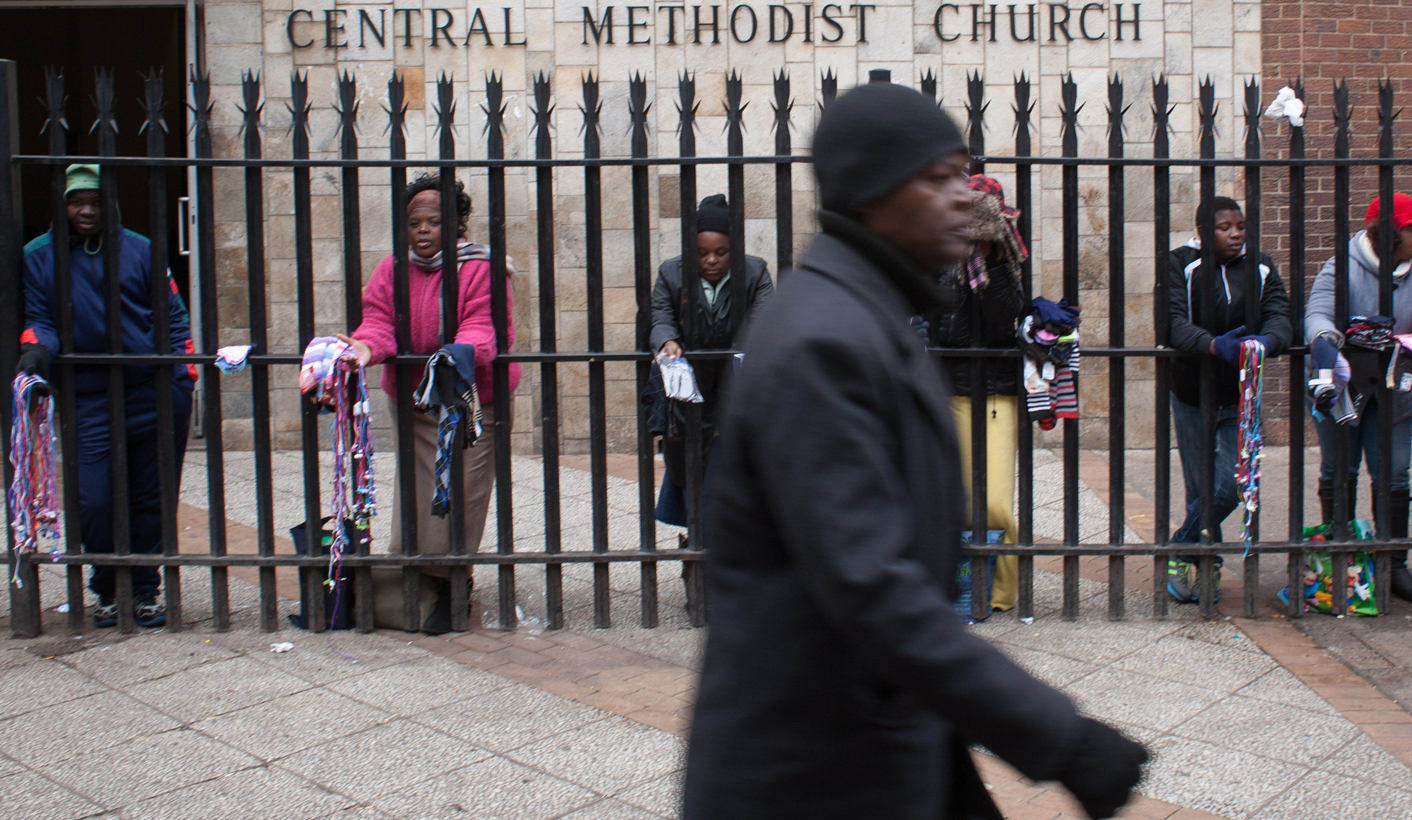 For a decade, Johannesburg Central Methodist Church has been well known by its residents – the marginalised, particularly migrants from Zimbabwe, seeking refuge. It has been seen as a crime-ridden slum with health risks as well a sanctuary for those in need, fleeing violence and looking for a better life. As the church closes its doors to residents, GREG NICOLSON looks at what Central represents and what's next.

Through the foyer, past a man sweeping away rubbish and another trailing with a mop, Donnel climbs a flight of stairs into darkness. On the first landing, cigarette embers outline a figure under a blanket. Donnel, a 25-year-old from Zimbabwe, stands on the next landing where he slept for part of 2014, pressed against other bodies.

“You have to be like a soldier, a man,” he says. Up to 1,000 people were staying in the church last year. “Because the situation here is much better than Zimbabwe.”

For over 10 years, those on the margins of society, particularly foreign migrants, have arrived at the Johannesburg Central Methodist Church seeking refuge. Some are looking for opportunities in South Africa, others fleeing political turmoil. Some face local issues, like the many who arrived on Pritchard Street during the 2008 xenophobic violence. Thousands have slept in the church, its stairwells, various rooms, pews and even surrounding streets, making Central a symbol of democratic South Africa’s challenges and adding to Johannesburg’s ever-evolving identity as a city of migration.

That chapter in the church’s history has come to an end. Church leader Bishop Paul Verryn, the force behind accommodating anyone in need, is no longer in charge. When he announced his retirement last year, leadership of the Methodist Church took the opportunity to join those critical of the poor living conditions and gave residents until 31 December to move out.

Young men sit on Small St flipping through Christa Kuljian’s book on the church, Sanctuary: How an Inner-City Church Spilled onto a Sidewalk. “I was there,” says Lee looking at pictures of the January 2008 police raid when hundreds were arrested. A few months later, displaced foreigners flocked to Central when xenophobic violence erupted.

“It was full here, Small Street, inside, everywhere.” Lee, who fled Harare for Johannesburg in 2006 when he felt he was in danger for being active in MDC Youth, estimates there were 2 000 people staying at the church and on the footpaths. He points down the road to the High Court and to the traffic lights on Jeppe Street; everywhere there were people sleeping.

The number of residents has since declined and both Lee and Donnel moved last year after they received notice they would have to leave. They return now to work – doing hair – or see friends. Between 70 and 300 people still live at Central Methodist, they estimate. “Come at night, then you can judge,” says Donnel.

Allowing people to stay in the inner-city church has posed a question that has been debated for years: if people have fled difficult, even horrendous, circumstances, are destitute and in need of somewhere to stay, should they be accommodated even if the living conditions are poor? Even Verryn acknowledges the church wasn’t built as a shelter.

Asked about the toilets, Lee says often they weren’t working and people would sleep by them. In 2006 there was a murder in the church. The media said violence, drunkenness, rape and sewerage problems were the norm. Outstanding utility bills escalated and according to reports the electricity bill stands at R2 million. When I first visited the building in 2012, I found the overcrowding shocking. That was, however, because it was a functioning church. In fact, it reflected its surroundings, featuring the poverty and lack of services of many inner-city buildings, but with more order and greater sense of safety.

In 2009, 35 civil society groups including Cosatu, Amnesty International, Section27 and the SA Council of Churches released a statement saying the living situation at Central was not sustainable. It cited health problems due to overcrowding and said children were at risk. “We call for a solution that respects everybody’s dignity and offers some permanent alternative of accommodation and care,” said the organisations. They supported Verryn’s call for government to intervene and meet the needs of refugees. The state, however, has been hostile.

Verryn has always called on the government to do more, but it hasn’t, and he maintains that it’s better to open the church’s doors, and poor conditions, than let people live on the street. Mary Metcalfe, who is a friend of Verryn’s and was on the scene when the police raided in 2008, says the bishop has little material want. In his Soweto house he accommodates those in need and his bedroom is his only private space. He recognises the poverty in Johannesburg and cannot force people to live on the streets.

“The lives of the poor are not stories of sanitised, pure lives of noble poverty,” says Metcalfe, reflecting on the problems Central has faced. Simply, people get angry, have sex, fight and drink regardless of whether they’re poor or rich. As an overcrowded place of refuge trying to offer a stepping stone to society, that’s what the church has been dealing with.

Verryn describes the community as “very nuanced and complex”. “It has come to symbolise a place to which marginalised people can come and perhaps we can try to open doors for them to integrate into society more effectively,” he says. It’s never been a final destination and residents were required to study and attend church, providing opportunity to improve skills, to find employment and to receive trauma counselling.

“The bishop did his best during his time at the church but now he is retiring he no longer has the authority,” says Lee. While he and many others have found alternative accommodation, no one knows where those without an income will go. Verryn offered an alternative in Soweto, but says there’s been little interest due to the belief that economic opportunities are in the city. Others are scared of xenophobia. Verryn is committed to helping those in need, but is still looking for options.

Otias Hamandishe, 34, lived in Central for eight years before a church initiative to support his hair business allowed him to move. He describes the problems at the church as due to the diverse characters, some wanting to cause destruction, others hoping to build. “But it needs renovation,” he says, standing at the iron fence which from Thursday will be gated and guarded.

Reverend Ndumiso Ngcobo has taken over the church, tasked with returning it to a state of worship rather than refuge. Metcalfe wonders whether it can be transformed after being so entrenched in city issues and the plight of the poor. “What is its potential constituency of the church?” she asks. While the more conservative Methodist members opposed to using the church as a refuge have finally won out, will they support it?

“It’s in their hands,” says Verryn on Central’s future.

On Wednesday night he sits in front of the pulpit facing about 100 congregates, residents facing eviction. Some of the pews are missing or broken. A two-year-old running between the aisles breaks the silence. The carpet is ripped and the air smells of sweat. “I don’t think you’ve been formally introduced to your new superintendent,” Verryn finally announces.

Central’s residents plead for more time and help to find alternative accommodation. After being given confidence, they’re being treated like rubbish, says one. Another says the women are considering prostitution. Many say they will be homeless. Those remaining are those that don’t have the resources to move. Responding to talk about the run-down building, one person says, “If only you can know the brokenness of people in this place.”

Their pleas are likely to fall on deaf ears. While Ngcobo will take the information to his bosses, he is under orders from the Methodist leadership and has to report on Thursday as to why he even attended the meeting. There have been comments from that leadership “that would make us fairly cynical about their response”, says Verryn.

Ngcobo, who says people sleeping on stairs keep him up at night, wants to help the residents voluntarily repatriate. “The ministry of refuge is gone. It doesn’t exist. Finito,” he told the church. DM