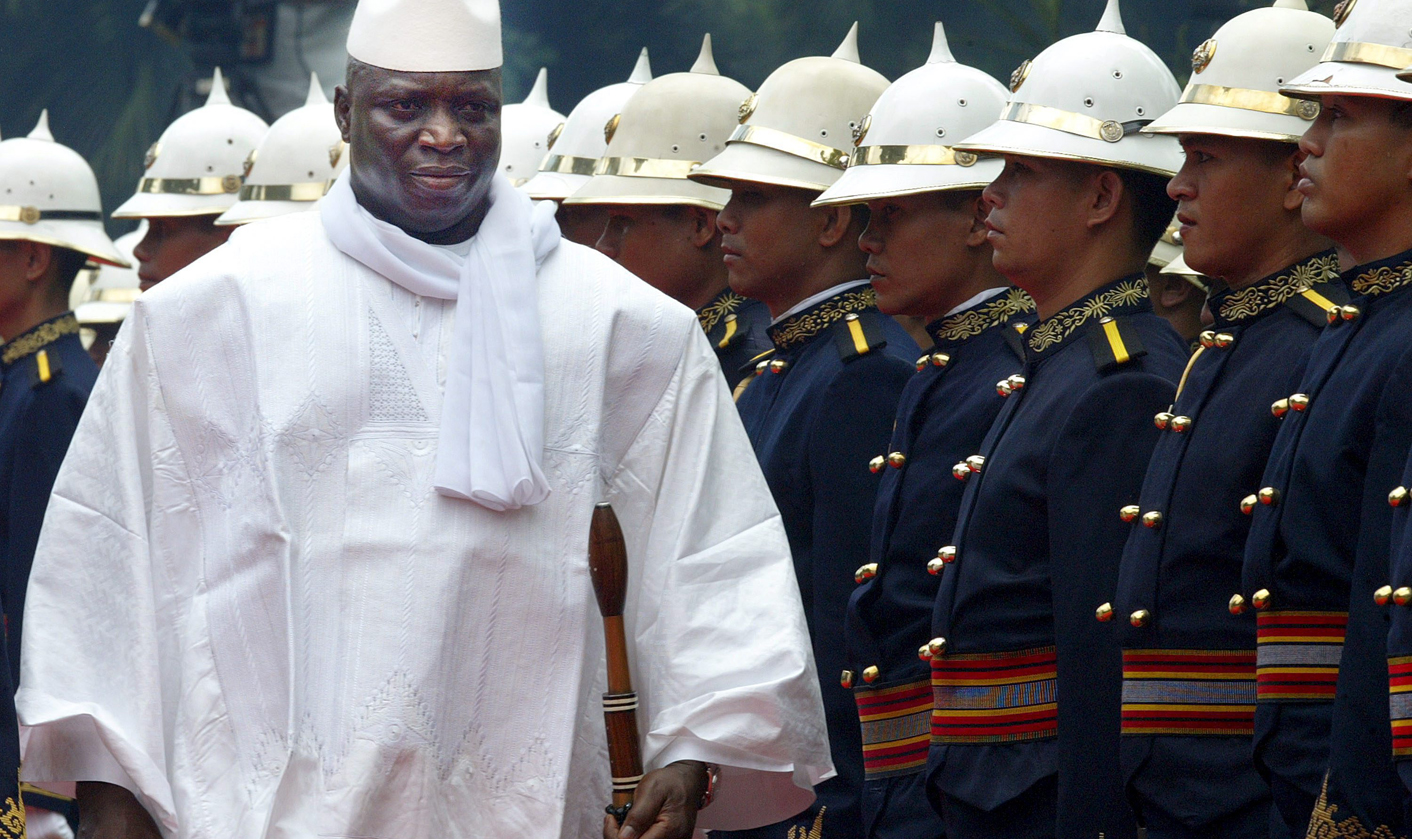 The aftermath of the failed coup in the Gambia has reached the USA, where two alleged plotters are being put on trial by US authorities. This is the best case scenario for Gambia’s president-for-life Yahya Jammeh, who survives with his power reinforced by a de facto American endorsement. By SIMON ALLISON.

On Monday, US authorities formally charged two men in connection with a cack-handed plot to overthrow the president of Gambia. Cherno Njie, 57, a property developer from Austin, Texas, is alleged to have instigated and funded the plot. Papa Faal, 46, a US military veteran, was going to help Njie execute it, along with several other recruits.

The plot failed. Miserably. On December 30, with President Yahyeh Jammeh conveniently out of the country, around a dozen gunmen – including Faal and Njie – attacked State House, hoping to overwhelm the presidential guard with the M4 semi-automatic rifles that they had smuggled into the country. Njie also believed that members of the Gambian military, fed up with Jammeh’s two decades of autocratic rule, would support their cause. They didn’t, and the plotters were outgunned and outmanned, taking heavy casualties – including several deaths – before abandoning the attempt.

Faal and Njie managed to escape. Faal sought refuge at the US embassy in neighbouring Senegal, and was returned to America. Njie’s route is less clear, but he also ended up back home in America – far away from Jammeh’s murderous vengeance, perhaps, but still in trouble. And no, murderous vengeance is not hyperbole: “…there is only one gone I will be happy about. That is, if they are gone to hell, yes, but anywhere else we are going to get them…it is going to be an eye for an eye,” Jammeh said of the coup leaders.

US prosecutors have opted to try the pair, both US citizens, under a little used piece of legislation called the Neutrality Act, which expressly forbids US citizens from participating in private military operations abroad. It was last used in 2007 to indict Vang Pao, a US citizen accused of plotting to overthrow the government of Laos (after intense public pressure, these charges were later dropped). The maximum sentence under this legislation is three years in jail, or a fine.

The decision to prosecute Faal and Njie has already raised eyebrows in some quarters. Jeffrey Smith, senior advocacy officer at the Robert F. Kennedy Center for Human Rights and keen follower of the Gambia, told the Daily Maverick: “It will intensify the crackdown on human rights in the Gambia. President Jammeh, as he did after the US-Africa Leaders Summit, will no doubt use the arrests as a propaganda tool to demonstrate to his people that the United States stands behind him, and therefore there is nothing they can do to stand in his way. Jammeh has acted with absolute impunity for twenty years, with no one from the outside world standing up to his brutality, and this will surely embolden him further.”

In other words: “The Gambia is a veritable black hole for human rights, and the situation will only get more grim following these recent developments,” said Smith.

Curious too is the official US classification that the Gambia is a “friendly nation”, a necessary precondition for the Neutrality Act to apply. “This is a regime that is currently on a nationwide witch hunt for suspected ‘homosexuals’, detains suspects, and tortures prisoners routinely. I’m failing to see the friendly aspect of this all, save for the fact that Gambia and the Jammeh regime participated with the US in the CIA torture programme,” said Smith.

Then there’s the sheer hypocrisy of the charges. The Neutrality Act specifies applies anyone who “knowingly begins” or “provides for” any military operation against a foreign territory with whom the US is at peace. The breadth of this wording could easily include the likes of Dick Cheney in the run-up to the Iraq War; US black ops units on missions in dozens of countries; and drone operators launching bombs at alleged terrorists as far afield as Pakistan, Yemen and Somalia.

While the decision to prosecute Njia and Faal is discomfiting on several levels, there is some sympathy to be had for the US Department of Justice, who can’t just let the plotters off the hook entirely: sovereign states can’t sit back and allow their territory to be used as a staging ground for attacks on foreign soil. It makes the state complicit in the attack (this was, remember, the entire US justification for the war on Afghanistan in 2001: the Taliban were harbouring Al Qaeda, and were therefore legitimate targets themselves). President Jammeh was quick to float this argument, publicly blaming foreign-backed dissidents.

And for all that Jammeh is a villain, it’s hard to paint Njie & Co. as heroes. Their motives are opaque, and Njie’s plan to install himself as interim president smacks of delusions of grandeur. Military coups rarely lead to more democracy and more accountability: just ask Jammeh, who himself came to power in one.

Not that their motives are particularly important at this point. The coup failed. Worse, it backfired – far from toppling Jammeh’s regime, it is more likely to encourage him. DM