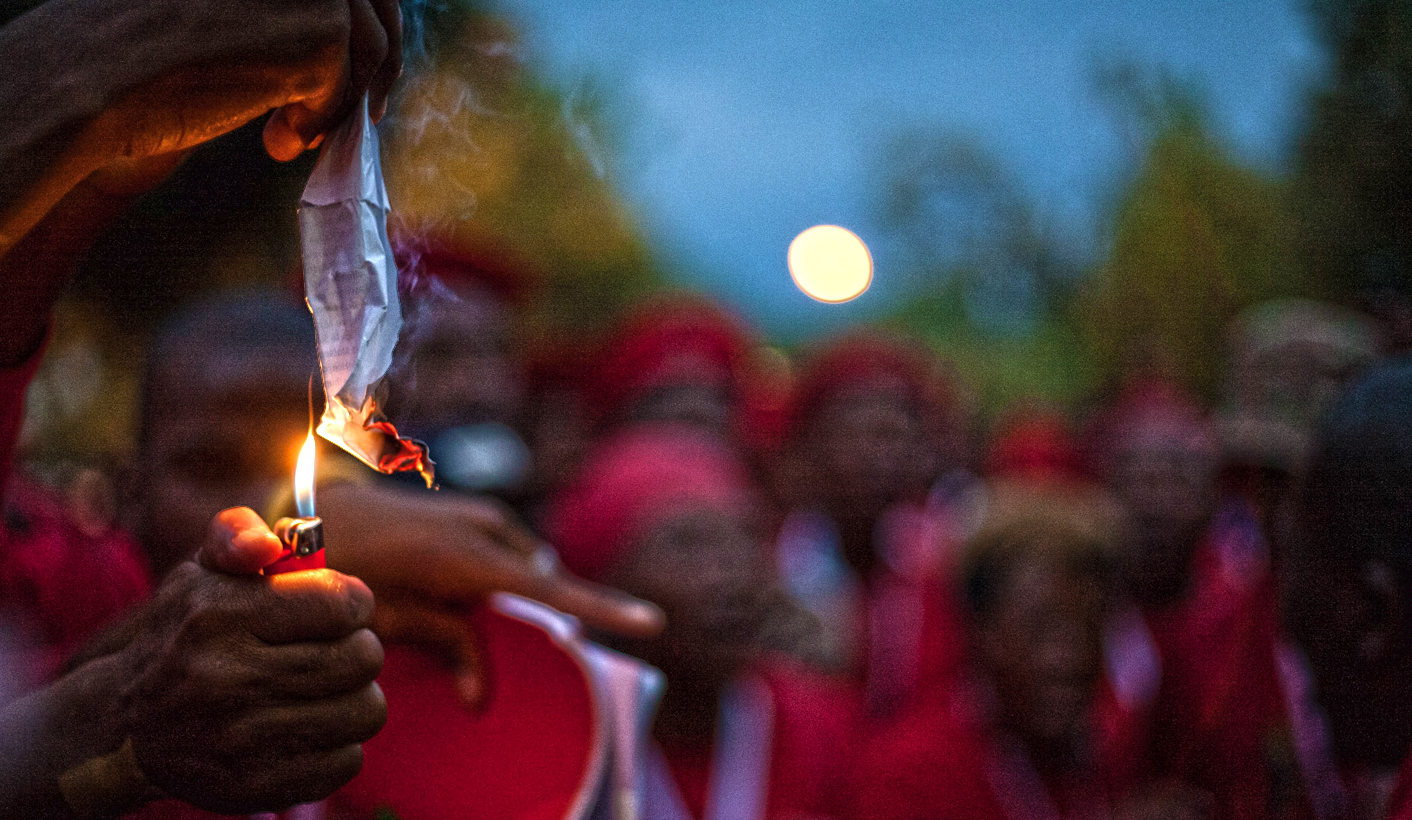 On Sunday afternoon, after Julius Malema promised a smooth conference, things went a tad pear shaped. For a party born in anger, with anger as its default, it should surprise no one that things got messy. Elections bring losers. And losers get mad. By RICHARD POPLAK.

Politics. What a mess.

On Sunday, at the EFF’s First National People’s Assembly, Julius Malema insisted that there was no story to tell. He leaned forward in his seat during the press conference, like Buddha in an overall, and told us all to calm down. “There is nothing here,” he said. All was under control. This was Club Med for Marxist-Leninists.

On Monday, even he would have to agree that stories have been popping all over the place like mortar rounds. He might have guessed that stuff was going to get messy, mostly because he was about to make it so. Elections for posts on the Central Command Team (CCT) were soon to get underway, and there were going to be casualties. Turns out, Malema’s lengthy honeymoon may have been one of them.

It was supposed to be simple. The first part of the day was devoted to political education. The second item on the schedule was the nomination of the 35 members who would form the CCT. Then, everyone would skip off to their respective commissions and ratify the constitution.

The political education went smoothly. Nominating the delegates did not. The superficial issue was an item we’ll call The List. This slip of paper, titled “EFF CCT Additional Members Finalized and Endorsed By All Provinces”, was distributed as a de facto voting slate. This, moaned the delegates from Gauteng, was not a nomination process, but the word of God.

God and democracy share an uneasy relationship; one man’s deity is another man’s dictator. As the nominations got under way, it became clear that anyone not on The List was not going to be nominated. The CiC would raise his hand, nod to Deputy President Floyd Shivambu, and those in the auditorium—and by those, I mean North West and Limpopo—would immediately follow, meeting the 30 percent threshold for a nomination.

In other words, to most people who weren’t on The List, and to the delegates who wanted them on it, this was a massive rig job. The CiC no longer looked like Buddha, but the Malema of old, the Malema of the ANC Youth League, Malema the stone-cold killer — hard-faced, rigid, unmoving.

But now we must arrive at the point where history repeats itself, first as tragedy, then as farce. Those famous words, courtesy of Marx, were no doubt clanging around in Andile Mngxitama’s head after he was nominated. (He was, by the way, third on The List). Mngxitama is the party’s ideologue-in-chief, it’s head shit-stirrer, it’s puncher of Freedom Front MPs. He declined the nomination, stating, “Comrade president, please protect this movement. Initially I was going to accept but my revolutionary conscience will not allow me to accept.”

And so, barely one and a half years into the EFF’s history, it has its Trotsky moment. The hall was ripped through with the acid stench of animosity, the Gauteng delegates started singing, and the Western Cape crew were in outright mutiny. Every time Malema raised his hand, another candidate was nominated. The occasional Fighter stepped up to the mike, braying with discontent, and was abruptly shut down by the officious, unbearable adjudicator.

Then, Khanyisile Litchfield-Tshabalala, one of the more prominent EFF MPs refused her nomination. And Western Cape stalked out, into the wet campus, where the anger wiped away the manufactured peace of the past several days.

“We might as well go back to the ANC,” yelled one Fighter outside the hall with other delegates, mostly from Gauteng, who also left the event. Another woman, who didn’t want to be named, said that Malema was doing to the EFF exactly what the ANC did to him, by purging opposition within the party and choosing slates over democratically electing leaders.

“We left our children to come and build this organisation,” she added. “This is an embarrassment.”

Photo: Delegates console each other outside the EFF conference after walking out in protest. (Greg Nicolson)

The EFF member said they had taken a risk by leaving the ANC to join EFF but did so out of hope for change. As newly-elected EFF Secretary General Godrich Gardee and Treasurer Magdalene Moonsamy moved outside the hall to where the enraged delegates had gathered, someone yelled “KFC leadership”.

Indeed, this was a family bucket of trouble. Raymond Silinga, a Ward 51 chairperson from the Western Cape, won the angriest Fighter of the Evening Award. “Our delegates were dropped, dumped from this conference,” Silinga insisted, explaining that buses from Cape Metro had left them to rot in a garage halfway to Bloemfontein. Their candidate, Mpho Ramakatsa, was not in the Malema camp, and there was little chance that he’d make the CCT. “We’ve been sleeping in cars,” Silinga said. “Because we don’t support their position for Secretary General. 2016 is coming. 2019 is coming. There will be ramifications. The CiC is killing our party. We’re going to de-campaign the EFF.”

On Sunday, Malema insisted that anyone daring to challenge the leadership or cause a disturbance would be “dealt with.” Now, Silinga was telling him to bring it on. “My branch got him 39,000 votes! He must deal with me now. We are ready. They can kill me tonight. I will die for my principles. I don’t even care if I die tonight.”

Photo: An EFF member pulls another Fighter away from a journalist he blamed for the party’s troubles. (Greg Nicolson)

Not everybody felt this way. The dissenters were still a minority, but an angry one, in a party born out of anger, in which anger—at the ANC, at white minority capital, at shitty living conditions, at the unfairness of life on Earth in the 21st century—is the driving force. Many of the delegates arrived as political naïfs; they will leave as pissed off sophisticates. Elections are elections—there is always a loser, and fake elections are no different. But the mood outside the hall, where perhaps 300 Fighters were now mocking Malema and comparing him to Zuma, was very different to the mood inside the hall, which was merely exhausted.

“Comrades,” said Malema, when his 35 nominees were finally in the bag, “we are going to proceed with this conference. “I cannot be called to intervene in issues of leadership. If your candidate didn’t get elected, you’ve only got yourself to blame.” Malema insisted that it was perfectly acceptable to lobby while the nominations were in progress, but the EFF rules clearly stated that this was not the case. “We cannot be blamed. These are elections, there are emotions involved. Those outside only have themselves to blame. That is the pain of democracy.”

Yes, but how much pain is too much pain? Malema is, of course, perfectly happy to rip up a parliamentary session by banging around hard hats, but when his own, minted-in-Limpopo democratic process was disrupted, he was by no means sanguine about it. Was this it, were the wheels coming off the EFF? “The ANC must celebrate because of his stupidness,” said one Fighter from Gauteng. But Malema clearly wasn’t willing to compromise on his list of CCT mandarins. He is a bare knuckle fighter, and this was bare knuckle politics. Ideology came second; taming the CCT came first.

There will be many doom-laden prognostications for the EFF’s future in the coming days. But the party is not over. It might be slightly wounded, but politics is the art of healing from wounds faster than your opponents do. Still, many in the hall were reminded of Malema’s essential character as a politician: he dictates. He is.

“This place is going to burn tonight,” said Wiekus Koetze, who readers might remember as the White EFF Guy. “With Andile, we lost a great leader tonight. We’ve lost Tshabalala. They backed this organisation from the ground. We took money from our pockets…” Koetze’s face was red with anger and disappointment. “Now we’ve got one direction, and it’s, Ja baas.”

Then he drove back to the Protea Hotel. And nothing burned except a copy of the The List, half a beret, and a bit of a t-shirt.

The List. Andile-as-Trotsky. Juju-as-Stalin. Burning berets. All the splendid iconography. For a leftist revolutionary party, this is business in usual. For those who were expecting, demanding something more, this must have come as something of a disappointment.

Tragedy, then farce. Elections get messy. Those are the rules. Not everyone around here understands them. By the time they get home, they will. DM