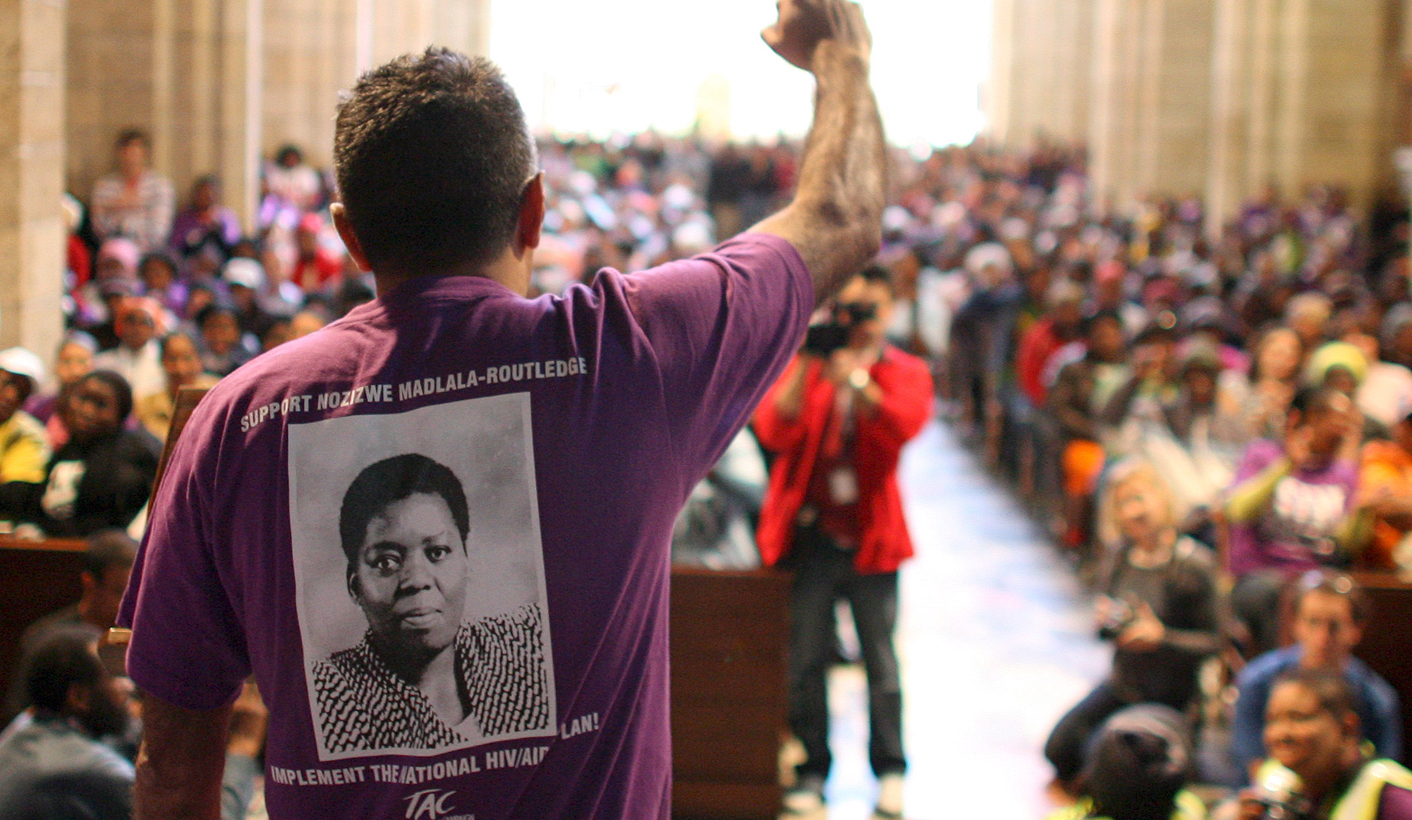 Former Treatment Action Campaign (TAC) leader, Zackie Achmat, has called on the trade unions to come to the rescue of TAC which has been mired in financial difficulties. By ALIDE DASNOIS for GROUNDUP.

Sixteen years after its launch on 10 December 1998, TAC is the victim of its own success, as major donors re-assess the need to support the fight against HIV in the light of much improved treatment and falling death rates.

TAC’s insistence on the need to keep monitoring treatment and its involvement in new campaigns, against cervical cancer and drug-resistant TB, among other things, have not secured sufficient funding in spite of powerful pleas from doctors, researchers and activists around the world and from notables like Archbishop Desmond Tutu.

But TAC’s financial problems could be solved in a day, says Achmat, if the wealthy trade union investment companies came to the party.

“It is scandalous beyond belief that the trade unions don’t fund social movements like TAC and contribute to the social economy”, says Achmat, who has not been involved in the TAC for several years. “Many of their members would not be alive if it were not for TAC.

“It is the biggest tragedy that we have to rely on foreign funding,” he says. “When I read that TAC might have to close down I was shocked. I’d heard rumours but I thought the problems could be remedied. What has happened is wrong.”

The corporate world too has a responsibility to TAC, Achmat says. The mining companies especially must take responsibility for HIV-related deaths as a result of a migrant labour system which spread the disease from the mines to the rural areas and to neighbouring countries.

TAC’s annual budget of about R35 million is lower, he says, than in his day. The organisation spent R51 million in the financial year ending February 2009. “So R35 million is not a lot of money.”

TAC was founded on the 50th anniversary of the Universal Declaration of Human Rights, and Achmat, like Tutu in his message to donors, has always seen it as a human rights as well as a health movement.

When TAC was founded, Achmat says, HIV was seen as something which affected white gay men.

“We had to go beyond that. TAC mobilised trade unions, faith organisations, children’s rights groups, women’s rights groups, coalitions of NGOs and human rights bodies. We built a movement of the most vulnerable people with the skills and confidence to speak out. We said HIV as a human rights issue was the concern of every person in the country.”

Looking back, he sees the T-shirt TAC brought out in December 1998, soon after the murder of openly HIV-positive activist Gugu Dlamini in KwaZulu Natal, as an important milestone. The T-shirt, with the words “HIV” and “POSITIVE” on the front, symbolised the move from mourning to resistance and identified the wearers’ support for those living with HIV.

But TAC’s major contribution across the years, Achmat says, is the research the movement has done into the science and medicine of HIV and TB, into patent and competition law, and into health systems. “The movement was built on knowledge and research,” he says. “All of us had to go through education on those matters. It didn’t matter if you had no formal education or if you had many degrees. Some of the best and most knowledgeable people in the movement had no degrees.”

Education took place on the picket line as well as in the workshop, he says, through songs, posters and pamphlets as well as the solid policy documents for which TAC became known. The material was distributed through branches, with the first in Gugulethu.

Though to many people the movement is known for its landmark court cases, including the Constitutional Court ruling in 2002 that the state must provide antiretrovirals to HIV-positive pregnant women, and for its success in forcing the drug companies to license cheaper generic medication, Achmat remembers a “range of tools” in the battle.

“We wrote countless letters, to ministers, to health MECs, to institutions, and the idea was to bring in the voices of ordinary people and always base what we said on constitutional rights and proper law and evidence. We sent petitions. You don’t do a demonstration unless you’ve sent a letter or a petition. Those are the age-old tools of our history, part of the DNA of South African politics, and it’s the most important part: people’s will and people’s affirmation of their rights.”

Encouraged by a Constitutional Court ruling in a case involving SAA cabin attendants who tested HIV-positive, TAC decided to tackle the issue of antiretroviral drug prices, then many thousands of rands per month per patient.

“We didn’t want to go to court but we realised we were going to have to. Treatment was unaffordable,” says Achmat, who refused antiretroviral drugs himself for five years, in a bid to have treatment made available to all who needed it.”

We couldn’t go and sue the government for access to antiretroviral treatment because that would have bankrupted the government,” he says.

“The drug companies had taken Nelson Mandela and Nkosazana Dlamini-Zuma to court because of a law that they passed which would make medicine more affordable. So TAC joined the case. We brought legal arguments but also evidence about prices and evidence that people were already dying without medicines.”

Clearly the court “was going to listen” to those arguments, says Achmat, and it did – but the battle for cheaper drugs did not stop there, and in March 2000 TAC launched the Christopher Moraka Defiance Campaign, defying patent laws to import drugs for systemic thrush, an opportunistic infection affecting many people living with HIV.

“We went to Thailand and we imported generics and distributed the medicine through the clinics. We had 200 doctors signed up to distribute the medicine. Hundreds and thousands of pills were imported through TAC over the years and shipped all over the country.”

In August 2001 TAC successfully took the government to court to force a plan to prevent mother-to-child-transmission of HIV. Other battles followed, on prisoners’ rights and access to information, and new ground was broken in the use of competition law against the drug companies.

It’s a long history, but TAC leaders point out that the battle against HIV is not yet won. New challenges include medicine stockouts, weakening health systems, growing evidence of poor adherence to drug regimes and the spread of drug-resistant TB.

“We have to think in a revolutionary way. And by that I don’t mean burning tyres, I simply mean going to occupy Discovery Health and Netcare and Medi-Clinic,” he says.

Meanwhile, Achmat says, the urgent need is to find money for TAC. “In the beginning we printed our posters by hand, and we took money out of our pockets. We need to do that now. There are many great people in TAC doing brilliant work. I would urge them to stay and keep building. The money will come.” DM

Photo: South African HIV/Aids action group, Treatment Action Campaign (TAC) leader Zackie Achmat gives a speech to supporters during a protest meeting at St.Georges Cathedral in Cape Town, South Africa 29 August 2007. The TAC protested in support of axed South African deputy Minister of Health, Nozizwe Madlala-Routledge, who was fired by South African president Thabo Mbeki for attending an AIDS conference in Spain without permission from the government. The TAC saluted her work in the fight against HIV/Aids and slammed the government and Health Minister Manto Tshabalal-Msimang’s poor handling of the epidemic. EPA/NIC BOTHMA