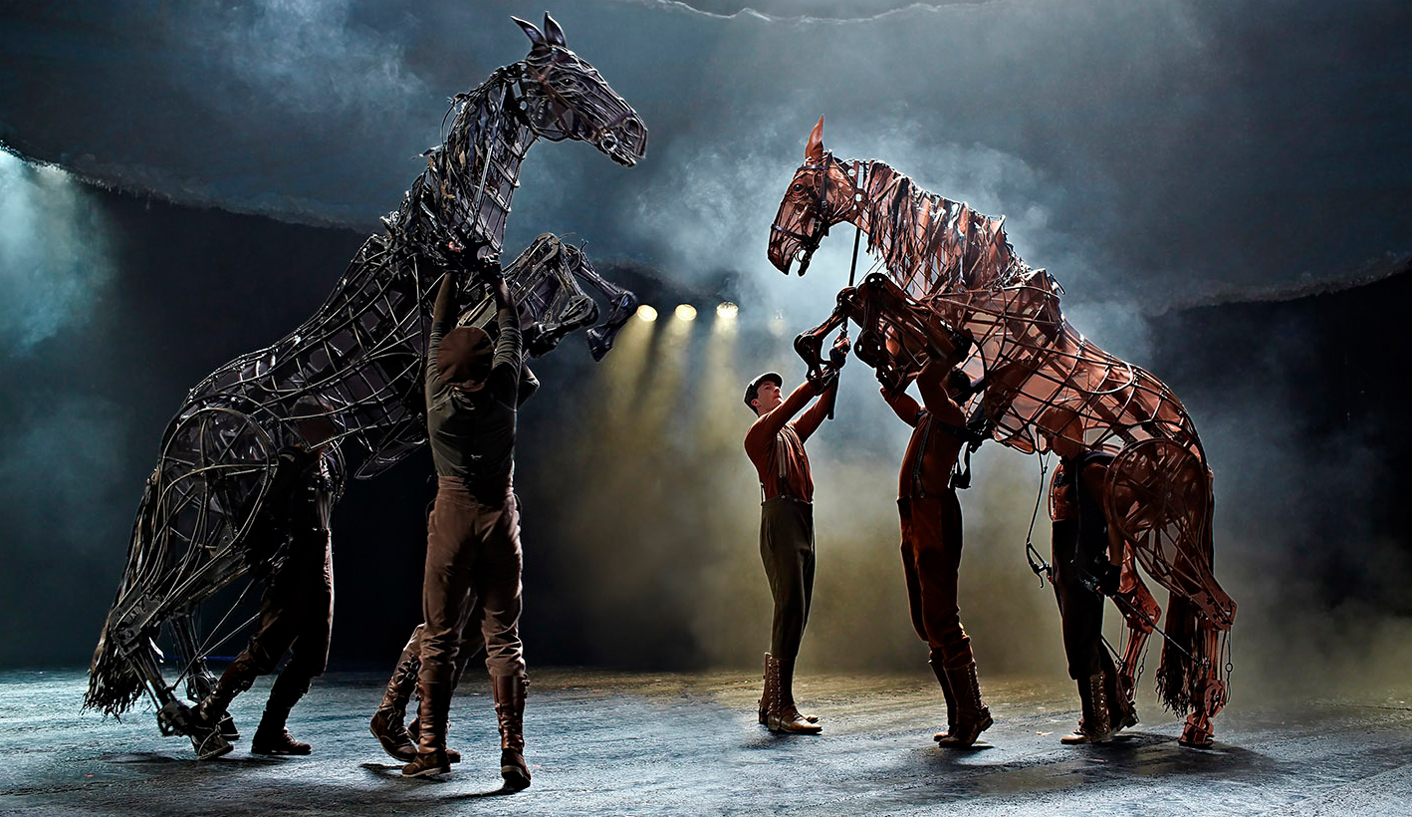 The National Theatre of Great Britain production of ‘War Horse’ has finally ridden into Cape Town, conceptual home of Joey and the other magnificent puppets conjured to life by Adrian Kohler and Basil Jones’ Handspring Puppet Company. The show has toured to several countries the past seven years wowing audiences and arrives on our shores with much baggage and great expectations. By MARIANNE THAMM.

I shall begin with quote from the Meditations of Marcus Aurelius: “The object of life is not to be on the side of the majority, but to escape finding oneself in the ranks of the insane.”

And so I must, because I do not find myself on the side of the majority view with regard to this mammoth and internationally celebrated production, align myself with the insane.

But first, aspects of War Horse where my view may overlap with that of the majority. There is no doubt whatsoever that War Horse is an impressive feat of choreography, technology, design and stagecraft, particularly the breathtaking puppets by Handspring Puppet Company, which have lent this adaptation for the stage by Nick Stafford of Michael Morpurgo’s 1982 touching children’s story its unique charm and magic.

Of course, the puppets would be mere inanimate sculptural heaps of cogs, struts, leather and cane frames stretched with gauze without the extraordinary work of the puppeteers who bring them to exquisite life on stage. And this they do with astonishing accomplishment. To see Joey, Harold, the quarrelsome Goose, and Topthorn, the rippling black stallion, gallop and speed across the stage is wondrous in the true sense of the word.

Pieter Toerien, The National Theatre of Great Britain, Handspring Puppet Company and sponsors, Rand Merchant Bank, are to be congratulated for bringing this hellishly expensive production to South Africa so that we too can be exposed to a piece of professional theatre that has wowed around five million on its tour outside of London’s West End – to Ireland, the US, Canada, Germany, Holland and Australia. So far, South Africa is the only African country to have made it to the touring itinerary.

The majority who have experienced the production wherever it has played have “swooned” or have termed it “life-altering”, which is where this reviewer parts ways with the crowd.

In the programme note, Carolynne Waterhouse of RMB writes, “This show is for thinking people who are cognizant of the First World War, of the horrors of war, of the global realities of war, of the tragedy all around.”

The fact that the play has arrived in South Africa on the centenary of the First World War is apparently entirely coincidental, but there is no doubt that commemorations across the UK and Europe have added to its global appeal.

The story is a simple one. A rural farm boy, Albert Narracott (Lee Armstrong) is tasked with taking care of a half thoroughbred his father has bought at an auction for a handsome sum. The boy names the horse Joey and trains him to plough his father’s fields in order to earn his keep and not be resold.

At the outbreak of World War I Joey is commissioned to fight in the war. It is a tearful parting between a boy and his beloved beast. Joey soon finds himself in the heat of the battle, caught in enemy crossfire and eventually captured by the Germans where he is put to work.

Back on the farm Albert never forgets his best friend and eventually enlists on a mission to find his horse. Which of course he does, which brings the house down.

Far from being “thought provoking” this stage adaptation is sentimental, mawkish, shamefully manipulative, overly long and at times excruciatingly boring and slow. Stafford’s stage characters are one-dimensional cardboard cutouts who do not secure much emotional traction with the audience. This limits the actors terribly who are reduced to merely repeating the lines. It is, in fact, the puppets that soak up the bulk of any feeling or emotion on the stage. And it is the puppets you will remember long after leaving the theatre.

The slow and plodding pace of the piece is perhaps deliberate in order to show off the remarkable lifelike qualities of the puppets – the flick of an ear here, the swish of a tail there. Look at Joey’s chest move! It is almost as if he had a real horse heart pumping with fear. Pity then the real humans on the stage themselves lack heart and life.

I could have done without the “songman”, Bob Fox, who would emerge from the wings pumping an accordion and singing traditional, sentimental existential folk songs. I did secretly hope that a piece of shrapnel might find its way into his heart.

The battle scenes, while certainly impressive, are loud and overwhelming, as they perhaps should be. But there were many occasions I longed for a remote control so that I could fast forward to the action or a denouement I knew was around the corner and so I could see more puppet and less human.

The horrors of war continue to haunt humankind. There are societies in the contemporary world where our human brethren still kill each other for some or other ideology, religion, oil or patch of earth.

War Horse is not an anti-war play. Claiming this attempts to add gravitas that simply is not there. This is a story about a boy and his horse forced to go off to war and told in a wonderfully original and expensive fashion. It offers no commentary on war aside from what each audience member will bring in their own heart and mind. A mere reenactment of war doesn’t not in and of itself offer commentary.

On the contrary the bravado, the songs, the sentimental remembrance of “the boys” who died in their millions only serves to reinforce the terrible and stupid cyclical nature of war and the fact that human beings do not learn from history.

For a real, literary and searing look into the heart of darkness exposed to those who were forced into this war, read the poems of celebrated war poets Siegfried Sassoon or Wilfred Owen. For the thrill of seeing Handspring Puppet Company’s genius, go and see War Horse (that’s if you can come by a ticket). DM