2014: The year of changing political tides 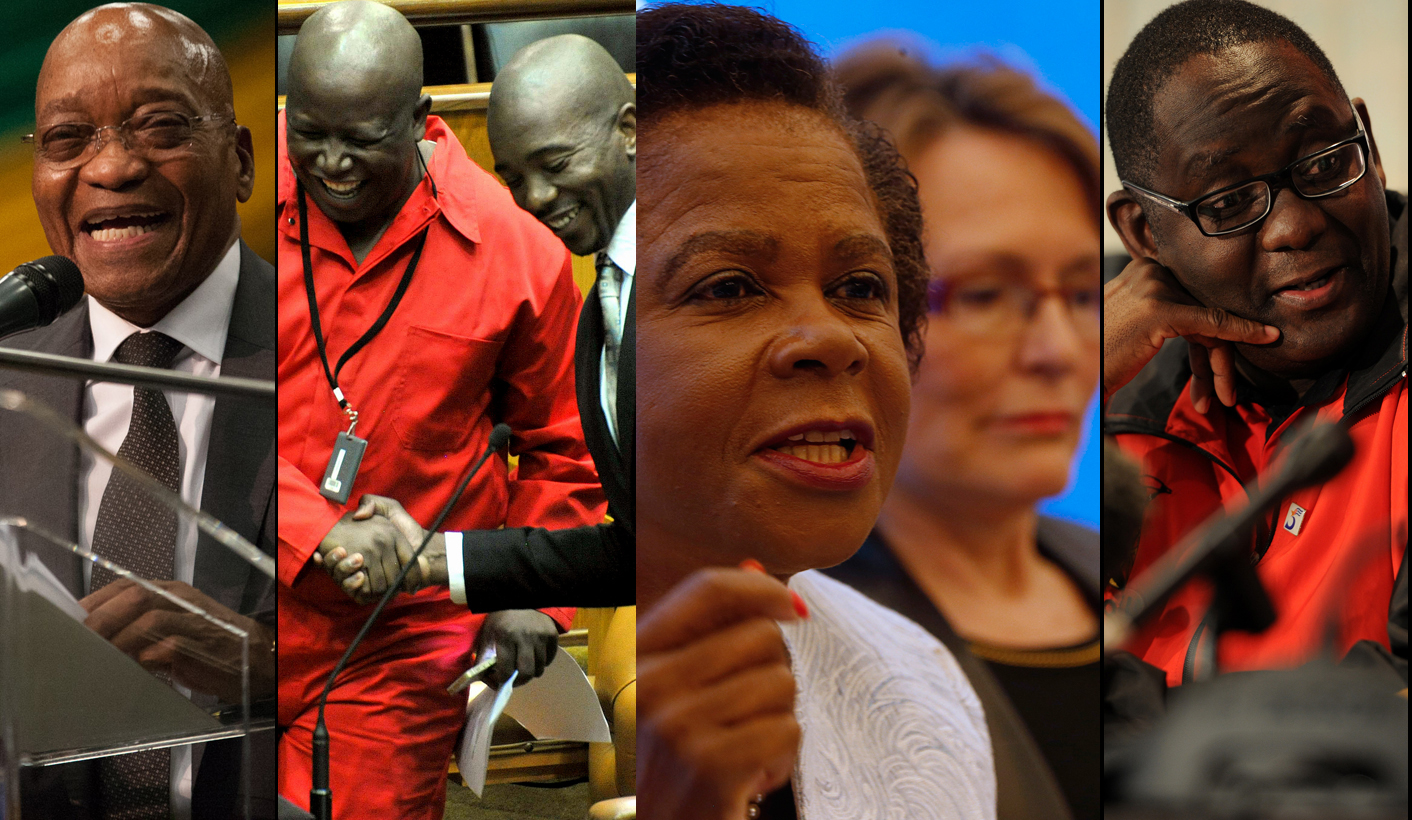 In politics, it seems every year turns out to be a year of living dangerously. But with the fifth democratic elections, 2014 was always going to be a big year in South African politics. It was the year the ANC got a big fright with the possibility of losing control of Gauteng. It was also the year that the Economic Freedom Fighters altered the dynamics in South African politics, particularly in Parliament. Mamphela Ramphele kissed and said goodbye and Cosatu fell apart. And for one more year, President Jacob Zuma was a dividing force and Nkandla loomed large in the national discourse. By RANJENI MUNUSAMY.

In terms of news events, there is no doubt that the Oscar Pistorius trial stole the show in the field of media coverage and overall public interest. The trial ran concurrently with the 2014 elections campaign and was the year’s biggest talking point, particularly its outcome. But when it comes to an issue that provoked even greater indignation and disillusionment, it was no doubt the security upgrades at President Jacob Zuma’s Nkandla residence.

In March this year, Public Protector Thuli Madonsela released an in-depth investigation report Secure in Comfort on the R246 million upgrades at Nkandla, which found that the president and his family benefited unduly from the project. She also found that Zuma had violated the Executive Members Ethics Act by not acting to protect state resources. But the section of the report that would cause seismic activity later was Madonsela’s recommendation that Zuma should pay back a “reasonable percentage” of the cost of the cattle kraal, the chicken run, the visitors’ centre, amphitheatre and swimming pool.

Zuma opted not to respond to Madonsela’s report until after the elections, by which time there was a new contingent of elected representatives in Parliament. He probably lives to regret that decision as Julius Malema and his Economic Freedom Fighters (EFF) used the Nkandla issue to catapult onto the centre stage, demanding that Zuma be held accountable and pay back the money.

Nkandla has been the pivot on which parliamentary battles have swung, resulting in an unprecedented hostile relationship between the ANC and opposition parties. It has caused the National Assembly to suspend its work, riot police to enter the House, twice (the second time MPs were injured in the tussle) and the EFF contingent to be suspended without pay.

Although Zuma has been let off the hook, with the National Assembly adopting the report on the Nkandla ad hoc committee releasing him from responsibility for the project, the matter is not yet over. Opposition parties are still challenging it, and will continue to hound Zuma for failing to account about his role and knowledge about the project.

The Nkandla issue has been spectacularly mishandled by the ANC, and caused a permanent stain on its image. It hung over the election campaign and has become a monument to grand corruption in the state. Corruption was a major campaign issue in the 2014 elections, and the Democratic Alliance (DA) and EFF in particular, maximised on the ANC’s inability to manage the Nkandla matter.

Most parties had great expectations about the elections; most disappointed with the results – none more so than the former leader of Agang, Mamphela Ramphele, who burst onto the political scene a year ago, with ambitions of being the next president of the country. She convinced herself, a handful of followers and some in the international media that she was the new messiah, ready to save South Africa from sure damnation.

When the hype around her party petered out and she was struggling to keep Agang afloat financially, Ramphele attempted to engage in a pact with the DA. DA leader Helen Zille fell for the trick without checking the terms and conditions. After announcing that Agang leader would be the DA’s presidential candidate, and sealing the deal with a much-photographed kiss, the partnership between Zille and Ramphele collapsed in days.

Ramphele’s plunge back to political oblivion was sealed by her party’s poor performance in the elections, securing just 52,350 votes out of the 18,4 million cast nationally. Agang won just two seats in Parliament, and Ramphele slunk off into the political wilderness.

In sharp contrast, the EFF emerged as the third largest party in Parliament with 1.1 million votes – 6.35% of the national ballot. With 25 MPs in the National Assembly, Julius Malema’s party has shaken up how parliamentary politics have been conducted over the past 20 years. From their attire of red overalls and domestic worker uniforms to fiery exchanges with the presiding officers, the EFF did what they promised to do: change business as usual in Parliament.

Whether the EFF’s militancy and aggressive approach is sustainable is dependent on a number of factors. This includes whether it can emerge from its elective conference this weekend intact, without too much erosion of its internal cohesion. It is also dependent on how much ammunition the ANC hands over to the opposition to be pounded with. It also remains to be seen how long the co-operation between opposition parties can hold. The ANC and its presiding officers will remain under pressure for as long as the opposition parties present a strong, united front.

This is largely dependent on DA parliamentary leader Mmusi Maimane, who had to learn the ropes as a new parliamentarian while filling the void left by Lindiwe Mazibuko and steadying the ship in the DA caucus. Maimane looked overawed by the responsibility at first, and also had a new mandate not to alienate voters who were put off by Mazibuko’s aggression. But the co-operation with the EFF has helped Maimane come into his own, and he is now bolder and more adept at playing the role of Leader of the Opposition.

However, because of his inexperience, Maimane can be misled into trying too many stunts in Parliament in order to rock the boat as much as Malema can. Not all of them work, as the DA discovered with their failed attempt to censure the president, and can alienate other opposition parties. Maimane’s honeymoon period is now over – he needs to learn to play the game and decide on a strategy to keep the ANC permanently on its toes.

The ANC will hold its midterm national general council (NGC) in June, and will spend the next few months preparing for this gathering of delegates from branches all over the country. The ANC leadership seems determined to ensure the NGC is merely a midterm review of its 2012 conference resolutions and not a platform for rebellion, as has been in the past. But the ANC is also gearing for local government elections in 2016, and its next elective conference in 2017. The sands in the organisation will begin shifting next year, as they inevitably do when people begin competing for leadership.

Zuma is now firmly past his sell-by date and ANC branches will have to begin discussions about the future of the party and the country. Despite Deputy President Cyril Ramaphosa appearing to fit comfortably into the position of party leader and state president, standing in for Zuma quite often over the past six months, the balance of power can quickly shift. There is already discomfort amongst some in the Zuma camp that Ramaphosa appears to be “running the country already”, and there could be moves to curtail his powers and influence.

Apart from mediation roles on the continent, and attempting to manage relations with the opposition, Ramaphosa has been charged by the ANC to lead the task team intervening in the Cosatu crisis. The ANC task team managed to hold an uneasy truce between conflicting leaders and unions in Cosatu during the election period, but was unable to present a workable solution to the crisis. Since the expulsion of metalworkers’ union Numsa from Cosatu, the ANC task team has stepped back in to restart a “political process” to negotiate a resolution.

The position of Cosatu general secretary Zwelinzima Vavi remains precarious in the federation with disciplinary charges still hanging over him and some of his detractors still wanting him expelled. There are attempts to re-establish a working relationship with his arch-nemesis, Cosatu president S’dumo Dlamini, with the promise of a special national congress in 2015. But Cosatu’s problems are deep-seated, with or without Vavi, who has delayed making a decision about his future political role in South Africa.

In the coming week, Numsa will facilitate the launch of a new political player on the spectrum, the United Front. Numsa has spent the past year doing the spadework for the United Front, after its special congress last December decided to withdraw support for the ANC.

The United Front looks set to maximise on disgruntlement with the ANC, particularly amongst the poor and working class. It is targeting the same constituency as the EFF and it remains to be seen whether there will be coalescing in the future as the EFF and United Front evolve.

The changing tides in 2014 have set the scene for a further shake-up in South African politics over the next five years. Growing activity to the left of the ANC will see changes in the ruling party and the opposition as they respond to the new dynamics. There is bound to be a lot more militant and leftist parlance in politics and in economic debates.

The ANC will probably continue fighting fires, as tougher economic conditions and financial pressures are on the cards for 2015.

The centre of gravity is moving away from the ANC, and if it is left as flat-footed as it was in 2014, it is heading for further loss in electoral and popular support. If the ANC does not use the year 2015 to regroup and strategise, it could be in for a hell run in the 2016 municipal elections, and another divisive period as it prepares to elect a new leadership.

For them, there could be many more anni horribiles in the future, as 2014 proved to be. DM