Toyota Yaris Hybrid: All charged up 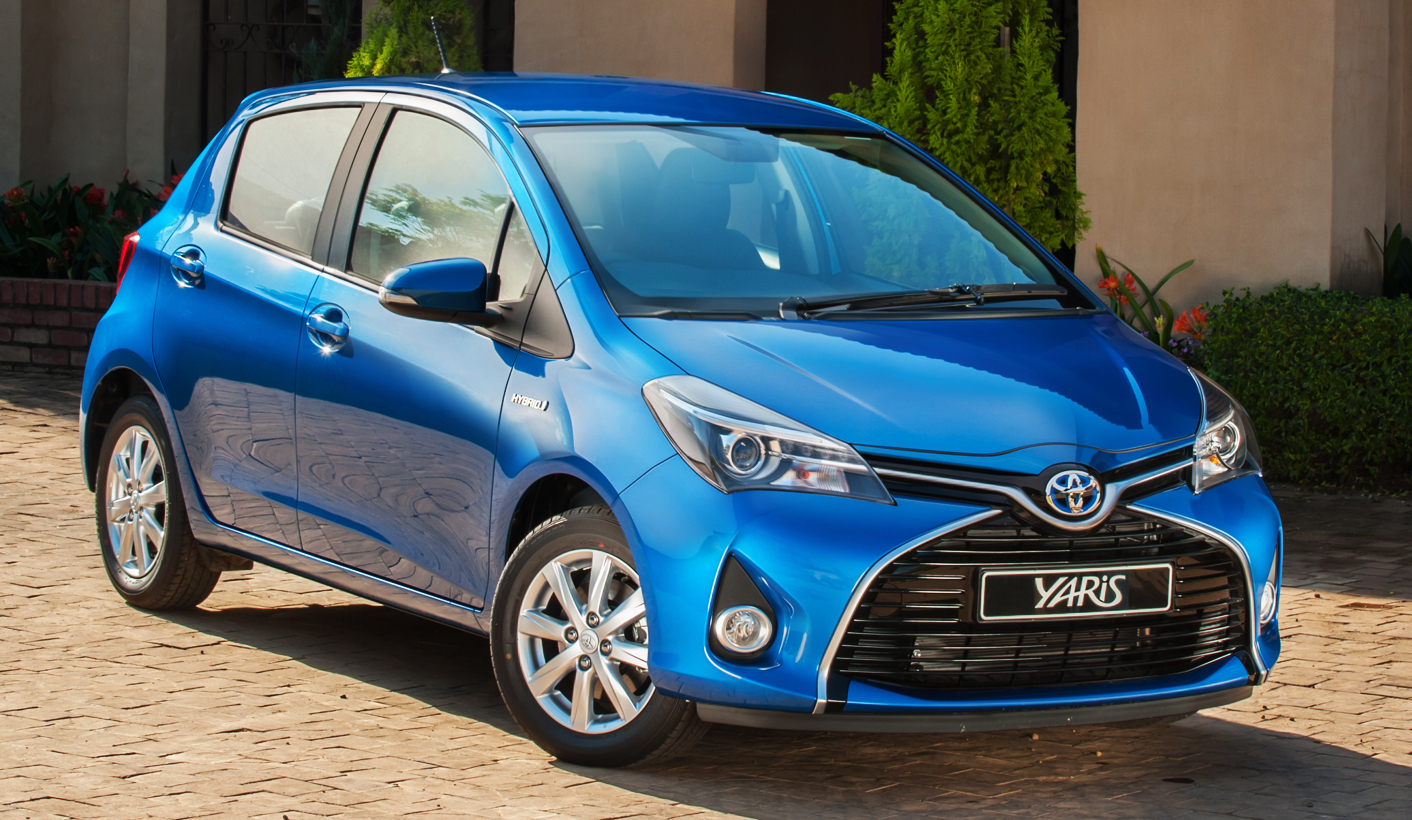 While the country faces the ever darkening gloom of load shedding, cars like the Toyota Yaris Hybrid prove that there’s something to be said for a car that recharges its own batteries on the move – and saves petrol in the process. It’s also meant to be greener than your average runabout. By DEON SCHOEMAN.

Hybrid cars are becoming a buzzword in a motoring world seeking to reduce its environmental footprint by reducing fuel consumption and exhaust emissions. Not that hybrids are anything new: the Toyota Prius has been around for more than a decade now, while Lexus has offered hybrid alternatives to its luxury cars and SUVs for some time.

In both cases, the hybrid drivetrain combines a conventional internal combustion engine with an electric motor and a battery pack. The battery pack allows a limited level of zero emissions, electric-only operation, usually at low speeds.

Once the battery’s charge is exhausted, the normal engine takes over from the electric motor. Under coasting or braking, the electric motor becomes a generator that charges the battery pack, thus harvesting otherwise wasted energy. And under hard acceleration, the motor can even contribute to the power output of the engine – if the battery has enough charge.

This hybrid drivetrain is different from the so-called plug-in hybrid, which employs a larger-capacity battery pack that can be charged externally, with the petrol or diesel engine acting as a supplementary power source. Plug-in hybrids are meant to operate mainly in electric mode, with the internal combustion engine’s role more focussed on recharging the battery pack than actually propelling the car.

The Yaris Hybrid is not a plug-in hybrid. But at present, it is the only subcompact hatchback in South Africa offering a hybrid drivetrain. And since compact cars are generally more affordable than their bigger brethren, the small car segment is attracting the largest sales volumes.

Recently updated, the Yaris doesn’t come close to the top of the pecking order in a segment where VW’s Polo rules the roost with sales well above the 2,000 unit mark. But its hybrid offering does set it apart from the small car crowd – as does a styling approach that turns heads, if not always for the right reasons.

Toyota says it wanted to make the Yaris more European and more emotive. I’m not sure it has succeeded on either count, but the new front end design is certainly bold and distinctive. It’s also complex and unnecessarily fussy.

The hatchback’s ‘face’ is dominated by a disproportionately large grille, garnished with X-shaped brightwork, and flanked by slim, slightly protruding xenon headlights. Fog lamps are mounted low, in teardrop-shaped recesses on either side. It’s as if the front end of a much larger car has been grafted onto the otherwise nimble proportions of the Yaris.

By comparison, the rear looks plain to the point of boredom, with only the new LED tail light clusters offering any visual relief from the bland treatment. But let’s face it, nobody buys a Yaris because of its styling traits.

In mitigation, the rest of the styling package is polished, with clean lines, a smoothly rounded roofline, and slim A-pillars. Alloy wheels and colour-coded mirrors add to the smart execution.

Much less apparent is just how much engineering has gone into improving this latest Yaris. The monocoque is lighter and stiffer, resulting in reduced levels of noise and vibration, while upping overall durability. It’s also allowed the suspension to be recalibrated, promising better ride refinement and more agile chassis response.

More obvious, and more tactile, are the upgrades to the cabin, which represent a big leap forward. Admittedly, the hybrid model is also the Yaris flagship, which explains the comprehensive features list, and appointments that are unexpectedly appealing.

The seats are upholstered in an unusual mix of cloth, suede and leather, which sounds fussy, but has both visual and tactile appeal. All the finishes and textures ooze quality, and there’s an overriding sense of cohesion in both ergonomic and quality terms.

As this is a hybrid car, the instrumentation is a departure from the norm. Instead of a rev counter, there’s a drivetrain status indicator divided into power, eco and charge segments. The steering wheel is smartly trimmed in leather, and has multifunction controls for the sound system and Bluetooth-based telephony.

The centre of the dashboard is dominated by a large touchscreen display that not only acts as an intuitive, menu-driven interface for the sound system, but also provides real-time information on fuel consumption and drivetrain operation.

Accelerate hard, and angry red arrows warn that the petrol engine is providing the muscle, and that the battery pack’s charge is being depleted. Coast or brake, and those animated arrows turn green, confirming that dynamic energy is now being harvested to charge the battery.

Of course, the idea is to encourage drivers to drive frugally, and it’s easy to become almost obsessive about trying to keeping the battery icon’s green bars a full as possible. That’s easier said than done, though, and requires a lot of pre-emptive decision-making.

The cabin’s appeal extends to accommodation that is surprisingly spacious, not only for front passengers, but also occupants of the rear. The downside is a small boot – although, the presence of a full-sized spare wheel is a welcome surprise.

Safety is comprehensively addressed via a full house of active and passive systems that includes seven airbags, stability control and ABS brakes.

The Yaris Hybrid combines a four-cylinder, 1,5-litre Atkinson Cycle engine with an electric motor and a nickel metal hydride battery pack. Maximum power output is 55 kW, combined with 111 Nm of torque. The gearbox is a Constantly Variable Transmission (CVT) driving the front wheels.

That said, the CVT operates with seamless efficiency, and noise aside, makes the most of the urge on offer. And yes, there’s more urge than expected. Throttle response is good, and around town, the Yaris Hybrid feels nippy and responsive.

It’s not a hot hatch by an stretch of the imagination, but in the context of a car focussed on economy and efficiency, it has ample get up and go.

Toyota claims a fuel consumption figure of just 3.6 litres/100km for the combined cycle, together with a CO2 emissions rating of 82g/km. But to achieve those figures, you need to drive with tremendous circumspection, using full EV mode whenever possible, and adapting driving style to optimise battery charge and overall efficiency.

Driving the Yaris in full electric mode is a little eerie, and can take pedestrians by surprise, as it’s near silent, especially at speeds below 40 km/h. In and around town, where speeds are lower and there are more opportunities to coast and brake to keep the battery charge healthy, the Yaris seamlessly alternates between electric and petrol engine modes.

But drive it with enthusiasm, and the battery charge is soon depleted. And driving on the open road also offers fewer opportunities to replenish the batteries, which in turn robs the car of some of its potential efficiencies.

Ride and handling are top-class for a subcompact hatch that probably weighs a little more than the standard car. The suspension finds a good compromise between compliancy and response, and turn-in is incisive – even if the steering itself lacks feedback.

With green technology increasingly in the limelight, the demand for eco-friendly cars is also growing. The Yaris Hybrid is better suited to urban than open road driving, and it’s not nearly as frugal as the figures promise, but it is comprehensively equipped, and the cabin represents a big step forward.