The Longest Night: A Year without Mandela 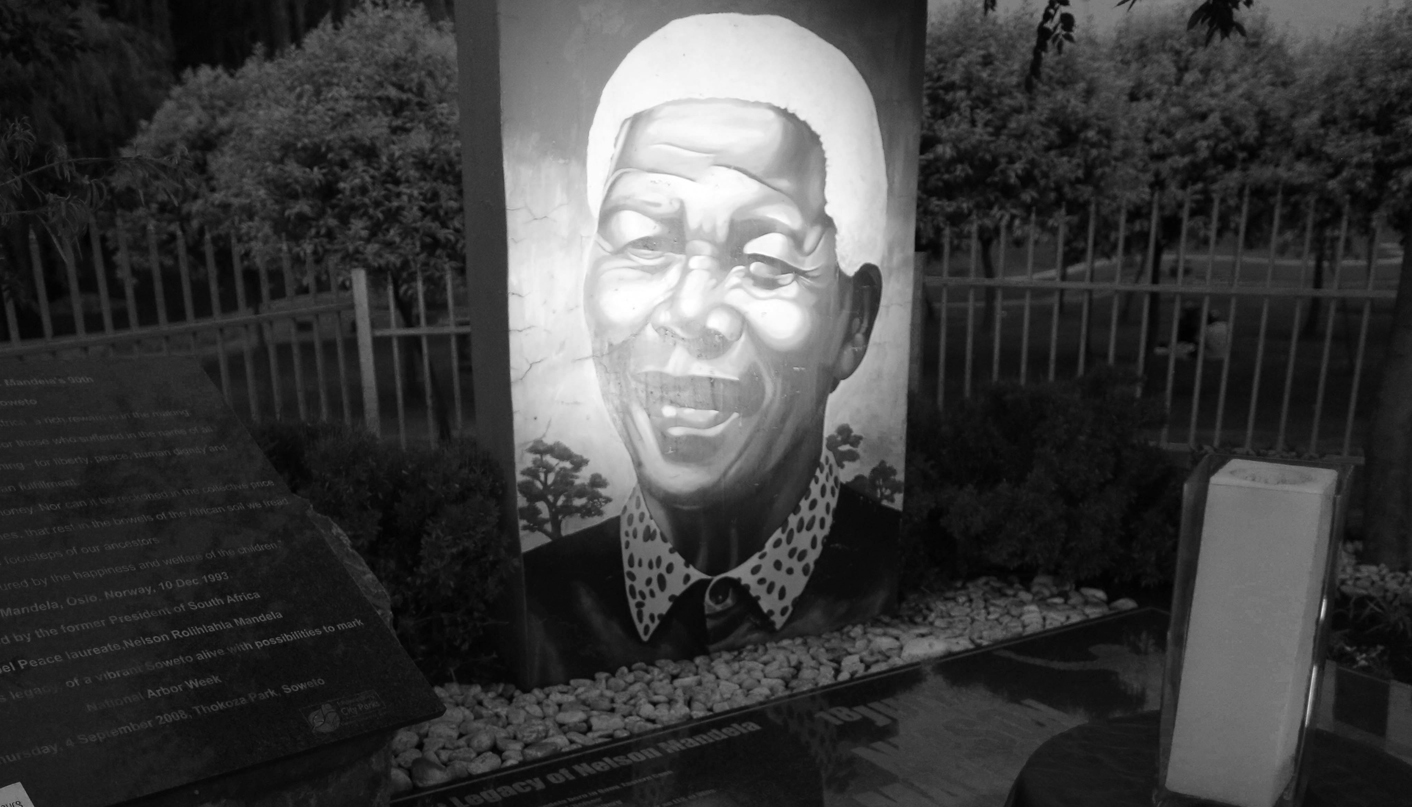 In the tumult of this strange, momentous year, when many of our institutions—democracy, parliament, rule of law—have seemed at best chimerical and at worst a joke, is it not time to begin reconsidering what Mandela left us? By RICHARD POPLAK.

“History and elegy are akin,” writes the poet Anne Carson in Nox, the monumental “notebook of memories” she began compiling after the death of her brother in 2000. The word “history”, she reminds us, is derived from the Greek verb “to ask”. Someone “who asks about things—about their dimensions, weight, location, moods, names, holiness, smell—is an historian.” But this is just the beginning. “It is when you are asking about something that you realize you yourself have survived it, and so you must carry it, or fashion it into a thing that carries itself.” The historian’s job, therefore, is less the dreary task of factual description than it is one of “collecting bits of muteness.” The word “mute” in this context refers “not to silence but to a certain opacity of human being, which likes to show the truth by allowing it to be seen hiding.”

We forge history in the gaps, in the silences. Nelson Mandela, who passed away at his home in Houghton, Johannesburg, exactly one year ago, is particularly generous in this regard. Along with occasional blip of nothingness when he was forced into hiding, he offers his historians 27 years of unbroken silence. We say that he “emerged from prison” in February 1990, a phoenix rising. On this—on the return of a great figure from a place of silence—Carson also has something to say. There was a Greek chronicler named Hekataios who writes of the phoenix. Every 500 years, the creature fashions an egg from myrrh, plugs his father inside it, and bears this sacred package from Arabia to Egypt, placing it at the temple of the sun. Over the course of the flight, the phoenix “comes to see the immensity of the mechanism in which he is caught”, and is “carried backward by the very motion that devours [him], his motion, his asking.”

In other words, history becomes myth, after which myth becomes history. Mandela, of course, went through all this long before his death last year. When he “emerged” from his prison exile, he was reborn, and his people reborn with him. (Carson reminds us that Lazarus, the most famous resurrectee, is often represented in art as a mute). Our own resurrection occurred within certain parameters, and as a collective work it was premised on an endless surging, on going forward. In a strange paradox, our most important historical figure was erasing our history as he nudged and cajoled us into a reconciled future. He conceived for us a Rainbow Nation, in which symbolic acts became major historical milestones. (The 1995 rugby World Cup win the most notable among them.) Somehow, the gestures became grand events, and the grand events gestural. By no fault of his own, and subject to forces beyond his control, Mandela—or the idea of Mandela—began to unmake us.

And we unmade him. The man of action—the man who stated openly that he was willing to die for “freedom”, whatever freedom meant to him at the time—became a ghost-saint without any patrons of his own. This vagueness made him one of the most famous figures on Earth, just as it drained him of his power. Where did he come from? The countryside. When? During a bad time. What did he do? Freed us all from bad men. What did he teach us? It’s a long walk to freedom, but if we persevere, we too will be free.

These terse historical axioms are easy to polish, bedazzle, weaponize. Just last month, an artist named Michael Ellion unveiled an enormous pair of Ray Ban Wayfarers on Cape Town’s Seapoint promenade. He called his sculpture “Perceiving Freedom”, and dedicated it to the “memory” of Mandela. The work offended not because it was shit art, or not only because it was shit art—it reminded us of history’s essential mutability. A single ancient image of Mandela wearing sunglasses, taken against his will on Robben Island by his jailers in order to sell an unreality, was thirty years later repurposed by Ellion to evince a new universal freedom: the freedom to consume without constraint. We often hear that Mandela’s “image” has been co-opted in order to sell this product or that political (non)-ideology, but what we really mean is that our past is subject to endless revision, and therefore doesn’t exist. Carson once wrote that the poet is “provoked by a perception of absence within what others regard as a full and satisfactory present.”

But this is also true of the citizen when he or she feels the floor of the past give way to a present day that is closed off, meaningless.

It has been a strange year.

I won’t bother getting into the specifics, but I think the trends would argue that Mandela evaporates by the day. I don’t mean his standing as a figure worthy of emulation and respect and love. Rather, I’m speaking of the South Africa he hoped to build, in which apartheid’s historical adversaries overcame their differences in order to build a strong, united country.

Here we run into a problem: who were South Africa’s historical adversaries? The further we get from 1994, the more the narrative frays. Mandela believed, or said he believed, that people were intrinsically good, and that the apartheid state was built on a foundation of fear of ignorance. Once those who benefitted from the system were shown that there was nothing to fear, that the swaart gevaar was a fascist construct, and that the only thing they had to give up was their misperceptions, they would submit to a national project much larger than themselves. And in submitting, they would help to slowly invalidate the race-based inequalities that had defined this place for over four centuries.

That was not true, mostly because there was something to fear. In order to become what we were not, things—actual things—had to be sacrificed by those who were previously asked only for intangibles. The belief that everyone would enjoy what apartheid’s white beneficiaries considered their birthright was a lie, because the system under which we lived was, is rigged for zero-sum propositions. We have winners, we have losers, but we have no real middle ground to speak of. In this, Mandela’s political imagination, brilliant at generating symbols and negotiating middle positions, never extended toward the radical. Like many of us, he mistakenly believed that apartheid was the system. In fact, it was how the system expressed itself in this one particular historical context. Destroying apartheid and all its terrible window dressing could never lead to actual transformation, because nothing changed except our political language.

So for those who think of 1994 as a sell out, 2014, the first year we spent without Madiba, has proved something of a watershed. It has never been clearer that apartheid’s winners are post-apartheid’s winners. The election in May delivered a new, viciously combative political environment, and the momentum is now with those who speak in revolution-isms borrowed from other historically decontextualized moments. The institutions Mandela fought so hard to set up and maintain—democracy, parliament, an independent judiciary, the rule of law—are all falling to pieces, and we have no idea how to fix them because we have no idea how or why they were built in the first place. Mandela is now in the throes of a second, posthumous exile, and the arid land in which he wanders offers us no markers and no milestones. This time, his muteness is for keeps.

And yet there is much we have learned in the last year. If true transformation is the simultaneous act of leaning forward while reaching backward, and if it requires pressing against the membranous future while still bearing the whole of the past, then we have yet to make a genuine attempt at change. In Nox, Carson says that history, and therefore elegy, were designed to form “a lock against oblivion”. But she warns that the lock is easily picked. She writes that Herodotus, who invented history, considered it “the strangest thing that humans do”, at once “concrete and indecipherable.” History—creating it, studying it—moves us both closer to ourselves and further away, a bifurcation that is as dizzying as it is deeply strange.

Without these great and beautiful distortions, we are nothing, we are Nox—night. This country is finally engaging in many of the conversations that were forestalled because our leaders believed they would devour us. They were probably right. They might devour us still. But most of us now understand that the old apartheid gave way to a new apartheid, one that that plugs us into systemic global inequalities and injustices—we watch Ferguson burn on TV, and we know what the joint smells like. This new apartheid will need to be overcome in its turn, and the best place to find a battle plan is in our history, far beyond the t-shirts bearing the smiling likeness of Tata Madiba.

This will be hard work. Looking back always is, as Carson’s stark and unsentimental elegy reminds us. Toward the end of her notebook, she includes her brother’s widow’s brief funeral oration, translated from icy Danish:

And now some food for thought.
Yesterday you cannot change.
Today you might alter.
Tomorrow does not give any promise

Note how that final line is punctuated: it has no full stop. It falls off the page, into the open future. DM