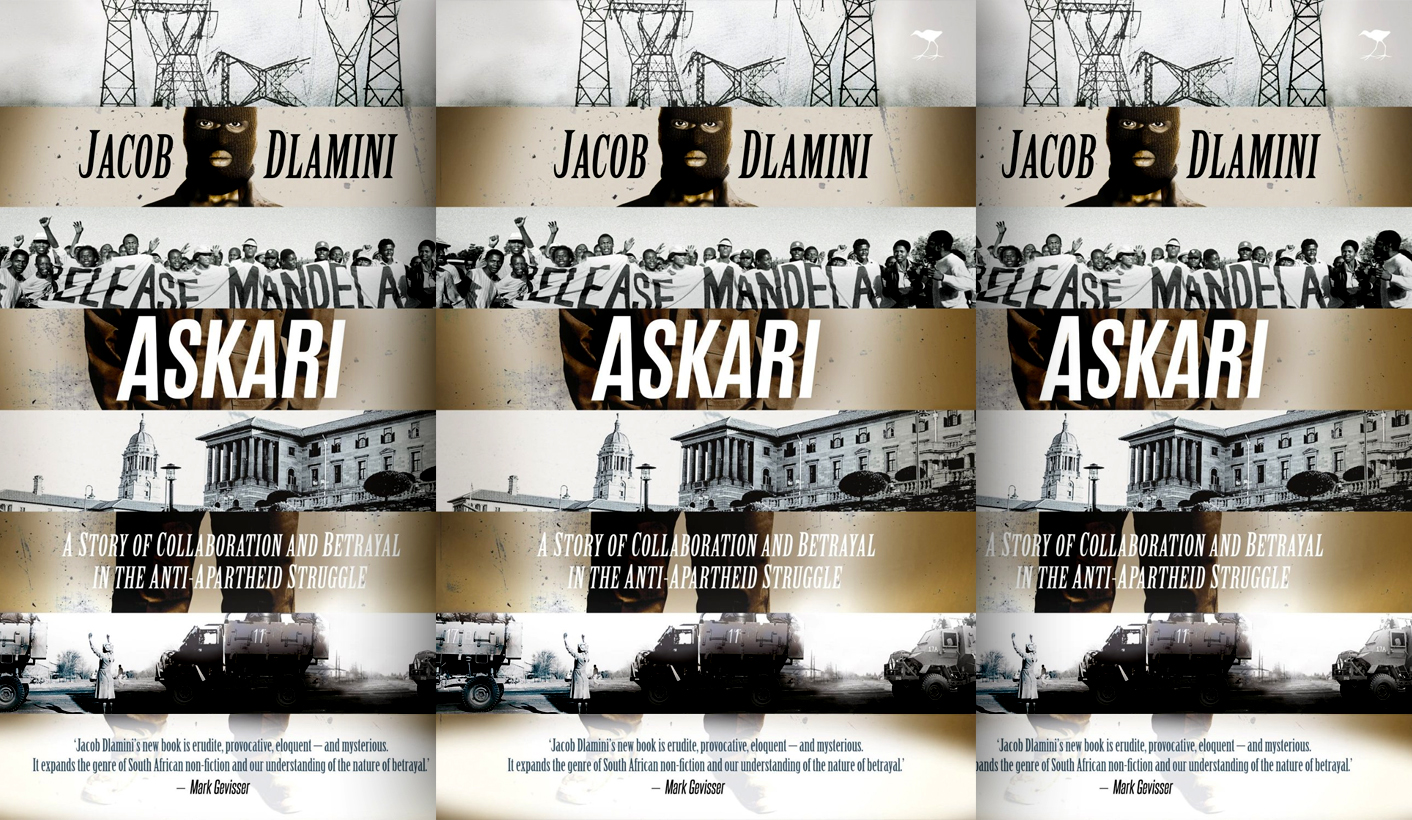 Perhaps it’s a sign of our growing historical distance from Apartheid’s formal structures – though not from its legacies – that our democracy can begin to countenance narratives that destabilise certainty about the identities of perpetrators and victims. Jacob Dlamini’s Askari might be the most intriguing, provocative book you’ll read all year – but its account of betrayal and collaboration under Apartheid is also deeply discomfiting. By REBECCA DAVIS.

Jacob Dlamini is a brave man. His first book, Native Nostalgia, published in 2009, did something many would have considered unthinkable: it presented an affectionate, nostalgic account of his own black childhood under Apartheid. To write fondly of life under that regime, as a member of the group it was designed to oppress, inevitably risks incurring the accusation that you are an Apartheid apologist.

But to denounce the book in that manner would be lazy, a number of prominent critics asserted.

“By arguing that not all aspects of life in townships were hell, Native Nostalgia humanises township residents,” Eusebius McKaiser wrote in a thought-provoking review. “It recognises that township residents have always exhibited complex agencies with which they built and negotiated daily life during Apartheid.”

The “complex agencies” with which black South Africans negotiated Apartheid is the subject of Dlamini’s second book too, though in a very different form. Askari explores the ways in which a number of black people were coerced and co-opted into collaboration with the Apartheid forces.

Only a few pages into Askari, I became seized with one thought: a passionate hope that Dan Roodt and Steve Hofmeyr do not read Dlamini’s book. This is not to say that Dlamini’s book is easily misinterpreted. It is not. He takes pains to explain the ways in which black collaborators with Apartheid were often faced with no real choice at all: to betray their comrades or be killed; to betray their comrades or have their families killed; to be tortured until they succumbed to betrayal.

But there is no denying that the subject is a complex and provocative one, particularly at a time when Apartheid denialism appears to be on the rise. Right-wing racists may well leap on the book as vindication of their view that black South Africans were willingly complicit in both the formation and maintenance of the Apartheid system. To read it in this way would be astonishingly intellectually dishonest, but it is predictable that there will be those who choose to distort its meaning in this way.

Let’s concede, too, that this story of black collaboration and betrayal in Apartheid would inevitably be construed very differently from the pen of a white writer. His or her motives in undertaking this project would be scrutinised far more keenly, for obvious reasons. Even as it is, one imagines that there are members of the ruling party in particular who will condemn Dlamini’s book – despite the fact that its takeaway message is a profound indictment of the Apartheid system and the impossible roles it forced on ordinary people.

But it still makes for deeply unsettling reading, subverting the neat binaries of South African history.

“In truth, political conflict in South Africa has always been a racially promiscuous affair,” Dlamini writes. “For a country with a reputation for a Manichean view of politics, South Africa has produced a wide range of collaborators, double agents, izimpimpi (Nguni for spies or traitors) and turncoats throughout its history.”

It was not just Apartheid that bred acts of treachery. There were traitors, Dlamini reminds us, in the earliest clashes between black South Africans and European settlers; there were Afrikaner verraaiers and ‘Judas Boers’ in the wars against the English.

Widening the lens, he writes of complicity in other repressive regimes throughout global history: from what Jean-Paul Sartre termed the instinctive “humanitarian helpfulness” Parisians showed their German occupiers during the Second World War, to more dramatic acts of collaboration. Dlamini cites the case of Stella Kübler, a German Jewish woman who betrayed fellow Jews in order to win the safety of her parents. She turned over between 600 and 3,000 Jews to the Nazi authorities; they killed her parents anyway.

The project Dlamini has undertaken in Askari – to examine the motivations of those who collaborated with the Apartheid regime without seeming to legitimate their actions – is a significantly difficult one. It is not clear that any answers he reaches could ever be fully satisfying, as Dlamini acknowledges. But if anyone is up to the job, it might be Dlamini. As an academic of international stature, currently based at Harvard, he meshes meticulous research and impressively broad scholarship with an approach that manages to be simultaneously dispassionate and affectingly human.

The overwhelming question the book grapples with is, Could any of us betray, under certain circumstances? Dlamini gives examples of many who did not: anti-Apartheid activists captured by the police who refused to renounce the ANC and were killed. But how can we ever be certain of the strength of our convictions until our lives are at stake? Dlamini makes it clear that he’s not here to sit in simplistic judgment. He opens the book by recounting his own small acts of traitorousness as a child; ratting out classmates who hadn’t studied for an exam, for instance.

The focal point of Askari is the story of one askari in particular: a Struggle activist called Glory Sedibe, dubbed Comrade September by his fellow MK fighters. Sedibe died in ambiguous circumstances in 1994. Were he alive, the book could almost certainly not have been written. Most of the other Apartheid turncoats Dlamini interviews or writes about have to be cloaked in anonymity. There are intriguing hints at certain current political figures who Dlamini understands to have operated as double agents. When Sedibe died in 1994, he was allegedly hoping to return to the ANC fold.

The full extent of collaboration is impossible to establish. Dlamini records that in 1993, the National Intelligence Service destroyed 44 tons of files, microfilm, tapes and computer disks. When Nelson Mandela was inaugurated as president in 1994, one version of the story has it that he asked Apartheid’s last Intelligence head, Niel Barnard, to reveal the names of all government spies in the ANC ranks, and Barnard refused. But the other version holds that it was the ANC who refused to swap the names of spies in their ranks with the government.

“The truth is that outed collaborators such as Sedibe and [novelist Mark] Behr were more the exception than the norm,” Dlamini writes. “There were a great many collaborators, and we know much less about them than we should.”

It was Apartheid’s ‘Prime Evil’ – Eugene de Kock – who abducted Sedibe and “turned” him. Sedibe’s “defection” – and the book makes it clear just how contested that term can be – was thought to be the most significant loss of its kind to the ANC, because his relative seniority meant that he had valuable information to spill. Sedibe’s own brother spent time on Robben Island.

Those who knew Sedibe from the Struggle spoke to Dlamini of him with contempt, as a traitor, a rat, a man whose basic weakness would always make him especially susceptible in the face of torture. He was a big drinker. Dlamini records that this was something common to Apartheid turncoats. Many turned to alcohol and drugs after defection to obliterate their guilt and shame.

Others were abusive to women. The Apartheid death squad at Vlakplaas, which was originally an all-black unit, had in its ranks a man who killed no less than two of his girlfriends. While commander Dirk Coetzee was trying to ‘disappear’ the first crime, the second happened. De Kock said that discipline at Vlakplaas was so bad that when he arrived he called it ‘Kakplaas’.

“It would be easy to take Sedibe the askari and freeze him proverbially in the ninth and last circle of the inferno, which Dante reserved specially for traitors, the ‘misbegotten rabble of all rabble’,” Dlamini writes. “But condemning Sedibe to hell would offer no insights; seeing him in only one guise as a traitor would leave us with a warped view of the man. This is because Sedibe was more than the sum of his treachery.”

When De Kock testified in front of the Truth and Reconciliation Commission about the abduction of Sedibe, he said, “Mr Sedibe would today have been either the head of the army or head of the defence force or the minister of defence. So in a sense we not only destroyed his life, we also left his family with a handful of ashes.”

De Kock continued, “We interfered with one of the best persons available to us in the country and this is one of the things which still affects me today.”

Many will be suspicious of De Kock’s contrition, but his words cast the tragedy of Sedibe’s story into stark relief. And it is a tragedy. There is no neat narrative at hand in Askari to reassure us that Sedibe and his ilk were anomalous figures of evil.

“True, Sedibe’s is but one story,” Dlamini writes. “But it complicates how we think about Apartheid and its legacies, and reminds us of the stories that still refuse to be told. As a nation, we would do well to examine the taboos, the secrets and the disavowals at the core of our collective memories.” DM