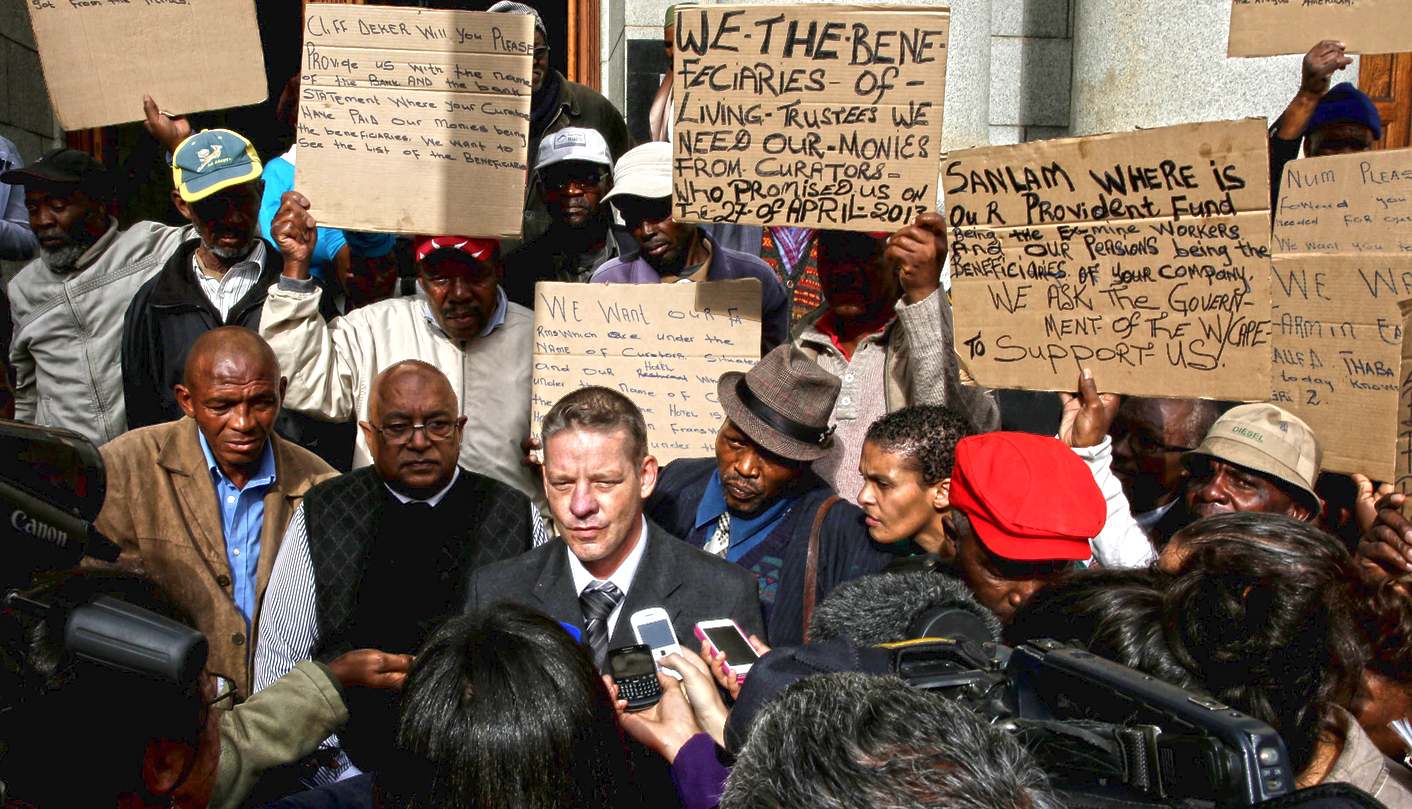 Luck appears to have run out for J Arthur Brown, the fraudster who was at the wheel while R1,4 billion disappeared from funds administered by his firm Fidentia, but who initially got away with only a R150,000 fine and a suspended sentence. On Monday, the Supreme Court of Appeal sentenced Brown to 15 years in jail – and said that the judge who heard the original case was “deserving of censure”. It’s been a messy business all round. By REBECCA DAVIS.

In May last year, J Arthur Brown walked out of the Western Cape High Court with a fine of R150,000. On condition that he not be convicted of fraud for four years, he would not spend any time behind bars at all.

It was a stunning outcome for a man who had presided over a firm which saw more than R1 billion go missing from a trust which paid money to the widows and orphans of mineworkers.

There were 54,000 trusts involved altogether in the Fidentia scandal, as well as collateral damage: the Boland Rugby Union applied for liquidation in 2007, for instance, after the collapse of Fidentia meant the loss of their multimillion-rand sponsor.  Brown originally faced 192 charges.

Two of the junior parties in Fidentia, the firm’s financial director and broker, were sentenced to seven-year jail terms after striking a plea bargain (and, in one case, having to be extradited from the US). They were released after less than three years.

After Brown’s eventual conviction on just two counts of fraud, he launched a campaign to place the blame for Fidentia’s downfall on the Financial Services Board and the curators of Fidentia, after the firm was placed under curatorship. Brown claimed that the true villains of the case were Dines Gihwala and George Papadakis, appointed as curators in 2007. Up until the curatorship, he alleged, Fidentia had been able to cover its liabilities.

Leaving court as a free man last year, Brown said his priority would be getting investors’ money back.

“The court has given me an opportunity to rectify this thing and I will use every waking hour to do so,” Brown told journalists.

Shortly afterwards, the Daily Maverick attended a strange meeting held between Brown and individuals who had lost money through Fidentia. None of them were there to berate Brown. They had all bought the story that it was Fidentia’s curators who had lost them the payments earmarked for school fees, funerals and retirement.

“The reason we support him is that Mr Brown tried to pay us but the curators took the money,” one said. “We decided to support Mr Brown because he is not guilty at all. Now we plan to open the case against the curators.”

In 2011 legal action had already been taken against the curators, alleging that they were disposing of Fidentia’s assets “for considerably less than their value”, and failing to provide relevant information.

The judgment described the application as “vexatious, reckless or an abuse of the process of court”.

Noseweek magazine subsequently accused Fidentia curator Papadakis of having “stolen” over R9 million from Fidentia in fees – an allegation denied by Papadakis.

In July this year, the other Fidentia curator, Dines Gihwala unexpectedly resigned. A brief statement on the matter announced that on the day of Gihwala’s resignation, the Financial Services Board had “become aware of a decision handed down by the high court which contained adverse findings against Mr Gihwala”. Later reports indicated that the Western Cape High Court had found Gihwala to be a “delinquent director”.

Papadakis stayed on as curator, joined by attorney John Levin in September.

At the time of Gihwala’s resignation in July 2014, the Financial Services Board said that Fidentia was approaching liquidation, with R319 million of its funds having been disbursed to beneficiaries.

Brown’s original court case saw legal proceedings postponed 16 times, thanks to various delaying tactics. The National Prosecuting Authority came in for strong criticism over its handling of the case, seen as evidence of the state’s inability to assiduously prosecute commercial crime. Western Cape High Court Judge Anton Veldhuizen asked why Financial Services Board CFO Dawood Seedat was only called to give highly damning testimony in aggravation of Brown’s sentence, for instance, and not before the verdict.

But the Supreme Court of Appeal’s Monday ruling singled out Judge Veldhuizen for rebuke too.

The SCA hearing into the Brown matter was presided over by Judge Mahomed Navsa and four other judges. The judgment condemned not only Brown’s actions, but also the attitude of Veldhuizen in the original case, stating that Veldhuizen had seemingly “repeatedly” sought “to excuse [Brown’s actions].”

The judges also criticised the fact that Veldhuizen had not adhered to the minimum sentence for financial crimes which involve amounts above R500,000: 15 years’ imprisonment. Veldhuizen took into account aspects like the fact that “Brown had been scorned by his friends and the public at large and even by his church”.

Brown and his cohorts were described in the judgment as being “at the very least gung-ho” in their approach to investor funds, ignoring “the most basic regulatory rules”, and lying about their qualifications – Brown had claimed to have a B.Comm degree.

“It is apparent from Brown’s testimony that he continuously downplayed and minimised his moral and legal blameworthiness,” the judges wrote.

Reacting to Monday’s Supreme Court decision, the executive officer of the Financial Services Board, Dube Tshidi, said that Brown’s previous sentence “simply did not acknowledge the severity of Brown’s crime and the significant impact his actions had on thousands of poor South Africans”.

Cosatu’s Western Cape provincial secretary Tony Ehrenreich said that the sentence should “serve as a clear indication to fund managers that they are going to be put in jail for corruption and for stealing from the poor”.

Put in jail, rather than appointed as chair of PetroSA – as was the case a fortnight ago, when Tshepo Kgadima’s appointment to head the state oil company was followed by allegations that he had swindled more than 250 investors out of their money. Former government minister and ex-ambassador to the UK Zola Skweyiya claims to have lost R1 million of his pension money to Kgadima’s scheme.

Skweyiya “is learning the hard way that our government has become unresponsive to the plight of savers fraudulently dispossessed,” wrote Intellidex’s Stuart Theobald in Business Day last week.

“Who knows how many scams are on the boil right now? It is more than would be the case if police acted decisively and prosecutors were rigorous.” DM

Anton Lubowski memorial lecture: Let’s not betray the ideals of those who fought for freedom

No Rhyme, No Reason: The not-quite extinct limericks that underscore the decline of endangered species