HIV, TAC and the struggle for life 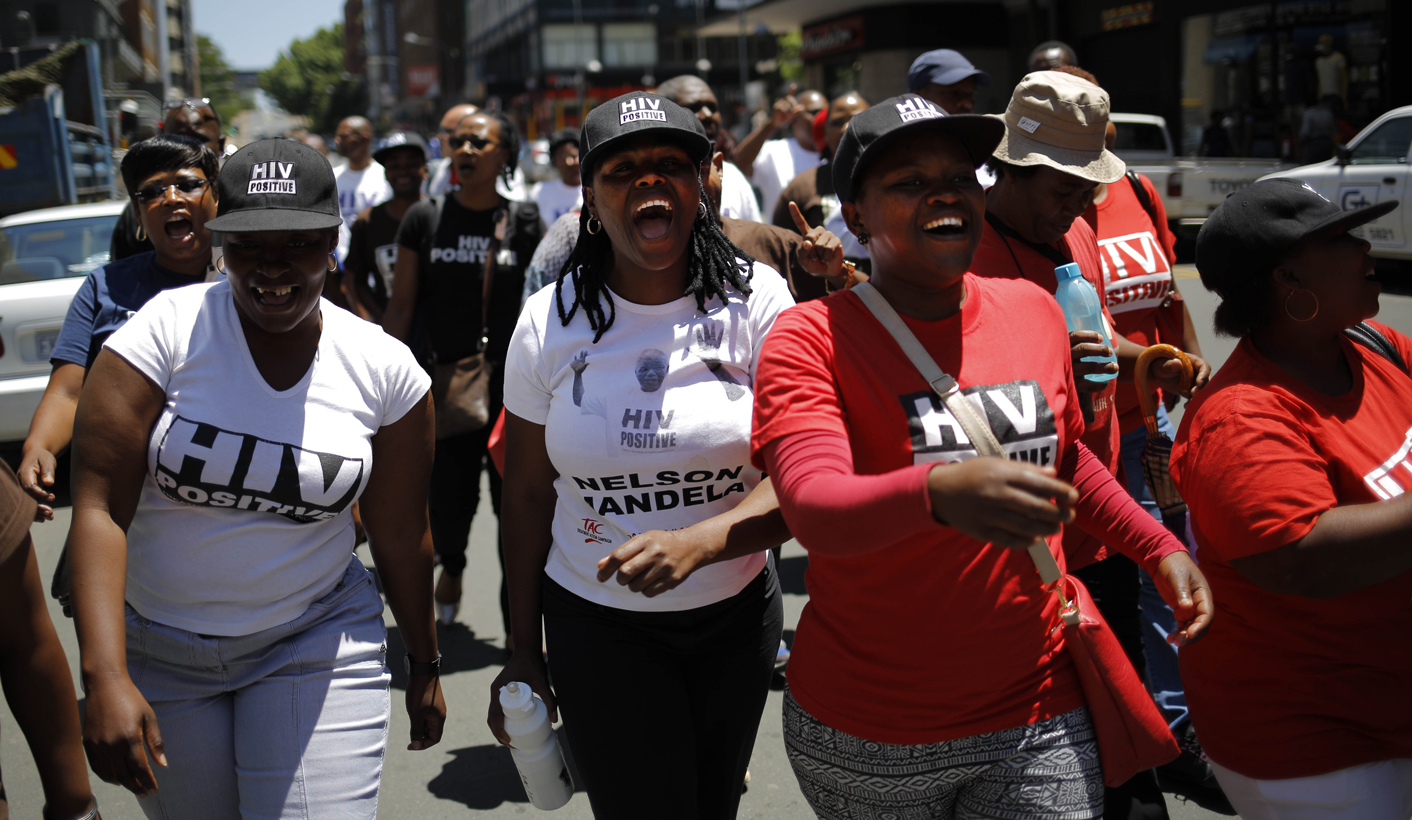 To mark World Aids Day, the Treatment Action Campaign (TAC) held a reunion on Monday to honour how far we've come in the fight against HIV/AIDS and remind how far there is to go. In this struggle, the enemy might not be as clear but the fight for life continues and TAC is an integral voice. By GREG NICOLSON.

seriously ill were encouraged to create memory boxes
she was crying uncontrollably, crouching on the floor of the house of a relative in Sharpeville
baby died nine months later because there was no treatment
who I watched die, tears in her eyes

South Africans did not rest inert
We challenged them.
hopefully the genocide was now over

Each of these lines come from a different contributor who fought to reduce the impact of HIV/AIDS in South Africa to a new book released by the TAC on Monday, + Ten Years of ARVs in South Africa, which was handed out at Johannesburg’s Orbit jazz club. Posters – “Produce generic antiretrival, now!”, “President Mbeki, health for all… Fire Manto” – hung on the walls. T-shirts were pegged across the room: “End HIV discrimination in SANDF”, “Hambe Kahle Madiba. You stood up for our lives”, “Aids what’s going on”, and “HIV positive”.

The event marking World Aids Day and 10 years of state-provided antiretrovirals (ARVs) was addressed by speakers such as Constitutional Court Justice Edwin Cameron, Pieter-Dirk Uys, activists and healthcare professionals who have dedicated their lives to promoting the prevention and treatment of HIV, with a video from Desmond Tutu.

It was clear both the current fight against the epidemic and the TAC’s battle for funding epitomises the struggle. The struggle after The Struggle: life in a democracy.

Nkandla, perhaps the Arms Deal, might take the headlines, but the period of denialism that blocked HIV-positive South Africans from receiving treatment is the most abhorrent stain since 1994. The number of deaths doesn’t do justice to the epidemic. Families were ruptured and for many the damage will never be repaired. A generation, scarred and underprivileged by Apartheid, was lumped with further loss: of love, life, finances, opportunities and health.

“The Apartheid government killed people, that’s no lie. The new government just left them to die,” said the satirist Uys.

That’s changed. Professor Ashraf Coovadia has long been in the fight. “It is a sign of just how much has changed in 10 years when I have to explain to medical students what the signs and symptoms of paediatric HIV are and how to spot these,” said the paediatrician, who spoke on Monday. “Five years ago the students knew all the complications and hardly required a lecture on this, and 10 years ago they were all virtually experts on this disease as it was so rampant. Our paediatric wards in 2004 were more than half-filled with HIV-infected children and often dying children, mostly infants.”

Now, that’s rare. The finally state rolled out free ARV treatment in 2004 and South Africa now has the biggest HIV treatment programme in the world, with a reported 2.7 million people initiated on treatment. Mother-to-child transmission of HIV has dropped to minuscule, levels meaning HIV-positive women have largely regained their right to have children. While the state was forced to act as activists challenged former president Thabo Mbeki, the gains have been felt under Jacob Zuma and Health Minister Aaron Motsoaledi. In the 10 years to 2012, South African life expectancy jumped from 52 to 62.

It’s a good story. Shit, it’s a great story. Fewer families are being torn apart. Fewer babies are dying. But as the fight against inequality and poverty proves, the struggle doesn’t end when the heroes prevail over evil. It gets more complicated.

South Africa still sees 400,000 new HIV infections every year and 170,000 AIDS-related deaths. There are 88,000 people dying of tuberculosis (TB) annually and drug-resistant TB is a growing epidemic. “We’ve got a very, very long way to go,” said Coovadia. Justice Cameron pointed out how the systems of privilege, stigma and power have been confronted, but still pose challenges. Young women account for a quarter of the more than 1,000 new HIV infections that happen every day in SA.

After Monday’s event, TAC activist Portia Serote explained the problems on the ground. Wearing an “HIV Positive” cap and t-shirt, Serote, who recently took on Minister Motsoaledi at a TB conference in Spain, is HIV positive. Two days after her diagnosis in 2004, the TAC launched a branch in Daveyton. Serote saw people flocking to a new mall instead of engaging about HIV and decided to join the launch. She has only ever had one sexual partner, and by telling her story to passers-by, she got many people to get tested, she said.

Clinics remain a problem. At the forefront of HIV testing and treatment, Serote said the clinics in her area were understaffed and short of medication. Deciding whether to go to work or spend a whole day at the clinic, many people choose work to put food on the table. “All the minister is doing is putting people in treatment without looking at the other aspects,” she said. Travel costs to access treatment, the side effects of the drugs, poor attitude of staff at clinics, stigma, and drug stock-outs inhibit treatment and continue to prevent testing.

“Hence the viral loads of many people who are initiated on treatment are not [becoming] undetectable,” said Serote. Earlier this year, Motsoaledi admitted to the problems in keeping people on treatment. Of patients that start on ARVs, 37% are lost to follow-up three years later and less than 40% of those on treatment are known to be virally suppressed, when very low levels of HIV are detectable.

Speaking at the state’s official World AIDS Day event in Welkom on Monday, which TAC said they would not attend because of the high costs that could be better spent, Deputy President Cyril Ramaphosa focused on the need to put community voices at the centre of the state’s response.

“We need to place community voices at the centre of our response. We need to do more to involve, capacitate and support civil society. Despite the advances we have made in the fight against HIV and AIDS, stigma and discrimination still persist. This can have a devastating effect on the lives of people living with HIV and on those closest to them. It also undermines our efforts to tackle the epidemic. People are reluctant to test for HIV, to disclose their status, or to access treatment, care and support,” said Ramaphosa.

The key community voice in the fight against HIV is TAC. The gains made in the last decade can directly be linked to their activism. While the struggle has turned to implementation of policy, TAC activists are now the voice of patients in a system that often denies healthcare users, particularly poor and black, avenues to challenge the “good story”.

“TAC members are the ones who are monitoring when the department makes promises,” said Section27’s Sasha Stevenson after the group helped secure a meeting with the Eastern Cape health MEC last week. TAC’s activism goes beyond national campaigns and provides education to communities, information to partner organisations, and accountability at the local and provincial level. It works on a broad range of healthcare issues.

But the organisation’s future remains in jeopardy. TAC has been struggling to raise funds for an operational budget of R35 million next year. It secured almost R2 million from donations in a November, far below its target of R10 million for the month. To continue with its programmes – TAC has almost 200 branches and 8,000 volunteers – it needs around R25 million more, but it is close to securing R10 million from a large donor.

“I am fearful of what would happen in a world that doesn’t have this civil society action. In a heartbeat we can go back,” said Coovadia. “Without activist monitoring, the South African AIDS response could go into reverse. Precious gains could be lost. Poor adherence, loss to follow up and medicine stock-outs could go unreported,” said an open letter from 65 health professionals from around the world, including a Nobel laureate. UNAIDS director Michele Sidibe simply said, “The world needs the Treatment Action Campaign, now more than ever.”

While the organisation faces potential closure, the struggle is far from done. Some of the great enemies of liberation and the right to life have been defeated, but the challenges persist as we attempt to turn paper policies into reality. TAC symbolises this ongoing fight that occurs every day in communities. We need civil society organisations and activists on the ground, because despite the advances made in healthcare, the struggle continues, for life. DM

Photo: Activists march during a Treatment Action Campaign (TAC) event during a World Aids Day event in downtown Johannesburg, South Africa, 01 December 2014. South Africa is one of the worst affected areas of the world with regard to HIV and Aids. EPA/KIM LUDBROOK