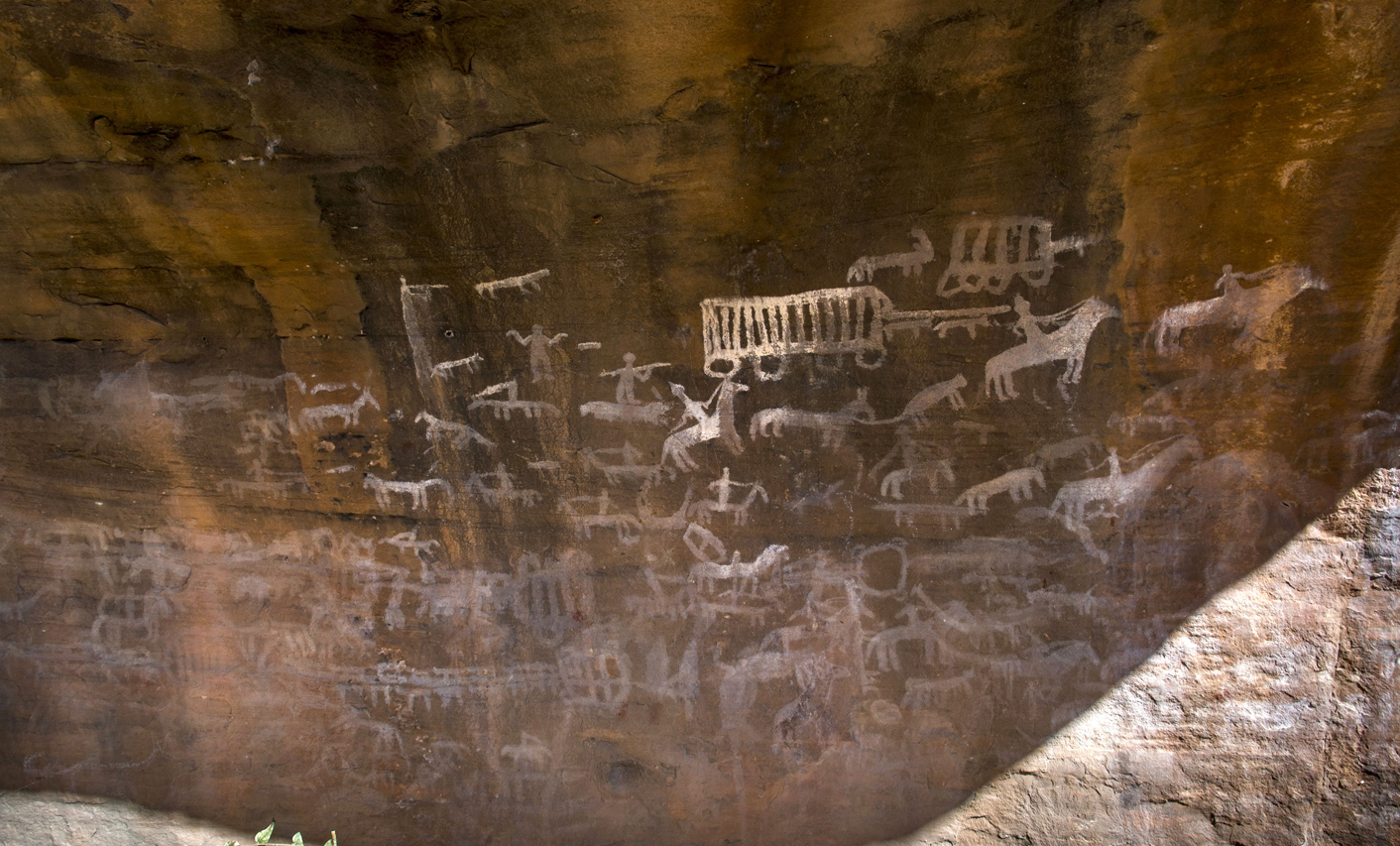 A small mining company has made a rich new find, writes GREG MARINOVICH, but this may endanger one of South Africa’s most remarkable rock art and cultural heritage sites. Perhaps a new pattern of business needs to be forged here.

A Canadian mining company, Platinum Group Metals Ltd., has announced that they have discovered platinum, gold and palladium in a uniquely rich mixa below the Makgabeng plateau in Limpopo Province.

Their assay results have shown the mix of precious metals to be 50% Palladium, 30% platinum and a whopping 20% gold.

This kind of metal basket ensures that they might well be able to ride out the vagaries of the market better than the usual platinum mines, which have a far lower percentage of gold in their ore body.

Those kinds of numbers make mining companies and their investors in three-piece suits dance like students at a free beer party. That said, it is still several years until mining actually starts.

Of course, any discovery of this kind is good news for the country’s coffers too. Taxes, royalties, development, employment, associated businesses and services.

Except for one conundrum: what is good for the investor is not always so good for the flow of benefits to the citizenry. That the ore may be mechanically mined means that there will be far fewer jobs in comparison to the more traditional hard rock mines. Platinum Group Metals estimates that they will provide no more than 2,200 jobs at full production.

The Makgabeng find is also different in that it has a much higher proportion of palladium, so we are not exactly comparing oranges with oranges. What is routinely referred to in mining shorthand as a platinum mine actually mines several different metals usually found together – the so-called platinum group metals.

The company vice president for corporate development, Kris Begic, said in an email: “At 655,000 ounces in aggregate, Waterberg would be a significant PGM mine on par with the big three. Palladium has significantly outperformed platinum with global auto sales now heavily geared to gasoline – autocatalysis in gasoline is now 100% palladium reliant.” (The big three are Amplats, Implats and Lonmin.)

With that kind of scenario, it is a given that these fewer workers will get considerably higher wages than their counterparts, which hopefully will help drive salaries throughout the industry to a higher level. On the other hand, the low salaries of workers in the platinum sector might drag down the salaries of workers at the new venture. The outcome remains to be seen.

Those low labour needs and the ability to mine mechanically might well make it South Africa’s cheapest platinum group metal mining operation.

So who, besides shareholders, will benefit? A lower wage bill means fewer taxes. Fewer employees means that the usual entourage of informal business people, labourers and family members who are attracted to mining operations will be limited – for better and for worse – but fewer people will eat per ounce of metal mined.

Also, the lower the costs of production generally, the less money circulates: so employing fewer workers means there will be fewer spaza stores, grocery stores, banks, furniture stores, and so on.

It might be hoped that greater profit for the mining house and investors would see more company and income tax flowing to the state coffers, but the consistent tendency in this age of goal capital is to aggressively minimise their tax burden.

Counter-intuitively, there is a possibility that the more expensive the mining, the less likely there are to be spin-off benefits to the state and surrounding communities.

In many ways, the Waterberg mine epitomises the possible curse of natural resources – a treasure chest below the surface in an underdeveloped area that can be ripped out at relatively low cost leads to a boon for investors, the mining company and a well-connected local elite.

Not all the downsides of the resource curse can be laid at the door of foreign mining firms (and their local subsidiaries); the buck stops at the door of the state, who control the terms of the mining licenses granted.

South Africa is unlike, for example, the Democratic Republic of Congo, where state coffers are blatantly bled dry by the political and military elite. Here, it is less brazen, and money is siphoned off to myriad superficially legal schemes and ‘legitimate’ forms of patronage, as well as being used correctly. And, unlike the example of the DRC, the South African state does indeed deliver a fair percentage of needed services to its citizens.

Taking the glass-half-full approach, more profit and a healthy business means the state will get royalties and taxes, and can use that to invest in services for its citizenry, from potable water and electricity to affordable, quality education and health services.

The new mine that is exciting the company is north of Mokopane (formerly Potgietersrus), and along the so-called North Limb of the Bushveld igneous complex, which has been so generous with precious metals.

There have been some platinum finds farther south, but it seems no-one has thought to prospect this far north. And this is where an entirely different concern comes into play.

The company website shows a map of where hundreds of narrow boreholes drilled into the sandy gully are carved by the little river that splits the plateau. This also happens to be a hotspot of thousands of years of cultural practice, from initiation schools to cult sites.

The remote vastness of the plateau is also where the Hananwa people sought refuge from slavery following a disastrous war waged against them by the Boers in 1894. Despite fierce resistance, they were defeated. Some Hananwa managed to escape the siege of their mountaintop refuge on Blouberg, and escaped south to desiccated Makgabeng plateau. In hiding, they painted the story of their war and loss on the cave walls, often alongside or even over much older Khoi and Khoisan artwork and ritual markings.

The plateau, under which the ore lies, might be familiar to our readers from last year.

Currently, this cultural treasure trove is not protected at all, despite its unique qualities as a national, and international, heritage site. The state has entirely failed to put in place any measures to incentivise its protection, or encourage tourism. (Placing monetary value on the sites through tourism would encourage their protection.)

The area, like most of the former homelands, is impoverished and offers extremely few employment or entrepreneurial opportunities beyond bottle stores, spaza shops and the taxi business. The Waterberg mine could be a lifeline.

Russia and South Africa met in Pretoria this month to discuss the worrying drop in platinum group metal prices. They have scheduled a conference for 2015, where they will discuss how to stabilise the price – most likely they will examine the possibility of a cartel-like arrangement to control the supply side and keep prices high.

The traditional mining houses are beset by costs rising above the inflation rate, and relatively low metal prices. The cost they seem to complain most about is labour, and over the last couple of years, the rising cost and volatility of labour has had an impact.

Even the largest platinum miner, Amplats, has been trying to hive off or even close various marginal mines, with the potential loss of tens of thousands of jobs. And while number two producer, Impala, seems stable, Lonmin seems perpetually on the brink of financial crisis.

While the platinum industry at large is under some pressure, there is certainly scope for a company mining a potentially very profitable claim to protect and promote the rich cultural heritage of the area they will be mining in. With that in mind, let’s look more closely at Platinum Group Metals Ltd.

In looking at this mining company and their partners, we find that the Waterberg Extension interests are owned 74% by Platinum Group Metals directly and a further 26% by its black economic empowerment partner, Mnombo Wethu Consultants Pty Ltd. Just under half of Mnombo is, in turn, held by Platinum Group metals, increasing the Canadian miner’s share of the mine ownership to 49.9%.

The Canadian company is developing another platinum mine, to the west of Rustenburg.

Of concern is that Platinum Group Metals appears not to be committed to long-term mining in South Africa. President CEO Michael Jones, in a company video, said, “(Our ultimate success) is about primary math. If the best return on our shareholder investment is to produce platinum and get the return on the metal, that’s what we [are] going to do. If somebody comes over the top with a bid that’s the best return for our shareholders, the company is gone in two weeks.”

That said, the company, in an e-mail from Begic, stated, “We are interested in working with you and other interested parties on this matter to ensure these areas are not disturbed. To date we have not encountered any rock paintings or heritage sites during our exploration activities… In the future, once exploration activities are complete, we do not anticipate any significant mining or other activity on the plateau or its cliff faces and immediate area.”

There is scope here for a mining company and its partners to initiate a unique protection project. Platinum Group Metals could use its resources to incubate and grow a heritage project that involves local community members, like those working with Jona Ngoako, as well as the Wits University archaeologists already dedicated to documenting the unique human heritage sites.

This would be a simple accomplishment for the mine, and a great service would be rendered to South Africa, and the world. It would be something else for those investors to dance about, and we would be pleased to join them. DM