Analysis: Government’s 16 Days of Activism could do with less prayer and more money 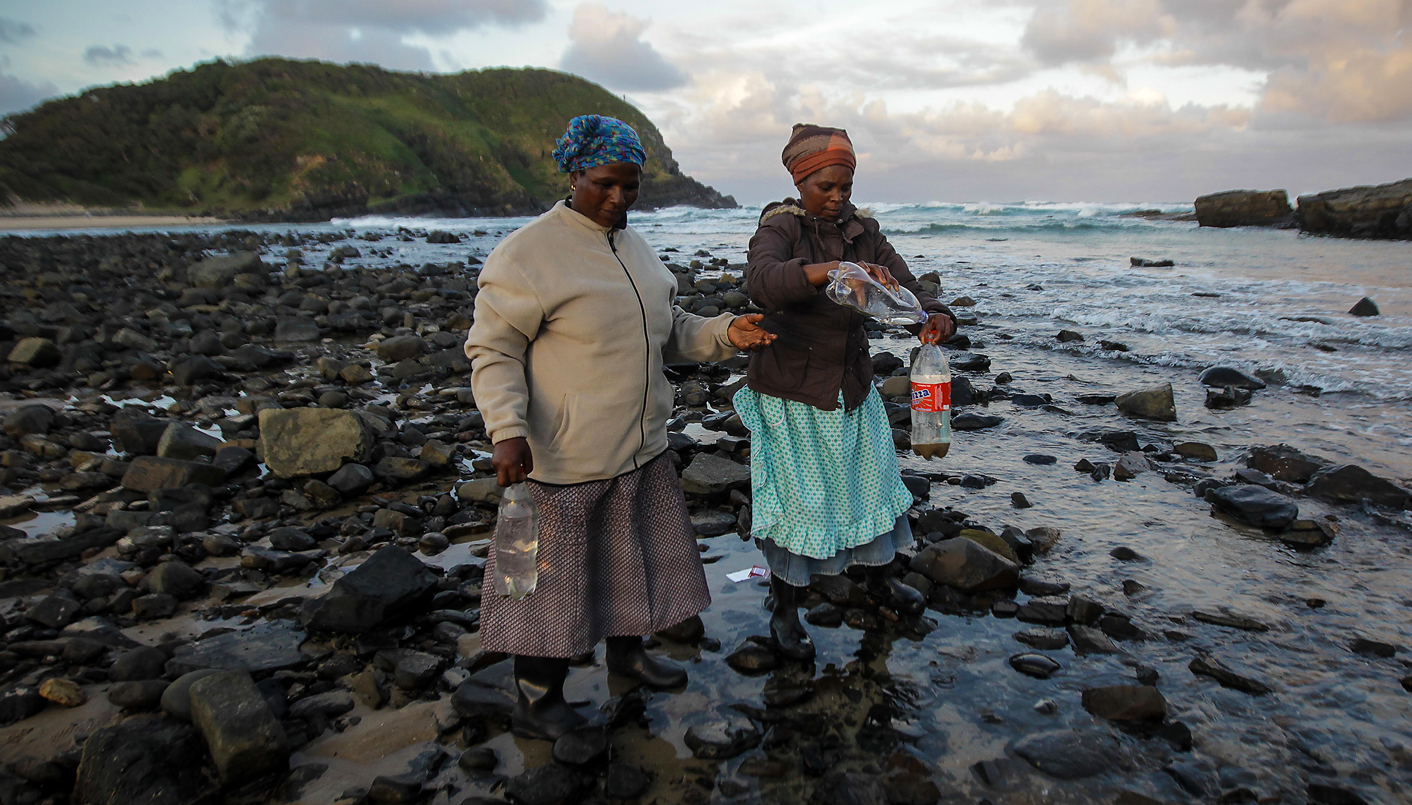 This is the 15th year in which South Africa has taken part in the 16 Days of Activism for No Violence Against Women and Children campaign. Though it’s a worldwide initiative, there can be few places which need it more than South Africa – yet the government’s plans for the period are less than inspiring. Is it a sign that they’re simply out of ideas as to how to tackle the ongoing tidal wave of gender-based violence? By REBECCA DAVIS.

In Pretoria on Monday, a man appeared in court charged with raping and killing his lover’s eight-year-old daughter because her mother “refused to let him perform rituals for our newborn child”. On the same day, news broke in Cape Town of a brutal assault on a 52-year-old female cleaner, allegedly by a group of male UCT students.

Last week Gert Waterwand, of Campbell, Northern Cape, was sentenced to life in jail for having murdered 53-year old Katty Johannes in October last year after raping her with an accomplice in front of her eight-year old daughter.

On 17 November a 27-year-old man from Limpopo appeared in court after being charged with the rape of his own 82-year-old grandmother, with whom he lived.

Ten days ago, a 23-year-old Grahamstown man was sentenced to six life terms after being convicted of four rapes, three murders, and attempting to have sex with the corpse of one of his victims.

On 10 November, the body of nine-year-old Bonang Bridgette Selai was found dumped near Sebokeng, with her hands tied and masking tape covering her mouth.

The 24-year-old Sarah van Wyk was found dead outside Kuruman two weeks ago, with a nappy stuffed into her mouth and a broken beer bottle in her vagina. Health-e News reported her story just as the 16 Days of Activism were set to begin, with President Jacob Zuma scheduled to launch this year’s initiative in Ekurhuleni on Tuesday.

These recent crimes represent, as ever, only a tiny fraction of the total picture of violence continuing to darken – or end – the lives of South African women and children.

In the face of the scale of the problem, it is easy to express cynicism towards the 16 Days project, given its circumscribed timeframe – though government stresses that this is merely one element of a year-long project. What is additionally frustrating, however, is some of the strange language and thinking on display about the issue of gender-based violence (GBV) from the country’s most powerful political figures.

In Parliament last Friday, Susan Shabangu, Minister in The Presidency for women, said: “Imagine living in a society where we no longer read or hear about the abuse that women and children often suffer at the hands of heartless perpetrators.”

Maybe next year their slogan could be: “Have a heart – don’t rape a woman.”

When the issue of GBV is discussed by senior government leaders, there is a tendency to present it as if it is perpetrated in a vacuum by isolated evil individuals. This leads to the kind of official rhetoric we’ve seen increasingly over the past years, where the solution to GBV is presented simplistically as a return to “morals” – almost invariably a religious Christian morality.

In the government’s programme of events for the 16 Days, no less than three out of 14 official events constitute some form of prayer gathering. For example, 6 December 2014 is set aside as National Prayer Day, for “women and children from all walks including sex workers [and] abused women” – a highly problematic phrasing, suggesting that sex workers and abused women would not ordinarily fall within the category of normal women.

The purpose of the event is “to show them that South Africa cares”.

Beyond the National Prayer Day, the government is requesting provinces “to facilitate provincial prayers” in remembrance of “all victims who died as a result of VAW&C [violence against women and children] and the surviving victims of VAW&C and those who continue to live with VAW&C”.

In a country where a reported 72% of the population follows some form of Christianity, religious leaders can play an influential public role – though not all are ideally suited to do so on the issue of GBV. Take popular televangelist Pastor Mboro, for instance, who has previously been reported to the SA Human Rights Commission by Sonke Gender Justice for publicly digging into women’s vaginas to “heal them”, as well as once kissing a minor to “heal her” of sores in her mouth and then saying he’d like to kiss her all day because her lips were so soft.

It’s to be hoped that Pastor Mboro is an outlier. But there are other potential problems with attempting to address issues related to gender roles and sexuality through religious bodies.

If gay men want to take up Shabangu’s invitation to South African men to be the “protectors of society”, for instance, will they be invited into the Grace Bible Church at the end of the “Men’s March”? If a lesbian has been raped, would she be able to seek solace in the Grace Bible Church?

Grace Bible Church’s ‘statement of faith’ explicitly says that they do not accept gay members:

“With regards to sexual behaviour, we believe in heterosexual relationships between a natural man and a natural woman within the confines of lawful matrimony. Adherence to this stated principle of sexual behaviour is an inherent requirement of membership of Grace Bible Church.”

The website of the Zoe Bible Church, meanwhile, has a tab for “ladies”, explaining that the church “empower(s) women to take their rightful place” – although this place may be at home, because a main objective is to “prepare young women for marriage and motherhood”.

The same church, in a newsletter sent out earlier this year, also describes the idea that there should be a separation between Church and State as “man’s idea orchestrated by Satan himself as a means to clip the wings of the Ekklesia and its legitimate God-given authority to govern and legislate on the earth”.

It is the separation between Church and State, however, which has given South African women reproductive rights, on paper at least. The kinds of views espoused by these religious bodies make them unlikely allies in the fight for true gender equality ostensibly espoused by the ANC government, however much they might urge congregants not to rape or kill.

But true gender equality in some ways seems to be seen as an entirely separate issue to that of GBV. Shabangu’s “protector” narrative, together with her exhortation to men to be the financial providers for their families, implicitly entrenches a view of women as junior parties – as weaker and less able. With research showing that the major motivation for rape is to express dominance and power, this is a dangerous rhetorical avenue.

It was telling, too, that in a National Assembly debate on the topic of violence against women, ANC MP Mandla Mandela felt able to demean and objectify a DA MP as a “Miss South Africa finalist” – another expression of dominance and humiliation.

Some of the government’s proposed events for the 16 Days are more sensible: cleaning areas which feature “open fields, high grass, dilapidated buildings and deserted areas”, for instance, because they often become sites for rape and murder. But in fact, that’s the only practical initiative, and it’s repeated on three of the 14 events. The rest are all prayer, walks and talks.

As always, most of the useful work undertaken during the 16 Days initiative is likely to be by NGOs, who already pick up a lot of the state’s slack in dealing with GBV. Civil society groups will be marching to Parliament and provincial legislatures this week to demand government funding for practical measures: the struggling Sexual Offences Courts, police training and resources, and the civil society organisations which provide vital services to survivors in the absence of government facilities.

GenderLinks, meanwhile, is urging a focus on the economic empowerment of women, pointing to the fact that economically-disempowered women are less able to escape GBV. “We cannot talk about ending violence without talking about women’s political, economic and social empowerment,” GenderLinks CEO Colleen Lowe Morna said in a statement, calling for a “radical shift in approaches to ending violence”.

That radical shift shows little sign of coming from the government. While candles are lit and prayers mouthed, South African women will continue to pay the price. DM

Photo: Women collect sea water near Coffee Bay, in South Africa’s Eastern Cape, 06 May 2014, which is also one of the poorest and most crime affected areas in the country. EPA/Kevin Sutherland