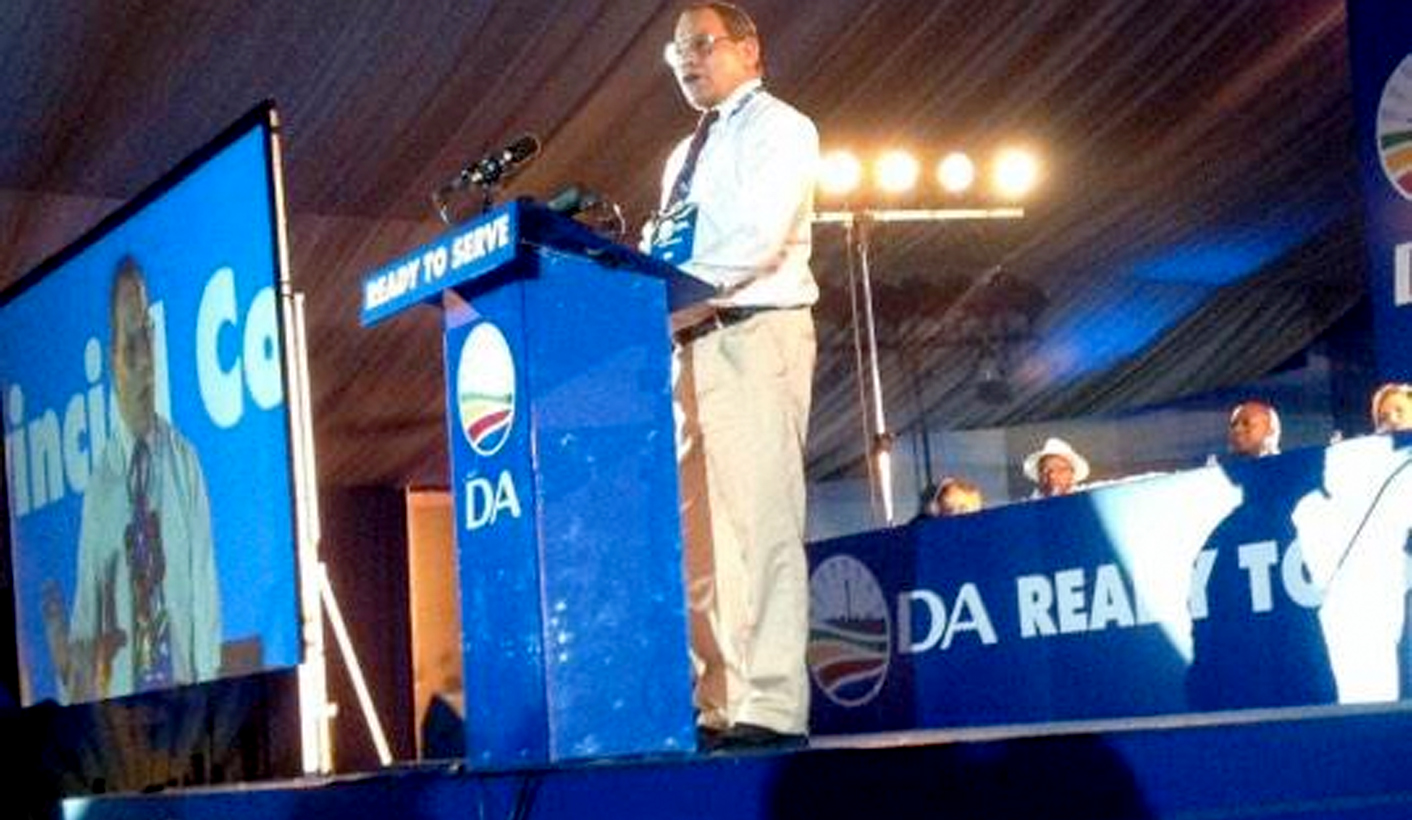 The Democratic Alliance (DA) held its Gauteng provincial congress on Saturday. Despite the glitz and glam, it was all about elections, 2014 and 2016. GREG NICOLSON was there and looks at the party's future.

Imagine a DA-themed wedding. The hall at Birchwood Conference Centre is draped in blue and white with the party logo shining on the ceiling. Each chair has a blue cover and the blue carpet – where Mmusi and Helen will walk – has “DA Ready to Serve” stickers. Nets of blue and white balloons hang above the hall ready to be released. Members take selfies at the podium in front of the party’s jumbo screen and the chants (this is an election) begin. “John! John! John-Michele! John! John-Mich! John-Mich! JohnMich! Johnmich!” yell members in blue cacophony.

PJ Powers’ “Jubulani” and Jeremy Loops’s “Down South” get the crowd started. The three jumbo screens take over. “Are you ready?” flashes a text message. “Ready to serve?” A video flashes through the party’s election campaign, the marches, a clip from Midvaal, Mandela’s passing, Zuma’s middle finger adjusting his glasses, Marikana. Eventually, Mafikizolo’s “Khona” erupts and Mmusi Maimane walks the blue carpet like a rock star – stopping to dance here, a hug there – a gaggle of ushers in tow.

The party’s slick provincial congress is about taking stock, looking back to the election campaign and forward to the 2016 municipal vote. Here in Gauteng lie the DA’s ambitions to govern more of South Africa.

While the party’s 2014 general election results didn’t see an astounding leap, the path of steady growth continued. Nationally, the DA took 22%, an almost 6% increase on 2009. In Gauteng those who voted for the DA in the national elections jumped from 21% to 28%, but in the provincial race the party took over 30%, up from almost 22% in 2008. More heartening for the blues is the ANC’s fall: dropping 10% in the provincial election, giving it a slim majority at 53%.

Before both Maimane and Zille speak, canons shoot blue confetti over the congress. With support for the ANC floating nearer to 50%, the DA know they have a shot at taking at least one of Gauteng’s big metros, Johannesburg, Ekurhuleni or Tshwane, in 2016.

Everyone speaks of returning the province to the people, even though, as the ANC will point out, only six months ago voters democratically elected a government. “[Voters] are going to remind you that what you are doing to the people of Gauteng is unforgivable, and if they don’t forgive you they will vote for change,” Maimane says to Premier David Makhura.

“In 2016 we intend to return [Johannesburg] to all the people along with all of Gauteng’s metros and municipalities,” says Zille.

How? The resolutions at the congress don’t offer any inspiration. They range from numerous notes of pride, tribute and appreciation to endorsements of existing policy – reducing red tape, investigating job creation, and pushing for finances to maintain provincial infrastructure.

The party has an inherent self-belief in its ability to govern better than the ANC. In its 2016 campaign it is sure to continue highlighting successes in Cape Town and Midvaal, while linking ANC-run areas to service delivery failures, corruption and patronage.

It’s also relying on the belief that as the country plumbs the depths of democracy, the ANC’s struggle history will have a reduced impact on elections and the impression that the DA is a white party will fade. After the general elections, the party estimated its share of black voters jumped from 0.8% to around 6%, roughly 760,000 of its over four million votes, with the highest support amongst black voters in Gauteng.

What’s likely to have more of an impact is the work the party does in communities between now and the elections. While the ANC profits from its deep network of branches across the country, providing a huge base off which to campaign, the DA hasn’t been as vibrant and deep-rooted at the local level. Leaders, however, are encouraging members to increase campaigning on the streets, even if they fear intimidation. The province needs to increase its number of activists from 20,000, already a party record, to 50,000 for the next elections, says provincial leader John Moodey. That could make the difference in getting voters to the polls.

But winning another Gauteng municipality remains far from certain, with ongoing challenges and a changing political environment. Since 7 May, the party has been on the back foot, reacting rather than leading debate.

Two of the DA’s most prominent young leaders are now on the sidelines. Despite being one of the most known politicians in the country and featuring on DA election posters, former parliamentary leader Lindiwe Mazibuko resigned from her post and holds no leadership position. Then, DA Youth leader Mbali Ntuli quit. Both resignations raised the spectre of whether the party can accommodate a rising, young black leadership. Once again, the spotlight was on Zille’s leadership. Since Ntuli’s resignation the party’s youth wing has had almost no presence.

The DA won headlines in its fight for the Spy Tapes and will capitalise on the saga as it pursues a review of the dropping of corruption charges against President Zuma. In Gauteng, with limited success, the party also jumped on the water crisis. However, the issue it rallied most around in the elections – e-tolls – has been diluted since the Gauteng ANC resolved to challenge the system and Premier Makhura initiated the review panel.

But politics since the elections have been defined by the leftist movements. In Parliament, the Economic Freedom Fighters (EFF) have been dominating attention, forcing the DA’s new parliamentary leader to ditch the style that earned him the “mini-Obama” tag and become more combative. Now the shine is gone, Maimane appears more genuine and more relatable, but his team in Parliament, its general adherence to the rules and court action, will never be able to match the EFF’s stunts for standing up to the ANC.

The DA thinks the EFF will self-destruct. Each leader at the congress speaks of the DA’s ability to hold peaceful internal elections while others fight for decisions with pangas, clearly referencing the violence at the EFF’s recent provincial meetings. Zille says specifically: it’s easy to start a party, hard to keep it going, and populist socialists continue to rise and fall.

She’s also talking about the National Union of Metalworkers SA (Numsa). Looking to 2016, it seems the DA is lumping Numsa into the same category as the EFF, which is yet to prove it can sustain and build on its success. In reality, no one knows what effect a Numsa-led workers party might have. But all parties should be concerned if a well-organised, well-funded newcomer with working-class roots and respected leadership contests the elections.

For the DA, achieving outright victory in any of Gauteng’s municipalities is unlikely, and Zille acknowledges a real possibility: coalitions. They’re ready to follow the path of Cape Town, where a patchwork coalition led to the DA taking the city before clawing an outright majority in subsequent elections.

The team to get the party there was elected on Saturday. Moodey kept his position as provincial leader, with Michele Clarke his deputy. After an uncontested election, Solly Msimanga will take over from Mike Moriarty, who stepped down as provincial chairperson.

Working with the DA’s national leaders, they have the potential to change politics in the province. But with an ANC determined to retain its majorities, EFF banging on the door, the potential of a workers party, and the DA still pushing to transform its image, the line between continuing to achieve slow but steady increases and actually challenging for leadership is thin.

Behind the glitz and wedding songs, the DA is gearing for a fight. “They will threaten us,” says the charismatic Msimanga. “You know a horse, when it’s dying, its kick is very hard. But we will tie those legs. And it will die.” DM