Smile the beloved country: How an ice cream and a random act of kindness made us feel good again 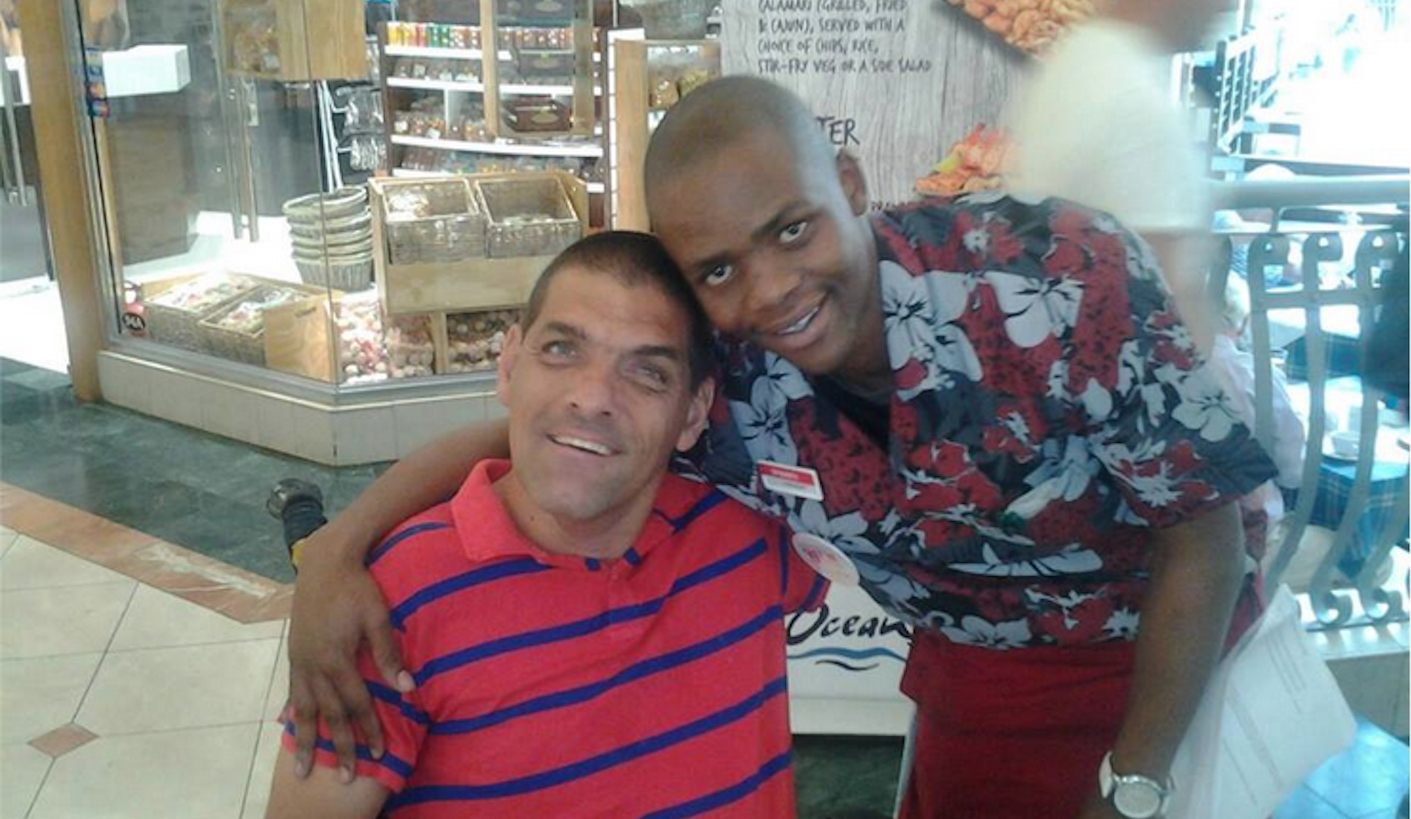 Last week a waiter at a fast food restaurant in Cape Town made headlines when he was spotted lovingly helping a disabled man eat his takeaway ice cream cone. This simple act of random kindness seemed to resonate deeply with weary South Africans seeking some respite from negative headlines and helping to restore a much-needed sense of community and hope. But should we really be surprised? By MARIANNE THAMM.

By Sunday night Tertius Gouws’ post on the Wimpy SA Facebook page had been shared by over 2,000 people and had prompted about 10,000 comments. Waiter Vincent Mota’s act of kindness at a branch of the food chain in the Canal Walk shopping centre – helping Richard Kitching to eat his ice cream, lovingly wiping his chin and embracing him – soon elevated the 26-year-old Motala to a mini citizen hero, inspiring the #vincentissharp and #needmoreVincents hashtags on Twitter and resulting him being interviewed on radio stations.

This is what Gouws wrote after witnessing the event: “I was at the Canal Walk Wimpy today and what I saw blew my mind away!!! There was a seriously disabled man in an electric wheel chair in the Wimpy. He had just ordered an ice cream of some sort which was an effort on his part and on the staffs’ part, since this man also had trouble communicating. As I sat there watching this, I thought, ‘How is this man ever going to manage to eat his ice cream?’ As I was trying to figure it out, one of the waiters went and sat down with the man and started feeding him the ice cream. You could see that the waiter was not doing it because he was told to do it, you could see the compassion and love in his face. I sat there, totally amazed!! After the man had finished his ice cream he gave the waiter a big long hug! I have never seen anything like this at any restaurant! The waiters name was Vincent. He needs to get some kind of bonus or at least some recognition from the higher ups of the company!! You are so lucky to have an employee like Vincent! I am very impressed!! PS. The food was great, the service was great and I like the new menu.”

In a country weary and depressed by a daily avalanche of headlines about corrupt, venal politicians, angry MPs who come to blows in the country’s parliament, violent criminals, angry racists, and where millions live in obscene poverty, the response to Vincent and Richard’s tender encounter speaks to a nation hungry and desperate for an alternative narrative.

On the one hand, the headlines render our lives cheap, nasty, brutal and short, but away from this disconnect and noise we suspect or hold onto the hope that an entirely different version of life plays itself out, hidden from the greater public view.

But should we really be THAT surprised by what happened between Vincent and Richard?

Last week Cover2Cover, a local publisher that has produced a range of books that, in their own words, “tell the rich and diverse stories of South Africa”, had a package delivered to my home. I had contacted the publishers, keen to read some of these stories and think about how these are helping to create a new generation of readers as well as complete a grander narrative tapestry of South Africa beyond history, politics and mainstream literary fiction.

The first book I pulled from the brown cardboard box was Ubuntu Girl, published by Face2Face, an imprint of Cover2Cover Books. The cover of the book is unadorned. The title, a subtle beige cursive typeface, floats on a simple black background with a few words that pop out in colour; “150 families”, “9 provinces”, “114 towns” “taking only R100”. At the bottom of the cover is the name of the author, Sonja Kruse.

“Sonja Kruse set off on a countrywide journey with little more than a backpack, camera, phone and R100 to prove that the spirit of uBuntu in South Africa is alive. In October 2009 she quit her job, gave her car away and left the familiar behind to embark on a yearlong journey around her country. She became known as the uBuntu girl.”

Here we go,” I thought to myself, “another white person trying to find themselves and some kind of redemption journeying through black life and who has to write about it.”

We’re cynical like that, well some (maybe most) of us, like me. Agnostic-atheist-social democrats who, while we suspect human beings posses the capacity for community, kindness and care, have witnessed too much that points to a more stark and harsh reality.

Perhaps that is why Sonja Kruse flew under my radar. I had not heard or read about her until I picked up her book (published this year), chronicling this remarkable journey and filled with photographs and other interesting blocks of information about the people she had met along the way. I began reading at 1am on Friday night and could not put the book down. Sonja journeyed for 351 days, crossed 13,685 kilometers, walking 2,220 of these, wearing out three pairs of shoes – alone. But not completely, we soon find out.

While at first I searched for some kind of zealous religious undertone to this seemingly insane journey, I soon surrendered, succumbed and was humbled by this remarkable young woman’s respectful voyage through the people and the landscape of this country. This book is more about us than it is about her, and as the sun rose as I kept reading, I fell in love with South Africa and who we are, all over again.

It is difficult to capture the texture and the breadth of Sonja’s journey that she undertook at the age of 34; inspired, she says, because from a very young age she could sense a thread connecting people. It is a thread that is often rendered precarious and in danger of unravelling through hardship, through forced and brutal competition with other human beings for food, money, and employment, through just the plain burden of shitty stuff that happens in life.

But from that moment in 2009 when Sonja gave up her job managing the Rhino River Lodge in KwaZulu Natal with her colleagues supporting her on this quest, she found immediate generosity. A taxi driver learned of her journey to find the meaning of ubuntu and paid the fare for the first part of the trek.

While we are led to believe that this country is unsafe and violent – particularly for women, never mind a white woman walking alone with only a backpack – Sonja’s journey into our soul proves the contrary.

From the first act of ubuntu in the taxi, Sonja continues to find countless more – strangers, poor, rich, white, black, rural, urban – strengthening that unseen, common thread. When a dog at one home where she sojourns for a night chews her shoes, someone offers her a pair of flip-flops off their feet. When she meets two homeless children, takes the time to engage and informs them she has no car and no home, they sketch for her a car and home in an exercise book. This is their wish for her. Their gift. A schoolboy gives her a toffee with a photograph of himself attached to the back so that she does not get lonely on her travels and so that she will know she is not alone.

Photo: With Queen and Thembela Mhlana and family.

Gifts she is given in one home are offered in another, people with nothing offer up their beds for her, cook her a meal with their meagre and precious supplies.

What follows is a truly uplifting and profound account of the power of the kindness of strangers, the gift of having and open heart and respect and a deep love of fellow human beings.

In this light, then, I am less surprised by the young Vincent Mota’s humanity. It is who we are and who we know ourselves to be. And one of our most precious gifts to ourselves as a country, as a people, is that of ubuntu. It is uniquely ours, as Sonja’s story so beautifully illustrates. DM