Tencent, WeChat and Chinese censorship: Does Naspers have a free speech problem? 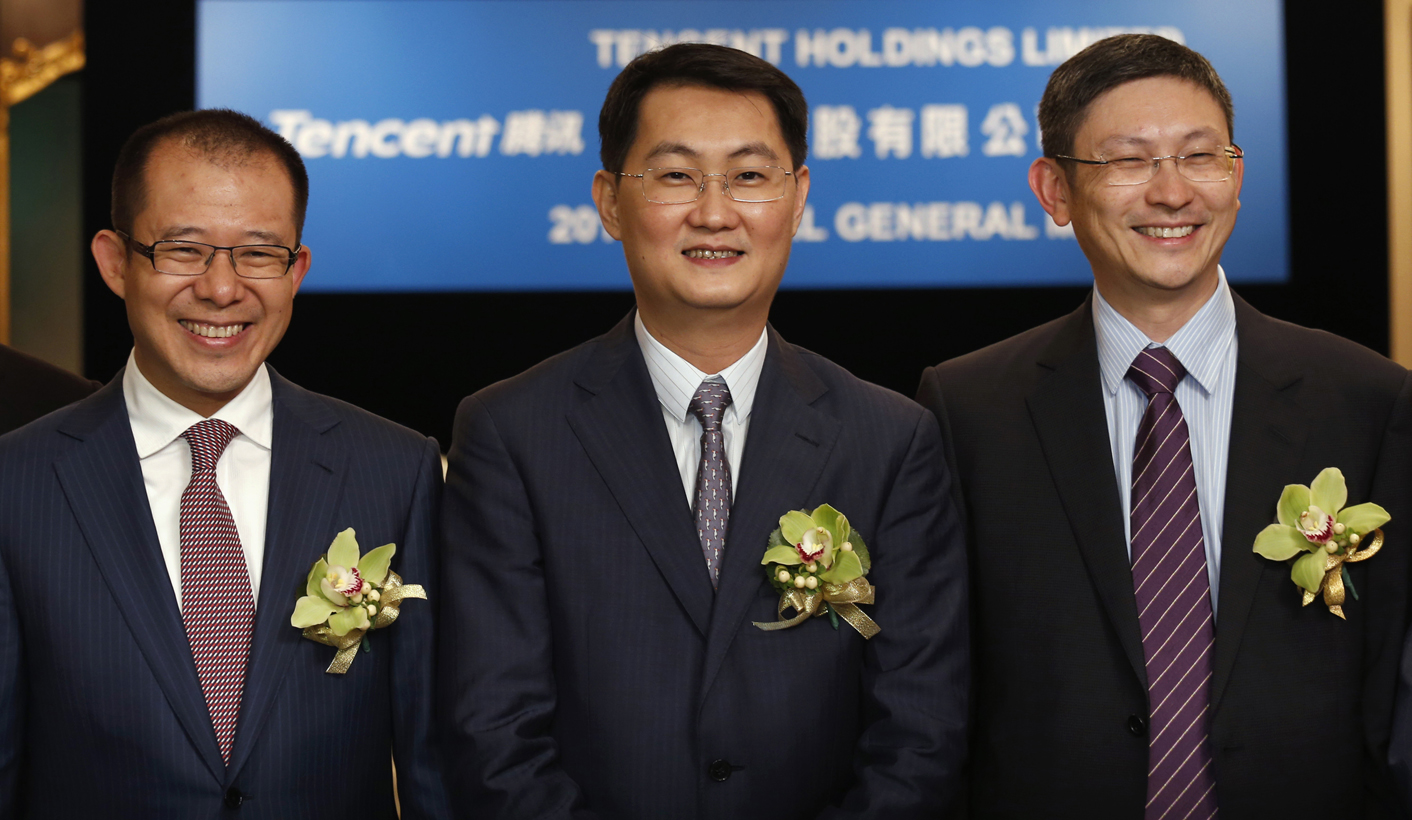 Naspers appears to be a company comfortable with contradiction. On the one hand, it owns Media24, the largest independent media group in South Africa and a vocal critic of any attempts to restrict media freedoms in South Africa. On the other hand, most of Naspers’ revenue, and its entire market cap, comes from its large stake in Tencent, the Chinese social media giant that is deeply complicit in official Chinese censorship efforts. Can the two positions be reconciled? Or is this an unsustainable hypocrisy that will not end well for South Africa? By SIMON ALLISON.

Normally, when we discuss threats to freedom of speech and expression in South Africa, we’re talking about the government and its efforts to impose the Secrecy Bill. But there is an even more insidious threat coming from a most unlikely source: Naspers, owners of the biggest media operation in the country, and the continent too.

In South Africa, through DStv, Naspers has a near-monopoly on satellite TV in the country; in the Daily Sun, it has the largest-circulation daily newspaper in the country; in News24, it has by far the busiest news site; and in City Press and Beeld, it has prestigious, serious publications that shape debate and public opinion. It also owns dozens of other print and digital titles, book publishers, distribution and e-commerce companies; Naspers literally dwarfs everyone else in the SA media business, with the possible exception of the SABC. (Disclosure: Naspers-owned Tafelberg published two Daily Maverick books)

When contemplating the future of independent media and good journalism in South Africa – in other words, the future of transparency and accountability in this country – there are few companies more important than Naspers. But can the today’s Naspers be trusted with this future?

The alarm bell comes from China, where Naspers owns a 34% stake in, until recently, Asia’s biggest tech company, Tencent. (In the meantime, Alibaba.com was listed on Nasdaq and is currently valued at almost $280 billion.) Tencent is valued at $150 billion, making Naspers’ stake worth a tidy $51 billion (R570 billion) – an incredible return for a $31 million investment in 2001.

This is big money, and the importance of Tencent to Naspers cannot be overstated. You do the maths: currently, the market values its Tencent stake even more highly than it does Naspers itself, which makes it a potentially great share to own, with the space to grow and then some. Tencent is the cash cow that makes Naspers so profitable – and underpins Naspers’ expansion.

Tencent is a social media giant in China. Between QQ, a chat service, and WeChat, the enormously popular Whatsapp-Facebook hybrid, the company dominates online conversation in China with some 800 million users.

But there are dangerous strings attached to being a successful social platform in China. China’s censorship and propaganda strategy is highly effective, particularly in the online space: users are monitored, specific websites are blocked, and search terms are carefully controlled. Tech companies are expected to co-operate with government requests for information and assistance. Some, who have refused, such as Facebook and Twitter, have been banned in China.

Tencent, on the other hand, is extremely co-operative. Just in recent months, it has been implicated in suspending user accounts at the behest of Chinese authorities; shutting down potentially inflammatory chat forums; and blocking messages containing specific, banned words or phrases.

One concrete example: during the recent protests in Hong Kong, WeChat users in mainland China were blocked from seeing any shared images originating from Hong Kong-based users. According to the Wall Street Journal, the app also blocked holders of public accounts from posting any news items that combined “Hong Kong” with words like “protest” and “democracy”. Chinese authorities, with Tencent’s help, were clearly attempting to block information about the protests. Evidently, Tencent is firmly plugged into the Chinese censorship machine.

And Naspers is profiting from it.

“Naspers is a company that has always been particularly skilful at negotiating its relationship with governments, especially repressive ones. It did it under Apartheid – and flourished – and it is ironic that it finds itself bringing the same skills to bear in China today,” commented Anton Harber, Caxton Professor of Journalism and Media Studies at Wits University.

“My understanding is that Media24 editors are given a good deal of freedom on most issues but are made well aware that they need to stay away from criticism of China.”

He added: “To be fair, one has to acknowledge that it is not directly involved in what Tencent is obliged to do under Chinese censorship law. It is an investor and that is all and it makes little claim to being moral or ethical. When I have asked them about it, their attitude has been: ‘We leave these issues to local management’.”

Naspers is also facilitating Tencent’s entry into the South African market, coordinating a media blitz to promote WeChat in this country. But what guarantees do South African users have that their information will not be handed over to Chinese authorities? Or, for that matter, that the South African government will not have similar access to, and influence, over WeChat accounts?

It’s not just Tencent, either. Naspers’ other holdings in China include two state-run media organisations, the Beijing Media Corporation and the Xin’an Media Corporation, neither of which are exactly role models for independent media – more The New Age than City Press.

Outside of South Africa, it’s clear that Naspers has a free speech problem. And it doesn’t seem to care. It is not using its influence to protect social media users from government surveillance; it is allowing the Chinese government to dictate what Chinese citizens can and can’t see; and by retaining its stake in Tencent, it is condoning the systematic censorship in China.

“We have investments and operations in more than 130 countries around the world. Each country has its own laws and requirements, with which each local company needs to comply. Tencent obviously needs to comply with the laws of China,” said Meloy Horn, Naspers Head of Investor Relations. Neither Horn nor anyone else from Naspers would answer specific questions posed by the Daily Maverick.

This is an immensely profitable position, of course. But for South Africa, it raises too many questions for comfort. Right now, a significant chunk of South Africa’s free media is owned by a company that puts profit ahead of principles; one that is prepared to sacrifice the principles of freedom of speech and expression in return for cash.

Media24’s editors, the guardians of their titles’ editorial integrity, appear reluctant to discuss the the issue. Both Adriaan Basson, the multiple award-winning investigative journalist who is now editor of Beeld, and Jannie Momberg, editor-in-chief of 24.com, said they simply didn’t know enough about Tencent to have an informed view. Ferial Haffajee, editor of City Press and the recipient last month of the international press freedom award, referred the Daily Maverick to a Naspers corporate spokesman.

This reticence undermines Media24’s vigorous participation in campaigns against the South African government’s attempts to curb media freedoms. Most damagingly, it gives the government plenty of ammunition to dismiss their criticism as hypocritical – fundamentally weakening the role of Media24 as a media watchdog.

Naspers’ investment in China’s willing suppressors of free speech might be incredibly good for its shareholders, but it could be a really bad news for the rest of us. How long before Naspers decides that independent journalism and free speech in South Africa is a luxury that it can’t afford either? DM

Photo: (L-R) Tencent President Martin Lau, Chief Executive Officer Pony Ma and Chief Financial Officer John Lo pose before attending the company’s annual general meeting in Hong Kong May 14, 2014. Tencent?Holdings Ltd ended a choppy session up 0.8 percent after swinging between a 1.4 percent gain and a 1.7 percent loss within the first hour and a half of trade. Analysts attributed the movements to investor caution ahead of its first quarter earnings due later this afternoon. REUTERS/Bobby Yip.