BANDAID30: The Narcissist’s anthem gets a sequel 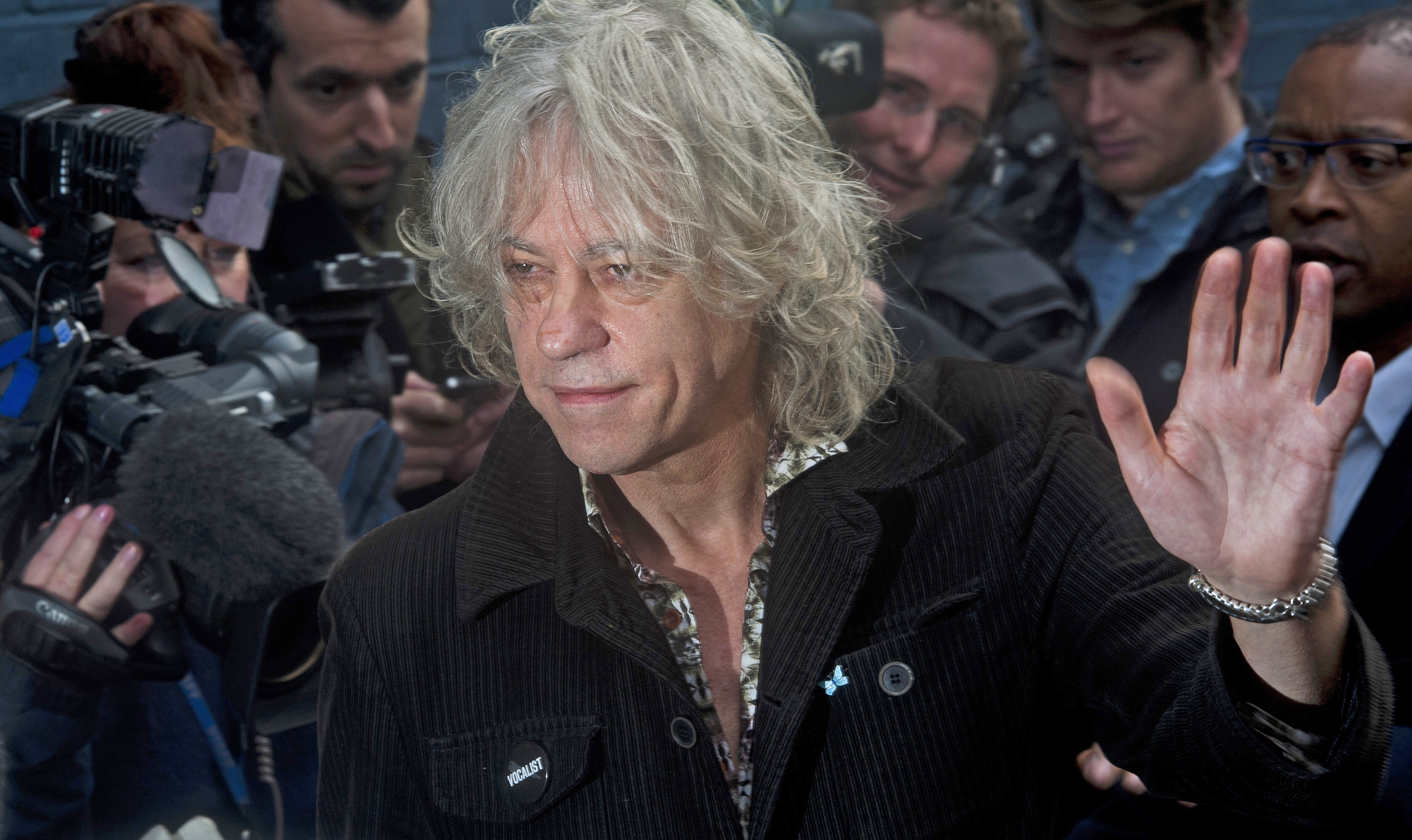 Band Aid is back. This time, with fewer Christmas bells, and more self-righteous celebrity primping. Can a song do real damage? Oh, yes it can! By RICHARD POPLAK.

The video clip opens with an astonishing montage: a helmet-mounted camera follows two Hazmat-suited health workers into a filthy shack, toward a black woman lying on a putrid mattress. Cut to a full shot of the woman on the bed, wearing only a bra and a skirt, her pose almost sensuous. Cut to the Hazmats carrying another nearly naked corpse gingerly, as one would an explosive device, toward a doorway and out into the light. A sudden, vertiginous jump cut: a wall of paparazzi, cameras flashing. A famous man alights from a limousine, a mop of gray hair momentarily obscuring his features. More famous people, some briefly posing for the cameras, one of them wearing a name-brand emblazoned across his chest—Adidas! They enter a mansion or a hall or a place of worship, and chat amicably.

Then they start singing.

The video is, in fact, a sequel. The original is 30 years old almost to the day, and barring the opening shots of the dead women and the Hazmat disposal team, both clips are almost identical, with one vital difference. In the original, the opening shot reveals a full-page newspaper article, with a picture of famous musicians above the headline “Band Aid”. The newspaper is a key detail, for it tells us everything we have ever needed to know about the celebrity benevolence industrial complex—it has always been an exercise of fame’s most important prerogative: power. Because celebrity is only capable of celebrating inwards, whenever the famous deploy the full force their fame—no matter the cause and regardless of the intention—they will always end up the beneficiaries. Fame is a closed loop; it shines its light only upon itself.

The original Band Aid project was devised by Irish Boomtown Rats frontman Bob Geldof, after he watched a BBC report covering the Ethiopian famine of 1984. Geldof was apparently so moved by the terrible images he saw on television that he contacted Midge Ure of Ultravox, who began diddling with a synthesizer at his kitchen table. “I started messing around with a little bell sound and it was instantly Christmassy,” Ure would later say. Geldof popped round, they had tea, strung some lyrics together, called it “Do They Know It’s Christmas?” They formed a collective including the biggest names of the day, and the following day recorded the bestselling single of all time, which between the years of 1984 and 2004 raised $230m “for aid to Africa”, according to The Economist.

Band Aid did more than that, though. It earned Geldof a knighthood, and taught another of its members, Bono, that a mixture of fame and charity can lead to the most sanctified halls of power—lunches with presidents, dinners with the Dalai Lama, tea with God. It proved, once and for all, that celebrity could remap the world, and that power led to more celebrity, and celebrity to more power. The planet was suddenly a narcissist’s playground. There was nothing fake, nothing imagined about Band Aid’s impact. “The power of the song is still felt today,” Ure recently said. “There was something real and honest and genuine about it. It’s not the greatest song in the world by any stretch of the imagination, but as a record, it moved mountains.”

Sadly, Ure is wrong on two points: “Do They Know It’s Christmas?” is a vile piece of music—a song so bad that it should have been junked with maximum derision by the press, a novelty song in which the surfeit of fame was the novelty. Thankfully, there was the (very) occasional musician with balls enough to rip the song a new one.

“I’m not afraid to say that I think Band Aid was diabolical,” said Morrissey. “Or to say that I think Bob Geldof is a nauseating character. Many people find that very unsettling, but I’ll say it as loud as anyone wants me to. In the first instance the record itself was absolutely tuneless. One can have great concern for the people of Ethiopia, but it’s another thing to inflict daily torture on the people of Great Britain. It was an awful record considering the mass of talent involved. And it wasn’t done shyly; it was the most self-righteous platform ever in the history of popular music.”

But for the most part, Geldof et al were protected from criticism by about 14 million starving “Africans”, and if bad taste is almost always a sign of bad morals, in 1984—just as in 1984—it was easy to use nightmares in order to prop up power. Many African countries were in bad shape, years of tanking commodity markets, cold war politicking and shitty governance had left them deeply in the red. From where Geldof was sitting, the continent was a blank slate to be re-colonised by celebrity-endorsed Love, a big wasteland that could question neither his motives nor his musical sensibilities.

And if Band Aid “moved mountains”, where did the mountains move to? Which is another way of asking: where did those quarter billion dollars go? In the case of the Ethiopian famine of 1984, most of the international aid was left to the Derg to administer. (We didn’t learn about the Derg in “Do They Know?”, but they were the largely unlovable commie tinged junta running Ethiopia at the time). In other words, the very regime starving its people into submission for political reasons was handed the keys to the food aid trucks. In this, the famine was not properly a famine, but rather a case of weaponising food. Anyone who waded into the situation from afar and tried to help became immediately complicit in the massacre of over a million Ethiopians, simply by handing the Derg more ammunition in a war in which food was the ammunition. “Every time it’s worked,” Geldof recently told the BBC (this is not the first time that Band Aid has been revived.) “Without question, without any shadow of a doubt, there are hundreds of thousands, if not millions alive today who would have died of hunger.”

Africa, where “millions” can be saved without the data proving their salvation.

Nothing is simple, yet if Band Aid taught the celebrity benevolence industry anything, it was that simplicity is essential in “raising awareness”. But what “awareness” did Geldof and Co. “raise”? They painted a remarkably durable portrait of an abject continent, conflating 14 million at-risk Ethiopians with “Africa” in a way that has been nearly impossible to erase. I want to be very clear here: because of the song’s massive and lasting popularity, it created an Africa for a generation of Westerners. It wasn’t the only mediated version of the continent, but it was by far the biggest. It wiped away any number of possible Africas, and raised an inviolable sculpture of a place of no hope.

The impact, again, plays out in real time—when I’m asked to speak to investors around the world about African countries’ economic possibilities, I stun them with my tales of a vibrant, growing, changing continent. “Do They Know?” has come up more than a dozen times in post-conference drinks—it certainly raised awareness, and that awareness has been near impossible to unraise. “How could a people ignorant of Christmas sort themselves out to such an extent that their economies are growing by over five percent a year?” wonder my baffled interlocutors. While I would like to know how much real money—not unreal aid money—has Band Aid robbed from the continent in lost tourism and investment?

I’d wager it’s more than half a billion.

Anyway, here we are again—Sir Bob has assembled a bunch of luminaries for BandAid30, this time in service of raising money to fight Ebola. The song, which debuted last Sunday on BBC’s X-Factor, has been slightly tweaked: instead of “Well, tonight thank God it’s them instead of you,” we get the borderline pedophilic (and certainly unsanitary),”Well tonight we’re reaching out and touching you.” The sheer musical and intellectual indolence of the whole project is summed up by that one revision—a ghastly lyric exchanged for an indefensible one.

The signature line itself has been panel-beaten into, “How can they know it’s Christmas time at all?” And who are “they”? This time, Geldof has insisted on specificity: West Africa, where “a kiss of love can kill you, and there’s death in every tear.” The problem, once again, is that Ebola (which goes unmentioned, as did famine in the original) does not bedevil West Africa, but three West African countries. You are less likely to contract Ebola in Togo than you are in Dallas, while the beleaguered people of America (or Spain, or India) go unsung. It doesn’t seem fair.

This time, there are simply no excuses. Geldof, Bono and their friends have had three decades to become functional adults. And while this Band Aid is a more muted, carefully politically correct affair—I doubt mountains of coke were consumed as they were after the initial recording in ’84—that does nothing to dim its essential evil: the gargantuan world-swallowing holier-than-thou desire of the famous to help while simultaneously increasing their fame.

And so we must ask: who are the dead women in the re-upped video’s opening sequence? What are their names? Where are they? Did they want to be seen in only their undergarments? Did they sign off on appearing in the video before dying an agonising death? Did their families sign off on their behalf? Why is there no dateline? And why do their corpses lead in to an image of Sir Bob emerging from a limo on a London high street, his stringy gray coif nonetheless suggestive of expensive hair product, while paparazzi cameras blaze away?

Those images were chosen and used in succession for a reason: nameless dead Africans must be sacrificed on a video-pyre to celebrate the greatness of the New Gods. “Africa”, wherever it may be, is a construct upon which reputations are forged. Saintliness requires simplicity. And if Ethiopians went hungry in ’84, at least fame’s insatiable hunger was fed. Ebola allows the feeding to continue: “From what we’ve seen from iTunes, it’s gone bonkers,” Bob recently told the BBC of the song. “Within four or five minutes we had a million quid.”

Man, that must feel good, having written the narcissist’s anthem, and killing it on iTunes. DM

Bernard Chiguvare for GroundUp • 3 hours ago