House of wild cards: How effective is South Africa’s Opposition? 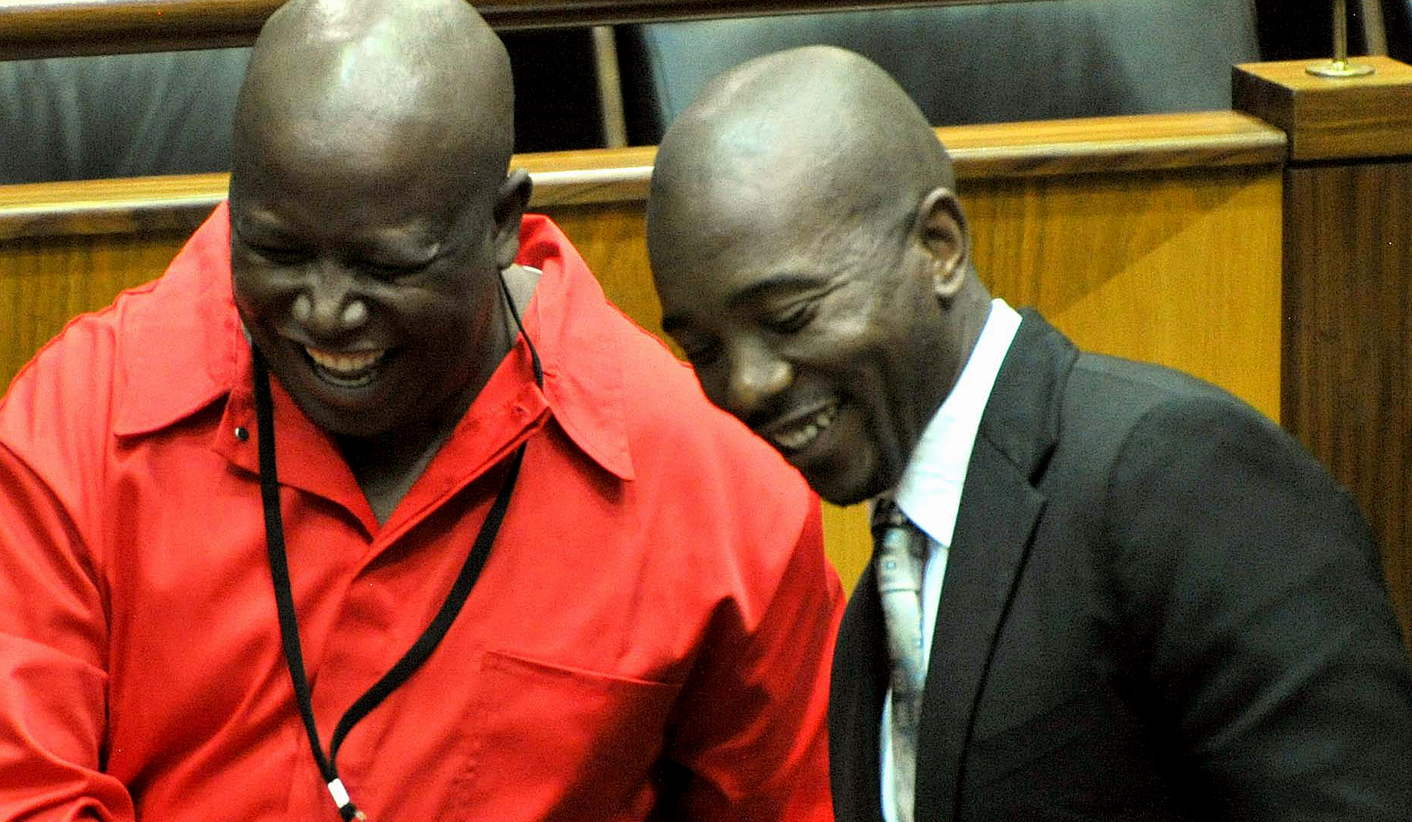 On the face of it, it looks like high-octane political opposition in South Africa. The fifth Parliament is a bustle of activity, with opposition parties challenging the ANC and tackling President Jacob Zuma and his Cabinet at every opportunity. In a day of high drama last week, the opposition parties staged their first filibuster in the South African Parliament. Regardless, the Nkandla report was adopted by the ANC majority. So apart from the EFF’s red overalls, the DA’s mourning garments, the clashes with police, the constant motions mocking Nkandla and the legendary clashes with Speaker Baleka Mbete, are opposition parties succeeding in running interference against the ANC? By RANJENI MUNUSAMY.

It will be difficult to replicate #PayBackTheMoney in terms of what it achieved. The Economic Freedom Fighters (EFF) leader Julius Malema confronting President Jacob Zuma in the National Assembly, and demanding that he answer when he will reimburse the state for undue benefits at Nkandla, was the maximum point any opposition leader in South Africa has gone in demanding accountability at the highest level.

When Zuma did not answer the question, the EFF brought the House to standstill, resulting in the sitting being suspended and later police entering the chamber to stop the protest. It is not a particularly proud moment in parliamentary politics. Neither did it achieve the desired objective of forcing an answer out of the president or, best-case scenario, getting him to actually pay back the money.

What it did, however, was show that the new parliamentary opposition would not tolerate the president and the executive refusing to be held accountable.

But now Zuma has not returned to Parliament, and as the opposition is discovering, there is not much the opposition parties can do to get him there. Plenary sittings of the House end this week, which means it is impossible for the president to return to Parliament this term to continue answering questions for oral reply. When Parliament resumes next year, the first sitting of the House is the State of the Nation Address in February.

The opposition parties now need to decide whether to disrupt the Opening of Parliament, or wait for the next available opportunity to demand answers from the president. Malema has already vowed that his party will cause disorder at the State of the Nation Address if Zuma has not yet given an answer about when he will pay back the money.

A lot of what happens next rests of the shoulders of Mmusi Maimane, as Leader of the Opposition. When Maimane took up the position as the Democratic Alliance (DA) parliamentary leader after the May elections, many people thought he was out of his depth, being inexperienced and timid, as compared to his predecessor Lindiwe Mazibuko. Maimane did flounder at the beginning, but has become much more emboldened as the atmosphere in Parliament has heated up.

While DA leader Helen Zille declared after the elections that she was not prepared to co-operate with the EFF, the DA contingent in Parliament discovered the extra leverage they have when working with Malema’s party. All the major opposition parties have united in challenging the ANC in the ad hoc committee on Nkandla. On Tuesday morning, a group of opposition parties led by the DA also objected to the report of the Powers and Privileges Committee on the EFF disciplinary matter.

But it is the events in the House last Thursday that really bound the opposition parties together. They knew that there was no way that they would a vote to block the Nkandla report and therefore decided to delay its adoption through a filibuster. The co-ordinated move of tabling motions for three straight hours made the point that they would not make it easy for the ANC to push through the report, even though the numbers favour the ANC.

Opposition parties have also taken a united stand against the Speaker of the House Baleka Mbete, demanding that she step down because she is biased and favours the ANC. They have also challenged other presiding officers, including Mbete’s deputy Lechesa Tsenoli and House chair Cedrick Frolick.

It is significant to note that while the opposition parties did not set out to collaborate against the ANC, it is the ruling party’s actions that keep driving them together.

When riot police was called in to remove EFF MP Reneilwe Mashabela refused to withdraw a statement that Zuma was a “thief”, Frolick ordered that she be forcibly removed from the House. It is not yet known who called in armed police officers to remove Mashabela but this caused the DA caucus to rush at the police to stop them.

According to a motion tabled by DA MP Dianne Kohler Barnard on Tuesday, DA MPs Terri Stander, Juanita Terreblanche Gordon Mackay, Dion George, Dean Macpherson, Yusuf Cassim and Michael Waters were beaten up during the altercation. The DA has laid three assault charges against the police and one against the Deputy Minister of Higher Education Mduduzi Manana for injuries they suffered. Kohler Barnard said there was “wild and gleeful cheering by the ANC as the police marched in”.

Last Thursday night’s pandemonium has added new combativeness to the DA caucus, with MPs tweeting about going to the gym to prepare for sittings and displaying their war wounds on social media.

But where do they go from here? Can the opposition parties in a united manoeuvre really frustrate the ANC’s grip on power?

During the adoption of departmental budget reports on Tuesday, the EFF objected to every single report that came before the House and read declarations explaining why they opposed the work of the departments. The DA objected to some of the reports and noted concerns on others. However the reports were adopted through the ANC’s overwhelming majority. It is simply not possible for the opposition parties, individually or collectively, to impede the ANC. All they can do is slow down the process and drag matters out, as they did on Tuesday.

An intervention by Deputy President Cyril Ramaphosa is trying to ensure a smoother working relationship in Parliament, and “restore the dignity, integrity and standing of Parliament”. Ramaphosa, in his capacity as Leader of Government Business, met leaders of opposition parties on Tuesday morning and announced a cessation of hostilities pending the negotiations of a multiparty committee chaired by him. It is what Ramaphosa is famed for – multiparty peace talks are his thing.

They way he ensured that the parties were hooked into the process is to suspend the disciplinary action against the EFF, pending the outcome of the committee talks. This was an act of good faith on his part to show that he was committed to the process.

But there are two big issues that could lead to the opposition parties rejecting Ramaphosa’s intervention. The first is the role of the Speaker and other presiding officers, and the second is when Zuma would come to the House to account. Ramaphosa was dexterous enough not to make commitments on either. He said the responsibility of the presiding officers was to “apply the rules consistently, fairly and without fear, favour or prejudice” and that a conducive climate needed to be created to allow members of the executive to be accountable.

As a result of the agreement reached, there was some attempt to restrain the aggression and verbal exchanges in the House. However, the tension was still palpable and there were numerous incidents when MPs had to be reminded of the spirit in which the discussions had taken place. The DA also rescinded its undertaking last week that it would refuse to recognise the authority of the Speaker. There was no mention of this on Tuesday and the DA caucus participated normally in the business of the House while Mbete was chairing sessions.

The one issue on the agenda on Tuesday that could have left the agreement in tatters was a DA motion to censure Zuma for his refusal to be held accountable. However DA chief whip John Steenhuisen announced that they had agreed with the ANC’s chief whip Stone Sizani to hold the matter over till Wednesday.

Ramaphosa’s intervention has taken the sting out of the opposition, to an extent, but this truce can only hold if he brings more to the table. The opposition parties also need to decide whether they pursue an aggressive stance – the EFF will irrespective of what the others do – or be more conciliatory in order to keep the wheels turning in Parliament.

Maimane said the multiparty committee must serve “as a forum to ensure that Parliament is restored to being a functioning institution”. But in a statement in the House, he said democracy lies in “uninhibited debate and robust politics in Parliament”.

The nature and structure of South African politics is undergoing a seismic change. Competition is increasing and the country is in need of leadership. It cannot be business as usual and political parties are having to prove their worth. Ultimately though, it is only through higher votes during elections that the opposition parties can be effective. Until then, they have to play with the cards they are dealt.

But for as long as President Zuma and the ANC continue to falter and show bad leadership, even a weak opposition will come off looking better. The opposition leaders have the members across the House to thank for the new infusion of energy and strength in their own benches. How will they use that new-found energy and to what ultimate purpose, remains to be seen.

While the deck of political cards in 2014 is still firmly stack against the opposition, nothing is eternal in politics, even as the ruling party would beg to differ. Soon there could be new players on the left, competing for votes in the 2016 local elections. Politicians were always best known for being able to read the early signs of change in political winds and adapt to suit their own interests.

It is entirely possible that one day, when the new political history of South Africa is written, the events of November 2014 will be recognised as the days when the party in absolute power lost the “absolute” part. But to get there, the opposition leaders of today will have to find and define their own enduring relevance. Not the easiest task when the ruling party still has the power to do whatever they please. DM