The closing of the Marikana Commission: The thin blue lie 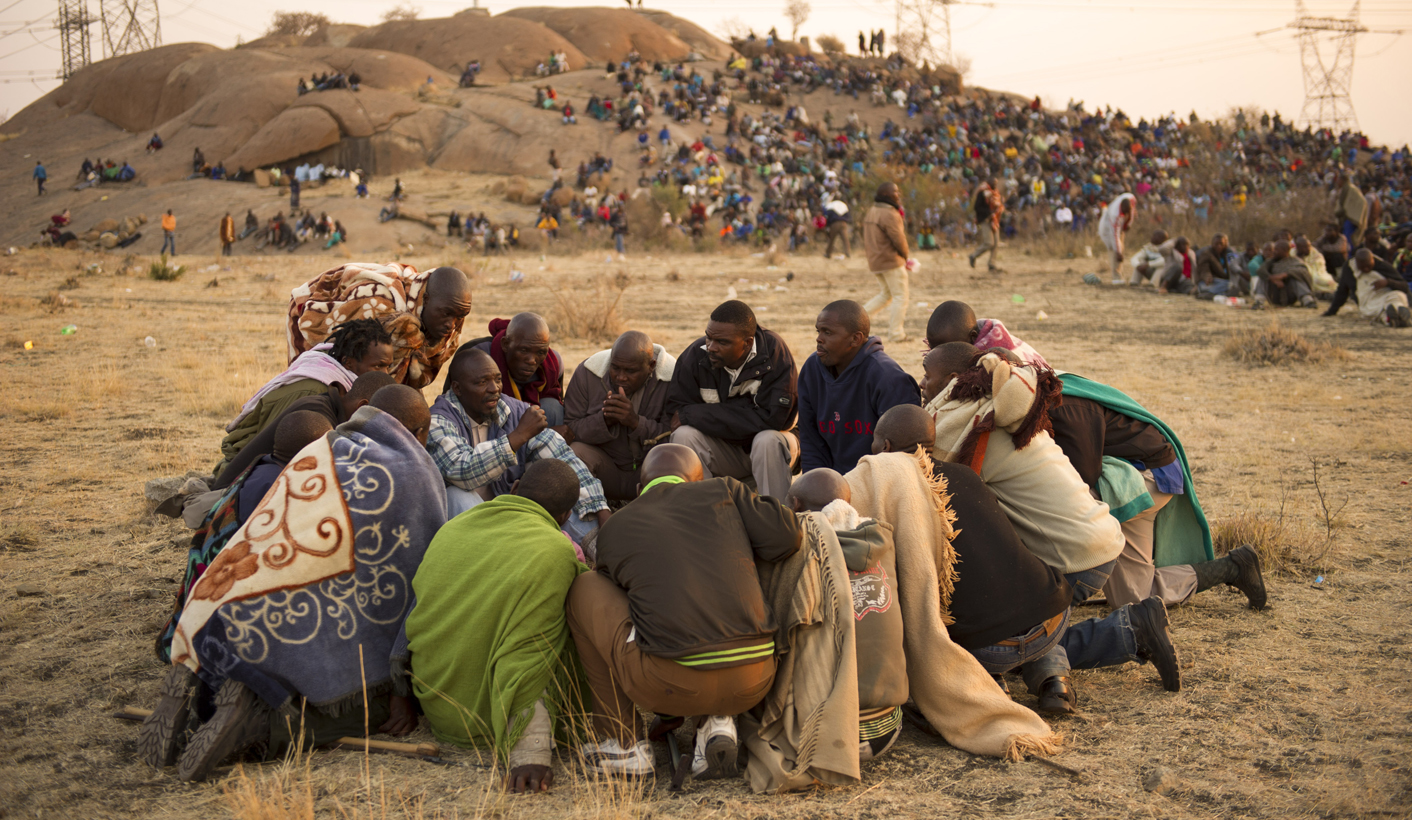 As the final days of the Marikana Commission of Inquiry draw to a close, and a disputation of lawyers encapsulate their work over the last two years, GREG MARINOVICH reports on what has changed from 2012 until now.

Actually, the collective noun is an eloquence of lawyers – my mistake in that previous sentence. Lawyers, and especially advocates, certainly are persuasively spoken. For two years, we have been treated to their command of the language of the law, and their wit.

And therefore the pace of the Commission has been problematic. There has been a contention that justice delayed is justice denied. And certainly it has been galling to some victims’ families that no one has been charged with any of the 44 murders that took place from 10 – 16 August 2012.

That is not quite right, however. In the immediate aftermath of the massacre, police arrested 276 strikers whom the prosecuting authorities charged with the murder of their own 34 colleagues. The rationale was that the miners should have foreseen the possibility that their strike would lead to the police shooting the miners and therefore they were actually the criminally liable ones.

The charges hung over the heads of these miners for months, and they underwent several court appearances before the charges were withdrawn more than a year later.

But it is true that until today, not a single policeman has been charged with murder, attempted murder or culpable homicide. The autopsy reports, and the witness statements of both miners and police make it clear that the 34 who died at the koppies on 16 August were killed by the police. It just remains to be determined whether their killing was lawful or unlawful.

The rationale has been that prosecutions should not usurp the Commission’s work. That etiquette did not extend to the miners. Daily Maverick has previously reported on police arresting and torturing strike leaders, even as the Commission was underway.

Meanwhile the police have spent months using crime intelligence operatives, informers and the extremely dubious testimony of Mr X, the police’s striker-turned-informant, to get the evidence they need to find who killed some of the other strikers as well as two policemen and two security officials.

Of those 44 people who were murdered in that week, the police have admitted to killing 36. There is contention over just who is responsible for the death of the 37th man on 13 August – Mr Tembelakhe Mati. There is a point of debate between pathologists as to his being stabbed with a spear and hence killed by a fellow miner, or being shot by a police bullet.

And from among the striking miners, some of them are responsible for the other eight deceased. Of course, the miners and their lawyers have been loath to accept any personal responsibility, as one can expect. But they have accepted that these deaths were caused by miners and that the individuals found guilty should face the law.

Which brings us back to Mr X, the not-so-mysterious secret police witness. His explosive and gruesome testimony of how he and strike leaders killed people initially seemed extremely damaging to the strikers. Yet once his testimony was put under scrutiny, it was obvious that he was not at many of the places he put himself. These details were critical to the police case: that he was there and took part in the killing of the police officers in the clash with miners on the 13th. Yet he got so many key points wrong that his evidence in that regard has been dismissed by all.

Mr X claimed he was one of the fifteen strike leaders, referring to himself appearing in my own images from the day before the massacre as well as in police footage from the 13th. In both cases, however, the people he pointed out were identified as others by the evidence leaders.

The police had put a lot of stock in Mr X’s evidence, yet the evidence leaders and other lawyers of various parties made it clear that all of his testimony had to be disregarded because of the obvious lies he told, placing himself where he patently was not. (Aside: Many have worked out exactly who Mr X is, but we cannot publish his name, due to the restrictions imposed by the Commission. In many ways, it does not matter who he is, however, since his evidence has been discredited.)

This leads us to the ‘why’. Why would a person incriminate himself in several murders if he were not involved in at least some of them? That is a mystery that will not be solved any time soon.

Some of the lawyers, while dismissing Mr X’s testimony at the Commission in their closing arguments, have been at pains to say that they are sure the police’s lead counsel, Ishmael Semenya, could not have been involved in concocting the false testimony.

It is clear that the police put the witness up to the lies, to bolster their case against strike leaders. Now, what is interesting to us lay folk who do not know Semenya as well as his colleagues, is that they feel they can put so much faith in his integrity. It is clear to all, and has been forcefully put at the end of the Commission, that the police have been feeding Judge Ian Farlam and the public a series of lies for over two years now.

The first lie was when Lonmin, led by Human Capital director Barnard Mokwena and the police, apparently colluded in the days ahead of the press conference to ensure the so-called D-Day could take place, and lead to the strike being broken. The key nexus to be proved by lawyers for the victims and their families is that the police were acting at the behest of Cyril Ramaphosa, then a shareholder and director of Lonmin.

Lonmin and Ramaphosa are trying to show that they at all times acted in good faith, under intolerable conditions of violence perpetrated by the strikers. We will discuss Lonmin and Ramaphosa in detail in another story; suffice to say that Dali Mpofu, acting for the surviving and arrested miners, told the Commission that if Ramaphosa is not to be charged with murder, then no-one should be charged. For now, let’s concentrate on the issue of police fabrication and the suppression of evidence.

Lawyer after lawyer has said that the police have maintained a campaign of lies. The lies began with deceptive press conferences in the immediate aftermath of the massacre, but the big lie began when all the police involved in the operation gathered at the so-called Roots conference to ‘streamline’ their narrative.

For nine days, top officials, lawyers and all the cops involved told what they had witnessed, and had it massaged. Little of this would have easily emerged if not for the evidence leaders uncovering that there was a hard drive containing all the raw data and information in the police’s possession, as opposed to the hard drive they handed in to the Commission.

This hard drive revealed a lot of information that helped lead to the unravelling of the police’s claim of acting in self-defence. A key video pulled together by the University of the Witwatersrand’s Centre for Applied Legal Studies has shown that the sequence of events that police give for the videoed shooting at Scene 1 are quite simply false. The more likely conclusion is that the men who were cut down were trying to get to the safety of the shacks once the police operation began.

Just where the blame and responsibility for this should lie is debatable – was it part of a plan to kill miners as punishment and revenge, or was it just a poorly planned operation that went further awry at each step?

The killings that followed, when police hunted down cowering miners at Scene 2, is altogether another situation, with no ambiguity at all.

It has proved exceptionally difficult for the vast majority of journalists and the public to be skeptical of the police and of the voices of the state in all matters pertaining to Marikana.

Given South Africa’s history of a morally corrupt state, fortified by a partial and illegitimate, though legal, police force, the faith placed in the utterances of these institutions is astonishing. Despite many of us having lived through generations of double-speak, false legitimacy and the outright lies of a state that served only to benefit a narrow portion of society, and police empowered to enforce that discrimination, it seems we have been only too eager to swallow official lies once again.

The Commission has also revealed that most of the poor and formerly disadvantaged portions of our society have been quick to comprehend that big capital, here given form in Lonmin, are almost always antagonistic towards the working classes. It has also shown how the mega-companies work hand in glove with the ruling party (and its anointed unions) and its deployed cadres to ensure maximum profits, at any cost.

What Marikana and the Commission have shown is that while the complexion of the state and its organs may have changed, it is still not trustworthy. The police and state line about the Marikana massacre has been shown to be a lie, and they must be held to account. D