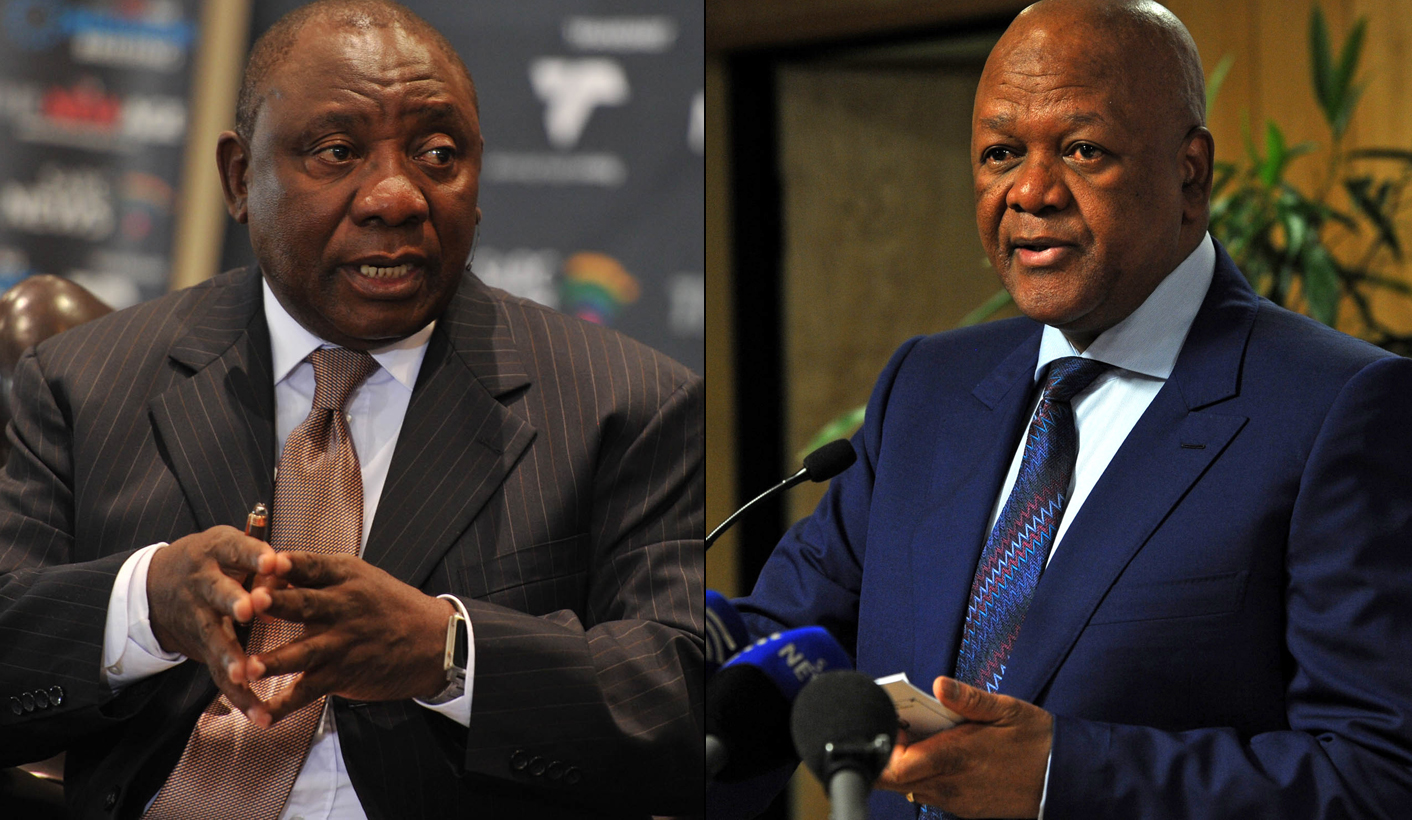 President Jacob Zuma has been away in Brisbane, Australia, attending the G20 Summit – not that his absence has been felt. South Africa generally runs on autopilot, even though it is crying out for strong leadership. Zuma’s public appearances, particularly inside the country, are few and far between, and generally contained to prevent the president from receiving nasty surprises. While Zuma has been lying low – both due to the scandals haunting him and ill health – his deputy Cyril Ramaphosa and Minister Jeff Radebe have stepped up to fill the void. For people trying desperately to look like they don’t want the top job, they are not doing too badly as substitutes. By RANJENI MUNUSAMY.

It is quite rare in South Africa for a senior member of government to announce they plan to do something and actually deliver on that promise. Minister in the Presidency Jeff Radebe was deployed by President Jacob Zuma as a special envoy to Nigeria to assist with the repatriation of the mortal remains of those killed in the Lagos building collapse over two months ago. Since the guesthouse attached to the Synagogue Church of All Nations collapsed in Lagos on 12 September, there have been endless delays and frustrations with repatriating the bodies of the 85 South African victims.

When Radebe addressed the media less than two weeks ago, he gave an ambitious undertaking that he would engage with the Nigerian federal government as well as the Lagos state authorities to expedite the repatriation process. He travelled to Lagos last week not knowing when the authorities in Nigeria would release the remains of those positively identified.

Early on Sunday morning, Radebe was standing on the tarmac at Waterkloof Air Force Base in Pretoria as the huge cargo plane carrying 74 of the bodies landed. He did what he undertook to do in a matter of days. Eleven bodies are still outstanding but Radebe said the government team still in Lagos would continue to work to have the remains identified and repatriated. His commitment is believable because of what he has already pulled off.

Radebe is the longest serving member in Cabinet and although he has been there 20 years, has not been a particularly noticeable or outstanding leader in government. But since becoming the Minister in the Presidency in charge of Planning, Monitoring and Evaluation, he has somewhat of an elevated status and is playing a more prominent role in the affairs of government.

He is also playing the role of the chief spokesman on government, which was originally meant to be the Minister of Communications, Faith Muthambi, when government was rearranged in May. However it was quickly evident that Muthambi has neither the skill nor the gravitas to be the voice and face of government. Radebe has slipped proficiently into the role.

Still he battles to fill the void that only a president can in times of national distress. When South Africa’s national football captain Senzo Meyiwa was shot dead last month, the Presidency issued a two-paragraph statement expressing Zuma’s “shock, sadness and outrage”. There was no direct word from the president to indicate that something extraordinarily horrible had happened in the life of his nation.

Radebe delivered the eulogy at Meyiwa’s funeral but the moment was bigger than him. The crowd in the stadium felt it and sections started making the substitution sign as Radebe was speaking. The occasion called for exceptional leadership to soothe the nation, but none was forthcoming.

Radebe’s name is now coming up in talks about the succession battle in the ANC. He certainly has the seniority and seems to be in Zuma’s good favour – for now.

However, the person to beat remains Deputy President Cyril Ramaphosa.

It is difficult to believe that Ramaphosa has never been in government and has been absent from active politics for about 18 years. He has taken to his role like the proverbial fish to water and appears to be about the busiest person in government. Apart from mediation roles on the continent, Ramaphosa’s schedule is packed with engagements with sectors and having to step in when the president is not available.

He has also met all his obligations to appear in Parliament and attends sittings of the National Assembly even when he is not required – like he did during the heated session on Thursday during which the Nkandla report was adopted. Ramaphosa has had to step in to defend Zuma’s absence from Parliament when he came under fire from the opposition about the president dodging accountability. It was one of the few occasions Ramaphosa lost his cool in public – clearly because the issue is so loaded and possibly because he does not know himself when Zuma will actually return to Parliament to answer questions.

The cloud still hanging over Ramaphosa is his role in the Marikana massacre. His clean image has taken a battering as a result of his intervention on behalf of the Lonmin mine to get senior government leaders to take strong action against the striking mineworkers. He took a pounding from the workers’ legal representatives when he appeared before the Marikana Commission of Inquiry, who have since called for him to face criminal charges for instigating the massacre of 34 mineworkers. Advocate Dali Mpofu, representing the injured workers, also wants to make a case at the International Criminal Court.

The nature of Ramaphosa’s role in the massacre will be defined when Judge Ian Farlam presents his report on the commission in March. However, since Farlam’s findings are not binding on the president, whatever that might be will probably not have long-term consequences for Ramaphosa. And whatever the outcome, it is unlikely to have a bearing on the ANC succession battle.

Ramaphosa is meanwhile projecting the image of the steady hand holding the steering while the driver is asleep at the wheel. He is working hard and gives the image of someone composed and reliable as the country navigates through rocky terrain. On Sunday, for example, he was in Lichtenburg in the North West early in the morning to address a Youth Development Expo, dealing with issues such as self-employment, access to training and healthy living. In the afternoon he was back in Pretoria to speak at the repatriation ceremony at Waterkloof Air Force Base.

In his address, Ramaphosa was certainly statesman-like.

“The people who perished in that tragic event in Lagos, Nigeria on 12 September were not mere statistics. These were people who lived among us. They are South Africans. They are a part of us…

“The collective thoughts and prayers of the entire nation reach out to the bereaved families as you prepare to lay to rest the remains of your beloved ones in various parts of our country. The entire nation is with you at this traumatic moment. The South African nation stands ready to offer a hand in this hour of need,” Ramaphosa said.

He made the effort of going to offer his sympathies to each family attending the ceremony. His and Radebe’s efforts have displayed just how much the South African government went beyond the bounds to assist the victims and families of the Nigeria building collapse.

Unchallenged, this is a good story to tell.

But it is not only in government that Zuma is failing to provide leadership.

The ANC is essentially run by the secretary general Gwede Mantashe and since the election period, Zuma has not played much of a visible role in the affairs of the party. It was left to Mantashe to respond to the ructions in COSATU last week following the expulsion of metalworkers’ union Numsa. Numsa has accused Mantashe of being behind the battles in COSATU and engineering their exit from the federation. Ramaphosa was part of the ANC task team mediating the crisis in COSATU and could also not address the matter in a dispassionate way.

The only person who could have had the ability to pull things back in COSATU and prevent the ANC’s alliance partner from effective self-destruction was the senior most leader – provided it was not Zuma. Zuma had nothing to say on the matter, despite the crisis possibly having major consequences for the ANC and its relationship with workers.

It is clear now that Zuma is on his way to becoming a figurehead both in the ANC and government. This is completely undesirable for a country in need of strong leadership. While he is unwilling, unable and in all likelihood incapable of leading, Mantashe is running the party in grumpy uncle mode and Ramaphosa and Radebe are having to constantly come off the substitute bench to make it appear that there is leadership in the state.

There are still three years to go before the ANC has to contend with a change of leadership. Until then, South Africa remains a ship adrift. DM