The killing of Anni: Call for dismissal, a game of courtroom poker 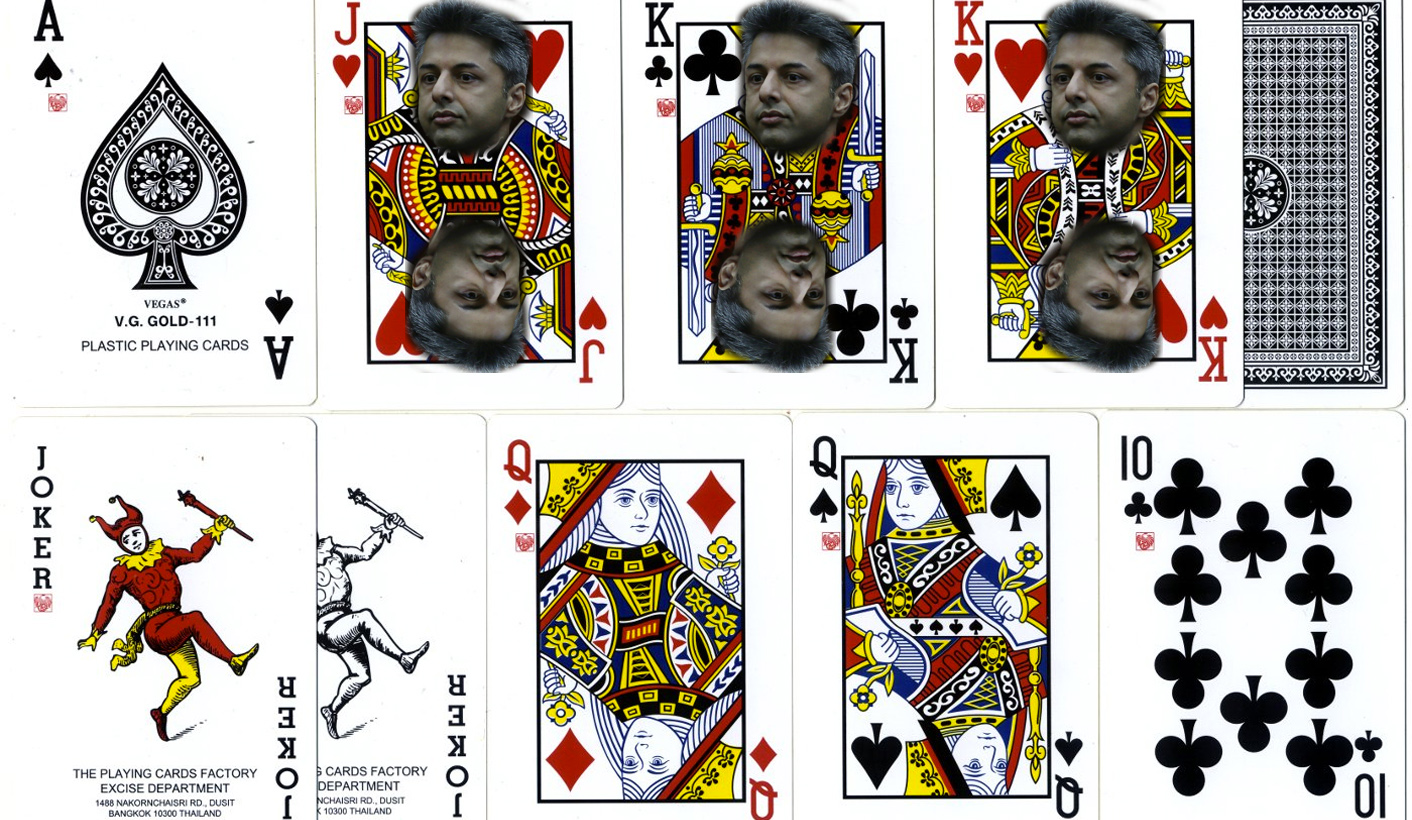 By Monday next week murder accused Shrien Dewani and his legal team should be able to gauge whether the Bristol businessman will soon be a free man or whether the court still has questions and doubts about his alleged involvement in the killing of his wife Anni. It has been a costly trial for the state and one that has placed the country in the international spotlight. By MARIANNE THAMM.

Shrien Dewani’s heavyweight legal team is clearly feeling bullish. At the close of the state’s case yesterday – with more of a whimper than a bang everyone present agreed – Dewani’s senior counsel, Francois van Zyl, informed Western Cape Deputy Judge President Jeanette Traverso that an application for a dismissal of the charges under section 174 of the Criminal Procedure Act would be made on Wednesday.

Van Zyl told the court he would hand in five heads of argument suggesting that the state had failed to present enough evidence to secure a conviction on charges that Dewani had conspired with four others to have his wife Anni murdered in a staged hijacking on 13 November 2010. Dewani has maintained his innocence and has claimed that he and Anni were victims of a conspiracy by four South Africans who planned either to rob the honeymoon couple or take his wife hostage and hold her for ransom.

Western Cape Deputy Director of Public Prosecution, Adrian Mopp, told the court he would submit the state’s responding heads of argument by Friday. On Monday both teams are expected to argue their points in front of Judge Traverso who will, depending on whether she feels she needs more time, either rule in favour of the dismissal or ask for more time to consider her verdict on this matter.

Opting for the latter would present two possible scenarios. The judge could later rule in favour of a dismissal of charges in which case Dewani would be a free man four years after the murder of his wife and having survived a gruelling seven weeks of scrutiny in the dock of the Cape High Court where the his life as a secretly bisexual man would have been exposed to millions.

However, Traverso could also rule that the trial proceed in which case the defence would need to continue its case and call further witnesses. This would hint to the fact that the judge might not be satisfied that the state’s case, while it certainly appears weak, is not entirely without merit.

It is unclear, at this stage, whether Dewani himself would take the stand should the judge rule that the trial proceeds. Several legal opinionistas, quoted mostly in the British media who have also been generally highly critical of the state’s case, have suggested that Dewani’s precarious mental state would militate against his taking the stand. While Dewani does not have to prove his innocence, a refusal to submit himself to cross-examination, however, might be viewed negatively.

There is no doubt that the state started off on the back foot when Dewani’s defence, on the first day of the hearing, acknowledged that Dewani is bisexual, thus removing any attempt by the state to locate a motive or intention for the killing in referring in any way to Dewani’s sexual orientation.

Crucial evidence that the state had also hoped to lead about the relationship between Dewani and Leopold Leisser, aka The German Master, an escort Dewani had paid for sex, was also deemed inadmissible, striking a further blow. The state then had to rely, in part, on the evidence of Dewani’s three surviving alleged co-conspirators, driver Zola Tongo, one of the hijackers, Mziwamdoda Qwabe, and middleman, Monde Mbolombo.

While all three men gave at times conflicting evidence riddled with inconsistencies, they all maintained that Dewani had been the mastermind and had ordered the hit on his wife for R15,000. Evidence by all three men sketched a picture of a haphazard and chaotic murder plot where the killers scrambled to find a gun and pair of yellow latex washing-up gloves on the day of the murder. They had also missed their planned rendezvous with Tongo and the couple as they had had trouble getting transport to the designated location in Gugulethu.

While Mngeni was sentenced to life imprisonment for pulling the trigger of the gun that killed Anni, evidence was led that gunpowder primer was found on the web of the glove worn by Qwabe on the night of the murder. This evidence was never presented, the court heard, at Mngeni’s trail, as it had been “overlooked”. Qwabe, however, maintained that Mngeni had been the shooter and that the gun had gone off accidentally.

Mbolombo, who admitted to playing a greater role in the murder plot than had he originally stated, said that the men had not discussed exactly how or where they would kill Anni. Tongo too testified that the men had not discussed this vital aspect of the crime during their meeting on the Saturday morning prior to the murder. The men had also not discussed how the alleged R15,000 Dewani had offered for the hit would be distributed among them and Tongo told the court he had also not discussed with Dewani how he would receive his R5,000 cut. Mbolombo too had not arranged with Tongo how he would receive his R5,000 share, the court heard.

Evidence by a series of low-level police officers who initially dealt with Dewani and Tongo before the Hawks stepped in, spotlighted a shocking incompetence with lost pocket books, incomplete statements and dodgy ballistics reports, including that some of the evidence had only been gathered a month before the trial – the measuring of convicted gunman Xolile Mngeni’s arms only a few days before he died – to prove that he had shot Anni from the front passenger seat as the state maintains.

Throughout the trial Traverso has admonished the state, pointing out that the Hawks and the NPA have had four years to prepare for this high-profile trial and that they were wasting the court’s time with unnecessary and costly delays in terms of submitting reports, timelines and presenting expert witnesses.

The state’s strongest witness so far has been the Hawks’ Captain Paul Hendrickse, the investigating officer. While the defence claimed Hendrickse was biased and too close to Anni’s family, it was towards the end of the veteran policeman’s testimony that the first cracks in the defence’s version were revealed.

While Dewani’s legal team has been able to offer an apparently plausible explanation for the numerous phonecalls and SMSes between Dewani and Tongo from the moment the couple arrived in Cape Town up until and after the murder, as well as their interactions captured on CCTV footage, Hendrickse highlighted two crucial issues that would have altered his investigation from the start.

The policeman testified that his suspicions about Dewani had first been aroused when, the day after the killing, Dewani had phoned police to inform them to look for Anni’s expensive engagement ring in the “stitching” of the back seat of the VW Sharan where she had hidden it. The previous night Dewani had told police that he had handed the rings to the hijackers while pleading for their lives and to be let go.

That Dewani had also failed to mention to police that Anni had been carrying R10,000 cash in her handbag on the night of the murder – money that Tongo would have known about as he had escorted Dewani to a black market exchange earlier in the day – aroused further suspicion, said Hendrickse. The policeman said he would have immediately questioned Tongo.

The obvious question that remains is why Dewani would have omitted this crucial piece of information. Was it to deflect attention from his co-conspirator so soon after the murder and when everyone would have been in a state of high anxiety? Mentioning the money would have provided police with a plausible motive for the robbery and hijacking.

Dewani maintains the money was meant for a surprise helicopter trip for Anni that he had asked Tongo to arrange. Dewani also never mentioned the proposed trip to police or in any other version he offered including to Anni’s family when he returned home after the killing.

While Adrian Mopp and his co-counsel, Shireen Riley, are not prone to the courtroom theatrics the country witnessed from Gerrie Nel during the Oscar Pistorius trial, the team have been decidedly lacklustre in their leading of evidence. Both have essentially spent their time in court painstakingly leading witnesses through their testimony. They have seldom objected to Van Zyl’s line of questioning or emphasised information that would strengthen their case.

On Monday next week one hand in this legal game of courtroom poker would have been revealed. If Dewani walks because of a lack of evidence, justice would have been served in a practical sense but our police services would have been exposed to humiliating international scrutiny. And while three South Africans have been found guilty for their part in the murder we, and Anni Hindocha’s family, might never learn the truth about why and how she met her callous and horrific end in a foreign country. DM