Power Down: Baleka Mbete’s rough ride with the real 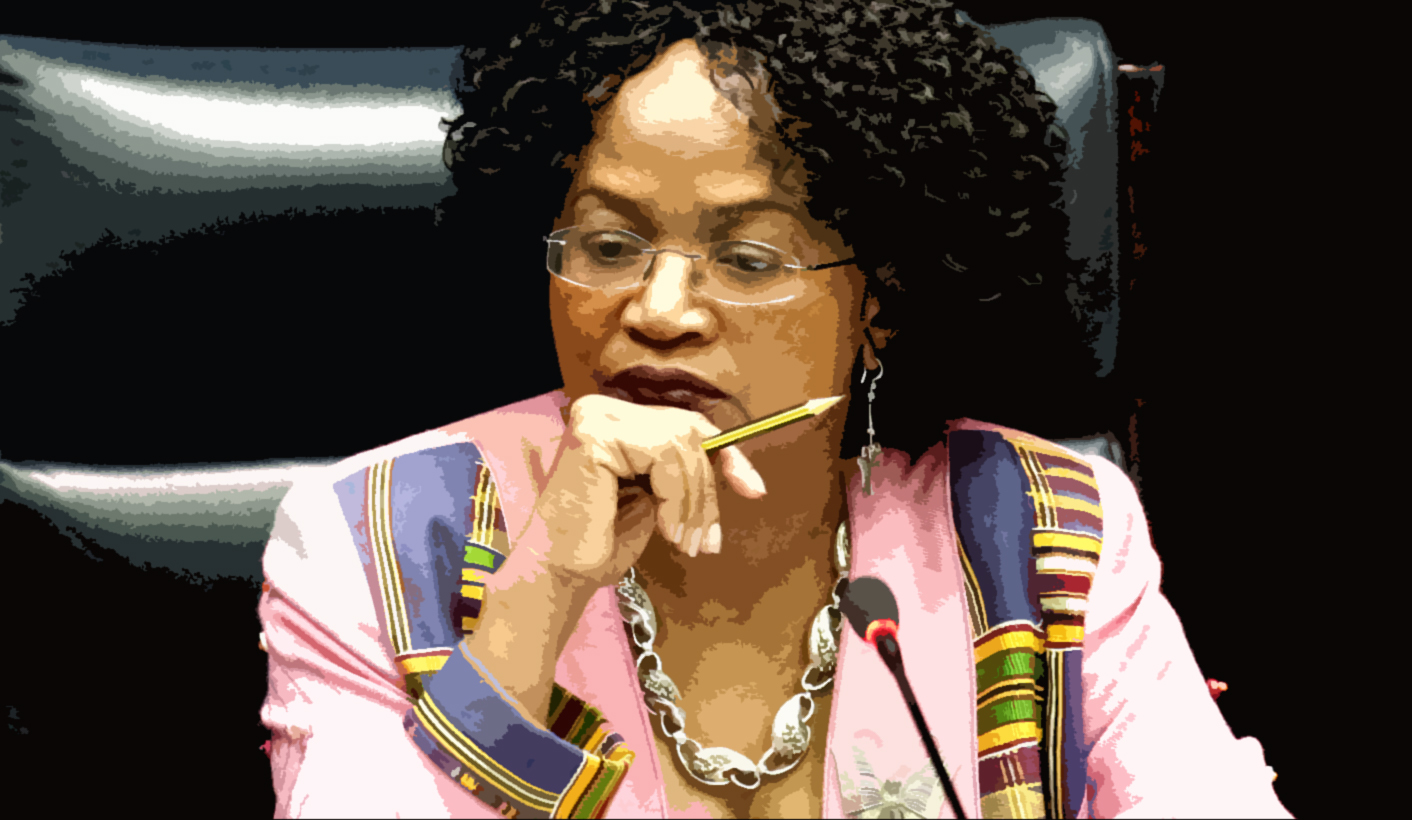 What’s happening inside Baleka Mbete’s head? Has Jacob Zuma’s most loyal henchperson reached the limits of her perception? RICHARD POPLAK contends that she has, and her terror and confusion speak to a bigger political reality.

Imagine a mind-meld with Baleka Mbete.

What would we learn, what secrets would be revealed within the airy fathoms of the Speaker’s consciousness? I picture a vast auditorium, and a Jumbotron displaying a close up of Baleka Mbete’s face. Lean in, and notice how the screen is pixellated with further portraits of Mbete: glaring out at the National Assembly like an exasperated parent of ADHD triplets; leaning on a fist during another Parliamentary karate tournament; shouting an order at a throng of riot cops called at her behest. These pixels, down to the smallest sub-atomic particle, are in turn made up of tiny images of Baleka Mbete—images so small that physics is incapable of taking their measurement.

Round the clock, Baleka Mbete’s mind plays only the Baleka Mbete Jumbotron. In this, the Speaker so perfectly articulates the arrogance of power, and so expertly evinces power’s simultaneous self-love and total lack of self-awareness, that she has become the towering figure of our time. Imprint her profile on our coins and fling them at the masses: she is the reigning national icon, an anti-Madiba in an age of calumny.

Over the course of the fifth Parliamentary session, an abomination defined by any number of stories and subtexts and mini-memes, I’d argue that Baleka Mbete has emerged as the primary figure, a Falstaffian hench-fool who ends up stealing the play with her antics. This grim 2014 iteration of the ANC, a parody of a farce of a political party, has found a face, a figurehead. Mbete is so roundly reviled— for her mendacity, for her lap-dog loyalty, for the sheer chutzpah with which she destroys any sense of fair play—that she has become the shadow politician on Plato’s cave wall.

Think of all she’s achieved. In order to protect the President of South Africa from Evil Questions, she has literally destroyed Parliament. The opposition parties, with their hashtag campaigns, their hardhat drumming circles and their financial curiosity, owe everything to the Speaker. Her job is to sit in her high chair and shunt Parliament through its cheerful pantomime. When the president is threatened, she must simply bump the proceedings along to the next item on the agenda. If he is threatened again, she must bump some more, until she’s shunted us all into a rambunctious ersatz democracy that isn’t a democracy at all.

Think about the expression on Baleka Mbete’s face the first time the EFF insisted that Jacob Zuma pay back the money for the upgrades on his famous homestead. She looked like she was negotiating two separate plains of reality. The first—the plain on which power remains forever unquestioned—sees Mbete serene in the knowledge that this nonsense will shortly die down, and the idiots in the red jumpsuits will be dumped off Cape Point. But one also senses a different reality knocking on the edges of her consciousness: the initial unlovely hint of entities outside of herself. So it goes with power’s essential infantilism—there is nothing else but power, and no one else but those who feed the powerful.

Suddenly, in the underwater gloom of the ANC’s netherworld, Mbete heard noises from another realm. They confused her. The challenge made no sense, because nothing else exists but Baleka Mbete and those that think and feed like Baleka Mbete. So the logical next step was to call in the brown shirts. The cops came into Parliament, and the security cluster was enlisted to remind those in breach of Parliamentary “decorum” that decorum is the only thing Parliament is for.

Committees were instituted—committees that saw things much the same way Mbete did—and handed down suspensions. And while further hashtags insisted that #BalekaMustGo, that simply wasn’t possible, because power had ordained the Speaker to sit in her chair and preside over Parliament. Her position could not be questioned, because then everything could be questioned. Mbete, after all, could not un-think herself, any more than matter can make itself disappear. She was not in a “quandary”, as some in the media insisted. She just was.

Then came the great battle of last week. Much like the previous gong show, Mbete did not want opposition parties asking questions of the president, and her obfuscations drew the now-expected showdown. This time, we did not see the spark of terror in the Speaker’s eye. In private, we can only assume that she worked through her usual facial expressions—faux boredom, real exasperation, genuine lack of genuineness. But this time, was there fear? One thing is certain: the other reality was prodding the Speaker with relentless urgency; someone was taking a boot to her unconscious.

When Cedric Frolick called for it, the sergeant-of-arms was summoned; the cops were called in. They manhandled sparrow-boned DA MPs; they flung their weight about. The feed was cut; the cameras killed: Parliament screens went dark. This was a literal depiction of what was happening in Baleka Mbete’s brain: she could no longer see only herself. The revolution, it turned out, would not be televised. And make no mistake—when the men with guns enter Parliament, the revolution has, in fact, begun.

Like any revolution, this one is actually a gazillion small revolutions occurring at once. Perhaps the most interesting, at least from a dramatist’s perspective, is the one going on inside Mbete’s mind. I don’t, of course, know exactly what she’s thinking, but I think eons of literature and psychology and HBOs Veep have given us enough pointers—power dims when it begins to un-imagine itself. The violence that comes in the wake of this can be, and has been, considerable—that little fistfight was but a taste.

As each and every one of those Baleka Mbete pixels go dark in Baleka Mbete’s head, the fear and terror and confusion will be an exact representation of what is happening in the minds of all of her powerful friends.

Our job as citizens is to help them go quietly into the subsequent darkness. DM